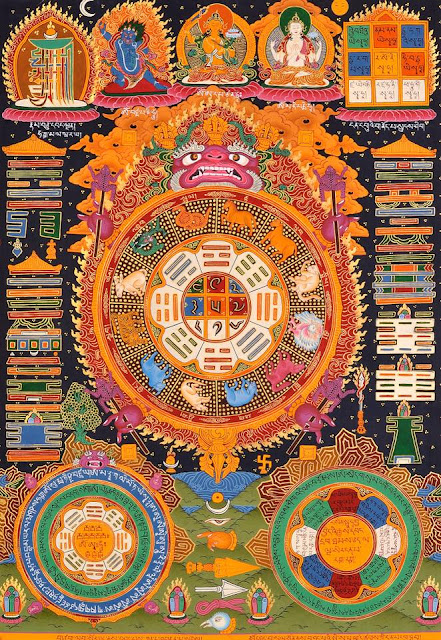 The Sipa Khorlo is an astrological chart with instructional tool and an auspicious talisman that brings good fortune.

The central figure is a yellow tortoise, emanation of Manjushri, lying on its back with various diagrams drawn on the flat stomach of the shell.

The head is at the top and four limbs protrude from the circle of the body each holding a stick with an impaled corpse.

The figure is surrounded by the flames of wisdom and is placed above a pond of blue water.

In the inner circle are the Tibetan numerals one to nine arranged into a 'magic square', known as the nine mewas, with the number five at the center and the other eight numbers arranged around it so that their digits add up to fifteen horizontally, vertically and diagonally.

The middle circle is composed of the 8 trigrams (Parkha Ge) of Chinese origin displayed on a blue wheel atop an orange background.

The eight diagrams or parkha represented by the name of elements. Each of the 9 Mewa numbers corresponds to trigrams.

According to Tibetan Astrology, all material on this Earth are composed of five elements Wood, fire, earth , iron and water.

These elements can be further classified either into seven or eight elements. Wood, fire, water, iron, space, wind and mountain. When we add the earth element to the above list, then it becomes eight element.

The process of bringing together these eight into the five elements involves combining space and iron, likewise, wind with wood and mountain falls under the earth element.

However, in this system parkha, space mountain and wind are brought under earth element, i.e., due to the actual position of the eight elements.

SOUTH: The number is 9, corresponds to the fire element. Its trigram is called LI

NORTH: The number is 1, correspond to water element and the trigram is KHAM

EAST: The number is 3, correspond to Wood element and parkha or trigrams is ZIN

WEST: The number is 7, to the metal element and trigrams.

The trigrams consisting of three lines and it is given in figure. Individually they are name, Earth, Iron, Space, Water, Fire, Mountain, Wood and Wind.

Outside the animal-lotus circle is fire fence.

The head, tail and four limbs of the tortoise emerge from the shell. His ferocious head is crowned with three half-vajras, and another half-vajra seals his tail.

The central half-vajras at the top of his head and tail symbolize the central channel ascending through his body on the 'Brahma-line'.

Two half vajras to the left and right on his head symbolize the lunar and solar channels; the two snake coiled around them represent the merging of these two channels with central channel.

His limbs, pointing towards the inter-cardinal directions, take the form of human hands.

In each hand is a wooden stake on which a frog is impaled, representing the 'four quarters' of the earth element. These four frogs are soil spirits of the earth.

The small outlined squares in each of the four inter-cardinal directions also represent the square bases of the element earth.

Above the head of the tortoise emerges a flame, representing the element fire in the south.

Below his tail is a small triangular lake representing the element water in the north.

To the left and right of his lower hands are drawn a tree and a flaming sword, representing the element of wood in the east, element of metal in the west, respectively.

The symbols of seven great planets and Rahu are representing in a vertical column below the lake at the tortoise's tail.

From the top downwards they are the disc of Sun, the crescent of the Moon; the eyes of Mars; the hand of Mercury; the dagger of Jupiter; the arrowhead of Venus; the fiber-bundle of Saturn; and raven's head of the eclipse planet Rahu.

In the upper left corner is the monogram of the ten-stacked syllables of the Kalachakra mantra. It symbolizes the great wheel of time.

In the upper right corner the nine mewas are arranged in the same magic square sequence of numbers as appears in the center of the tortoise diagram. Short prayers are inscribed on each of the nine squares to protect against the possible occurrence of negative aspects of the mewas.

At the bottom left and right are the two protective wheels of elemental astrology.

On either side of the main tortoise diagram are two vertical stacks of protective talismans, depicting symbols of nagas, earth spirits, mountain spirits, gods and goddesses who influence all divisions of time.

These are composed of protective seals and trigrams formed by the addition of one horizontal line to each of the eight trigrams of the king Wen dynasty.

These create pictographs of each of the eight trigrams depicting the eight elements of fire, earth, lake, heaven, water, mountain, thunder and wood.

Please make a point to have two of this image. One laminate and place it at the entrance door and other with photo frame kept at the altar.