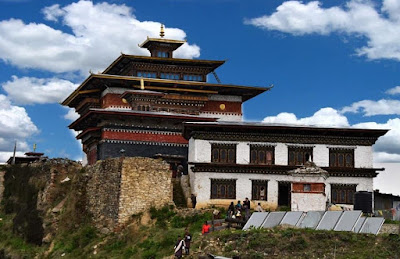 The temple of Dongkar Yösel Tsemo is situated at 3650 metres above sea level.

Terton Tshering Dorji while studying under Drupwang Rinchen Chador is said to have seen something illuminate bright on the mountaintop every night, he later than asked a monk to see the place and to the monk's surprise there was a dark statue of Yidam Thongwa Donden floating on the surface of lake which was guarded by the Samba deers. The statue is believed to be one of three that Terton Pema Lingpa discovered from Mebartsho that happened to fly away.This revealed treasure was offered to the treasure discoverer Tshering Dorje whose footprint is preserved in the temple. Because of this, the place is still venerated.

As advised by his master Terton Tshering Dorji founded this temple in the 15th century and made his seat. 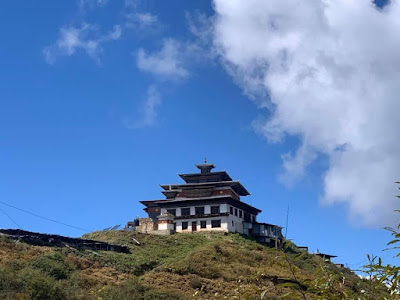 Terton Tshering Dorji in his early life used to live in the lower valley of Paro and as a teenager he used to be wild, breaking the cow's horns and legs. It so happened that one day he and his friend slaughtered one of the cows and having found an unborn calf inside the carcass, he was deeply moved and regretted his doing and then titled to a religious pathway. He was destined to be a Terton.

Since there is also the dwelling house of Dongkar Tsen and it has been said that no one can steal anything from the temple. There had been numerous cases where thieves had tried to steal from the Lhakhang, one of them tried to steal a throe which happens to be a bronze vessel, it is said that he was followed by the guardians terrifying him, and when daylight ended the night, he couldn't make it past the chorten close by. When he decided to leave the relic, his right hand got stuck on the surface and fearing someone would catch him, he cut off his own hand and ran away.

Even to this day the hand covered in leather is stored in the Goenkhang. It is also said that a cup was stolen but mysteriously returned to the Lhakhang on the doorstep.

After descending about ten minutes from the temple there is a blessed water source.

Since so many places can be seen from here, the words of an ancient song say: “From Paro Dongkorla, [both] Paro and Wang (Thimphu) can be seen." 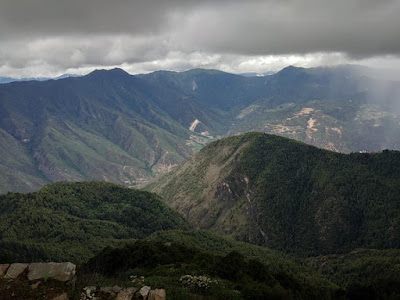 In earlier times, when there were no roads in Bhutan, travel was very difficult. It is said that when the mother of Kuzho Tshering Paljor, the Pönlop (governor) of Paro, was living in Bumthang, he used to send people from Bumthang and, by prior arrangement, the Pönlop used to come to Dongkarla and his mother to Kikila where they each made smoke offerings (so that they could see each others' smoke and feel as if they have met together).

Recently HE Tsugla Lopen performed the consecration ceremony of the renovated Dongkola monastery.

Dongkola is also a metaphor which depicts the height at which a person can rise to and a height to which a devotee can climb.