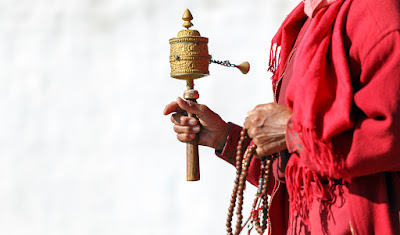 Prayer wheels are an example of Buddhist technology. This technology allowed the faithful to multiply the number of prayers they expressed by millions. This is because prayer wheels are filled with copies of mantras (sacred spells associated with particular deities) such as the mantra of Avalokiteshvara, ཨོཾ་མ་ཎི་པདྨེ་ཧཱུྃ་ཧྲཱིཿ (Om Mani Padme Hum Hri). 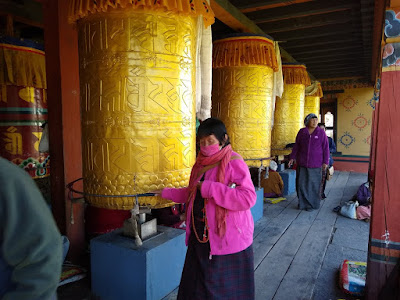 The mantra is printed on very thin tissue paper as many times as possible, in some cases numbering in the millions. The paper is wrapped around a spindle and covered with a protective cylinder. 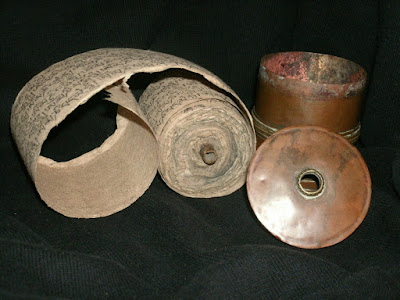 In recent years, microfilm technology has allowed billions even trillions of prayers to be invoked with just one turn of the wheel.

Prayer wheels range in size from small hand-held wheels to large wheels set into the wall of a building, like moveable pillars. 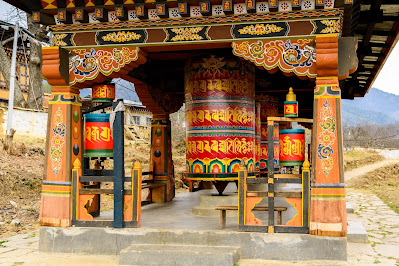 Prayer wheels range in size from small hand-held wheels to large wheels set into the wall of a building, like moveable pillars. They are made to be turned by hand, wind, water or fire power. When part of a temple, people will circle the building clockwise and turn the wheels as they walk. Thus they gain the benefit of circumambulating the sacred building as well as the prayers sent up by the prayer wheel. 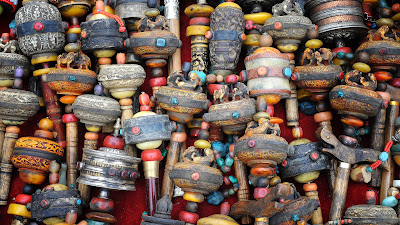 How and why is it used?

Prayer wheels are used by many Tibetans every day, sometimes for hours on end. Worshippers turn prayer wheels to accumulate merit, to help all beings in the world and to purify their karma (intentional actions). They are part of a meditation practice. 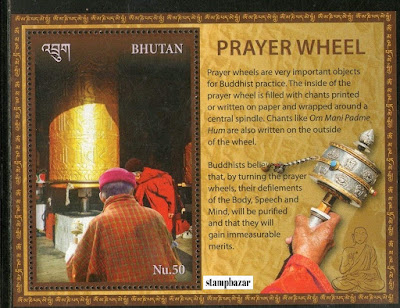 According to Lama Zopa, Rinpoche, “To benefit sentient beings, the Buddhas and Bodhisattvas manifest in the prayer wheel to purify all our negative karmas and obscurations, and to cause us to actualize the realizations of the path to enlightenment.”

Turning a prayer wheel with millions of mantras inside is the equivalent of saying those millions of mantras, but it is achieved in a fraction of the time. Multiplication of benefit is also achieved by prayer wheels powered by wind and water. Whatever wind or water that touches the wheel will become blessed by the wheel and than can purify whatever else it touches of negative karma. 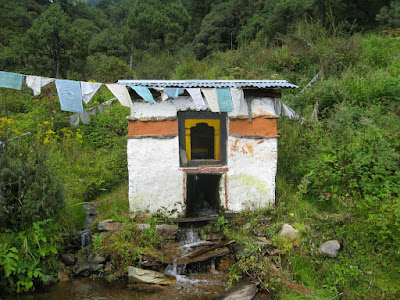 Pilgrims are often seen making their journeys with prayer wheels in hand, or as part of their pilgrimage, they will turn prayer wheels at the monasteries they are visiting. With every turn of a prayer wheel, the deity whose mantra is therein inscribed emanates from the wheel in bodies as numerous as the mantras. For example, if there are one million Manjushri mantras in the prayer wheel, then one million emanations of Manjushri will go forth with each turning of the wheel, and proceed to benefit the beings of the world. However, the benefit of spinning the wheel with a concentrated mind is said to be one hundred thousand times greater than spinning it with a distracted mind. 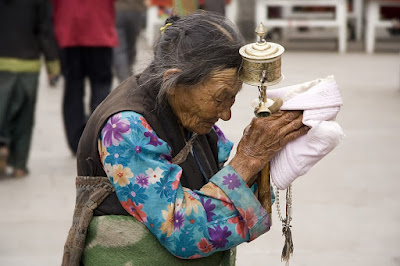