Turquoise, an important gem that connects well with human. 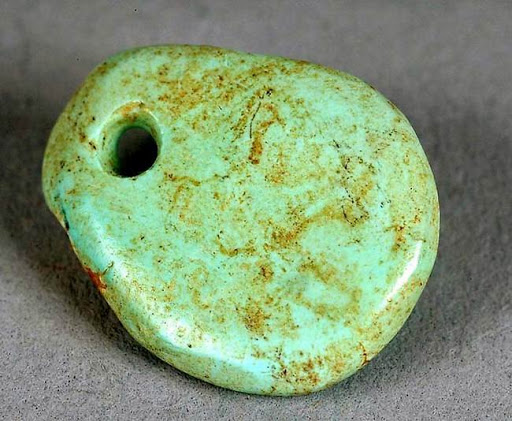 Turquoise is an opaque, blue to green mineral that is a hydrated phosphate of copper and aluminum, with a chemical formula CuAl6(PO4)4(OH)8·4H2O. Turquoise is created by the purification of groundwater through aluminous rock in the presence of copper and the intense underground conditions around the Himalayan Mountain Range. Over many millions of years, the natural process has finally given us a beautiful colour to this gem. 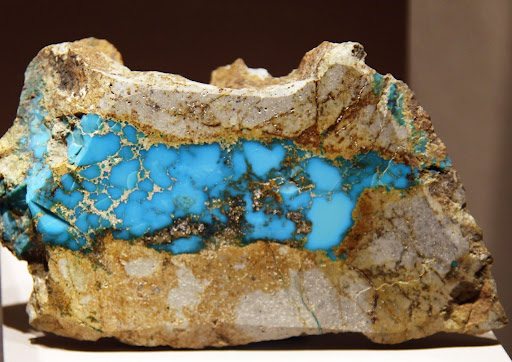 Amongst the many colour ranges the blue-green is the most sought after for the fact thatmost Turquoise found elsewhere inclines more towards the blues. This blue green colour and the gem itself  is a part of a  life to many people in the Himalayan as well as their livelihood. 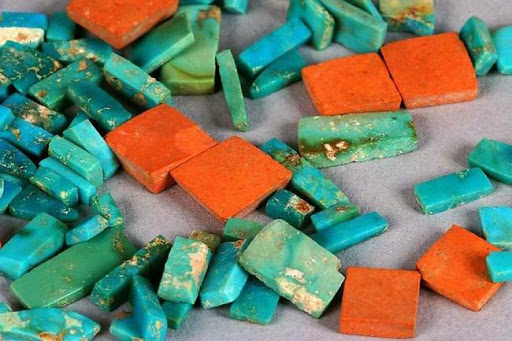 Almost every person living in the Himalayas will have a piece of Turquoise, if not multiple pieces. For them, it’s a very spiritual thing to own, and it’s the most prized gemstone in this part of the world. They believe it is the ‘Sky Stone’ and has been brought to the surface of the earth from the heavens.

Especially, Tibetans have valued the stone since at least 1,000 BC. It has been used as a token of love between people and is thought to protect both the person giving the gem and the person who received it as a gift.

In Bhutanese folklore also there are many tales on the Turquoise. This beautiful gem is also widely used in the country. Be it as a decorative of statutes, religious artifacts, personal jewelries etc. 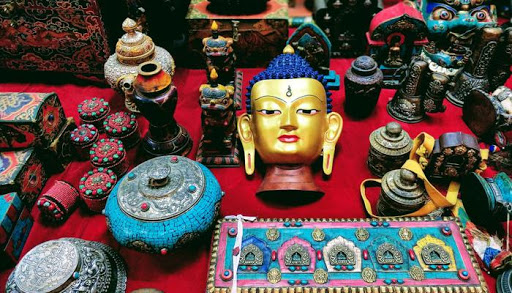 In Tibet, children will always be given a piece of Turquoise jewellery in their early years, and it’s believed this will act as a protector and stop them from falling. (Some of these villages are high in the mountains where fear of falling would be a real and dangerous concern.) 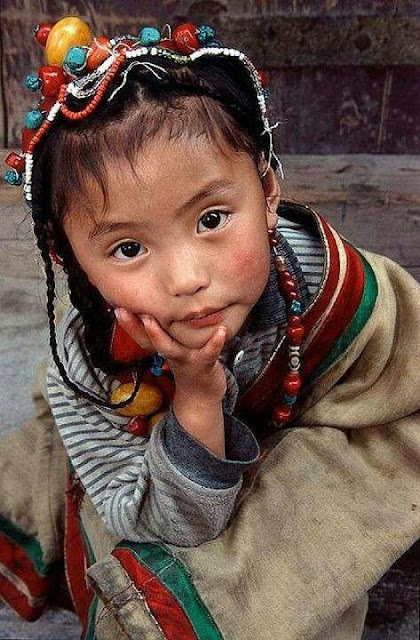 Throughout their lives they will “upgrade” their Turquoise talisman several times for bigger and finer pieces, and seeking a larger and cleaner piece can become a lifelong pursuit, such is the importance of the gem in this culture.

They also believe it will protect the wealth of the family and it can be used for medicinal purposes too, as it has been crushed into a powder for medicine. It is believed that as the gem is porous and can absorb things from its surroundings that a Turquoise can take on a personality of its own. 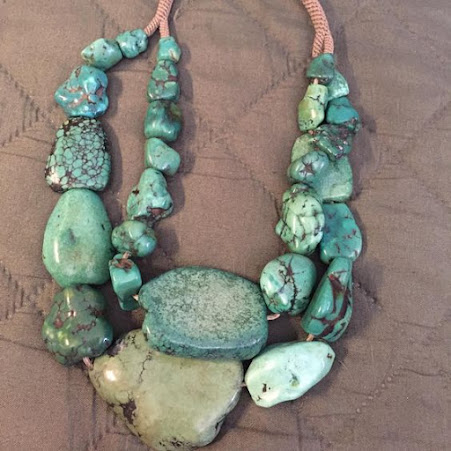 They even believe that as a person grows older it will begin to lose its intensity of colour, and will shift to a more green hue. On being passed down to a younger healthy person the Turquoise is believed to recover its beauty and natural colour. Because of this they treat their gems as if they have their own personality, with affection, and as if the gem were alive. It wouldn’t be a stretch to say that this gem is treated as if it were part of the family and an important part of everyday life. The gem is also listed in several Sanskrit texts as being medicinal.

One of their strongest beliefs is that there are no two gems alike – each one has its own personality, its own look and is distinct from all others. 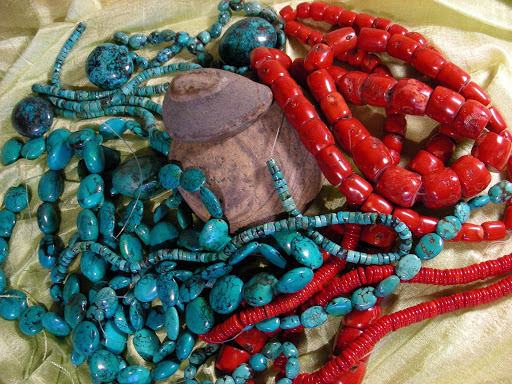 This is a particularly good stone to wear or use if you are experiencing trouble with difficult people or stresses in your life. Ideally it would be worn on your body throughout the day to help protect and heal you. This makes necklaces and earrings the perfect anti-negativity shield.

Many Tibetans believe that a turquoise mala will relay your prayer directly to the deity being invoked. So, it is beneficial, if you use Turquoise mala for reciting Tara mantra. 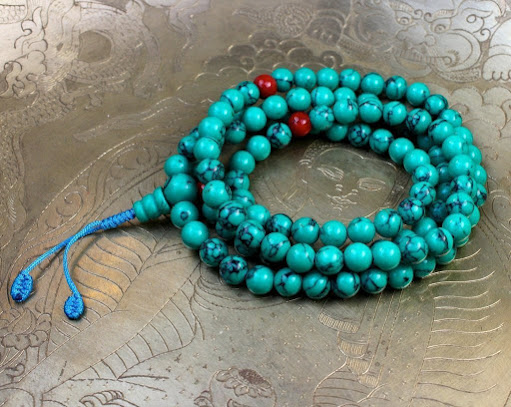 It is very important to Tibetans as well as the people throughout the Himalayas that their personal Turquoise is in its natural state. They feel if Turquoise is altered it does not possess its metaphysical powers and is not able to be in harmony with the human body. 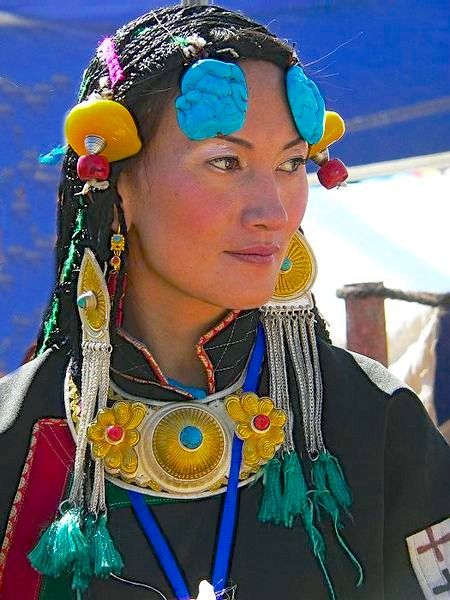 Turquoise is a porous mineral and absorbs oils and body fluids which affect its colour and consistancy when unaltered. Himalayan people recognise that the change of colour in a Turquoise Gem is the direct result of variations in the state of the owner’s health. Turquoise grows paler and usually takes on hues of green as the owner sickens or grows old, it loses its color and intensity entirely at death.

Turquoise will completely recover its inherent qualities and beauty when a new and healthy person possesses it.

Healers and believers in Turquoise feel that Turquoise is susceptible to the personality of the wearer, a gem must be treated with affection and regarded as a sentient being.

It is also believed that Turquoise will bring happiness and good fortune to its owner if it was given by a loving hand, it is sympathetic not only to the wearer’s health but also to the giver.

It is believed that Turquoise will become paler in colour if he or she is threatened by evil.

Turquoise is often used as a token of love by Himalayan people,  Turquoise is presented by a lover to his loved one, its colour will remain permanent as long as the lover’s affection lasts.

Turquoise is highly appreciated by Tibetans not only for preserving the family wealth but also for its ritual and medicinal purposes. "Gyu" (pronounced "yu") is the name for Turquoise to the Tibetans and Bhutanese, it is indigenous and they feel knowledge from the mineral comes from within the Turquoise and not through outside influences. In other words, Tibetans feel that Turquoise Stones have many powers and values within the stone itself. 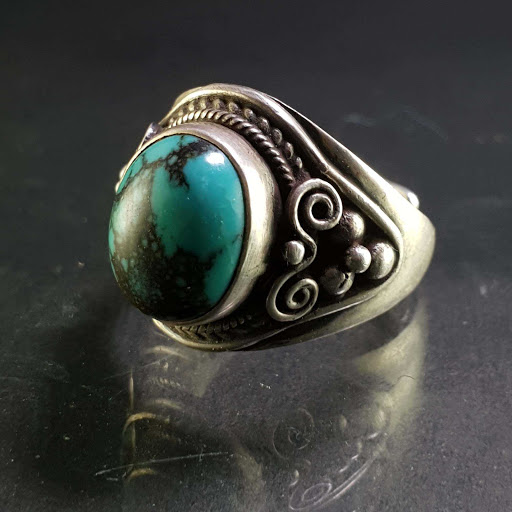 Hope you will keep an original turquoise with you after having explained many things above.Like most other opaque gems, turquoise has been devalued today by the introduction onto the market of treatments, imitations and synthetics.