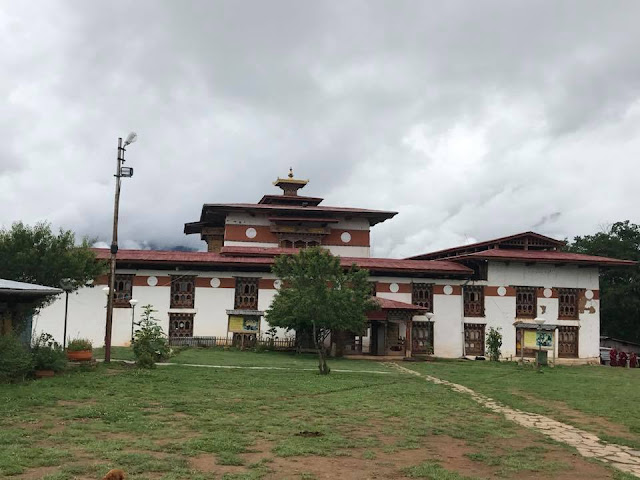 The Monastery is located on top of a beautiful hill which is around 9 KM from Paro Tshongdu. The road is blacktopped till the Monastery. One can really enjoy the bird eye view of Paro valley along with Rimpung Dzong and Paro International airport. As many as 30 dzongs, Monastery and places can be seen from the location. Just imagine how beautiful it is. 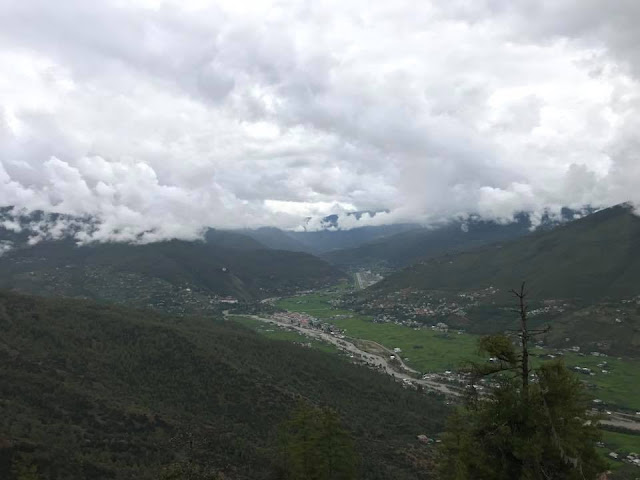 The first thing we saw was the Zamling Chartshuel (Earth formation) monument and a beautiful Stupa standing on a typical hillock. 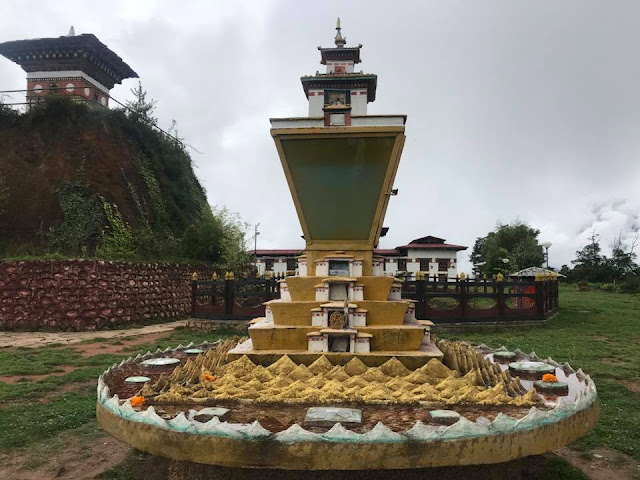 We were taken directly inside the prayer hall. There were more than 100 monks and Umzey observing Yarney (Summer retreat). All were wearing yellow cloth. 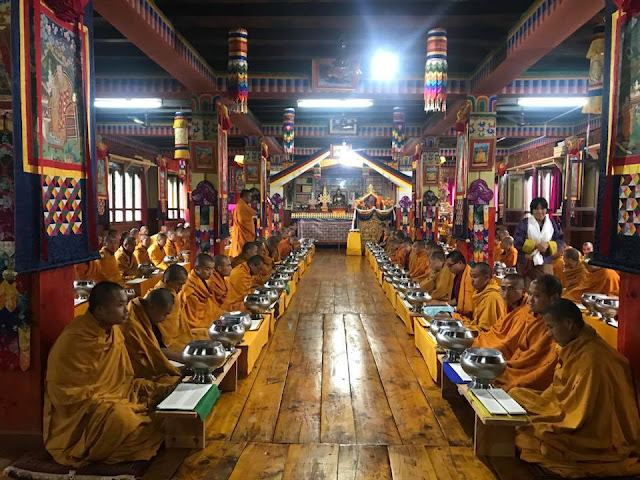 I have offered money for the morning breakfast and received Ngor. It is really holy atmosphere up there. 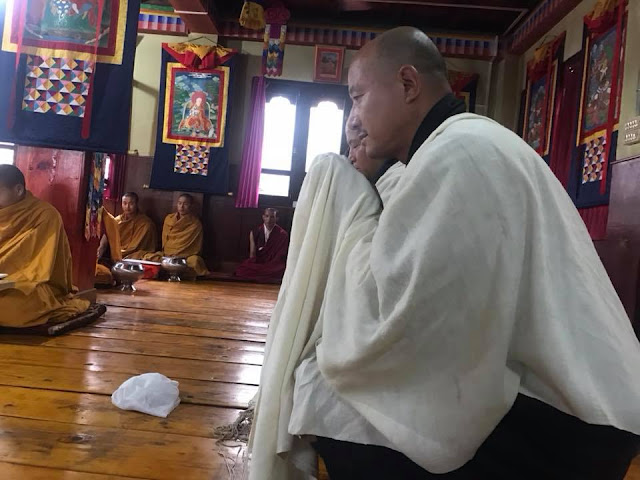 After that we were forced to take lunch. It was vegetarian spread. Felt really awkward to sit and eat while monks served us. Actually it should be the opposite way.

After that we visited the Monastery and received blessing. We were greeted by a bear replica at the entrance. 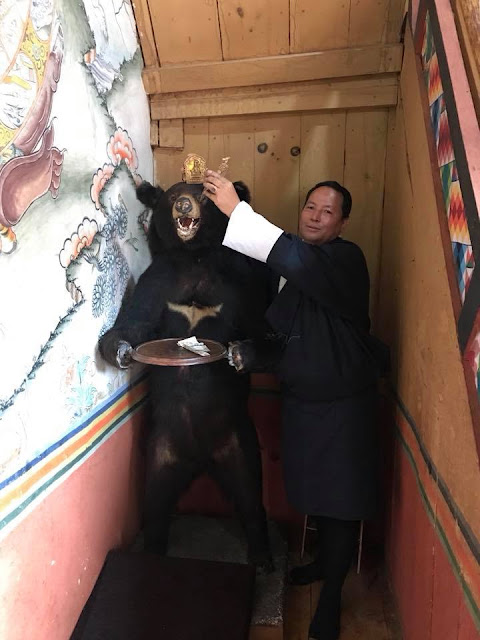 Sangchokhor is also called as Sangchen Chokhor. The origin of the name can be traced to the time of propagation of Vajrayana Buddhism.

The first Sungtul Jetsun Ngawang Choglay Namgyel, son of Serab Tenzin and Kuenga Gyalmo from Nyinug Khar of Dagana district, was born in 1706. However, the two-storied dzong was established in 1763 by second Sungtul Chogyal Sacha Tenzin (1734-1774). 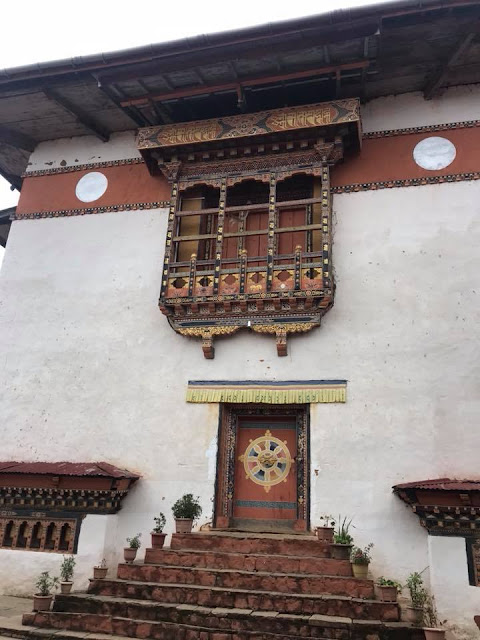 The third Sungtul, Choglay Yeshey Gyeltshen (1775-1830) from Wang Khasar in Thimphu served as the 20th Chief Abot of Bhutan in 1807. He was succeeded by the fourth Sungtul Jigme Dorji (1831-1851) from Tang in Bumthang. The fifth Sungtul was Yeshey Nidup (1851-1918) from Tang Chotod in Bumthang. He was born into the Pema Lingpa lineage. Yeshe Nidup held the important positions of Desi and Je Khenpo during his lifetime. He was fifty-three when he became the fifty-seventh Desi, a post he held between 1903 and 1906, and later served as fifty-third Je Khenpo from 1915 to 1917. Between the two postings he resided at Paro Sang Chokhor, during which time he constructed the Kunga Choling temple nearby. 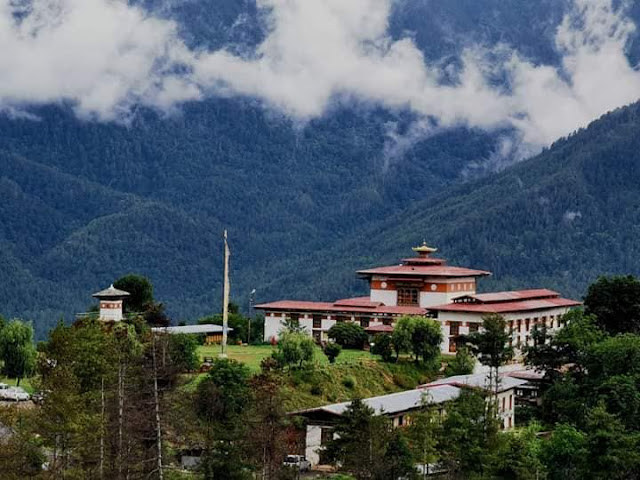 The sixth Sungtul Jigme Tenzin (1919-1949) was a son of Dongkarla Trulku Sangay Tenzin and Ashi Dorji Wangmo. It was his tenure in 1932 that the temple was burnt down by fire caused by a careless smoker, the stable groom of Paro Penlop, Tshering Penjor. Thereafter, the Sungtul left with his family to Jantse in Tibet. From there they settled in Shekar Drak in Haa valley.

The Monastery was latter constructed at the initiative of Rinpung Zimpon Tandin and the disciples of the Sungtul. It was reduced from two stories to one.

The main relics in the ground floor is the statue of Guru Rinpoche, Jampa Gonpo and Chenrigzig, Other relics include Kanjur and Tenjur, Ser Bum (the hundred thousand verses of Prajnaparamita written in gold). The Lhakhang also has Gonkhang (inner Santum) of the founder, the second Sungtul Choglay Sakya Tenzin.

I really liked the Guru Rinpoche Statue. It looks as if it is about to speak. The statue was constructed by Yap Ugyen Dorji. The caretaker told us that the main Zung ( inner relics) is the original Phurba ( ritual dragger) of Guru Rinpoche which is in possession of Yap Rinpoche. 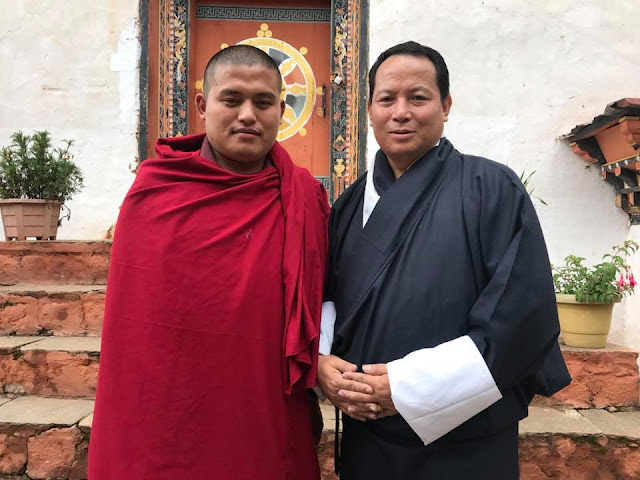 The main relic of the first floor is the staute of Zhabdrung Ngawang Namgyel. Looking beautiful and that about to speak. To his left and right are the stautes of the Zhabdrung Sungtuls.

The Monastery is linked to Bhutan’s s Royal Family in that late Yab, Dasho Ugyen Dorji, the father of the queens of the Fourth King of Bhutan is the nephew of the fifth Speech reincarnation, Choglay Yeshi Nidup (1851-1917). Yab Rinpoche renovated and upgraded the monastery and established it as Buddhist College in 1991. 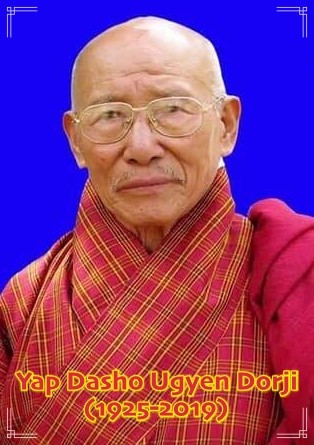 The college offers Buddhist studies at the postgraduate level. The principle of the college is a member of the University Council of the Royal University of Bhutan.

Historically, Sang Chokhor Buddhist College has only admitted monks as students to its institute. However in 2005 – very significantly – the college was authorized to enroll non-monastic students. Moreover, the first group of 25 Dzongkha lectures of the Colleges of the Royal University of Bhutan and officials from the Ministry of Education were enrolled in a Master`s degree program through distance mode. 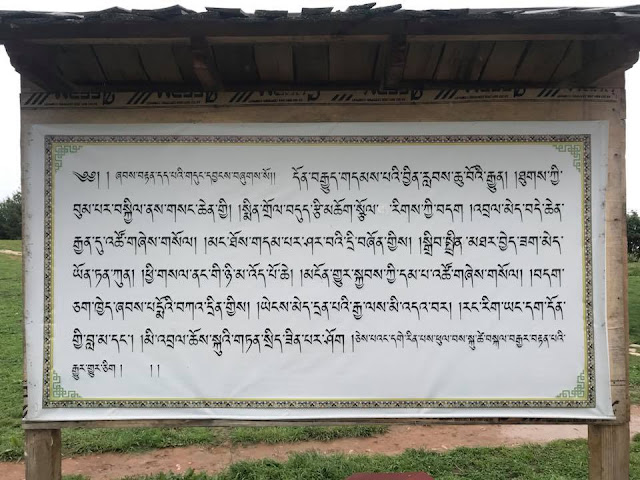 I am totally blessed to visit this Zhabdrung abode maintained by Yap Rinpoche. I was accompanied by my elder and younger brother and brother’s son. 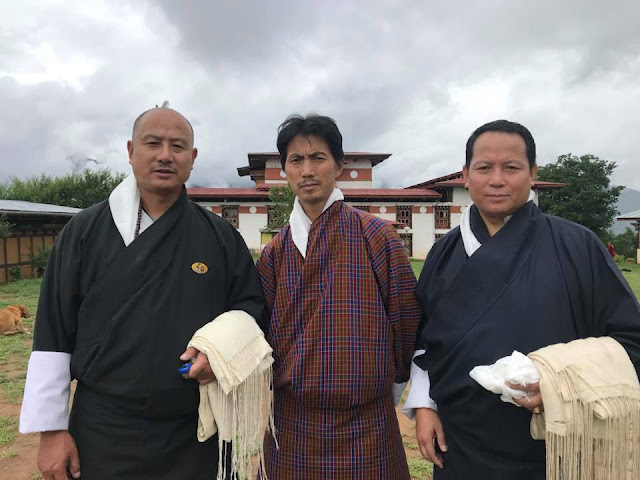 Please visit and get blessing.