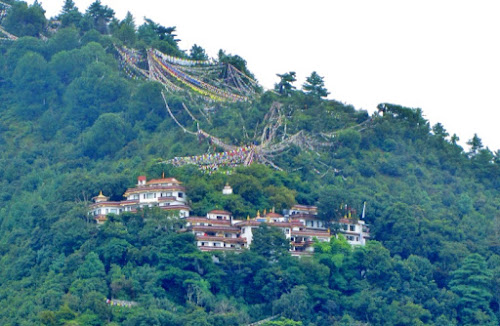 The village of Pharping is a well-known place of pilgrimage for the devotees of Vajrayana Buddhism, because it is the site of two caves associated with Guru Rinpoche who have meditated and achieved a high level of spiritual accomplishment in these caves.

The biographies of Guru Rinpoche explain that the master meditated for many years in these caves, practicing the tantric deities Viśuddhaheruka and Vajrakīlaya. In doing so, he also demonstrated the accomplishment of a level of spiritual attainment known as Mahāmudrā Vidyādhara, the third of four such Vidyādhara levels of attainment described in Buddhist tantras. 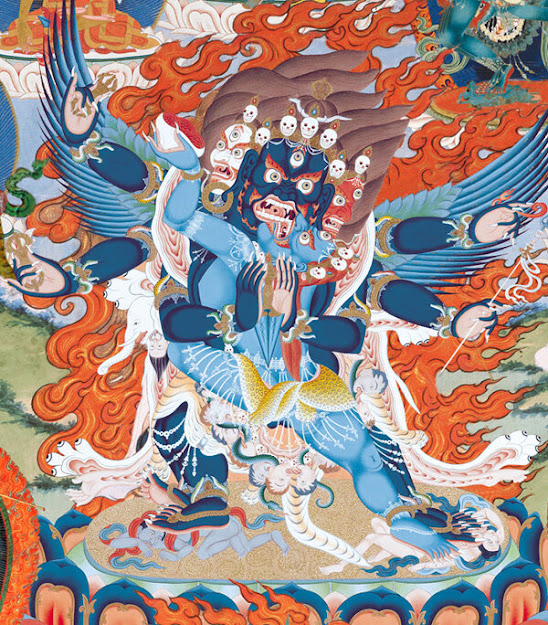 The cave of Asura is also known as ‘Upper Yangleshö’ or ‘the secluded hermitage of Yangleshö,’ as is mentioned in The Wish-Fulfilling Tree, a biography of Guru Rinpoche that was revealed by Chokgyur Lingpa (The Great Tertön: The Life and Activities of Chokgyur Lingpa): 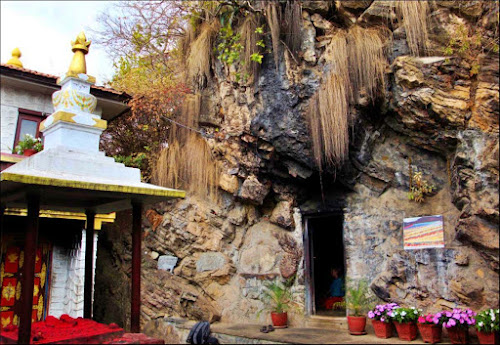 “In the upper practice cave of Yangleshö,
In order to attain the siddhi of the Great Seal,
I performed the practice of The Supreme Glorious Heruka.
Hindrances occurred, inflicting pain upon India and Nepal,
And so I asked my masters to send me teachings methods to repel them.
The messengers carried back the Sublime Knowledge of Kilaya.
By its mere arrival in Nepal, all hindrances were quelled
And I achieved the highest siddhi of the Great Seal”.

It is also widely believed that the two caves are connected via a small tunnel. Kyabje Tulku Urgyen Rinpoche mentions this in his book Rainbow Painting: 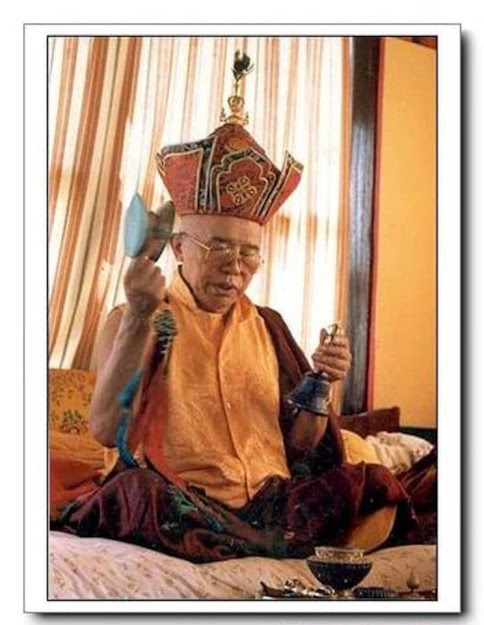 “In the innermost recesses of the Asura Cave at Pharping in the Kathmandu Valley is a tunnel that connects this cave to the Yangleshö Cave down below, about half a mile away. It is not a big hole. Wind passes through this passage and you can feel the draft when sitting near it. Although Padmasambhava (Guru Rinpoche) could traverse freely through solid matter, he used this narrow tunnel to move between Yangleshö Cave and the upper Asura Cave”. 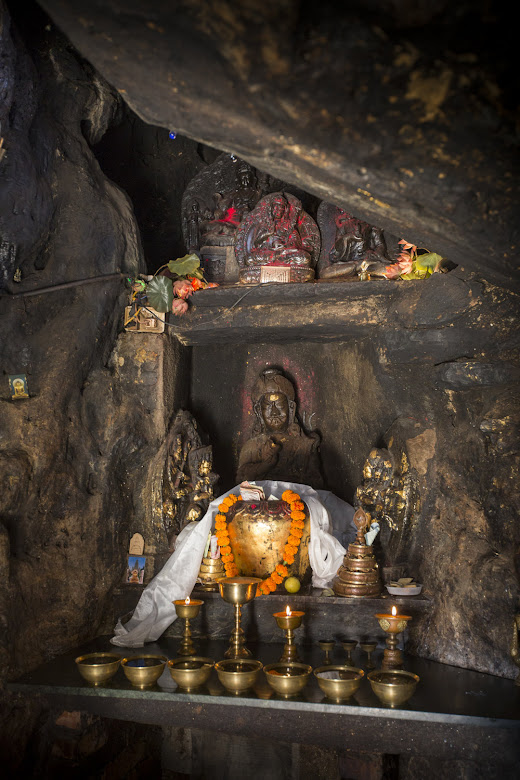 Many biographies and revealed tantras (termas) also explain that Guru Rinpoche bound under oath certain worldly spirits at Asura cave in order that they protect the Buddhist teachings. 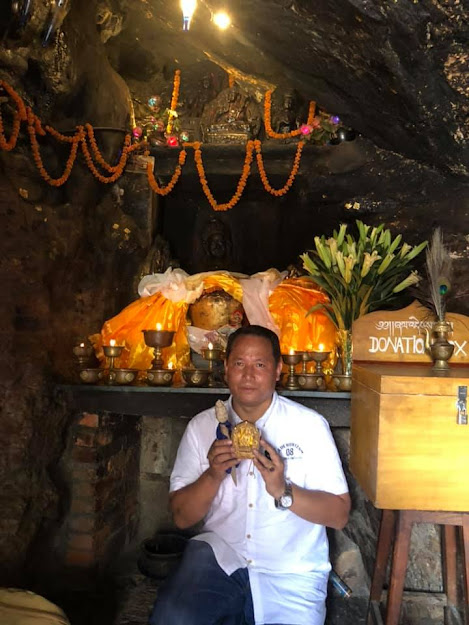 Furthermore The Dispeller of Obstacles revealed by Chokgyur Lingpa is among a number of texts that mentions Asura as the place where Padmasambhava bound the twelve Tenma goddesses under oath to protect the borders of Tibet. 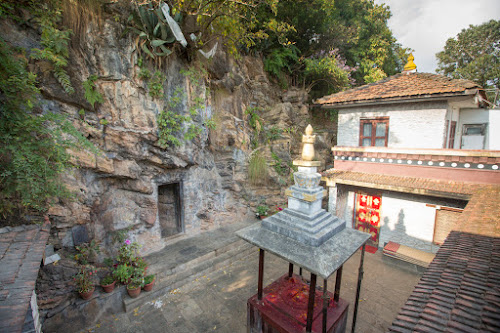 “On this side of India, and the far side of Nepal,
In the cave of Asura, Vidyadhara Guru Drapo
Along with Acarya Vasudhara, gave you, the 12 Tenma goddesses,
Permission to participate in their gathering atop a throne,
And gave you the nectar of the Vajrayana commitments”.

The twelve Tenma Sisters (བསྟན་མ་བཅུ་གཉིས) were the female protector deities of Tibet, bound under oath by Guru Rinpoche at Asura cave, in present day Pharping, Nepal. They consist of the Four Female Demons , the Four Menmos and the Four Yakshinis. 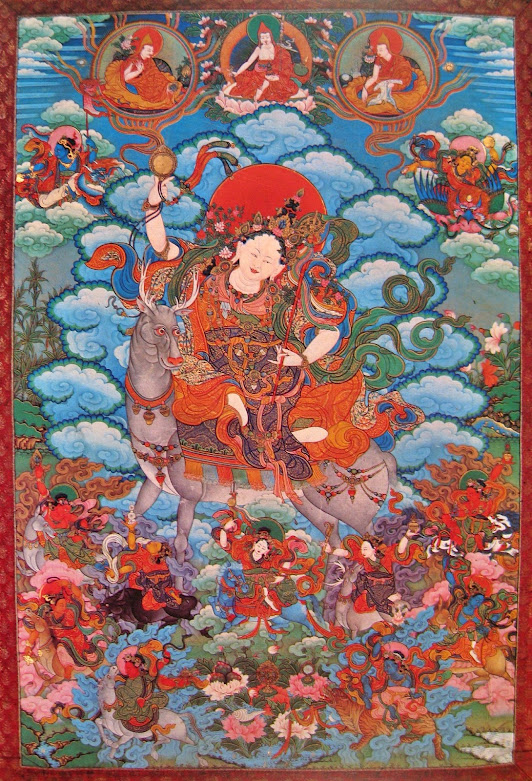 They are called the "Twelve Mother and Sister Tenmas" because they take care of us like a mother or like older sisters. They are accompanied by the divisions of hundred thousand female assistants.
There are several lists of the Twelve Tenmas. The Palchen Düpa from the Longchen Nyingtik cycle gives:

Pharping appears to have been frequented by Tibetans throughout their travels to Nepal and India spanning many centuries. One of Pharping’s most famous visitors was Marpa Lotsawa (1012-1097), whose 15th century biography by Tsangnyön Heruka records him spending some days in the area performing gaṇacakra pūjās while returning from his third trip to India. 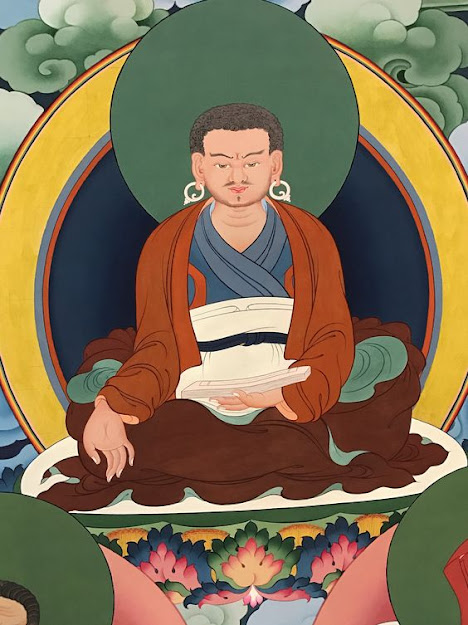 The Asura cave is situated on a ridge approximately 500 meters above Pharping in the jungle to its northwest. At the eastern foot of the hill, there is a Vajrayogini temple, one of four Yogini temples that mark the valley’s four direction (the others being Bijeshwari, Purano Guhyeshwari, and Sankhu’s Khadga Yogini).

The three main images enshrined inside the Asura cave are those of Guru Rinpoche in the middle, Shri Heruka to his right and Vajrakilaya to his left. These were built by Kunzang Tekchok Tenpai Gyaltsen, a student of the three Jamgons (Khyentse, Kongtrul, and Mipham Rinpoches), who came here and practiced these two deities, and had direct visions of them. 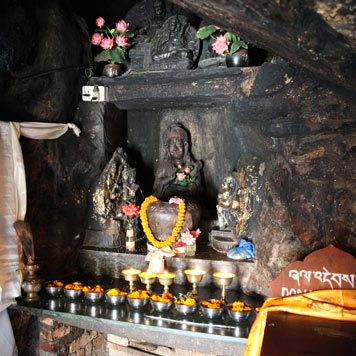 Clearly visible on the left side of the entrance to the cave, is a handprint. The handprint was actually made by a student of Tulku Urgyen Rinpoche's father, Chime Dorjé. The student immediately regretted making the imprint, saying that in future everyone would think it to be Guru Rinpoche’s handprint. 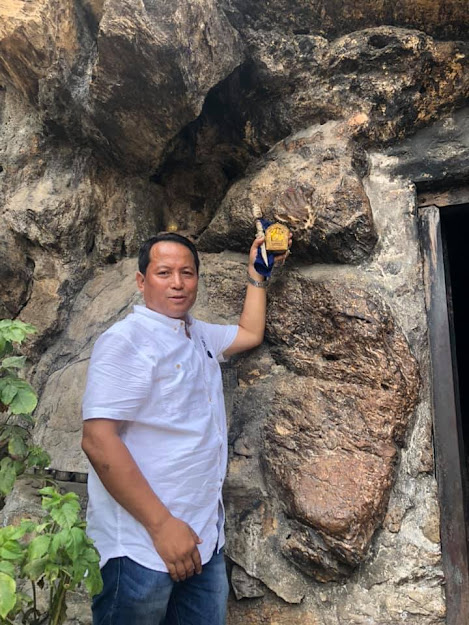 In this way, the caves of Yangleshö and Asura are both of great significance for the followers of Guru Padmasambhava. According to His Holiness Dujom Jigdral Yeshe Dorje and others, these caves are equal in significance to Bodhgaya for practitioners of Vajrayana Buddhism in so far as being the origin and spiritual centre of their respective traditions. 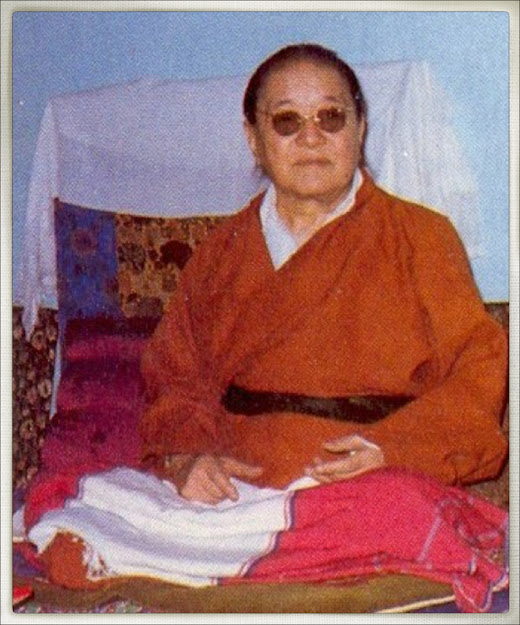 Before officiating the consecration of Ka-Nying Shedrub Ling Monastery in 1976, His Holiness the 16th Karmapa Rigpe Dorje had previously once visited Nepal, at which time he requested a long-life empowerment from Kyabje Tulku Urgyen Rinpoche. 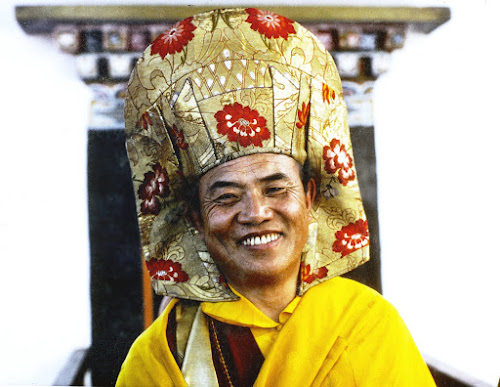 Rinpoche decided that the Asura cave would be an ideal place for such a ceremony and journeyed there along with Kyabje Chatral Sangye Dorje Rinpoche, Dabzang Rinpoche, Sabchu Rinpoche, Tharig Rinpoche, and Lopön Tsechu Rinpoche.

During the empowerment, some excellent signs appeared and the Karmapa requested that, in this place so sacred for the practice of Vajrakilaya, practice and retreat facilities should be constructed. The lamas present, perhaps seeing the difficult Cliffside location of the cave, did not immediately give any response. At that moment, the Karmapa explicitly ordered Kyabje Tulku Urgyen Rinpoche to complete the task with the help of Tsechu Rinpoche.

In one of his recorded teachings, Kyabje Tulku Urgyen Rinpoche also relates a story of his being invited to Kyabje Chatral Rinpoche’s retreat center at Yangleshö along with His Holiness Dujom Jikdral Yeshe Dorje Rinpoche. At the time, His Holiness Dujom Rinpoche related a brief explanation of the sacred places of Pharping and commented on how they are equal in stature to Bodhgaya. Later, the lamas went to Shesh Narayan temple where a number of villagers were receiving red tika from the image. 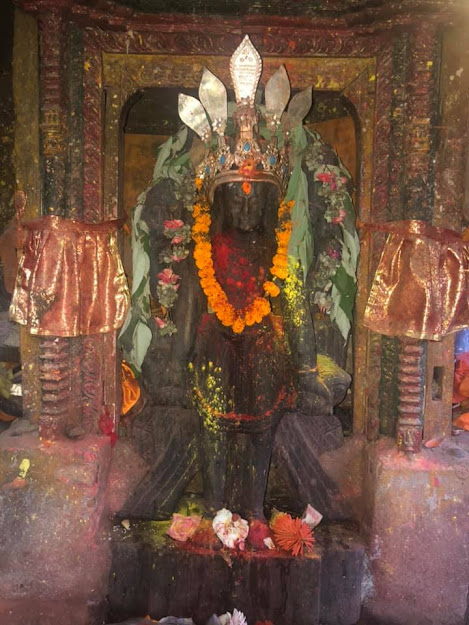 A Brahmin woman asked if the lamas would also like to take tika, and His Holiness Dujom Rinpoche enthusiastically accepted. He said that this was a very auspicious sign indicating that the Buddha dharma would flourish in Pharping. 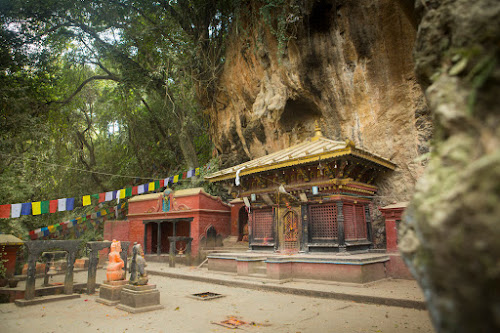 Over the years, many highly respected lamas have stayed and practiced at Asura for various lengths of time. Kyabje Tulku Urgyen Rinpoche himself stayed many strict retreats in a room near the cave, often lasting a number of months. Similarly, Khenpo Petse, Namkhai Norbu Rinpoche, Tarthang Tulku, Sogyal Rinpoche and many others have also practiced at Asura. A number of drubchens, hundred thousand feast offerings, and Vajrakilaya pujas have also been held in the temple over the years.

Notably, His Holiness Khenpo Jigme Phuntsok also visited Asura in 1990 where he stayed for a number of days. He revealed a Kiliya and a terma text from the cave that is a sadhana of Vajrakilaya (phur pa mgul khug ma’i cha shas thugs dam thugs kyi phur gcig). 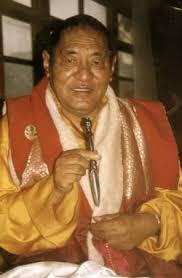 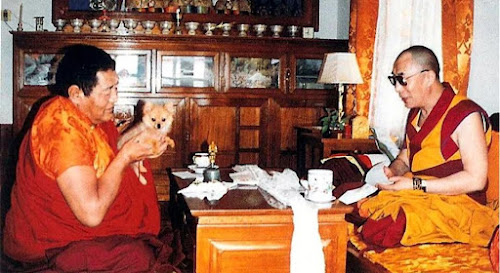 I am truly blessed to be at the engligntement place of Guru Rinpoche last year and made most of the occasion. I have recited the following prayer written by Jamyang Khyentse Chökyi Lodrö.

Prayer in praise of Yanglesho. 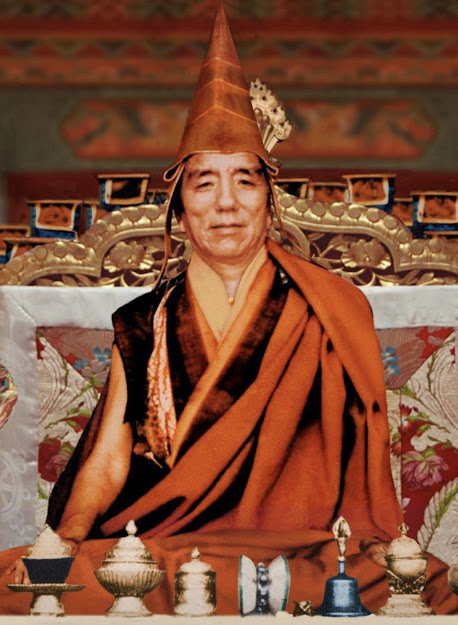 དེ་ཡི་བྱིན་རླབས་སྒྲུབ་གནས་ཆེ། །
dé yi jinlab drub né ché
As a result of this blessing, this great and sacred place

གསང་བ་མཆོག་གི་གྲོང་འཇུག་ཤོག །
sangwa chok gi drong juk shok
And may they enter the city of the supreme and secret practice.

ཕ་ནོར་བུ་ཡིས་སྤྱོད་པ་དང༌། །
pa norbu yi chöpa dang
The treasures of the father—be enjoyed by his heirs,

ས་གསུམ་རབ་དགའི་དབྱངས་སྒྲོགས་པས། །
sa sum rabgé yang drokpé
And may the melodious sounds of perfect joy resound throughout the three worlds, 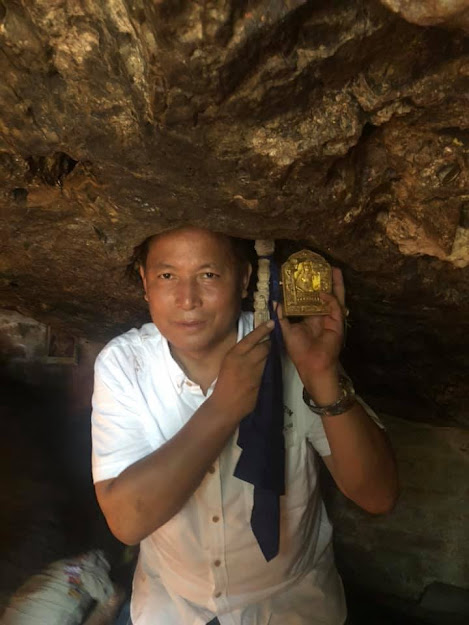 All practitioners of Vajrayana Buddhism must visit this sacred place of Guru Rinpoche. 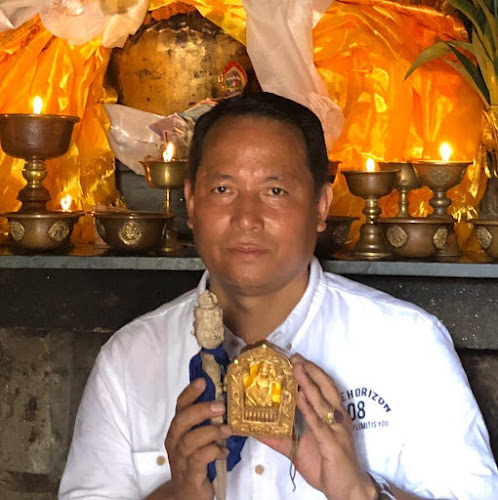