The 4 Great Kings are worldly deities with cosmic powers. These are spiritual protectors and guardians of the four directions. The four kings are often depicted alert and ready to ward off negative influences and are said to be powerful protectors for those requiring protection from evil demons and sprits.They are also known as:

The Four Great Kings are:

1.   Dhritarashtra (ཡུལ་འཁོར་སྲུང), 'Defender of the Area' in the east; 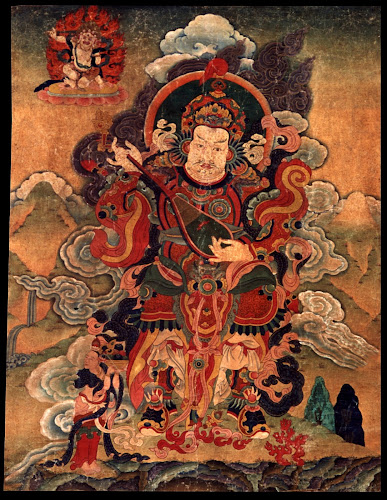 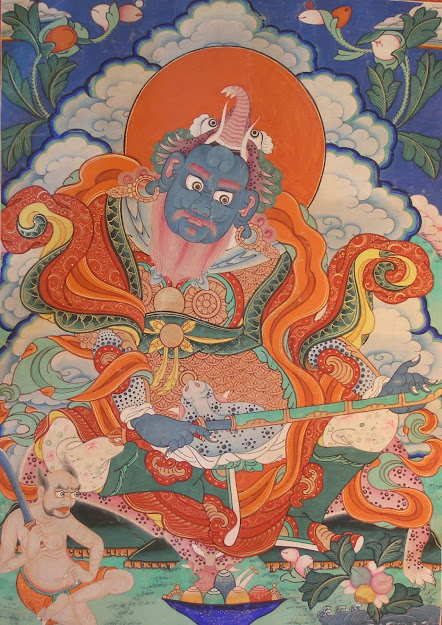 3.   Virupaksha (སྤྱན་མི་བཟང་), 'Ugly Eyes' in the west; and 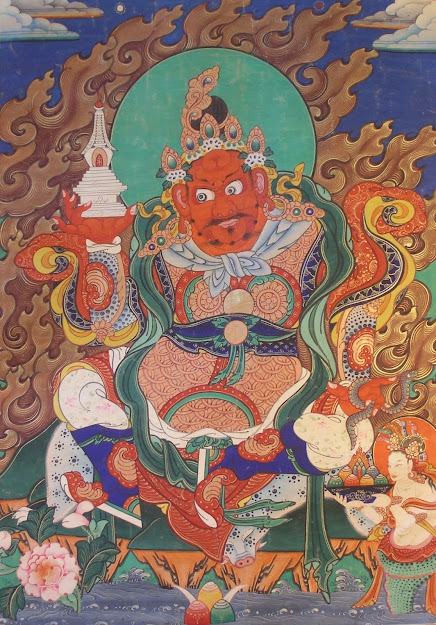 4.   Vaishravana (རྣམ་ཐོས་སྲས), 'Son of He who has Heard Many Things' in the north. 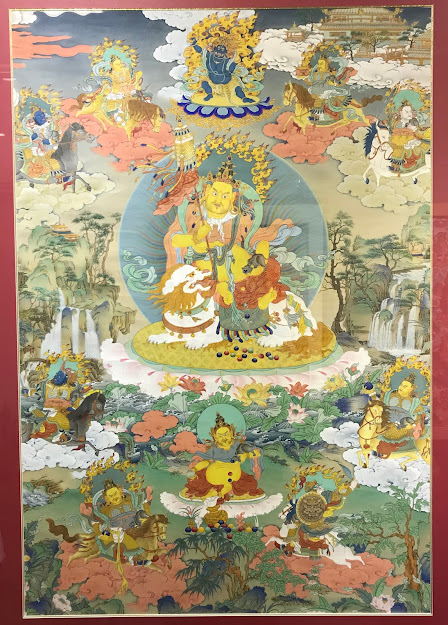 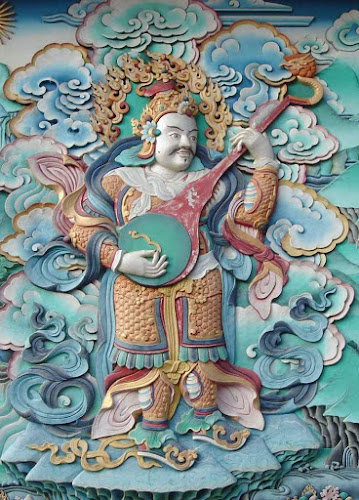 He is the Guardian King of the East and chief of the Gandharvas (the musicians of the heavens).

In a previous life he and Virudhaka were Nagas. Filled with fear of the Garudas (the great bird-like beings who prey on the Nagas), they would not stir from the bottom of the ocean, but upon hearing of Buddha Kashyapa’s teaching, they took refuge in the Dharma. From then on, their virtue protected them from harm and they lived, free of fear, on the ocean's surface.

Whatever sound he hears is turned back, causing harm to whoever produced it; therefore, he covers his ears with his helmet and plays a stringed instrument so that he will not hear any other sounds. 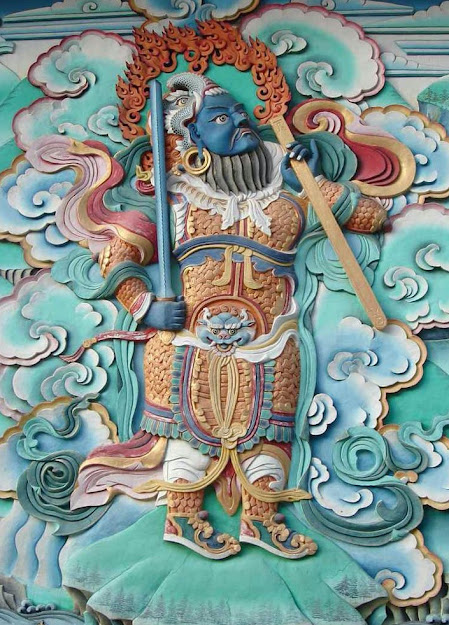 Guardian King of the South and leader of the Kumbhandas (fierce beings who reside in the desire realms of the heavens).

Virudhaka, along with the other guardian kings, protected Buddha Shakyamuni's mother before the prince was born and continued to assist him during his lifetime. Today he protects beings who have led a virtuous life from Yama, the Lord of Death, and uses his power to ward off anything that would disrupt the Dharma.

Because his touch is harmful to beings, he carries a sword to prevent them from approaching him. 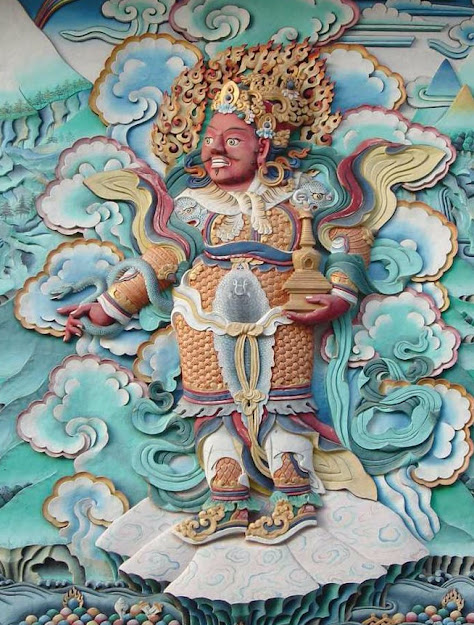 Guardian King of the West and leader of the Nagas.

In a previous life he was a Garuda and, along with Vaishravana, had attacked two Nagas who lived fearlessly on the ocean surface but were unable to harm them. The Nagas explained that they had taken refuge in Buddha Kashyapa (འོད་སྲུང) and their virtue protected them. Hearing this the two Garudas also took refuge. The two Nagas and two Garudas all prayed to be reborn in the time of Buddha Shakyamuni in order to support him.

He protects beings in the western direction, averting forces that obstruct the practice of Dharma. His glance is harmful to beings and so he avoids looking at them by gazing at the stupa he carries. 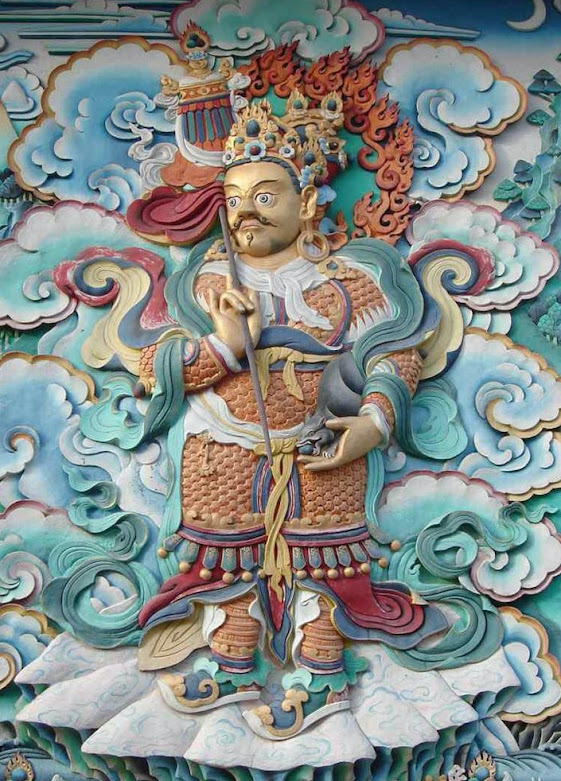 Guardian King of the North and leader of the Yakshas (གནོད་སྤྱིན).

Because his breath is harmful, he keeps his mouth tightly closed. He confers spiritual and material wealth on practitioners of the Dharma, symbolized by the jewel-producing mongoose in his left hand.

The mantra of the four great king is given below. 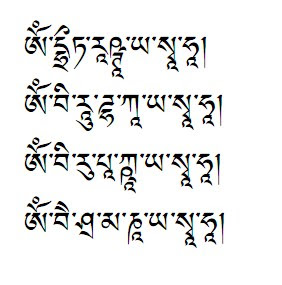 Whenever you travel you may recite this mantra once.