How I got the sacred Relics of the Great Jarungkhasor (Boudhanath). 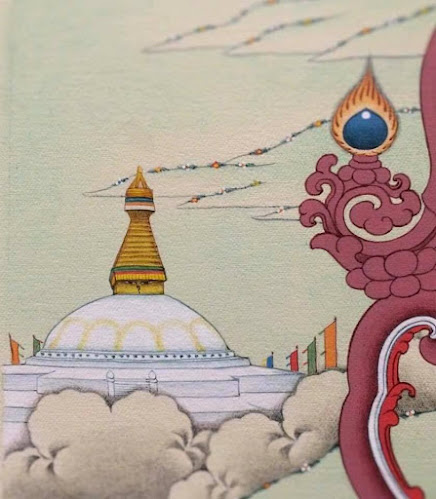 My trip to Nepal was long overdue and the visit to the great Jarungkhasor (Boudhanath) was my highest priority. This stupa has direct historical relation with Guru Rinpoche. 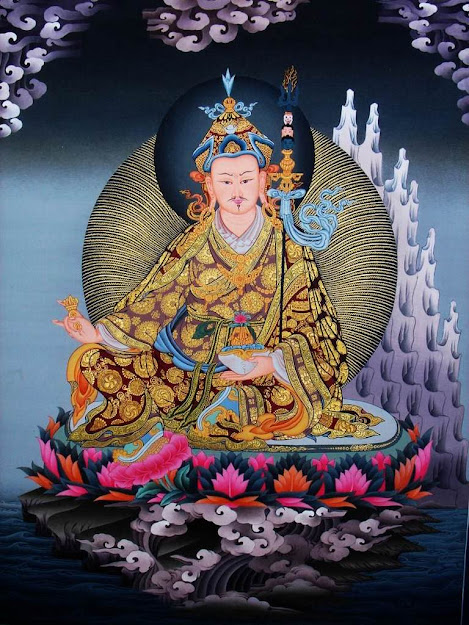 I went there in July 2019 and visited the great Stupa of my dream. It was so massive, circular in shape with Buddha eye watching every guest from four directions. It looked fresh, restored few years back after certain portion of the stupa got damaged in the massive earthquake that struck Nepal in April 2015. The ornamented golden panicle was beaming to the rays of the sun. Many pigeons take rest on the slippery slope of the stupa after a good feed. Prayers flags pilots the track of breeze. Hundreds of people go around the stupa nonstop with recitation of prayers or mantras. There were certain old monks seated on the ground reciting prayers in loud voice, some even with big dramru. Compassionate people were seen gifting money to them. There were people feeding the huge flocks of pigeons in one corner. The atmosphere was lively and too holy. 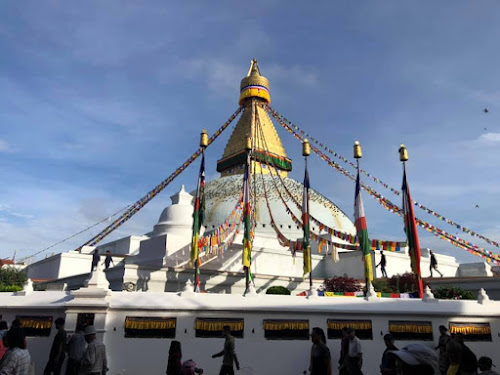 I did go around and sat in all four direction and offered Jarungkhasor prayer composed by HH Jamyang Khyentse Chökyi Lodrö. 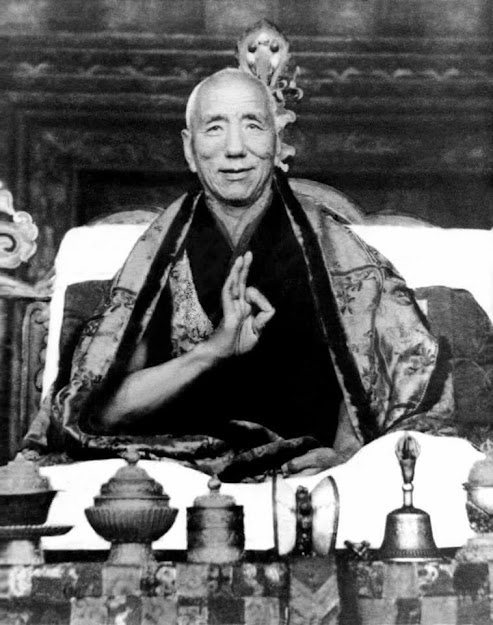 A Prayer to the Stūpa of Jarung Khashor in Boudha

This great stūpa symbolizing the dharmakāya,

The sublime wisdom mind of all the buddhas,

‘Great Liberation Upon Seeing’, to you I pray!

Which arose from the noble aspirations of the ḍākinī Samvarī—

Supreme representation ‘Wish-Fulfilling Jewel’, to you I pray!

The Abbot, the Precious Master and the Dharma King

To this field for the accumulation of merit among gods and human beings,

I prostrate in devotion!

Before you, I make offerings, I confess my misdeeds and I rejoice in virtue;

I implore the masters to teach and to remain without passing into parinirvāṇa;

And I dedicate all my merits to the infinity of beings throughout the vast reaches of the universe.

May the Buddhadharma flourish and may the lives of its holders remain secure!

May the turmoil of this age be pacified and may the splendours of happiness and virtue increase!

May everyone—male and female, living or dead—who has any connection with you

Be brought swiftly to supreme and unsurpassable awakening!

This aspiration was made by Chökyi Lodrö in the presence of the sacred stūpa itself. 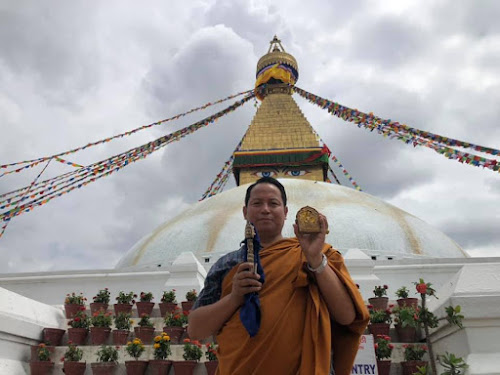 After finishing I have dedicated the prayers to all sentient beings. It was a great day for me.

Glancing at the great stupa, I had certain feeling that I should get some relics from this great stupa. But how? Impossible. No way to get. 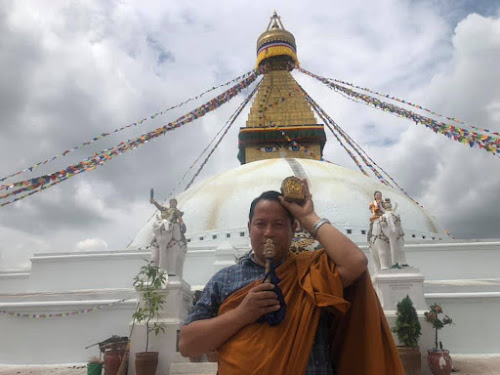 That night I kept thinking of it. My strong desire of getting some relics did occupied my mind till I went to sleep.

The next morning, I have again proceeded to the Jarungkhasor and performed Riwo Sangchoe and others prayers at the base of the stupa. After completing, I just checked my Facebook messenger.

One of my Facebook follower Dekyong Lhamu sent this message: 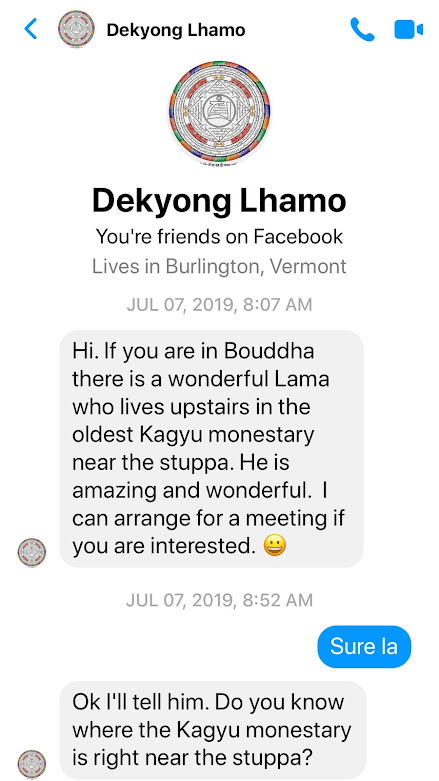 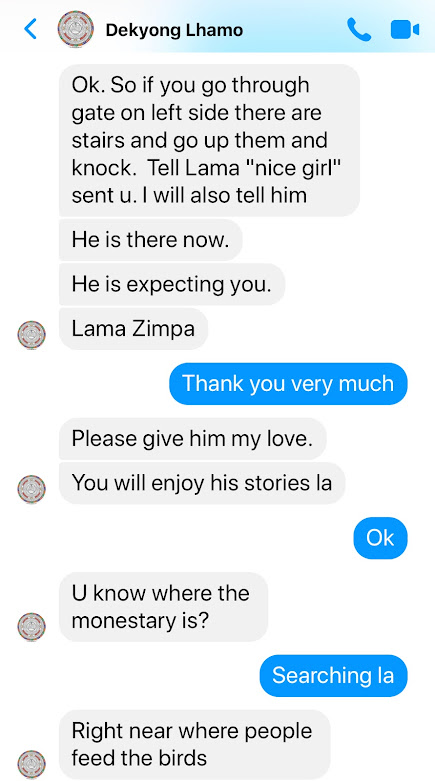 This really gave me some hope of receiving some relics and I just went to met the Lama. After searching for some time finally, I am there. 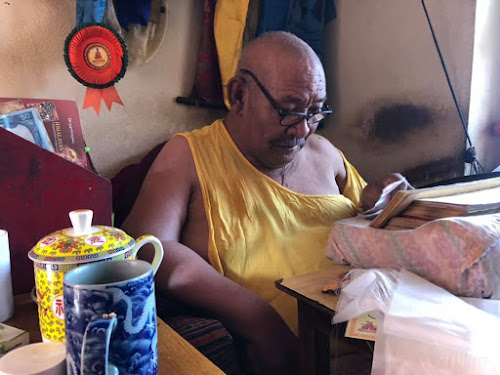 I gave him all sacred Kudung pills of HH the 69th Je Khenpo that I was carrying with me. I have also offered some money. He was very happy. On enquiry I found that he was living there from last 30 years. That 30 years duration sounded a message that he was in possession of some relics of the great stupa.

With some valor I just probe whether he has anything of this stupa. He replied positively but said he wished to send to Tibet as Zung for his upcoming monastery. On repeated request finally the kind Lama asked me to collect in the evening as he need to take rest.

As asked, I went in the evening with my kids and he gave me the following sacred stupa’s relics: 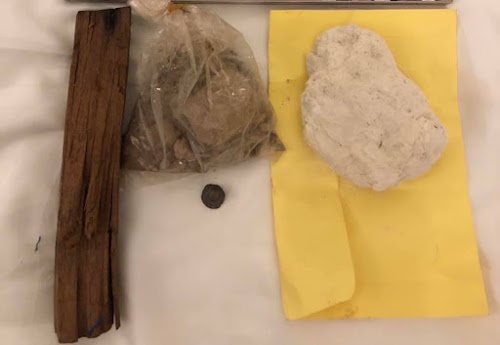 ·      One very small stupa believed to made and installed by Guru Rinpoche in his previous life. 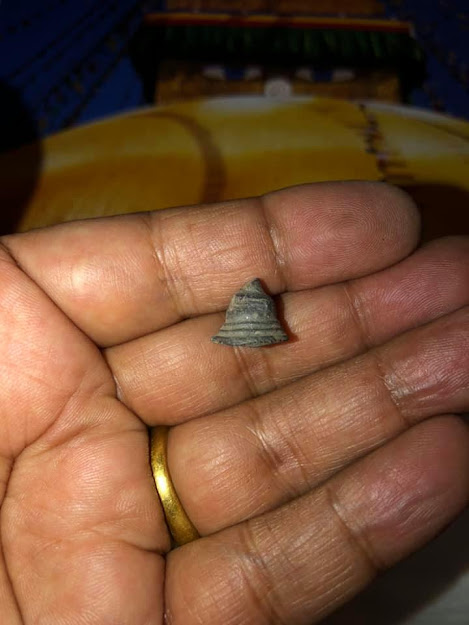 ·      A lump of whitewash. The lumps was  formed due to repeated whitewash done by many past great Rinpoches.

It was last year on this day 7th July 2019, I got the above relics of Great Stupa Jarungkhasor (Boudhanath). Truly blessed and very happy to receive such rare holy items. If you have faith things comes your way unexpectedly. 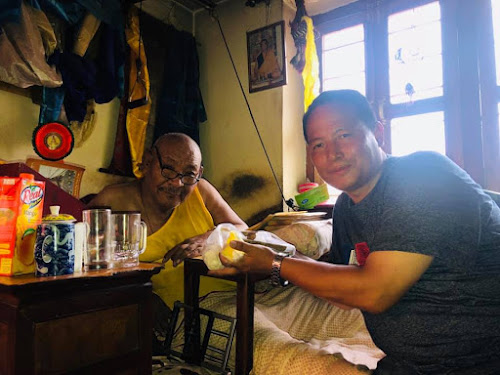 “Now it is impossible to get such relics of this great stupa unless the stupa gets destructed. Please keep safe and receive continuous blessing from it”.

Lastly thanks to my Facebook friend for divinely connecting me with the relic holder. Thank you. 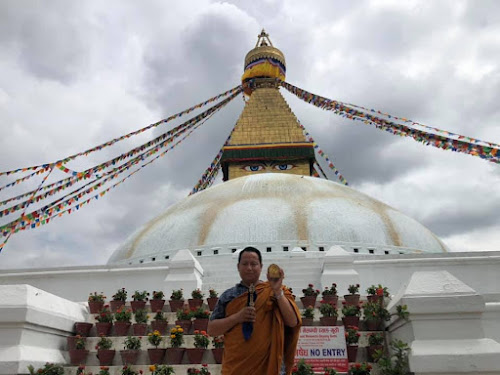 In a bygone age countless kalpas ago, the Bodhisattva Mahasattva, the Lord Avalokitesvara (སྤྱན་རས་གཟིགས), vowed at the feet of his Guru, the Buddha Amitabha (སངས༌རྒྱས༌སྣང་བ་མཐའ་ཡས), to liberate all beings from the misery of this world. Then having delivered innumerable beings from sorrow he climbed to the top of the Potala Palace thinking that all beings without exception had been released. But looking over the six realms he saw many beings still languishing in the lower worlds like flies on a refuse heap.

Thinking that it was not possible to deliver all beings from the ocean of misery, which is this world, he wept, and, wiping two teardrops from his eyes with his forefinger, he prayed that even these two tears might assist beings of the future to overcome their sorrow.

In fulfillment of that prayer those two teardrops were transmuted and incarnated as two daughters of King Indra (ལྷ༌ཡུལ༌དབང༌པོ༌རྒྱབ༌སྦྱིན) who resided in the Heaven of the Thirty-three Gods. The daughters were named Goddess Purna (Complete) and Apurna (Incomplete).

Apurna (ལྷ༌ཡུལ༌བུ་མོ་གང་ཆུང་མ) once stole some flowers and as a punishment for violating the law of the gods she was reborn in the human world into a very ordinary family of the earth after the reduction of her religious merit from the heaven. 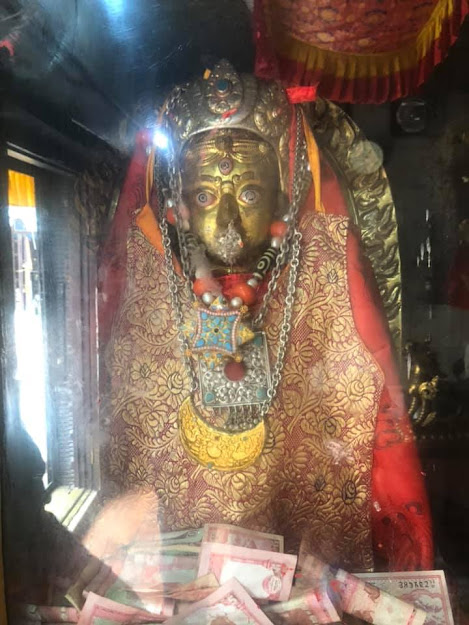 She had four husbands, and gave birth to four sons from each of her husbands. Tajibu (རྟ་རྫིའི་བུ) was born of a horse trader, Phagjibu (ཕག་རྫིའི་བུ) from a pig trader, khyijibu (ཁྱི་རྫིའི་བུ) from dog trader and Jyajibu (བྱ་རྫིའི་བུ) from poultry businessman.

With enough accumulation of her wealth from her profits she decided to build a Great Stupa, a receptacle for the Mind of all the Buddhas, her own projected divinity.

After permission from the King, the construction of the Great Stupa was

begun, along with her four sons. The construction materials of soil, bricks and stones were carried on elephants, horses, donkeys etc. Majyajima died four years later, after completion of four stories of the structure, and after three more years of ceaseless efforts, the sons completed The Baudha stupa. It took almost seven years in total to complete the construction. 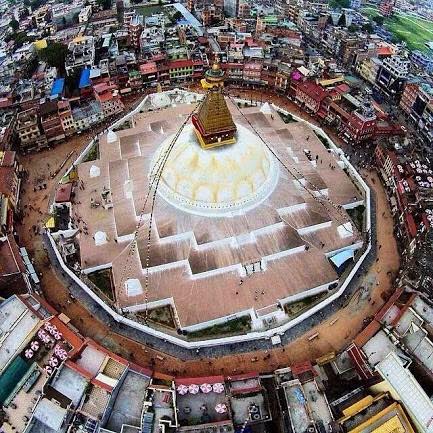 The indestructible remains of the Tathagata Mahakashyapa (the Buddha of the previous age) were sealed in the tree of life within the stupa.

It is believed that thousands of Buddhas and heavenly Deities incarnated as Lamas in the Baudha stupa. It is said that because of Rabne, the rays of Bodhisattvas entered in the song from heaven and the holy sound of was heard in the sky. Due to being empowered by the Bodhisattvas this stupa is viewed with a great reverence as are Sangye Tong Duspai Chorten (སངས་རྒྱས་སྟོང་འདུས་པའི་མཆོད་རྟེན) etc.

After the completion of the construction of Boudha stupa, Tajibu prayed very devoutly to become the king of the northern region to disseminate the religion, so he was the Dharma King Trisong Detsen of Tibet in his next life.

Phagjibu wished to be a scholar to disseminate the religion, and he became Bodhisattva Śāntarakṣita, an enlightened teacher in Tibet in the next birth.

Khyijibu was incarnated as the enlightened Guru Rinpoche Padmasambhava on Ashada Dashain (on the tenth day of lunar calendar of first half of Ashada) in Oddiyana, (ཨུ་རྒྱན), in the southwest area, at Dhanakosha lake. He suppressed the Demons who were barriers to the religion and conserved and protected the religion from the Demonic attacks.

Jyajibu prayed to be a minister for the protection of religion in the north and as an answer to his prayer he was born at Tibet and became the minister Bhami Thri Zher (སྦ་མི་ཁྲི་བཞེར).

All of these people prayed for themselves but they did not pray for the animals, which transported bricks, soil, and stone. So these animals became angry and the elephant prayed to be the Demon in the next life to eliminate the religion. So he became the King Langdarma of Tibet in the next life, where Tajibu had disseminated the holiest religion.

In the same way, the Donkey prayed to become a minister in the next life to destroy the religion and he too became a minister Dudlon Mazhang Drompakye (བདུད་བློན་མ་ཞང་གྲོམ་པ་སྐྱེས) in Tibet.

A crow listened the prayers of these animals who prayed for the destruction of the holiest religion, and he (the crow) prayed to the Bauddha Stupa to be a minister to protect and preserve the holy religion by killing the demonic king Langdarma (རྒྱལ་པོ་གླང་དར་མ) in the next life. He was born as Lha Lung Pal Gyi Dorje (ལྷ་ལུང་དཔལ་གྱི་རྡོ་རྗེ) in the next life, and assassinated King Lang Darma with a bow and arrow.

The cowherds and shepherds, who prayed for the protection of religion and suppression of demons (who were attempting to eliminate the holy religion), were born as Cholon Gos Padma Gung Tsan (ཆོས་བློན་འགོས་པདྨ་གུང་བཙན) in Tibet to conserve the religion.

In the same way, Chodpurchan and Sarse, two Brahmins who prayed to the stupa to be born in the holy country and to write the holy literature were reborn in the next life as Kawa Paltsek (སྐ་བ་དཔལ་བརྩེགས) and Chogro Lhui Gyaltshan (ཅོག་རོ་ཀླུའི་རྒྱལ་མཚན) these two translated thousands of holy teachings of Lord Buddha into Bhoti (Tibetan) Language.

In addition to this, two crown princes of Nepal prayed to be helpers in disseminating the religion, and they became Denma Tsemang (ལྡན་མ་རྩེ་མང) and Legzyin Nyima (ལེགས་བྱིན་ཉི་མ) in their next lives and wrote many holy books.

Along with this, the religious king of Tibet, Dechen Devachan asked the greatest teacher Rinpoche: "what could be the factor and cultural background of our previous life that made us deeply devoted in religion and active in disseminating religious matters"?

He was answered and was reverently referred by the Guru as 'Jyarung Khashor. 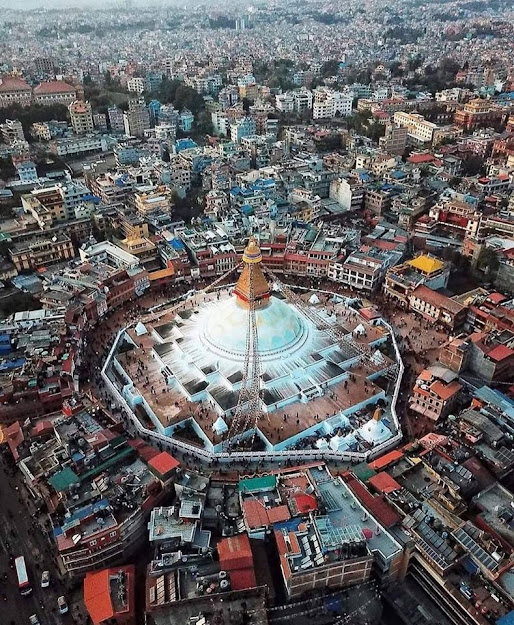 Therefore, the sacred Jyarung Khaskhor stupa is an aspiration fulfilling stupa that one has to visit and make aspiration to help sentient beings in our next life.