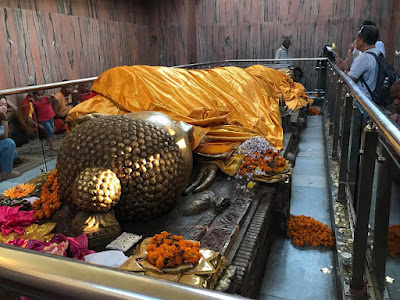 Every year, the fifteenth day of the fourth Bhutanese’s Lunar month (which falls tomorrow the 5th June 2020) is observed as Lord Buddha’s Parinirvana, the passing day of lord Buddha.

Since in the same corresponding month and period earlier, four important events took place in the life of lord Buddha. Therefore, the Bhutanese, the Tibetan, the Dangzongpas and Lhadapas observed the day as Duechen Ngazom, the most auspicious day of the year.

Let us reflect one by one.

FIRST DEED
When the Buddha was teaching in the paradise of Tushita, which is a realm where the devas (gods) reside and also a Sambhogakaya realm, the sound of his previous motivation reminded him that it was necessary to take birth in our world and teach the dharma. 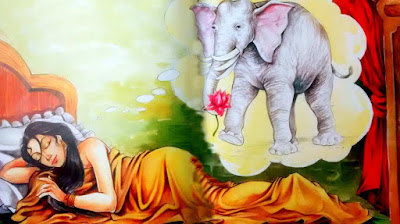 After having made these determinations, he decided to take birth in our world. This particular deed of leaving Tushita was intended to teach us that somebody, who has achieved enlightenment, is no longer a slave of his own karma, and has control over anything he or she does.

The Buddha was conceived into the womb of his mother, Mayadevi (by taking the form of a White Elephant descending from Tushita and entering the womb immaculately). One may wonder why he was conceived and then took birth. If he had complete control over everything, then why wasn’t he born miraculously from a lotus flower, as was Guru Rinpoche?
The Buddha had a special reason for being born the normal way. He was thinking in the long term of his future disciples, who would be inspired because the Buddha, who practised and achieved enlightenment, started out like anyone else. He did this to instil conviction and confidence in his future disciples.

SECOND DEEDS
Although the Buddha took an ordinary human birth, there was still something special in his birth. The Buddha came out of the body of his mother through her right side. Some people might wonder how this was possible. They might think, “Well, what exactly happened? Did the rib cage crack?” One doesn’t need to think in terms of anatomical problems, because the Buddha was a miraculous being and he just took birth through his mother’s right side without any pain or obstacle. 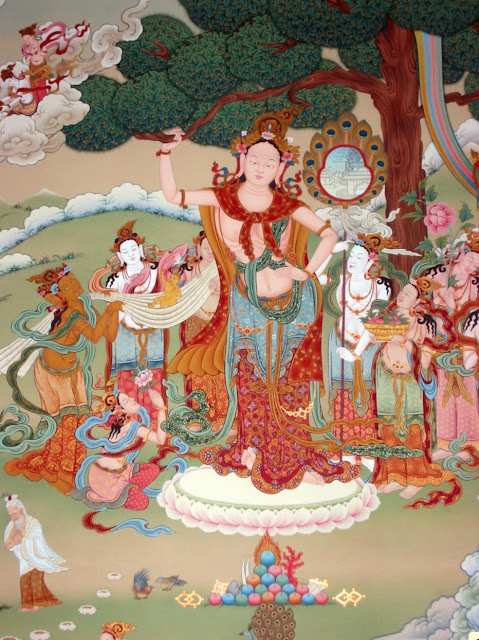 At the time of the Buddha’s birth, there were many very special things happening where he was born. All of a sudden, crops started growing. Trees appeared all over the area of Lumbini and rare flowers, such as the Udumvara flower that had never grown in this area started blooming everywhere. Due to these events, he was given the name Siddhartha in Sanskrit, or Dhon Drup in Tibetan, which means, “the one that makes everything possible”.
As a result of interdependent origination, the presence of a highly accomplished individual produces changes in the environment, such as the blossoming of flowers.

THIRD DEEDS
When the Buddha was sitting under the Bodhi tree Papiyan, the leader of Maras, used forms related to the three disturbing emotions (sometimes called kleshas) of ignorance, desire, and aggression to try and lure the Buddha away from his pursuit of enlightenment. The first deception, representing ignorance, was that the Buddha was asked to abandon his meditation and return immediately to the kingdom, because his father King Shuddhodana had died and the evil Devadatta had taken over the kingdom. 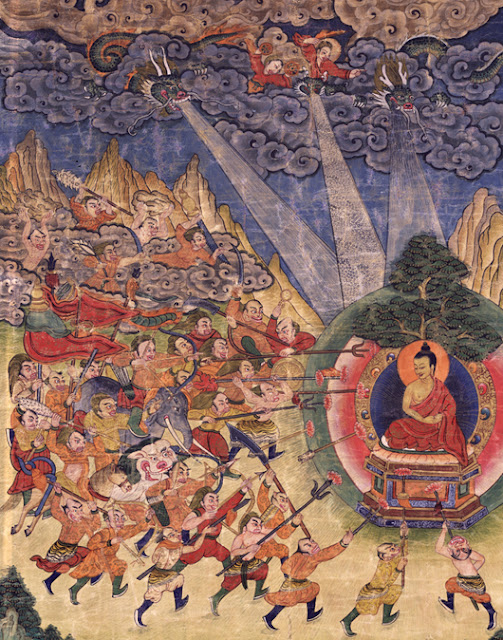 Then Papiyan tried to create an impediment using desire; his beautiful daughters tried to deceive and seduce the Buddha. When this did not disturb the Buddha’s meditation, Mara then used hatred by coming towards the Buddha surrounded by millions of horribly frightening warriors, who were throwing weapons at the Buddha’s body. But the Buddha wasn’t distracted or fooled by these three poisons. He remained immersed in compassion and loving-kindness and therefore triumphed over this display of the three poisons and was able to eventually achieve enlightenment. (This deed of the Buddha is represented by the image of the Buddha “taking the earth as witness,” gently touching the ground with his right hand and holding a begging bowl in his left hand. 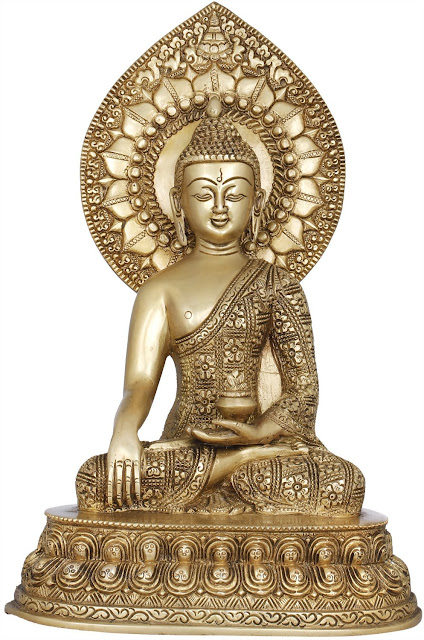 FOURTH DEEDS
Since the Buddha developed all the qualities of meditation to the utmost stages, he was able to reach enlightenment. He did this to demonstrate that we also can reach enlightenment. As a matter of fact, one of the main points of the whole Buddhist philosophy is to show us that Buddha hood is not something to be found outside of us, but something we can achieve by looking inside ourselves. 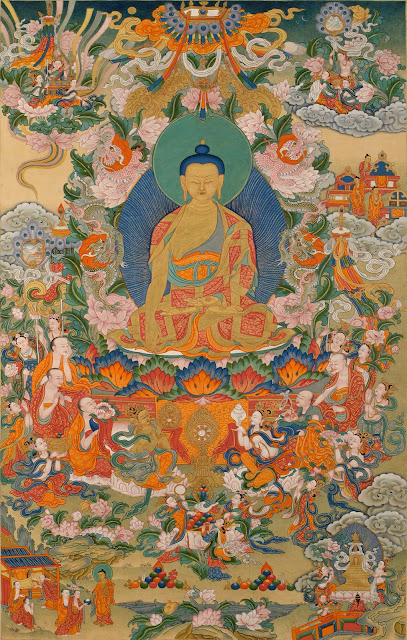 And the qualities that we attain with enlightenment will be no different from the ones the Buddha attained. Also, the Buddha managed to eliminate all the negative emotions, the same ones we presently experience.

FIFTH DEEDS
Although the Buddha had the capacity to prolong his life, he had decided that the time had come to leave his body. The contaminated meal provided the necessary causes for this to occur.
From Pava, the Buddha and his sangha proceeded slowly to a grove of sal trees near Kushinagar. A simple bed was prepared beneath the shade of two unusually tall trees, upon which the Buddha lay in the lion pose with his head facing north. It was at this spot that he held a final audience with his disciples.
Basically there are 3 reasons behind Lord Buddha choosing to attain Parinirvana at Kusinagar.


Informed of the Buddha’s impending death, many people gathered to pay their respects, among them a 120-year-old Brahmin named Subadra who requested to speak with the Buddha.
Out of concern for the master, Ananda initially refused to admit him. However, the Buddha beckoned the Brahmin to come forward and the two spoke at length. With his mind completely cleared of doubts, Subadra entered the Buddha’s sangha and so became the last monk ordained by the Buddha. It is recorded that soon after this event Subadra attained arhatship. 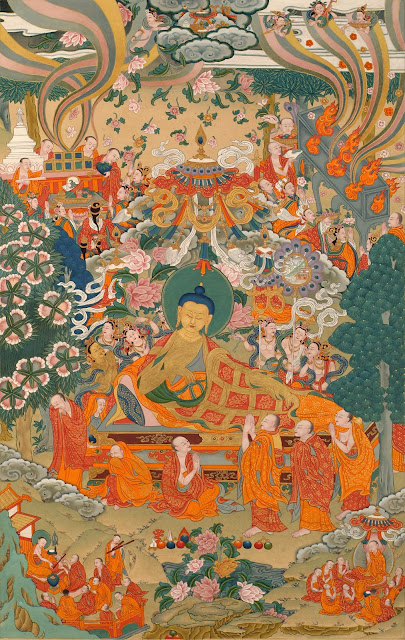 During the third quarter of the night, the Buddha drew his disciples around him and three times enquired whether they had any remaining queries concerning his teachings or the rules of discipline. Everyone remained silent. The Buddha then offered one final teaching: “Impermanence is inherent in all things. Diligently strive to attain your own freedom.” Under the light of the full moon, he then passed through the meditative absorptions and entered parinirvana.

On this day, it is customary to undertake meritorious acts such as making offerings and receiving blessings at monasteries. In addition to these traditional ways of commemorating the Buddha’s parinivarna, it would also be of great benefit to develop wisdom by reading about the Buddha’s life and contemplating his teachings. 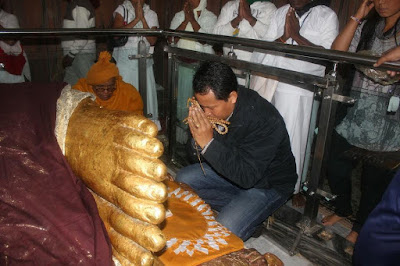 Image: At the feet of Lord Buddha at Kusinagar, UP, India. The very place where Buddha entered into nirvana.
Have a great holy day.
By Phub Dorji Wang at June 04, 2020
Email ThisBlogThis!Share to TwitterShare to FacebookShare to Pinterest
Newer Post Older Post Home