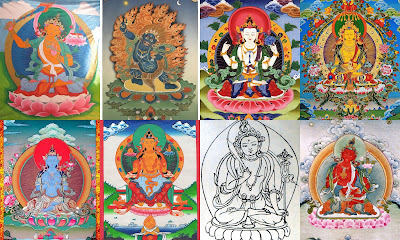 The eight bodhisattvas are also known as Eight Close Sons (ཉེ་བའི་སྲས་བརྒྱད). They are the main bodhisattvas in the retinue of Buddha Shakyamuni.

The term bodhisattva literally means "essence of Bodhi" ("budh" meaning awakening or, enlightenment) hence, one on the way to Awakening.
In Mahayana (ཐེག་པ་ཆེན་པོ) Buddhism, a bodhisattva refers to anyone who has generated bodhicitta, a spontaneous wish and compassionate mind to attain Buddhahood for the benefit of all sentient beings. 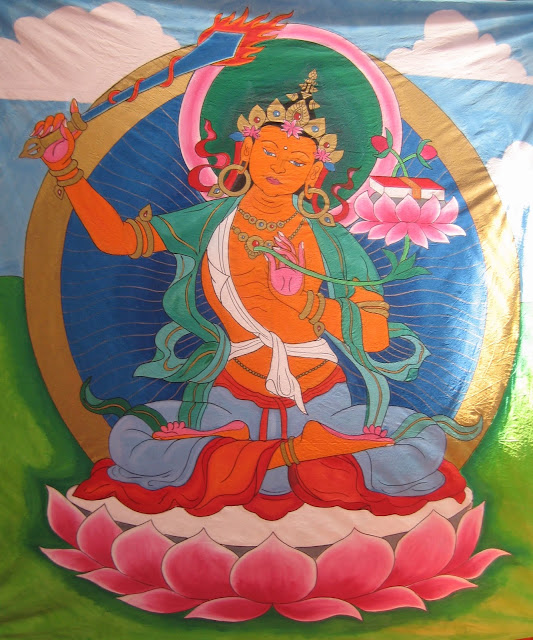 The embodiment of the knowledge and wisdom of all the buddhas, traditionally depicted with a sword in his right and a text in his left hand. 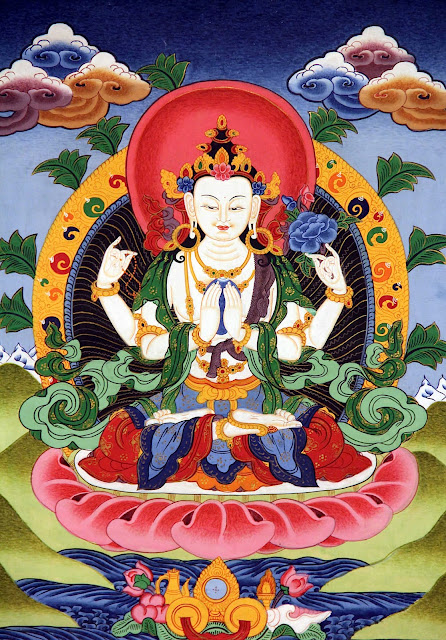 He is said to be the essence of the speech of all the buddhas and the incarnation of their compassion. He is usually depicted as white in colour and holding a lotus. 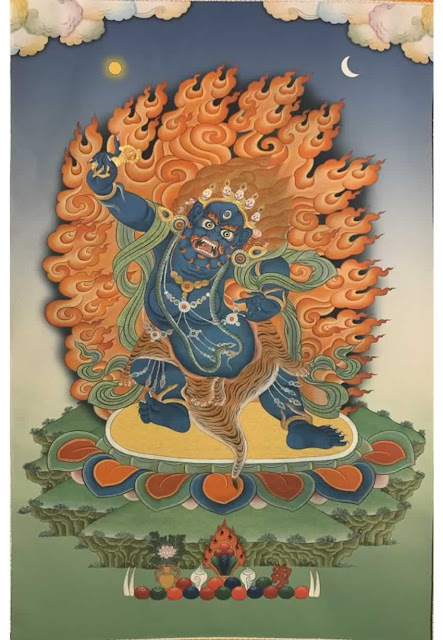 He represents the power of the buddhas and is usually depicted as blue in colour and holding a vajra. 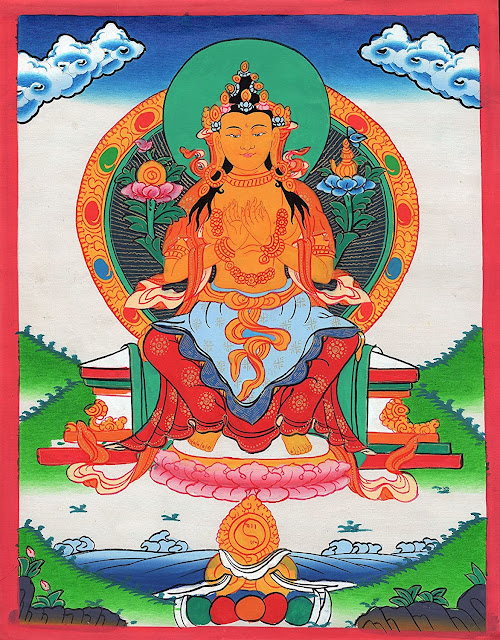 He is the bodhisattva who will be the next buddha after Shakyamuni Buddha. He is sometimes depicted as whitish-yellow in colour and holding an orange bush which dispels the fever of the destructive emotions. 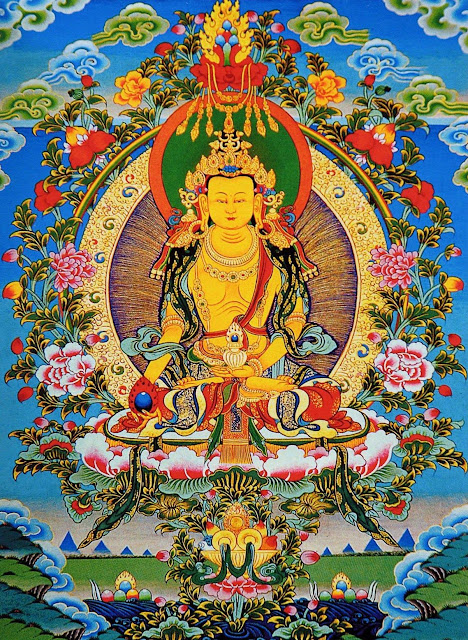 Having vowed not to achieve buddhahood until all hells are emptied, his activity focuses more particularly on helping those who suffer in the hell realms. He is often depicted as white in colour, holding a staff in his right hand and a jewel that symbolizes wisdom in his left hand. 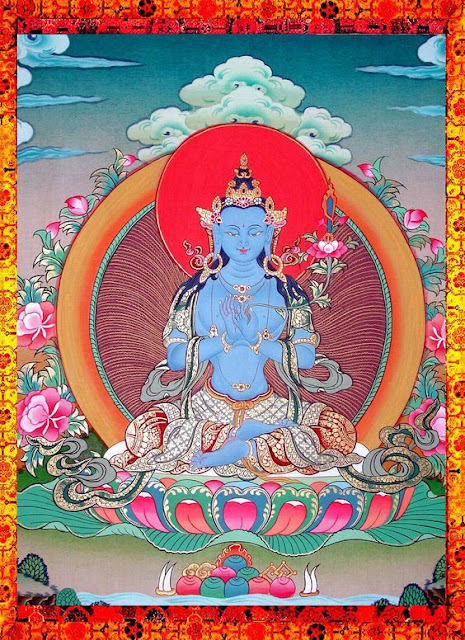 The name means 'nucleus of space.' He is associated with the element of space, as well as wisdom and knowledge similar to Mañjushri. He is often depicted as blue, yellow or green in colour and holding a sword to cut through the destructive emotions. 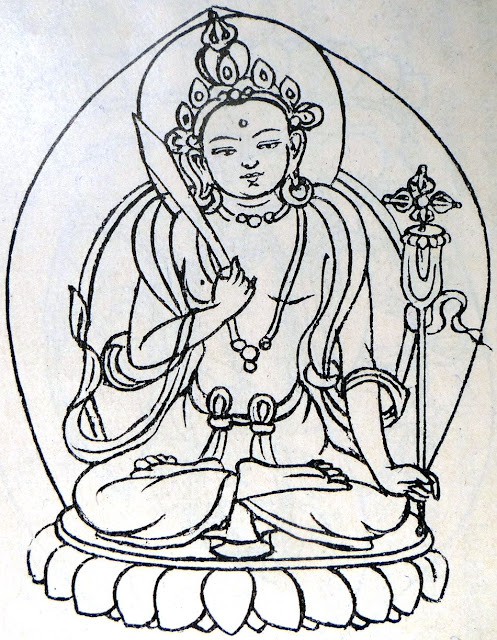 Guide-to-Liberation-Obstacle-clearer is usually invoked to clear the way.  Nivarana means hindrances and refers to the 5 kleshas:  desire, hatred, sloth, arrogance /suspicion, and doubt /confusion.  He attends Buddha Amoghasiddhi, the head of the Karma family considered to rule the northern direction.

He is royal blue with a moon on his lotus.  In the sutras, he is with Avalokiteshvara, praising him after their fortuitous meeting in Varanasi.
He is often depicted as reddish-yellow in colour and holding a wheel of jewels. 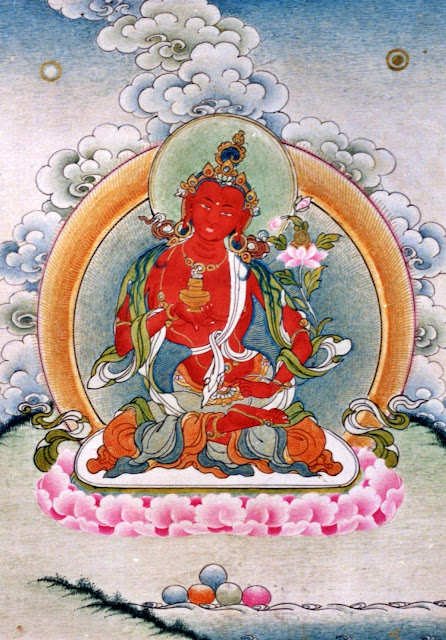 He is renowned for the vastness of his offerings. He is depicted as reddish-green in colour, and holding a corn-ear of jewels as a sign that he fulfils the wishes of all beings.
The Eight Bodhisattvas are usually characterized gracefully holding each of the emblems below:
·      Manjushri - blue utpala flower
·      Vajrapani – vajra
·      Avalokiteshvara - white lotus
·      Maitreya - naga tree
·      Kshitigarbha – jewel
·      (Sarva) Nivarana-vishva-kambin – moon
·      Akashagarbha – (blazing) sword