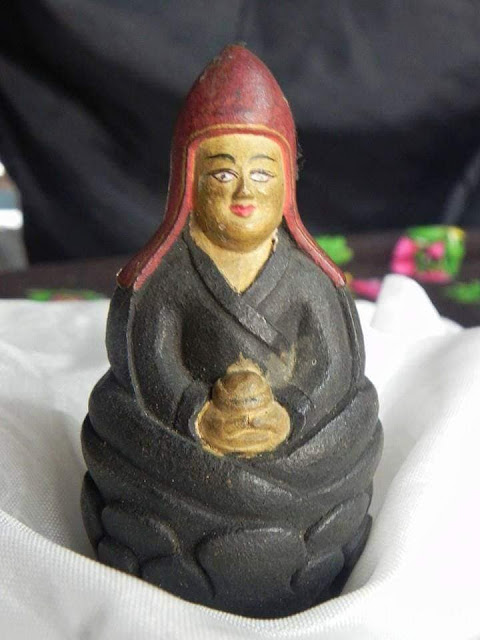 In the “Choekyi Namdrang Shejai Norling Jugpai Druzing” scripture it describes the hidden place of the “five terma representatives” of Guru Rinpoche.

It reads: “The distinctive image made of five precious metals, representative of (theGuru's) body was hidden in the cave of Samdrubphug of Kharigang (in Tibet).

The image made of special sand anointed with Sindhu's cotton cloth, which was therepresentative of (the Guru's) speech, was hidden at Senge Samdrub of Monkha(Paro Taktsang, Bhutan).

The image crafted of bell metal, the representative of (the Guru's) mind was hiddenin the Samdrubphug of Tandin Drakhung (in Tibet). 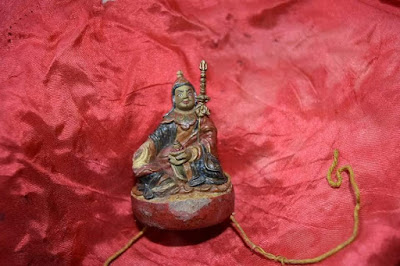 The image made of gold, the representative of (the Guru's) qualities was hidden at Samdrubphug of Lhamokhar (near Kalagangri in Tibet).

And the image made of stainless crystal, the representative
of (the Guru's) activities was hidden at Samdrubphug of Yar Lhashampo (in Tibet)”.

The benefit and significance of these terma representatives are related in a document compiled by Dasho Sangye Dorji. It states that as Guru Rinpoche was leaving for Sinyul, Muthri Tsenpo, the king of Tibet, prayed (for the Guru to leave some sort of
rememberance behind) whereupon the Guru left the five terma representatives made from five precious metals and the special sand of Lake Manasarowar (asacred lake in Tibet near Mount Kailah). 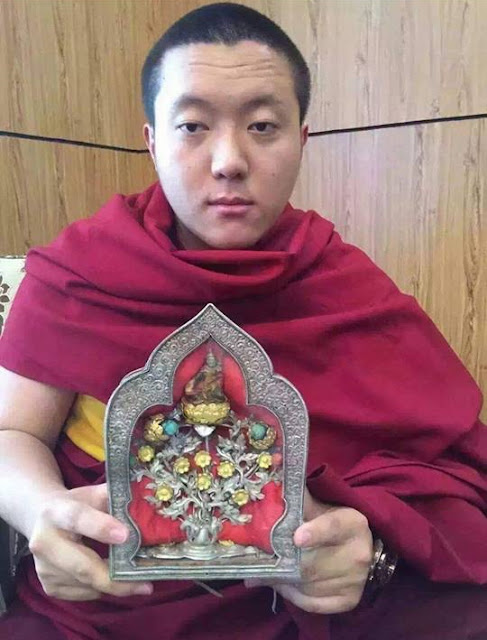 Of which, one of these was given to Lhacham Pema Sel (a daughter of King Thrisong Deutsen) to serve as her object of veneration. This object was subsequently hidden at Paro Kyichu so Pema Lingpa, who was the last rebirth of Lhacham Pema Sel, could rediscover it later.

As the result of the prophecies and prayers made by Guru Rinpoche, and after being requested by Pema Lingpa and his sons, Yongzin Ngawang Drakpa revealed a terma; a catalogue in which it is stated:

“Whoever sees it and gets its blessings,
Will be equal to (the experience of) seeing me, Padma, in person.
It will grant the common siddhi of whatever one desires,
And ultimately lead one to the presence of me, Ugyen.
Ceremoniously invited by host of dakas and dakinis,
One will be delivered to the excellent Celestial Palace of Lotus Rays.
Even the regions where the terma representatives reside,
They will have equal blessing and sacredness as Celestial Palace of Lotus Rays.
Where there will gather large hosts of dakas and dakinis.
The region will always be auspicious and filled with rich yield of crops and cattle
and be free of diseases, wars and famine”

Thus, as Yongzin Ngawang Drakpa states in the Yellow Scroll catalogue, which is part of the treasure share of Pema Lingpa, what Guru Rinpoche had prophesied. 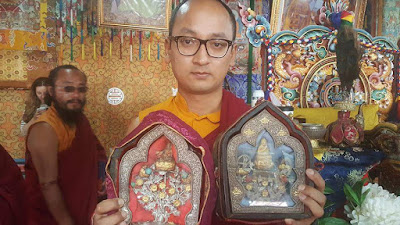 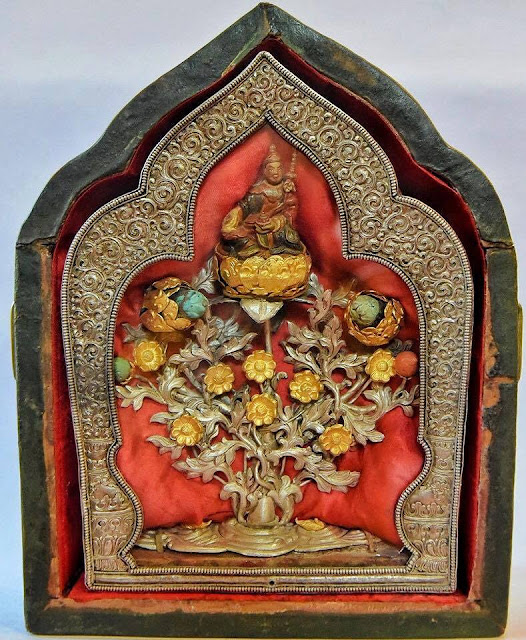 In a supreme place called Za Gyal Gowo Phu, the great assembly of Pema Jungney and thousands of his followers congregated to perform a sadhana based on the sutra of Du Pa Do with Mahottara Heruka the supreme compassionate king liberator as the main deity.

After opening the mandala of the sadhana and while conducting the practice of nectar medicine, the whole sky was filled with the manifestations of wrathful Heruka deities. The countless deities dissolved into the heap of medicinal substances. That time, the rays of aspirational prayers of the sentient beings and the wisdom rays of the Buddhas radiated and filled the whole world with scent that would liberate upon smell.

Whoever was present that time witnessing the whole mandala, heard the rituals, contemplated on the practice of the sadhana and touched the medicinal substances. A single spoon of that medicinal substance could be multiplied into one hundred thousand great substances and whoever tastes that, even a size of a sesame seed, all obstacles, diseases and sufferings would be removed. One would achieve the indestructible vajra life and excellent youthfulness. The blissful joy and wisdom would dawn effortlessly. The scope of dharma activity would be equal to that of Buddha Heruka. In seven lifetimes, one would attain complete freedom without much effort.
From within the heap of the medicinal substances, this Guru’s statue was naturally formed. This statue was the essence of the medicinal substances. The rays of compassionate light filled all sentient beings with awe.

Amazed, I (Khandro Yeshey Tshogyal) offered supplication prayers. That moment, all karmically assembled ones rushed and contested to grab their share. However, the fortunate share had descended upon me. I (Khandro Yeshey Tshogyal) have kept and made offerings for a long time. At the end, for the sake of future fortunate beings and karmically connected ones, for the great benefit of the limitless sentient beings to attain the siddhi, it was concealed in the place called Yod Bar Drag [Tib: ‘Od ‘bar brag]. 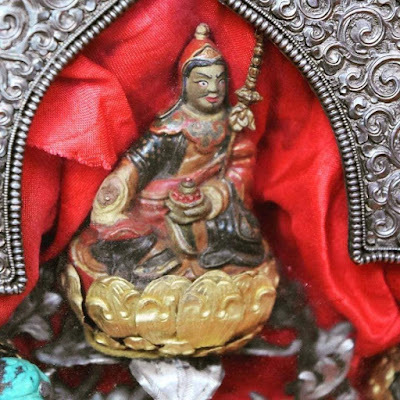 Whoever sees, hears, contemplates and touches this statue, there is no difference in meeting Guru Pema in person. All fear, suffering and unfavourable obstructions would be removed. Supreme and ordinary siddhi would be effortlessly bestowed to whoever supplicates. This wish fulfilling jewel is the supreme field of offering for gods and human. Wherever this statue resides, dharma would flourish. The ocean of three roots and dharma protectors will gather like clouds. The virtuous aspects of gods, human and nagas will spontaneously gather. The signs of great benefit to the universe and its beings will show without residue. The essence of dharma will prevail for a long time.
Whoever beautifies the face and eyes of this statue, the dharma activities of that person will flourish and also this statue will bear greater benefit to the sentient beings.

From each remaining particle and substance from which Guru Nyuldrub Pelbar [Tib: dNgos grub dPal ‘Bar] was made, countless representations (kutsabs) could be made by mixing the substances with precious jewels, earth, sand and plants. Whoever supplicates and makes offerings to the kutsab, the signs of blessings would show to the devoted and faithful ones. Wherever the kutsab resides, the place would prosper in good fortune.

The master of absolute compassion, Guru Pema has left testament that his blessings would be certain and swift. The wise and learned should keep in mind the benefit of the kutsab and follow the instructions accordingly. 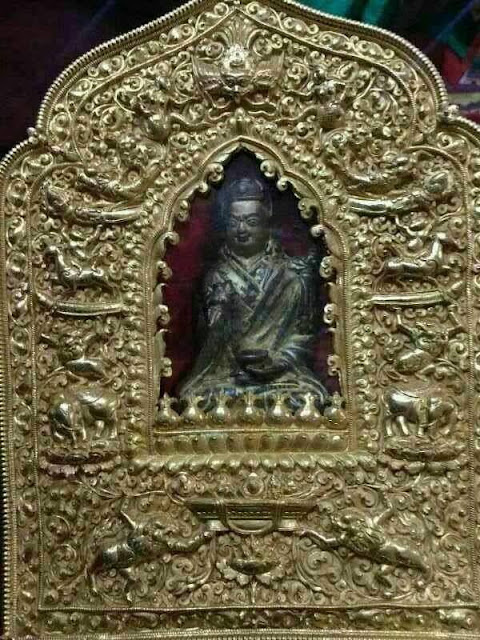 Therefore, unlike any amazing previous experiences, the essence of this kutsab is supreme. Thus, it is concealed in no other place than Yod Bar Drak, the assembly place of dakinis. It is concealed for the benefit of fortunate sentient beings in future and as a source for countless wish fulfilling jewel to appear. It is also concealed as the founding seed of benefit and happiness. Use these solemn words in a proper way – Samaya rGya rGya. 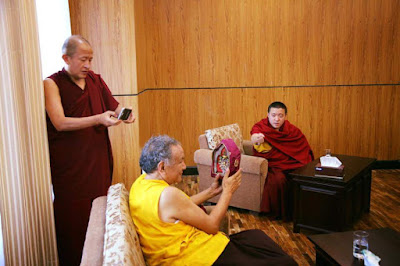