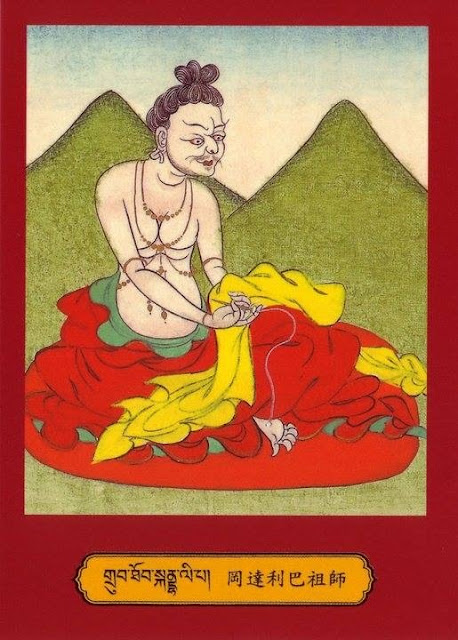 Kantali was born to a miserable trade of stitching rags together into reusable cloth. One day, he accidentally cut his finger and it bled profusely on the cloth he worked on for hours. Driven beyond endurance, he ran out to the forest, began to roll on the ground tearing at his hair and howling like a wounded animal.

The dakini Vetali took pity upon him and appeared to him as an old woman. He told his tale to the dakini, and she replied, “what your story tells me is that you have suffered some great pain in your past life. And I fear that in your next life and the next and the next that pain will hound you like your shadow hugs your heels. There is nothing but pain to be found on the Wheel of Rebirth.”

In despair, he begged the dakini to show him how to avoid such terrible fate and promised nothing would hinder him from following the instructions. There and then the dakini gave him the Hevajra initiation and empowerment. She instructed him on the four boundless states of mind and taught him the yoga of identification with the guru as well as fulfillment yoga.

Kantali returned home and did his best to follow, but his mind kept wandering back to work again and again. Once more the dakini appeared to him and sang  a song of guidance to him: 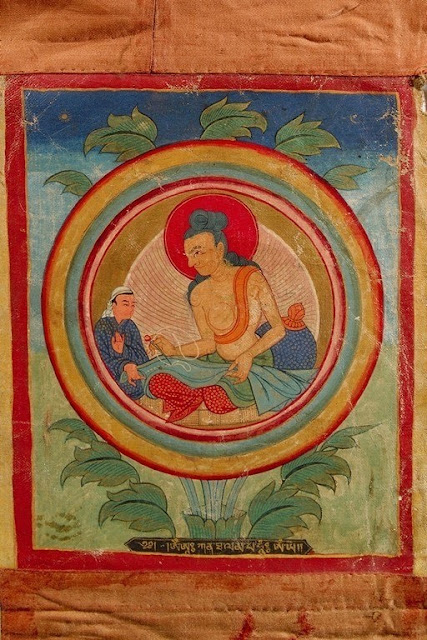 Kantali returned to his work in great peace and realized the emptiness of all the elements of experience. When he understood that compassion and emptiness were one, he gained mahamudra-siddhi. Working selflessly for others for many years, in time, he ascended to the Paradise of the Dakinis.
By Phub Dorji Wang at March 12, 2020
Email ThisBlogThis!Share to TwitterShare to FacebookShare to Pinterest
Newer Post Older Post Home