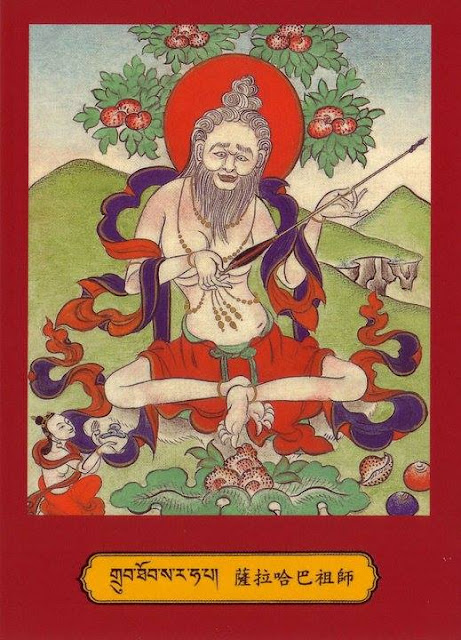 Saraha, the son of a Dakini, was born in the east of India in Roli. He observed the laws of the Brahmins by day, and he received instruction in the tantric mysteries from Buddhist masters by night.
However, Saraha enjoyed spirituous liquors, which were forbidden by Brahmin law. Eventually, this was discovered and they were outraged by his behavior. 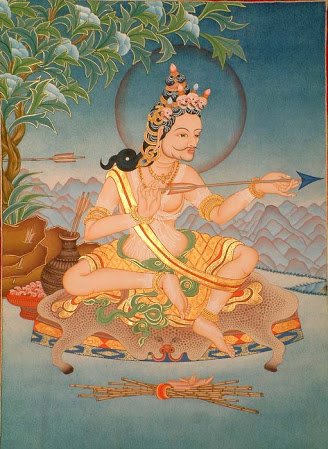 They brought this up to King Ratnapala and demanded he be deprived of his caste status. However, the king was a reasonable man, and decided to investigate the matter himself. When asked by the king, Saraha replied, “I do not drink. If you doubt me, gather together the Brahmins and all the people and I’ll prove it.”

And so, a large crowd gathered, and Saraha announced a series of trials to prove his innocence. He placed his hands in hot oil and drank a bowl of molten copper, but he was unharmed. Later he jumped into a tank of water stating the liar will sink, and true enough the Brahmin that jumped into the tank with him sank. 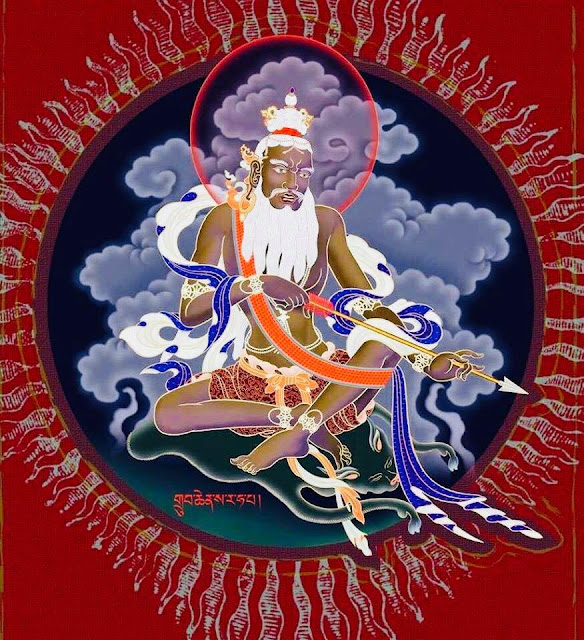 Then to clear more doubt, he ask for the two of them to be weighed and the lighter of the two was the liar. When weighed, the Brahmin who was twice the size of Saraha, was much lighter than Saraha. 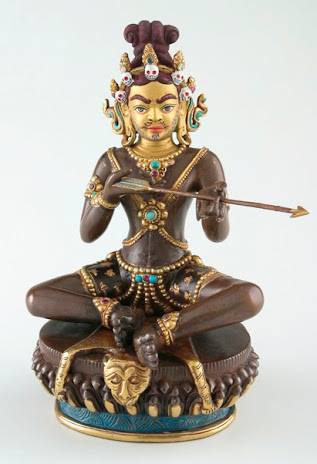 At this point, the king stepped in, pointed to Saraha and said, “If this venerable being drinks, then may he continue to do so for all time.” And with that, the king prostrated before Saraha, followed by the entire Brahmin.

Saraha then took a 15-year-old girl as his consort and moved to a distant land, where he practiced his sadhanas in isolation. One day, he told her to cook him radish curry. However, he began meditating which continued for 12 long years. When he woke to the outside world, he bellowed, “Where is my radish curry?” So astonished was his dakini consort that Saraha decided to move to a mountain hermitage to continue his meditation properly, but his consort questioned him, saying that if he awoke from Samadhi and still possessed an undiminished desire for radish curry, what good would the isolated mountains be for him? 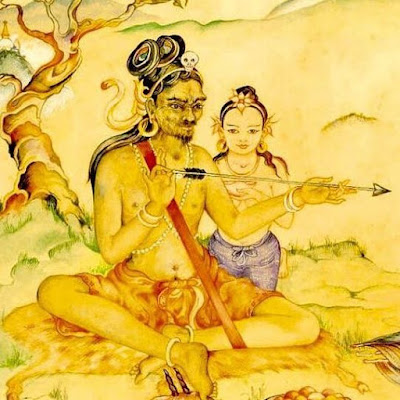 She then continued, “The purest solitude is one that allows you to escape from the preconceptions and prejudices, from the labels and concepts of a narrow, inflexible mind.” He listened carefully and began to devote himself to ridding his mind of conceptual thoughts and belief in the substantiality of objective reality. In time, he attained the supreme realization of Mahamudra and spent the remainder of his life in service to others. Upon death, Saraha and his consort ascended to the bliss of the Paradise of the Dakinis.