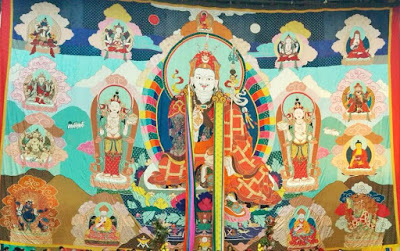 The Paro Tshechu Thongdrol is dedicated to Guru Rinpoche.
In the Thongdrol the main figure is Guru Rinpoche. He is flank by his two spiritual consorts and surrounded by his eight manifestations. It also includes Buddha Amitabha, Avalokiteshvara, Namgyalma, Zhabdrung Rinpoche and Lam Ngawang Rabgye (who did the Thongdrol art work). 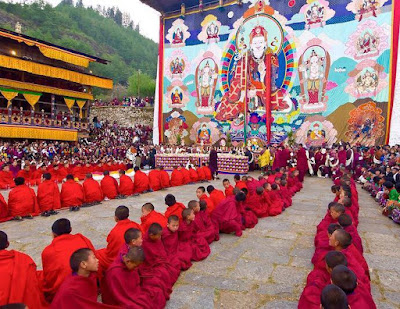 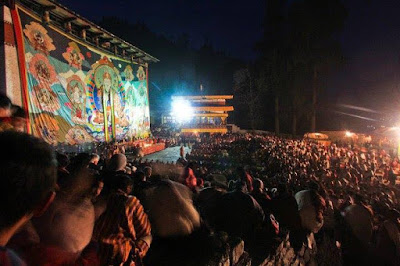 I too had an opportunity to witness this great Guru Rinpoche’s Thongdrol.

History of Thongdrol
A Paro Chila (a monk official deputed to oversee monasteries in frontier districts) disguised as a trader, went to procure the Thongdrol materials from Lhasa. As luck would have it, he ran into the treasurer of Lhasa on his arrival. Soon, the two had a bet as to whose gold was the best.
That night a mystical man is said to have appeared before the chila and offered him a piece of gold for the forthcoming competition. Surely enough, the next day as the two men sat together to determine the comparative quality of their gold, the chila won the competition. 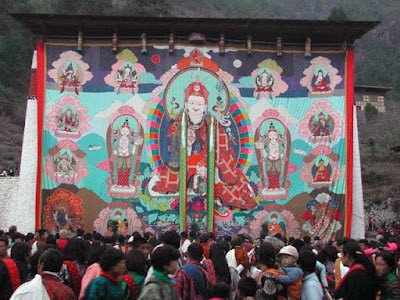 As the loser, the Lhasa treasurer provided the chila with all the necessary brocade to stitch the thongdrol. However, later it so happened that there was not enough material to stitch the face of Guru Rinpoche.
At that moment, two dakinis appeared to help, and they fetched the necessary materials from Shab Ribar Chum’s house nearby.
Because of such assistance from mystical man and the celestial Dakinis during making of the Thongdrol it is therefore considered very unique in the country and is a great national treasure.
Its special status is further enforced by the fact that it was stitched by non other than the greatest master of applique works, Lama Ngawang Rabgye. 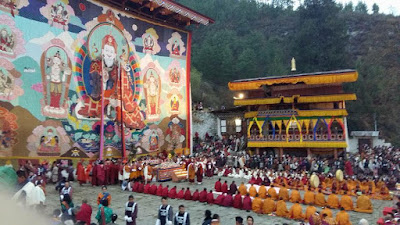 So friends wait for the next Paro Tshechu and make a point to watch especially Guru Rinpoche’s Thongdrol.
By Phub Dorji Wang at November 15, 2019
Email ThisBlogThis!Share to TwitterShare to FacebookShare to Pinterest
Newer Post Older Post Home