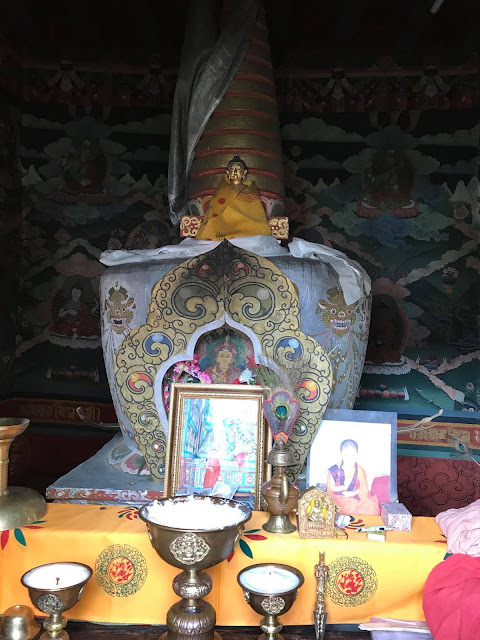 Very happy, I managed to visit the Terton’s last rites site at Chapcha and his kudung chorten.
Terton Drukdra Dorje was assassinated at Trongtrongna at Meritshemo, Chukha by killer agents dispatched by 8th Desi, Druk Rabgye (1707-1719).

After assassination his dead body was carried to show to Desi who had asked to bring to confirm his death and thereafter to conduct cremation. On their journey carrying Terton’s Kuphung they reached Chapcha Dzong and took a respite. Chapcha Penlop who was a great devotee of Terton Drukdra Dorje received the Kuphung and the entourage with great sense of loss. In fact for quite some years before Terton escaped miraculously from Chapcha to southern Bhutan, Chapcha Penlop kept away Terton Drukdra Dorje from the eyes of Desi’s search team. During the day, the Penlop kept Terton at the attic of the dzong and in the evening he was secretly brought back at the altar room, offer bath and foods.
At times when someone leaks Terton’s whereabouts, the Penlop quickly and secretly dispatches Terton from the Dzong complex to some caves above the Dzong. After the Desi’s search teams leaves, again the Penlop bring Terton secretly back inside the dzong.
“It is not at all easy task for the Penlop to keep the most wanted Terton at Chapcha” says Ap Damchen Gyeltshen, 74 who I interviewed.
Thank you people of Chapcha for taking care of Terton.

Meanwhile they kept the Kudung on a flat rock near the dzong. (I was literally locating this scared flat rock, as it was not in its place. Sadly it was removed and placed above on a slope likely to be used by Community School as stone soling. I thought of telling not to do this but no one was there. However, I told Chorten Caretaker to preserve it).
The Chapcha Penlop provided refreshments and served lunch to the entourage.
After lunch when they started to move they could not lift the Kudung, it gained weight. An attempt was made by eight abled men together to lift but it didn’t move at all.
It is said that Je Ngawang Drukpa of Tshamdrak Monastery knew through his telepathic mind and realized that the Terton’s Kudung was destined to be cremated at Chapcha. I strongly felt that due to good deeds done by Chapcha Penlop and kindhearted people of Chapcha, Terton chose to remain there to turn into elements.
Je Ngawang Drukpa came and cremated Terton Drukdra Dorje’s body on the flat rock where it was kept.
Besides this rock, a Kudung Stupa of Terton Drukdra Dorje was built with Terton’s ash as its main relic inside.

Legend has it that after cremation of Terton’s Kudung, many Dakinis appeared and started carrying away all ashes. Je Ngawang Drukpa with his wish of having an object of veneration for the people managed to scoop a handful of ash. This ash was used as a main relic inside the Kudung Chorten. 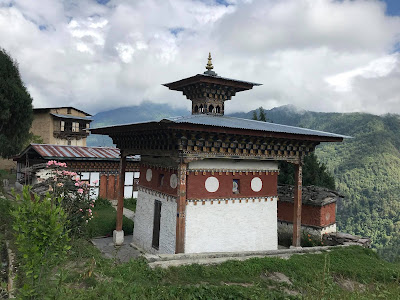 I was fortunate to visit this sacred site and receive blessing from the Kudung Chorten. My traveling Guru was also connected to it. 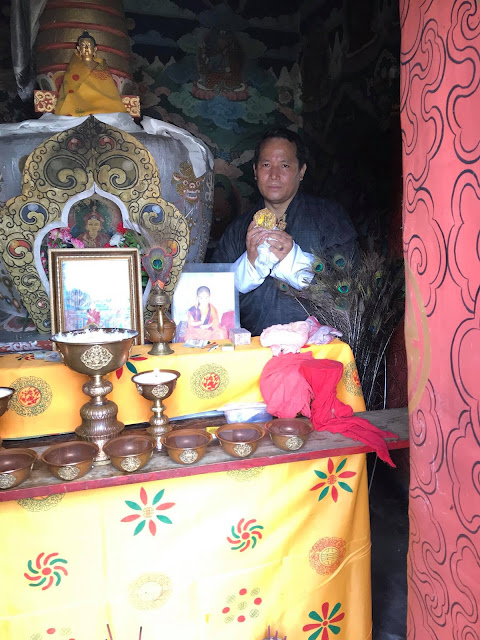 It really took sometime to find an elderly people to hear the story and caretaker to offer the butter lamp.
I was told every year on the tenth day of seventh month the local people gather here at the Kudung Chorten and offer prayers.

Please visit the Kudung Chorten and receive blessing.
If you want to visit, you have to travel through old Damchu Chapcha road and after reaching Chapcha Dantak Camp take feeder road that will take you directly to the old Chapcha Dzong. Nearby the Kudung Chorten is located.
HAPPY HOLY VISIT.
By Phub Dorji Wang at October 29, 2019
Email ThisBlogThis!Share to TwitterShare to FacebookShare to Pinterest
Newer Post Older Post Home