Silung Gonpa, an unknown monastery to many but is very sacred monastery that was built by Drupthop Thangtong Gyalpo in the fifteen century. 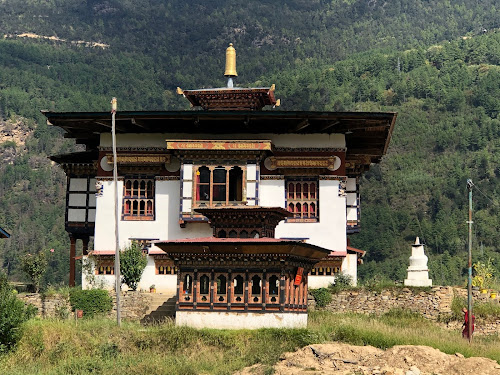 I have heard about this monastery before but couldn’t get an opportunity to visit. This time as luck would have it, our company’s monthly Kurim was conducted at this sacred monastery. So I was thrilled to come to this monastery to organize the Kurims. 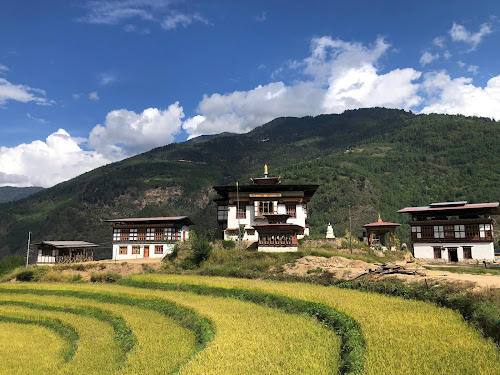 Silung Gonpa is formally called Silung Gönpa Pekar Chöling. It is exactly 20 Km from Chuzom on the way to Haa. After that taking a left turn one has to drive down to the last terrace of the valley and literally the road also end at the monastery compound. 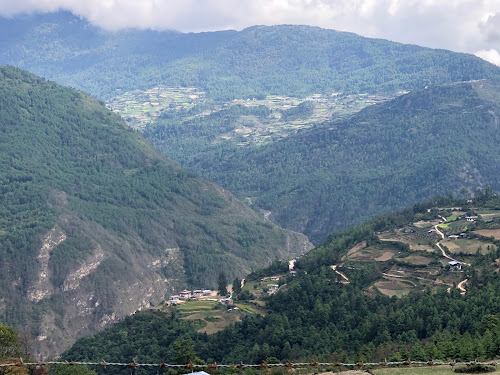 The first thing you see  is a small lake that is lightly fenced and a big cypress tree near by. The lake has a story. 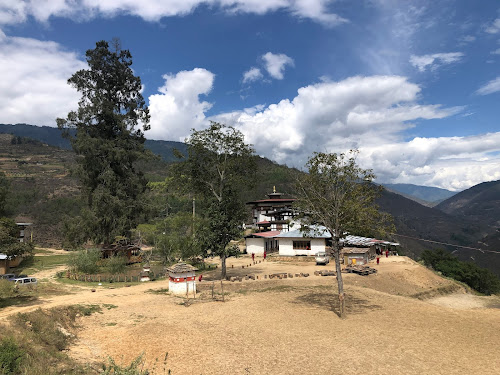 According to Lam Kunzang Tobgay of the monastery, the village where the Silung Gonpa initially located is known as Changchi. 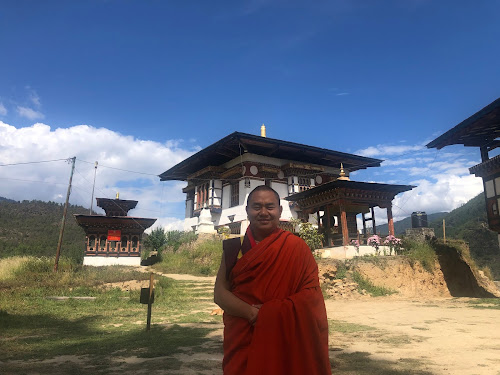 In the era of Drupthob Thangtong Gyalpo some 600 years back, a deadly Domney (life threatening illness) plagued this village and Drupthob visited this place to eliminate this deadly illness. 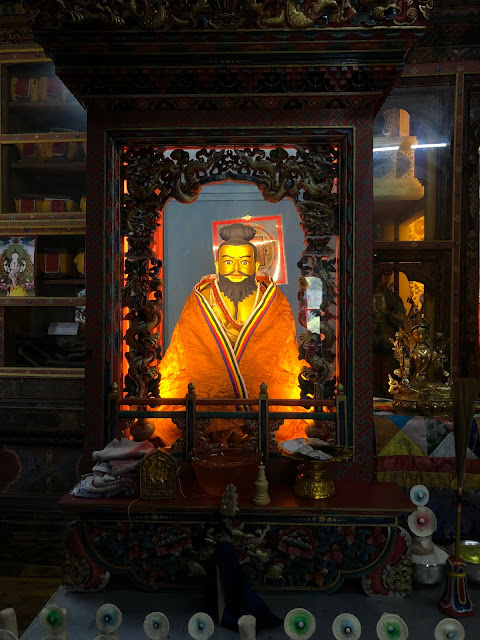 On his approach Drupthob felt the need to build a bridge over Wangchu River to cross. Selecting the best location at a place called Chakzamding near  Tiru Jag  (Money cliff) at the lower end of Silung  Gonpa and the other adjacent place is Damchu, Drupthop Thangtong Gyalpo  built an iron chain bridge.

So in this part of the region Drupthop Thangtong Gyalpo built three bridges, Paro Tamchok Zam, Changchi Zam and Chukha Zam out of which only Paro Tamchok Zam is still functioning after the major renovation  work done by His Majesty the Fourth King Jigme Singye Wangchuck.

People in the course of time stole many iron chains from this  Changchi Zam due to huge demand of Thangtong's iron Phurba from outside the country. This iron chains is believed to be personally made  by Drubthob himself. Some remaining ones were taken in 2005 to restore Tamchog Chakzam. The one retrieved and stored at  the monastery has an interesting tale to note.

According to Lam Kuenzang, when the previous Lam and students felt the need to dismantle the remaining iron chain and place at the monastery as relics, they  made an attempt to dismantle and tried to pull the heavy chains, but it did not moved a bit. Even to tilt the chain was a big task. After much discussion they have decided to placed the sacred Drupthob Thangtong Gyalpo statue facing the iron chain and check their luck. On doing so, they could easily pull up the all the remaining iron chains. Such was a blessing of Drupthob Thangtong Gyalpo.

When Drupthob Thangtong Gyalpo came to this place riding on a horse, a Mara manifested to a deadly python and blocked the path. Drupthob fearlessly paced his leg on the python and with his hands showing the posture of mystic contemplation in the four directions, subjugated the Mara by uttering the powerful mantra ཧཱུྂ (Hung).  Because of this the place is known as Hungrelkha. It is located on the left side of the temple toward a cliff; it is 30 minutes walk from the monastery.

In this area there is a footprint of Drupthob Thangtong Gyalpo and a hoof print of his riding horse.  Footprint of Drupthob was brought to the temple by Lama Paljor (precious lama) and his students and presently housed along with iron chain links inside the monastery on the first floor.

During that period it is said that there was  very ferocious Mermaid (Tsomen) lake in Hoshar which is located in the mountain above the village. Whenever the lake gets polluted or defiled, the Tsomen unleashes heavy rains and hailstorm that destroys all crops in the village and in consequences the people undergo very hardship life. The continuous negativity of the Tsomen action made the villagers to decide to drive Tsoman away from the lake. So more contamination was purposedly done on the lake by way of dumping dead bodies of dogs, horses, and even humans into the lake and fulfilled their mission.

The two Mermaids, a mother and a daughter then flew to Dakarla as there are many lakes, but as the  daughter had problems with her legs she collapsed near the Silung Gonpa. At the fall of her here it gave the rise to the present lake that is seen near the monastery. 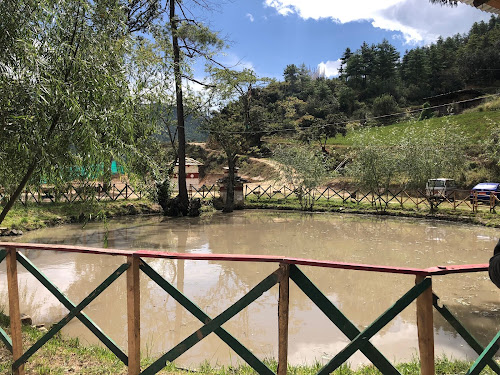 The mother knowing that her daughter can't continue her journey and also finding  Drupthop  Thangtong Gyalpo residing nearby she felt relieved and told her daughter to stay here peacefully and advised her to stay as Sungma of Drupthop Thangtong Gyalpo. She than left her a pair of golden rings, known as ser-gi, in Dzongkha, to be known as Silung. So place was known as Sirlung because of this event.  The mother left to Darkala and amongst the 108 lakes, she had chosen the biggest lake which is known as Yum Tso.  According to Lam, every three years the village people gathered near this small lake to appease the mermaid  there and also inviting the Mermaid (mother) of Darkala Yum Tso.

Later, when Drubthob Thangtong Gyalpo built the two-storied monastery, he adopted the name of the lake "Silung" for his Gonpa.

Entering the Gonpa, on the ground floor three is set of sacred Tenjur.

Lama Ngawang Drukpa, a great master of Tshamdra monastery made Tenjur writing paper for three sets of Tenjur from one single Delso tree. Today, one set  of Tenjur is in Thimphu Tashichodzong, one is at Tshamdra Monastery and the other is here at Silung Gonpa. This is a scriptures relics. The Tengyur or Tanjur  (Translation of Teachings) is the Tibetan collection of commentaries to the Buddhist teachings, or "Translated Treatises".

On the first floor is well-decorated room. The main statue is the Sakyamuni Buddha with thick volume Kanjur placed on both side of the Buddha.

In the front there are two specially made one-statue altars where a unique statue of Drupthob Thangtong Gylapo and Zhabdrung Ngawang Namgay was housed. 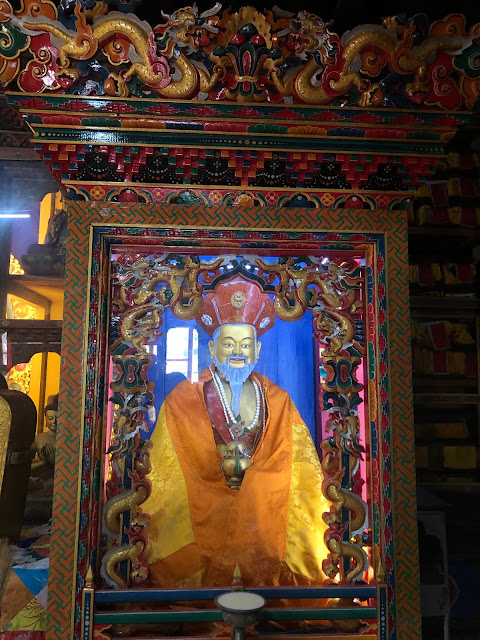 The statue of Drupthop Thangtong Gyalpo looks very stunning as if it is going to speak. One has to visit the monastery to realize it. 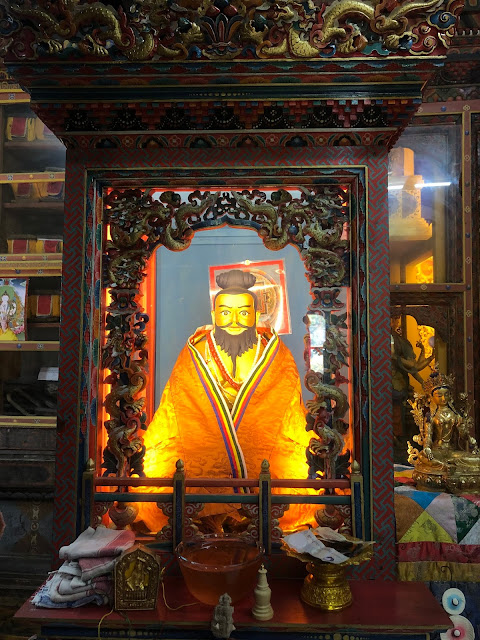 On the left side of the Buddha statue, good stock of Drupthop Thangtong Gyalpo’s iron chain was kept. Each chain is around one foot in length and without joints. Inside this shelve the footprint of Druthop Thangtong Gyalpo was also kept. Received blessing from both and connected my sacred objects with the sacred artifacts. Lam Kuenzang took my sacred objects and blessed the people there. 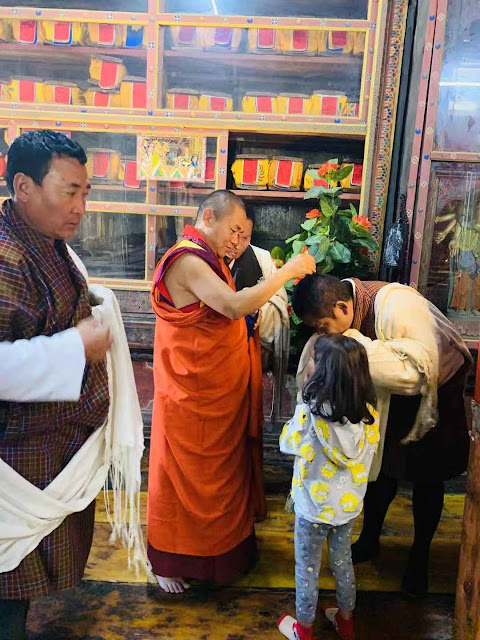 In another room on the right side of Buddha is the Goenkhang where Aum Ngarsum (Ekajati) and Tsoman are housed. Received blessing from it and recited a joint prayer with Lam. 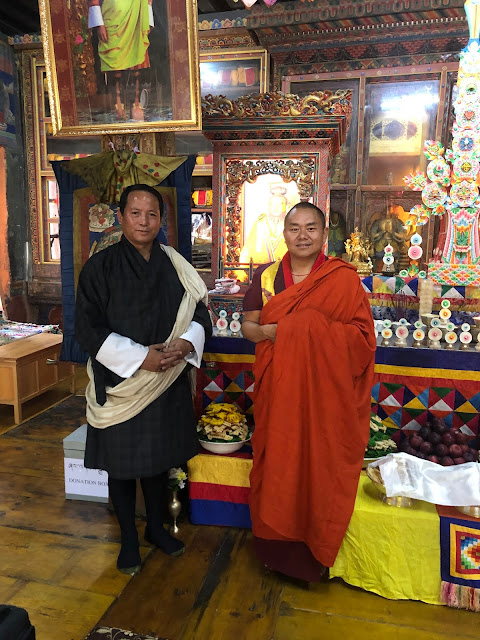 In another room there is a museum which interest me a lot. And I am seeing first time a museum in the monastery.

There are so many old antique items of cookware, dishware, carry wares, religious items etc. Amongst them the Crown of Lama Ngawang Drukpa and the five Nga (Drum) of Tsamdra Monastery attracted me the most. Especially the five  Nga are the five of the 108 Nga made from a single tree by Lam Nawang Drukpa. This Nga is a relic.

That ends the visit of the sacred monastery.

Outside near the small lake there is a big cypress tree, which is grown from the staff of Drubthob Thangtong Gyalpo. 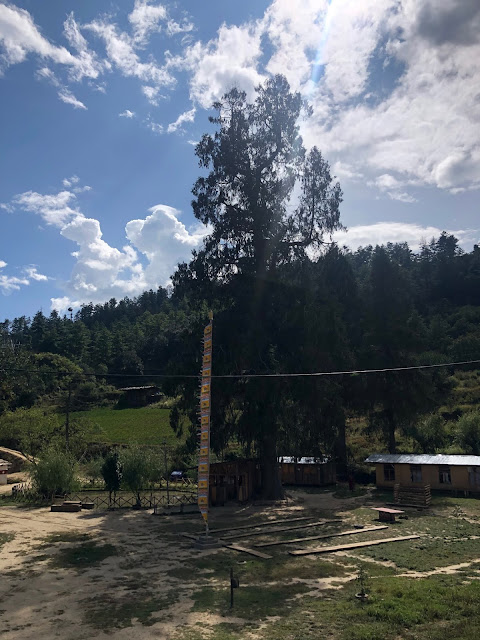 The present Lam Kuenzang Tobgay took over the monastery few years back as his summer retreat, the winter being the Pasakha monastery. 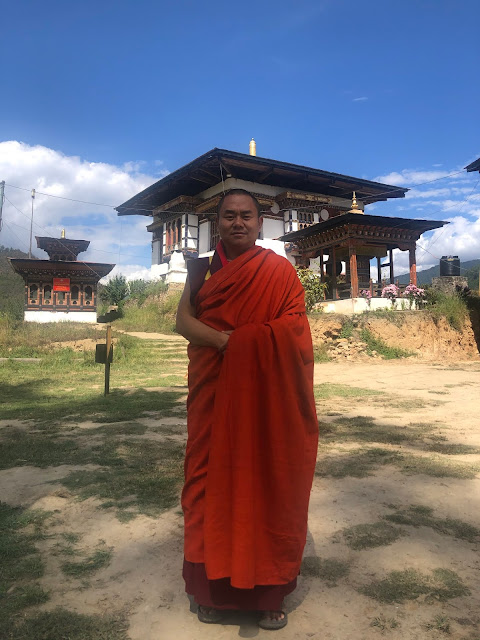 He had carried out many developmental works expanding the monastery due to increase of monk enrollments. There are more than 170 monks under him.  A big monastery is under construction above the present monastery. 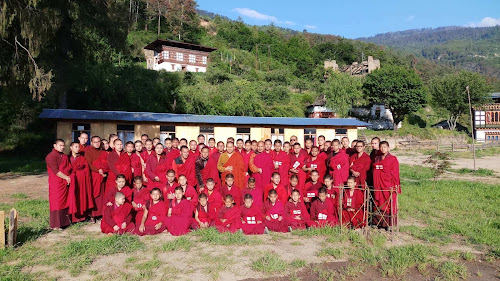 Further, a gentleman (forgot his name) told me that below Silung Gönpa, there is a sacred place called Chakzam Ney in a cliff near the river where there is a source of water with medicinal properties that is believed to cure tuberculosis.

Will surely visit that place and other many holy sites nearby one day. For now I am singing off.

There are lots to see at the monastery and many neys are located  nearby. Please visit and see yourself the story that gradually unfolds to you.