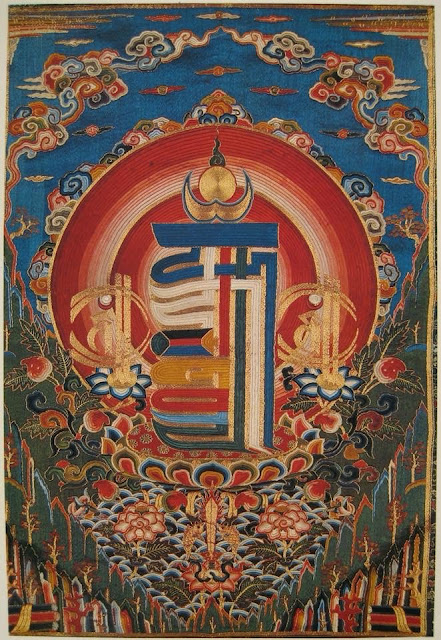 I am sure you must have seen Nam Chu Wang Den, generally called Kalachakra Symbol. But do you know what actually does it symbolize?

Well “Nam Chu Wang Den“ or “Tenfold Powerful One” is a symbol of Kalachakra (Cycle of time or wheel of time). In Bhutan this powerful symbol is mostly found painted at the entrance door and as such it is widely known as the Go Sung.

The symbol contains seven-knotted symbol or spell in Sanskrit written in Lantsa script and is crowned with the symbol of the sun, the moon and the Ame.

It is believed to be a powerful protection against inappropriate death, bad behavior and evil energy attack. It also protects from negative energies, reduce sufferings and increase good fortune.

Let us look at the symbol and go little deeper into it because we should know this. It is important.

The Nam Chu Wang Den is composed of ten individual letters stacked together. Let us see from the bottom up as under. Refer the illustrated diagram for clear understanding. 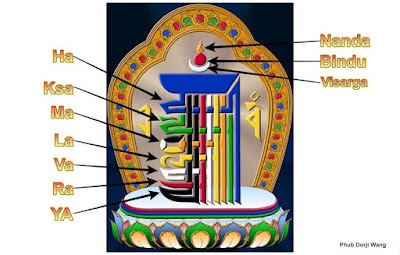 Color code is also very important. When you see Green Color, see all green colors in that diagram to get the full lantsa letter for the particular word.

The same symbol can be interpreted in three groups as under:

1. Nam Chu Wang Den in terms of the realms of the external worlds.

Ra (red color) is a symbol of the fire element, which originates from the heat of the forceful collisions of the winds arising from every direction of the wind mandala.

Va (white color) above that is a symbol of the water mandala, which originates from the descent of the continuous rain of the dense clouds in the sky produced by the heat of the fire mandala.

La (yellow color) above that is a symbol of earth mandala, which originates from the division into a triad of greatest, middling, and inferior universes that occurs because of the churning by wind of the that great mass of water.

Ma (color full) above the preceding grouping of components is a symbol of the desire realm.

Ksa (light green color) above that is a symbol of the realm of subtle form.

Ha (blue color) above that is a symbol of the formless realm. These three are symbols of the realms of the animate contents of (of the external so-called container world).

Visarga (white color) is a symbol of the moon mandala.

Bindu (red color) is a symbol of the sun mandala.

Nāda (blue color) is a symbol of planet Rāhu

2. Nam Chu Wang Den in terms of realms of the inner kālacakra

The internal Kalachakra the city of the adamantine body is formed with a nature of progressive stacking.

This is the same way that external objects come into being, thus the nature of the coming into being of the both the internal and external Kalachakra are established as essentially identical.

The aspects of the ten letters that comprise the stack of letters in the monogram can be correlated with the internal Kalachakra, the city of the adamantine body.

Firstly, the fluctuations of karmic winds cause the parents to come together and copulate.

Ya at the bottom of the stack is a symbol of the wind element.

Ra above that is a symbol of the fire element, and refers to the heat of desire present when the parents copulate.

Va above that is a symbol of the water element, and refers to the ejaculation of semen due to the intensity of the heat of desire during the copulation of the two parents.

La above that is a symbol of the earth element, and refers to the foetus becoming hard and obstructive, when the parents' regenerative fluids fuse in the womb. This is how the progressively stacked mandalas
of elements are correlated with the internal Kalachakra, the city of the adamantine body.

Ma above that is a symbol of the basic constituent of the grouping of the six sensory consciousness (e.g., tactile, olfactory, auditory, gustatory, visual, and mental sense perceptions).

Ksa above that is a symbol of the basic constituent of the fulfillment of all of the aggregates, psycho-physical bases of perception, and sense-spheres.

Ha above that is a symbol of the basic constituent of the empty space of the openings on the exterior and interior of the body, the pathways through which bodily strength, excrement, and so forth travel.

Visarga above that is a symbol of sentient beings' life force and right lateral channel.

Bindu is a symbol of sentient beings' heat and left lateral channel.

Nāda is a symbol of the wind and mind, and the central lateral channel.

3. Nam Chu Wang Den in terms of the realms of the alternative  Kalachakra.

The concept of Alternative Kalachakra refers to the configuration of divine mansions and deities associated with the practice of Kalachakra. 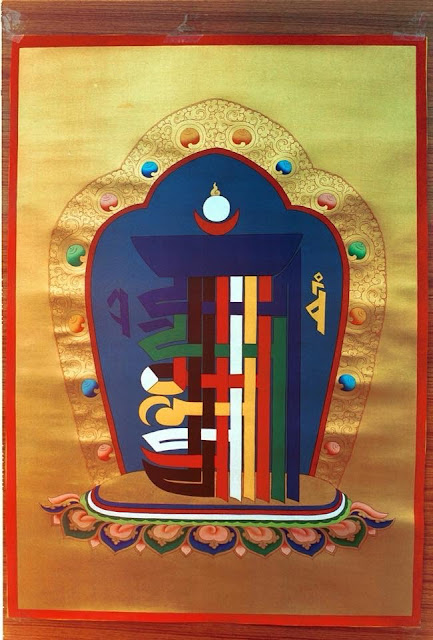 This is further subdivided into the configuration of palatial mansions, the figures of deities, the principles, philosophies and enlightened energies they represent, and the various practices of tantric meditation to actualize the divine elements.

The ten letters symbolize the different aspects of enlightenment.

The Namchu Wangden is drawn on eight layers of seat representing the four natural elements and four heavenly bodies. It is often flanked by the syllables E and Vaṃ, which represent the enlightenment energies of wisdom and compassion.

It is believed to bring blessings to the object and the user, and also clear away misfortunes and problems.

Please have it printed and placed at your house, offices, cars etc and receive continuous blessing.

At the same time recite the Kalachakra mantra whenever you see the symbol.

The first four syllables OM AH HUM HOH of this mantra are the four-vajra syllables of the body (OM), speech (AH), mind (HUM), and wisdom (HOH).

The next two syllables, HAM and KSHAH are the bija syllables for the father Kalachakra (HAM) and, correspondingly, his consort Vishvamata (KSHAH).

The syllable MA is the basis for the inestimable mansion of Kalachakra.

The four syllables LA VA RA YA stands for the 4 elements of earth, fire, water, and wind. HUM PHAT represents an offering of blessings; with the wish that hearing this powerful mantra and chanting it bring supreme benefit for all sentient beings.