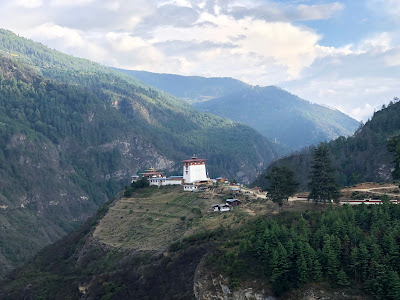 Dordey Chökhor Dzong is a famous non-functional Dzong known by many due to the fact that it was once used as Bhutan’s Central Jail in the late 1970’s. Many dzongdags who have embezzled government funds were confined here including murderers and black magicians. People still jokingly quizzes as ‘ which is the Dzong in Bhutan that has many Dzongdags?”   I have visited this Dzong in early 1980’s with son of Dasho Nub Tshering, who was then the Jailer at the prison. At that time I was young and studying at Dobji Primary School. I vividly remembered seeing so many prisoners (approximately 60 plus) and policeman. One can hear the intense sound of chains of moving prisoners who will rush at the locked entrance to see the visitors. 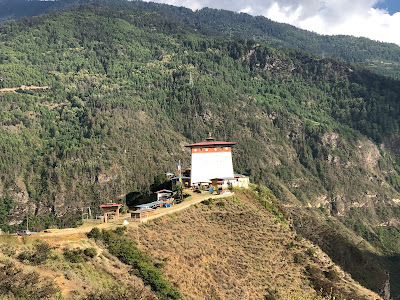 Dordey Chokhor Dzong was built by Lama Ngawang Chogyal  (1465-1540) in the 15th Century. It was perched on the edge of the cliff on a unique ridge. It is located on the other side of Dawakha, 5 Km drive from Chuzom to Haa Road and than taking a feeder road one can reach right next to the Dzong.  The Majestic view of the Dzong is also visible from Damchu, Phuentsholing road. 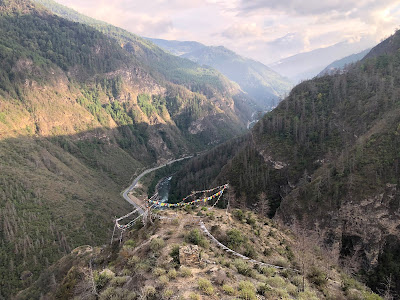 According to his chart, Lama Ngawang Chhogyel sent a valuable statue of Jetsuen Milarepa from his residence Druk Ralung to Tshamdra Gonpa on the request of Lama Ngawang Drukpa. After reaching the statue here at Dordey Dzong the Milarepa holy water has emerged.  This site was then selected as a religious center and constructed the Dzong with the help of Tibetan carpenters.  Accordingly, Lama Ngawang Chhogyel made a seat there. Later the people of Dawakha took care of it by appointing the caretaker of the temple for management works. 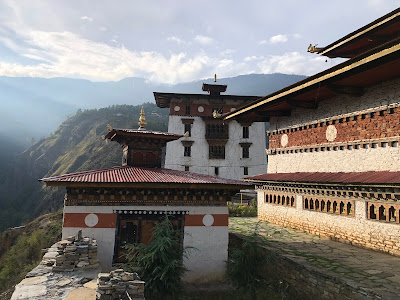 To the convenience of the visitors the holy water of Jetsun Milarapa, which is located deep in valley 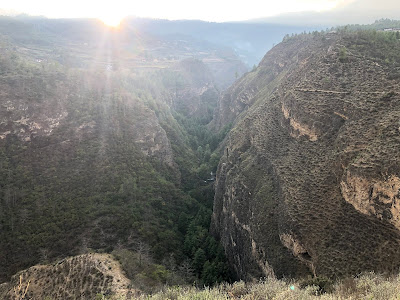 was made easily accessible by bringing next to the Dzong with the help of water pump. This holy water is known for its magical healing power. Many Bhutanese fetches this holy water and I saw so many people with vehicle collecting this water. 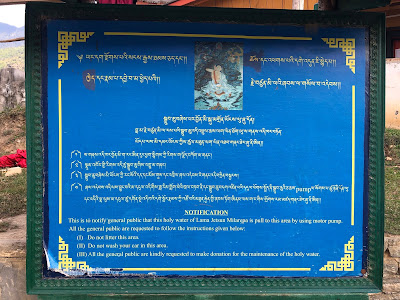 It is also said that Zhabdrung Ngawang Namgyal also visited and stayed one day one night on his way to Chapcha.

Entering the courtyard you will see a very sacred monastery at the edge of the cliff in the direction where the Dzong faces. 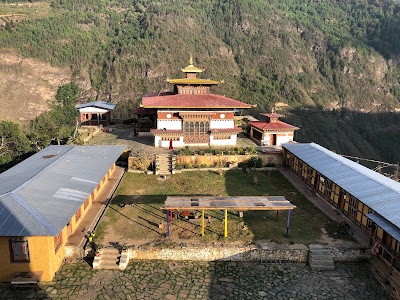 The main Nagten is a big Jetsun Milarapa’s statue that was placed at the top of the Altar, with similar size Lama Ngawang Chogyel’s statue housed below. The place name Dordey was derived from the event that happened with Jetsun Milarepa’s statue. Lama Ngawang Drukpa of Tshamdra Gonpa requested this statue from Lama Ngawang Chogyel to be placed at his monastery at Tshamdra Gonpa. On reaching this place (the exact location is near the three cypress trees) the statue did not move even an inch.The statue which was supposed to be carry by four people  was not able to carry by even eight people. 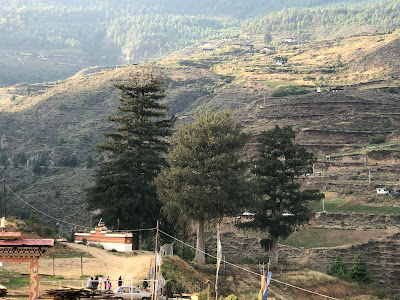 On making further plan to lift by all means, the statue made a statement saying that this site is his residence. It further suggested to make a painting of his image in replace of this statue at Tshamdra Gonpa. With much reverence the statue was placed as Nagten inside the Dzong. At Tshamdra there is a painting of Jetsun Milarapa made as suggested by this statue, that also mericulously spoked. The other Nagtens are Guru Thogam and the Gonkhang houses the Goem Chamda Sum.

The Guru Thogam  is like a treasure of the dzong.  According to Lam Ugyen Dorji during the time of Lang Dharma, the religious teaching had been deteriorated little. At the time of deterioration of a religious teaching started, Lang Dharma pulled out his own sword and said that if it is a sacred statue of Guru, must show the sign indicating that it is Guru and if it isn't, then should show a sign indicating it is wrong.

Then when Lang Dharma pull out his sword, his left ear was cut which signifies that he had put his sword on his own ear. Form there, Guru Thogamspoke then said that it need not be thrown in the water nor burn in the fire because all the religious objects were sacred and therefore, was kept in Tibet. After sometimes those who were able to justify said that Guru Nuidhen Dorjee as his share of sacred statue. Guru Nuidhen Dorjee sent his followers down in a sequence one by one. One of his disciples who was very talented in every field, Lama Ngawang Chhogyel was greatly related with the religion. At that time Guru Nuidhen Dorjee in sequence passed through their hand one by one and then reached to Lama Ngawang Chhogyel's hands.

The reason for Ngawang Chhogyel to keep a Guru Thogam statue at Dordey Dzong was that the religious bell was face to face from the up with a treasure of guru facing upward towards Phurdrub Gonpa Lumpa. A bell was facing downward and between this two (Guru and a bell) formed a village. Then the people say that the reason for having peace and comfort in the village is all because of that facts.

At the monastery I received blessing from Lama Ngawang Chogyal trulku Jeten Sangay Wangchuck who is at his 18-year old. There are around 12 monks performing kurims. 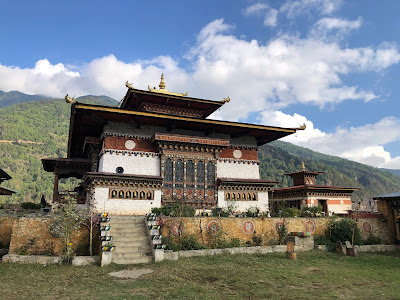 It is said that in earlier days, the government used to appoint Ponlop (governor) as head of the Dzong, but an earthquake destroyed the Dzong and the system of appointing Ponlop ceased thereafter. 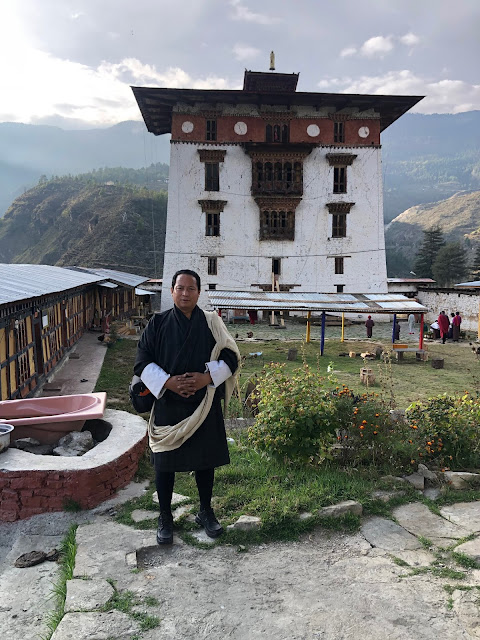 Today, only the central tower of the Dzong and traces of the surrounding walls remain. The tower is four-storied castle with many cracks signs. I have entered and reached up to the top floor climbing through series of steep ladders. 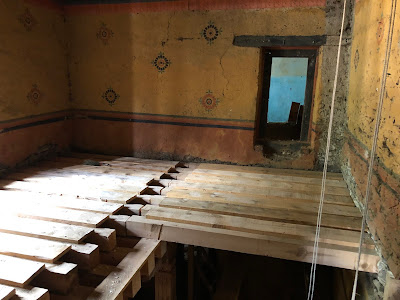 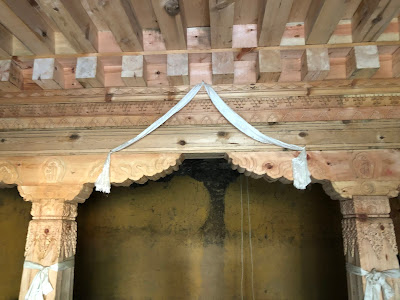 It is undergoing major renovation works under the sponsorship of Royal Grand mother Her Majesty Ashi Kesang Choden Wangchuck a project to convert into Jetsun Milarapa monastery. Nothing is seen inside except one room that was under lock and keys as its houses the Gongkhang. 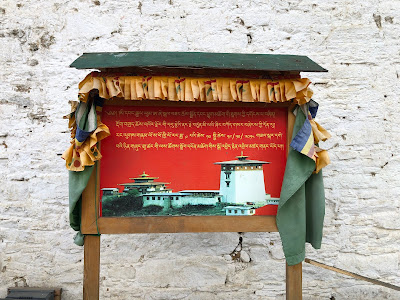 It was personally a great moment to the visit Dordey Dzong the name mistakenly called as Dobji Dzong. Please Visit and sink in the history.