Different types of Mala (ཕྲེང་བ་) and their applications 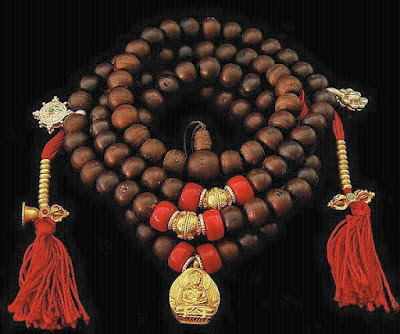 "It is very important to protect your mala from contamination by non-virtuous persons. Even a special mala of Bodhi seed or gold can cease to be of benefit to anyone. If it contacts the hands of a person who has committed any of the five heinous crimes, you will fail in whatever you try to accomplish."

Generally it is best to keep one's personal practice, including Yidam images, ritual implements associated with that practice such as a mala sadhana texts, etc. hidden from public view. One's personal practice is meant for gathering "power" and when one keeps it this way secret and hidden from the eyes and ears of other sentient beings, whereas if one displays it, the "power" easily dissipates like evaporating mist or boiling water in a pot without top. 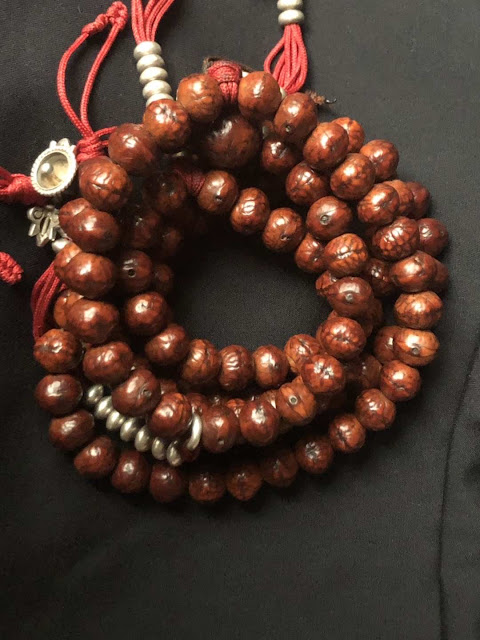 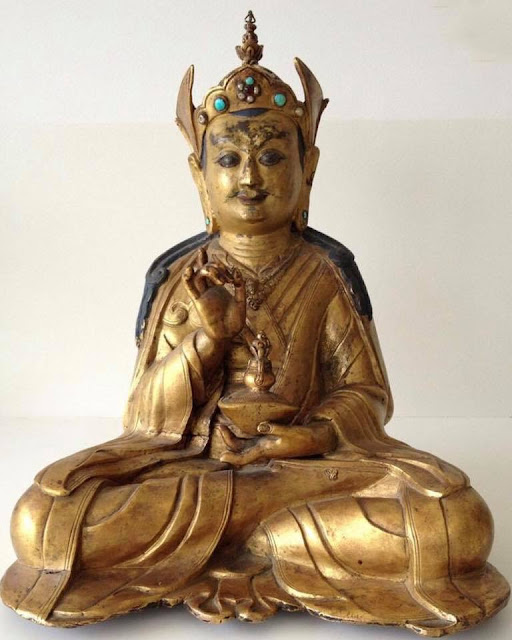 A mala made from seashells, earth, wood or seeds from trees or fruit is meant to be used to accomplish peaceful sadhanas and peaceful action. 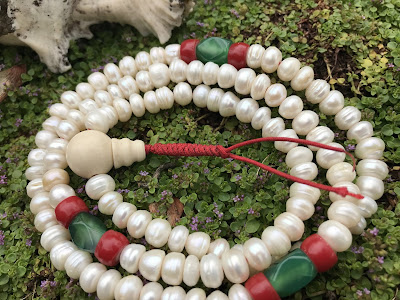 A mala made from gold will accomplish expansive karmas. 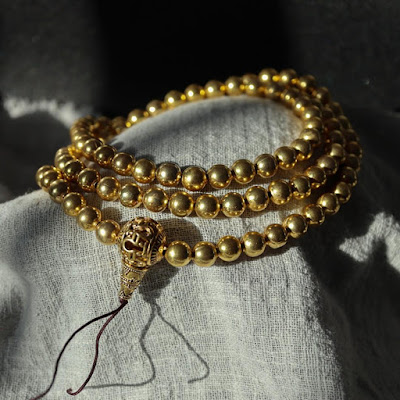 A red coral mala is best for accomplishing powerful sadhanas. A steel or turquoise mala is good for wrathful activity. 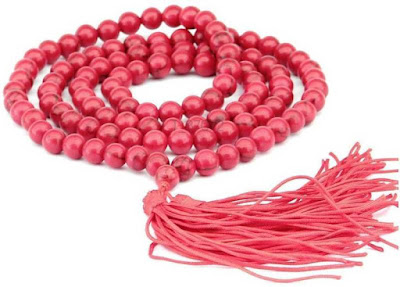 A mala made from dzi or other precious stones can be used to accomplish any of the karmic activities you are doing. 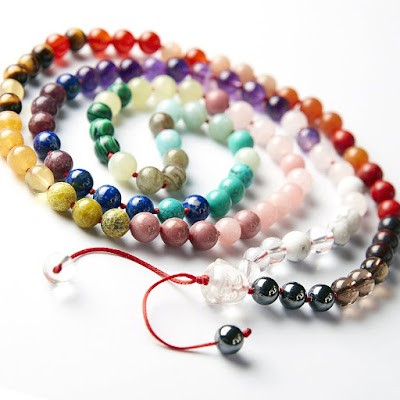 A mala made from apricot stones will accomplish expansive activity. 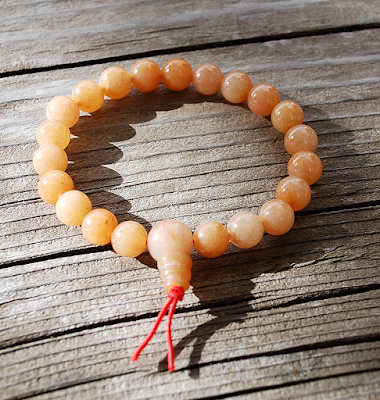 A mala made from “lot ton” (a tiny, round black seed within a fruit) accomplishes powerful activity. 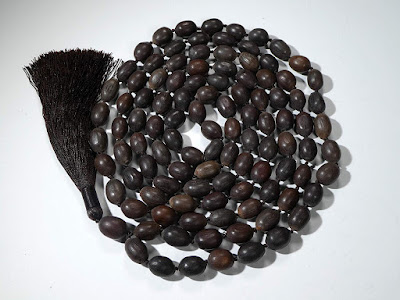 A mala made from raksha beads accomplishes wrathful practices. 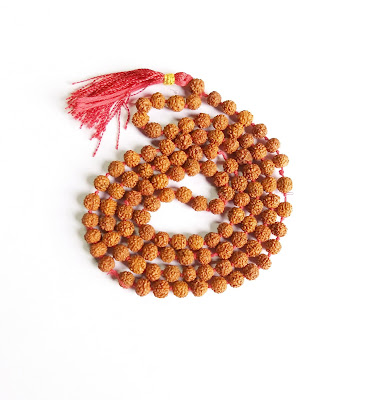 A mala made from bodhi seeds accomplishes all dharmas. 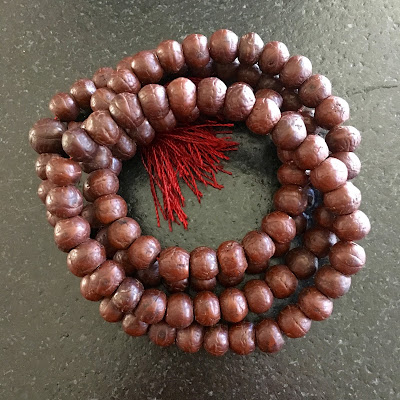 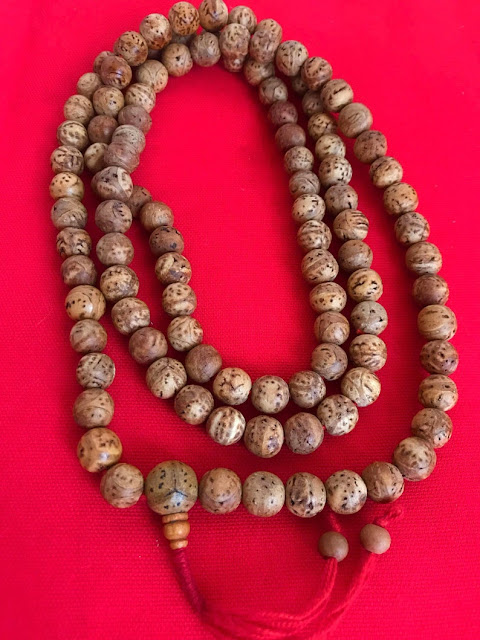 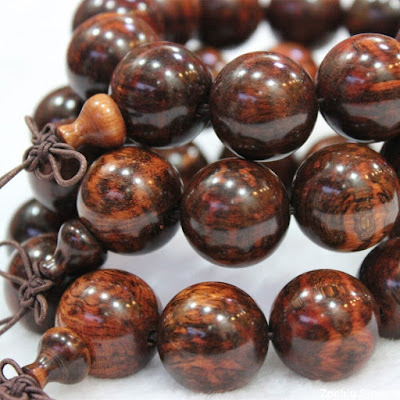 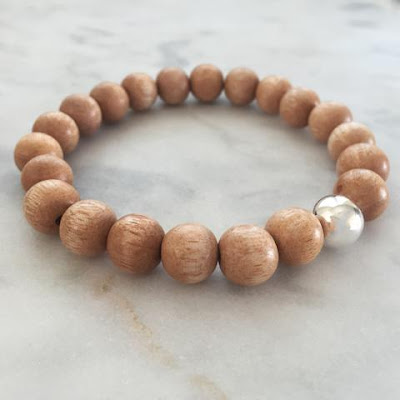 Malas made of ivory, especially from an elephant’s tusk, will accomplish all concerned activity. 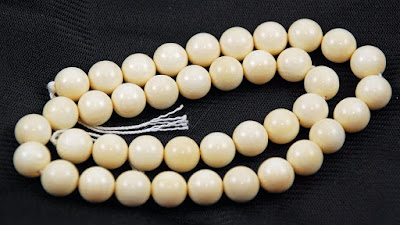 Beads made of stone are good for expansive practice.

Beads made of medicine are good for wrathful practice.

Malas with many different types of jewels are good for any practice.

Next, the text mentions the different kinds of benefits that are derived from using different types of malas. An iron or steel mala multiplies the virtue that is accumulated with each recitation in a general way. 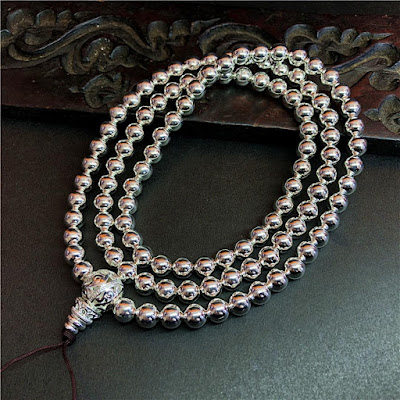 Your mala must be blessed by a lama, and you should constantly bless your mala yourself by imbuing it with energy. You must put energy into your mala before counting recitations with it, to pro duce real benefit.

You should clean your mouth and hand, and then your mala, before using it. You may also scent it with sandalwood oil.

Next, generate yourself as the deity, place the mala in your left hand and arrange the beads with the guru bead placed vertically in the center. Recite the mantra that transforms all dharmas into the awareness of their true nature: OM SWABAVA SHUDDO SARVA DHARMA SWABAVA SHUDDO HAM. This mantra cleanses and transforms impure perceptions into the awareness of emptiness.
And recite: ༀ་རུ་ཙི་ར་མ་ཎི་པྲ་ཝརྟ་ཡ་ཧཱུཾ། OṂ RUTSIRA MAṆI PRAWARTAYA HŪṂ   (7 times)

From emptiness, the guru bead appears as the central deity in the mandala, and the other beads appear as the members of the entourage. This part of the practice is the meditation upon the samayasattva. Next, invoke the jnanasattva. Invite the primordial wisdom beings to come forth, hooking them so that they dissolve into the samayasattva, just as you would in a sadhana. Invite the wisdom beings to come from their pure lands into the space in front of you. They then dissolve into your mala and remain firm there. Thus, every part of your mala is the entire mandala. 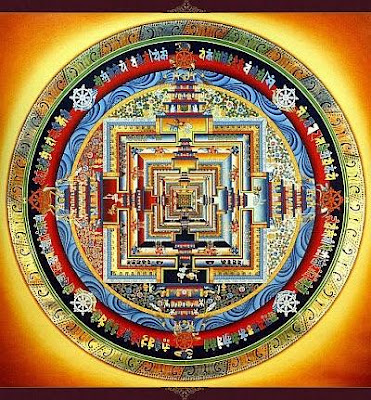 This includes the central deity, entourage, lotus seats, ornaments, hand emblems, colors, etc. Blessing your mala in this way multiplies each syllable of whatever mantra you then recite 100,000 times, besides causing good karmic results. Therefore, it is extremely important to do this.

Your mala represents not only the form of the deity but the speech of the deity as well. For example, if you recite the One-Hundred­ Syllable mantra, the guru bead represents the syllable OM and the other beads represent the remaining syllables. 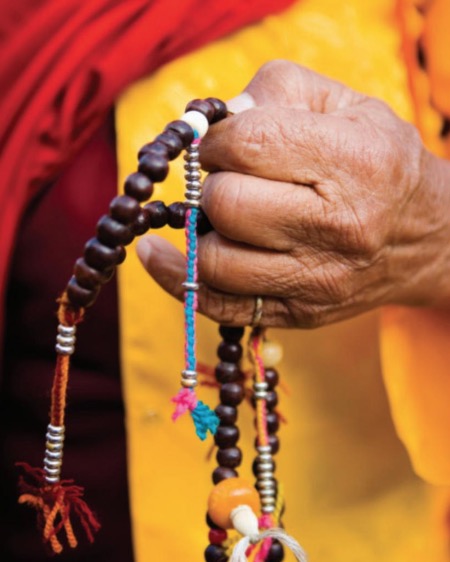 Guru Rinpoche said, “Whenever you recite peaceful mantras, use the tip of your thumb to count the mala. 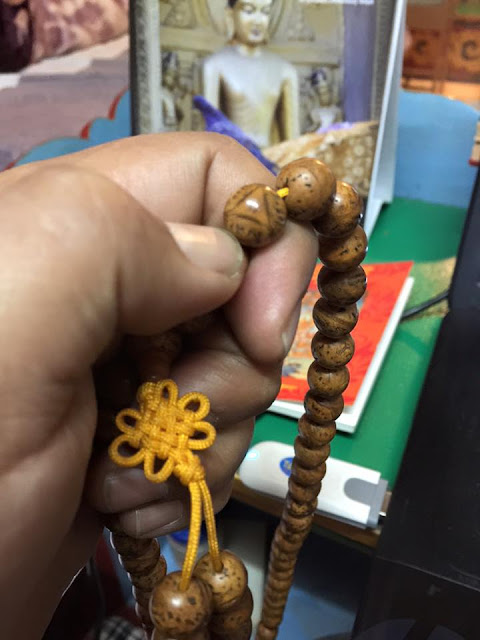 When reciting expansive mantras, use the third finger. 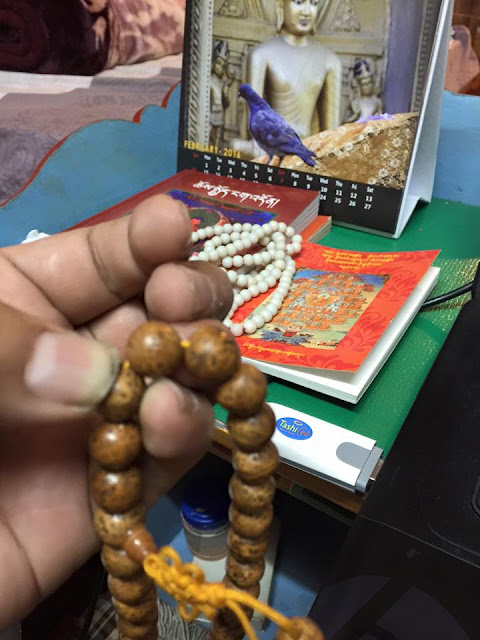 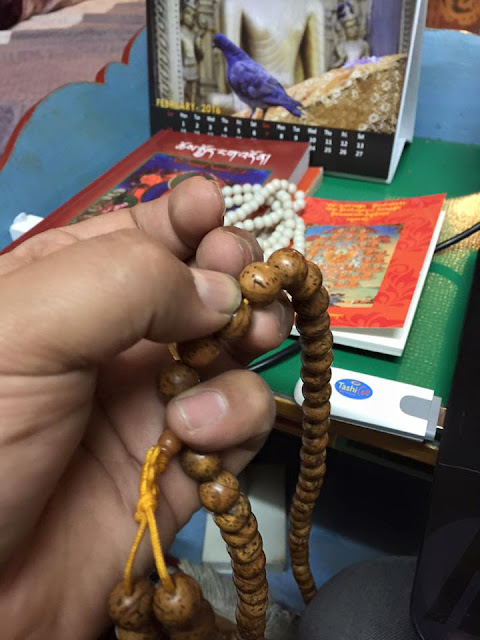 ” Use only your left hand to count mantras. The right hand is but rarely used; for instance, in some wrathful practices. Some books teach the use of both hands, but do not use the right hand only.

Whatever kind of practice you are doing, whether peaceful, wrathful, powerful or expansive, always be aware that the thumb is a vajra hook which hooks spiritual powers, deities and other blessings. It is also easy to move the beads with your thumb. 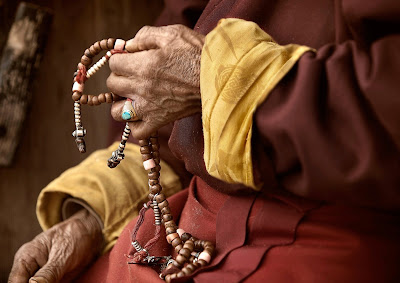 The text does not elaborate, but there are some extensive teachings on how to move the beads on the malas when performing certain practices. In some wrathful practices, you jerk the beads with both hands and so forth. You can also choose number of end beads for meditation. Remember to stay mindful of the following qualities while feeling the end beads between your finger and thumb. 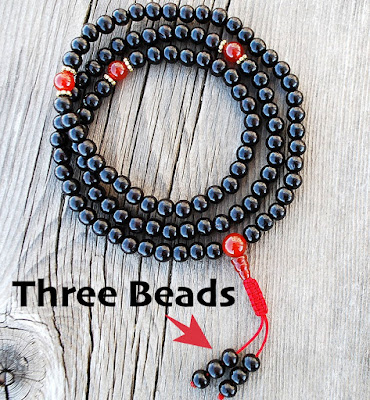 The 3 end beads are a reminder to connect to all that is good, truthful & positive and represent the 3Jewels in Buddhism:
1. The Buddha - the Enlightened One
2. The Dharma - the teachings, the truth
3. The Sangha - the Buddhist community 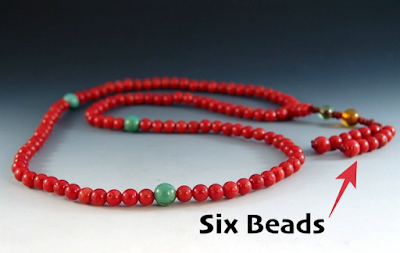 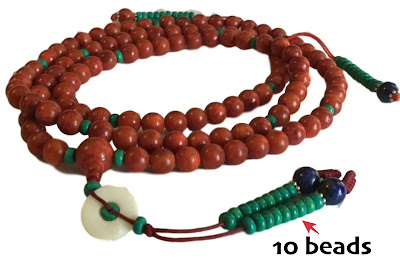 The meditation for these malas is based upon the Buddhist 10 non-virtues.
Staying mindful & avoiding these 10 non-virtues is the foundation of ethical living:
1. No killing
2. No stealing
3. No sexual misconduct
4. No lying
5. No slandering
6. No harsh words
7. No gossip or idle talk
8. No coveting or craving
9. No aversion or ill-will
10. No incorrect views

The following teachings, which explain how to care for your mala when you are not using it, come straight from the mouth of Guru Rinpoche.

If your mala has been repeatedly blessed by great lamas, by your own teacher and by yourself as part of your deity practice, it should accompany you like your shadow. You keep the root samaya of the vajra mala by never letting it leave your body.''

Thank you for reading.