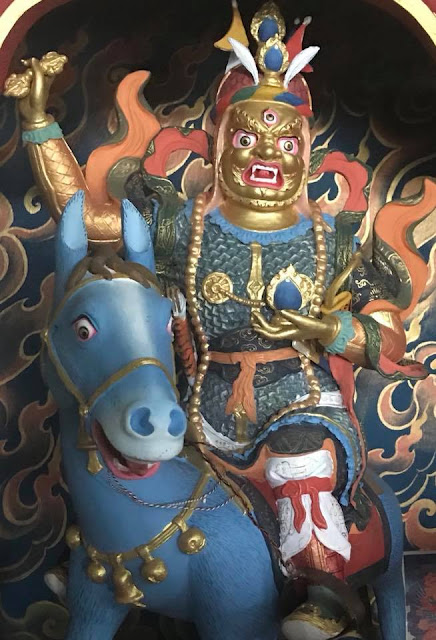 Today, I am very happy to come in face to face with Phola Mansang Chungdud Statue. I have heard many stories about this great deity who helped Zhabdrung Ngawang Namgyel to win war with Tibetans. He also invited Drupthop Trangtong Gyalpo to visit Bhutan. 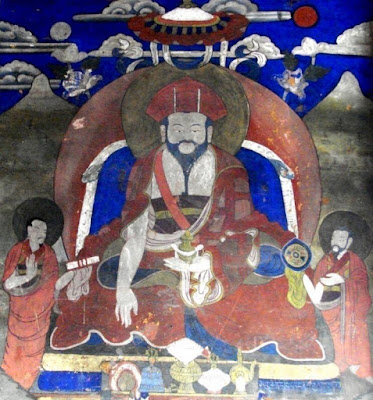 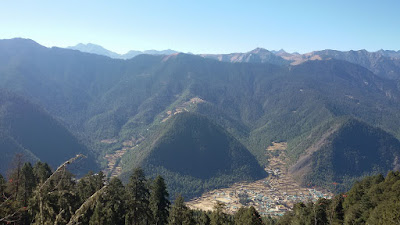 He is popularly known as Phola Mansang Chungdud or in short as Ap Chungdud. He is venerated for his strength, skills and bravery during the wars against Tibetans. He is also revered for his contribution in safeguarding the religion from negative forces. He is admired for his innocence and straightforwardness and dreaded for his temper. 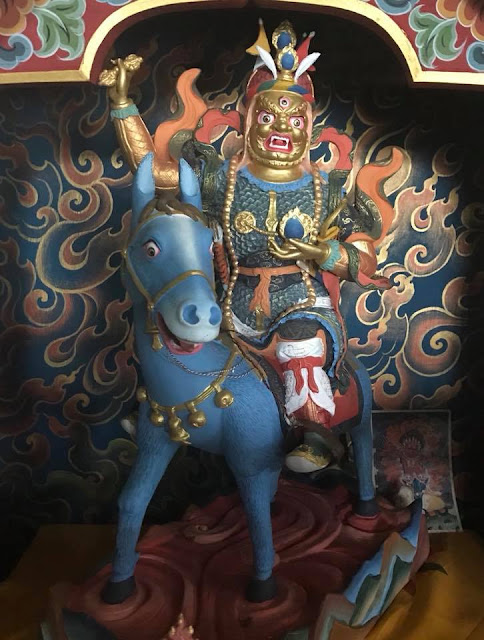 He is compared to a very good father who keeps the priorities of his children above everything else. People believe that it is not a good idea to come in conflict with the people of Haa not only because of the temper which they believe is being inherited from Phola Mansang Chungdud but also because Phola Mansang Chungdud backs them up if such an event ever occurs. Like many deities, he is known as “Welfare Deity” in common man’s language but sometimes devoid of logic and reasons.

When Guru Rinpoche came to this part of the world sometimes in 8th century, he performed many rituals to tame the malignant spirits. Out of these rituals, one was the 5th series of Avalokitesvara’s Abhisekha ritual at the cave of Gyonyulpel. 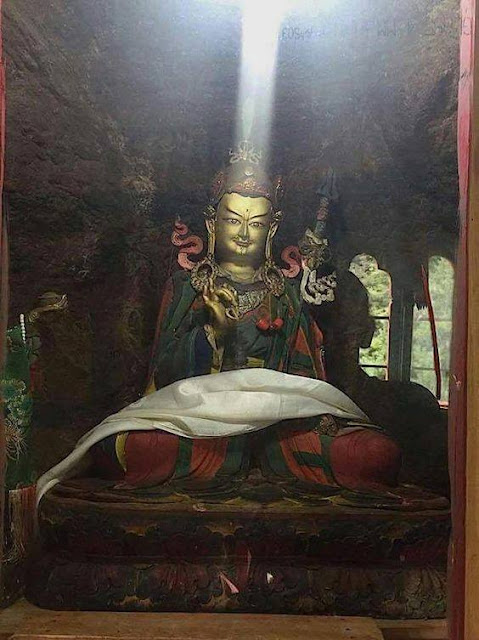 During this time, Phola Mansang Chungdud, along with many other deities who didn’t want Guru Rinpoche to come to Bhutan resisted by creating cyclones, forest fires, burning lakes, earthquakes, landslides, etc. Guru Rinpoche threw the golden Dorji (vajra) into the space and with its power knocked every deity unconscious on the ground. When they regained consciousness, they had learnt their lessons. So, they submitted themselves to Guru Rinpoche and vowed that they would never do such things in the future.
Among them was Phola Mansang Chungdud, who woke up to his consciousness in the form of small timid boy wearing a dress called vajratira and looked green with fear. He bowed down and requested Guru Rinpoche to forgive him for his malice. He also requested Guru Rinpoche to accept him as his disciple and pledged to dedicate himself in protecting the doctrine of Buddhism.
Guru Rinpoche was pleased with him and gladly accepted him as his subject and also blessed him. Guru gave him many Buddhist teachings and then appointed him as the guardian deity of Haa valley.

Phola Mansang Chungdud now had bigger and more challenging responsibility. However, many other smaller malignant spirits didn’t like the idea of Phola Mansang Chungdud becoming powerful. It is being said that one Dud who always appeared in the form of frog as big as yak always tormented people of Haa valley.
The people invoked Phola Mansang Chungdud and requested him to save them from this Dud. Phola Mansang Chungdud took on the task of helping the people. As the Dud appeared from the lake, Phola Mansang Chungdud’s horse leapt on the back of the Dud and subdued him and turned him into a rock.
This rock with a face of the frog and the hoof imprint of Phola Mansang Chungdud’s horse still exist today at Haa just near the Ugyen Dorji Higher Secondary School. Ever since then, people started offering their gratitude every year by conducting rituals.
Another offering ceremony happens on 15th of the 11th month every year. Numerous pawo, nejom and patrons gather together, in a spectacular scene, to observe rites under a particular pine tree (lhaydong) at the palace of Chundud in Haa Jangkhakha.
There were attempts to stop the yak sacrifice by substituting it by other offerings since yak sacrifice defeated the Buddist idealogy of not to kill any sentient beings.
However, the idea didn’t take off because of the belief that Zhabdrung Ngawang Namgyel had given him as a gift after the Tibetans armies were crushed at battle in Jangkhangkha. Taking Phola Mansang Chungdud’s ancient root as dud, Zhabdrung had made exceptions to the rule of killings and had allowed yak sacrifice once a year since he was impressed by the valor of Phola Mansang Chungdud as warrior.
He is known to have made his intentions very clear through his oracle medium, which is known as Phola Mansang Chungdud’s Powo when the yak sacrifice was nearly stopped. Locals also believed that since the Zhabdrung has granted him a gift, it should not be stopped. Stopping the sacrifice might invite his wrath.
Sometimes in 15th century, a Terton called Sherab Mebar happened to reach Haa from Kham in Tibet. He drank all the waters of the lake Nubtshonapatra and took out dung (trumpet), Nga (drum) and a pair of ramung (cymbals) from the lake bed. He also found a huge golden pillar and requested a carpenter to curve it into a pillar to be used for Paro Rinpung .The carpenter was told to take the shavings from the pillar as remuneration for the work. However, the carpenter shaved too much from the pillar as his remunerations. As a result, the lake escaped from the mouth of the Terton and started chasing him.
Terton ran for his life. While running away, he threw first the drum and then the drumsticks. He also threw away the trumpet and a one portion of the cymbals until Phola Mansang Chungdud appeared to rescue the Terton at a place called Labdza of Tshellutsho. Phola Mansang Chungdud negotiated the truce between the Terton and the angry deity of the lake. It was agreed that the Terton, his followers and his people would never set their foot in Haa Shongana. Similarly, the deity of the lake agreed not to cross Labdza.
This cut out all links between the people of Haa Shongana and Paro Pangmisa where Labdza is located although the two places are known to be nearby. The other portion of the cymbal still exists today and is one of the main treasures of the Paro Rinpung Dzong. Once a year it is taken out of the Dzong during annual Paro Tshechu for public to get blessing.

This agreement was however, defied later by a young man from Haa Shongana who happened to marry a girl from Paro Pangmisa. It is being said that , while they were travelling to Haa Shongana, the couple lost their infant child when they were crossing a footbridge. The knot tying the baby wrapper is known to have loosened itself when they reached the middle of the bridge and the river beneath carried the child away. So the people started taking him very seriously, not to invite his wrath.
One of the popular stories that are being told and retold among the people of Haa is the story of war between the deity of Paro, Jowo Drake and Ap Chungdud concerning the water resources. The water resources were to be shared between Paro and Haa and as such, the deity ‘Od Dedpa is believed to have called Phola Mansang Chungdud and Jowo Drake. They were told upon arrival to come to the source of the water early in the morning since the water would be let out early the next morning before sunrise. Jowo Drake who was very clever and cunning and also knew Phola Mansang Chungdud’s weakness for local brews fed Phola Mansang Chungdud the local brew whole night so that Phola Mansang Chungdud could not wake up in the morning when the water was let out. When he woke up, he found that all the water had been diverted to Paro and nothing had been left for Haa. Phola Mansang Chungdud got so infuriated that he waged war against Jowo Drake. 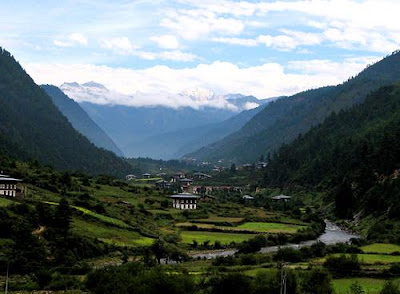 This war became so violent that people on both sides started to suffer. Therefore, the deity ‘Od Dedpa mediated a truce between the two deities. He asked Jowo Drake to compensate Phola Mansang Chungdud by making the offering every year with the fresh harvest.
According to the terms of the arguments, the first grains of rice after each harvest was to reach Ap Chungdud as offering and this tradition is carried out till date. Every year, people of Paro come with offerings of fresh harvest for Phola Mansang Chungdud at Haa.
Stories are also being told of Phola Mansang Chungdud having affairs with many women. One such story relates with a woman of Paro. It is being said that Phola Mansang Chungdud used to travel to Paro and other bordering areas with a huge caravan of horses. He is also known to have traveled to Sikkim where he is considered the deity of Sikkim. During such travel, he had an affair with a girl from Paro who soon became pregnant. However, Phola Mansang Chungdud had asked the lady not to reveal him as the father of the child at all cost to other people for some reasons.
Over the time, the parents of the girl started to question the father of the child. When she refused to disclose the identity, the girl’s father started beating her until she disclosed.
When Phola Mansang Chungdud knew about his identity being disclosed, he became so angry and wrathful that the girl’s family died of fear.
The house is believed to exist till date but that no one is known to live there.
Phola Mansang Chungdud also fathered many other children. One of his children was called Penlop Haap who is known to have been gifted with many treasures, weapons and wealth.
A story is being said of Penlop Haap wearing beautiful and expensive ghos in seven layers when other people could barely afford to wear one such gho in their lifetime. Each layer was more beautiful and expensive than the other. Within each layer were hidden knives- and each was more beautiful than the other and Penlop Haap is known to have showed each one of them to Zhabdrung during their casual meetings.
During a fight, which ensued with one person during one of the festivals, Penlop Haap had refused to use his knife as everybody had expected. Instead people heard a sound of gunfire and his enemy had fallen on the ground. Some people speculated on the kind of weapon he used while many wondered what would have been his weapon since none had seen a gun before.
Most people today believe that Penlop Haap must be the first person to have used gun in Bhutan and that it was gifted by Phola Mansang Chungdud.
Phola Mansang Chungdud is known to have been very generous with the people. He also served many important lamas including Thangthong Gyelpo. Phola Mansang Chungdud had gone all the way to Phari in Tibet and had requested Thangthong Gyelpo to come to Bhutan and teach Buddhism. He followed Thangthong Gyelpo and served him wherever he went. Thangthong Gyelpo who is also known as Chagzampa for having built many iron bridges is believed to have taught Phola Mansang Chungdud the art of making weapons out of the iron ores.
I Pray for his continuous protection.