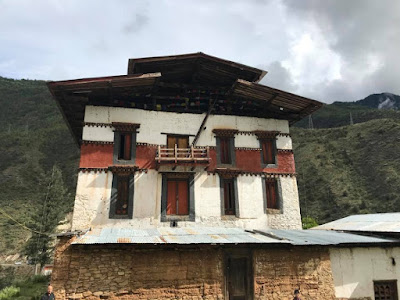 Tachogang Monastery is located along Paro-Thimphu highway, just after Isuna village and before Chhuzom, on the base of a barren mountain across the Pa chu river. This monastery is the only structure on that ridge that is vividly visible and is of great beauty with olden Iron Bridge over the Pachu River below. 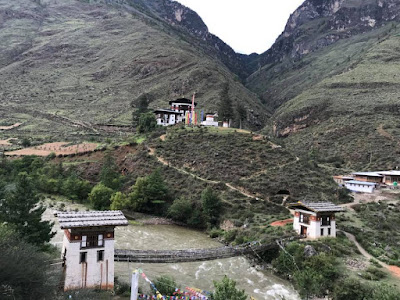 I along with my brothers visited the Tachogang Lhakhang. Our first plan was to cross the bridge that was made using the original iron chain made by Drupthop Thangtong Gyalpo. Unfortunately the bridge door was locked, as the suspension bridge was not safe to use. Later we learnt from Monastery caretaker that some miscreants have stolen 5 pieces of Iron chain from the chain-link making the sacred bridge unsafe to cross. 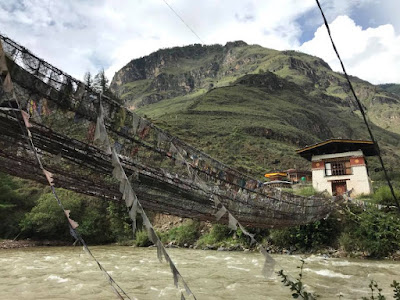 We used another suspension bridge located below and enjoyed an occasional swing during our movement over it. 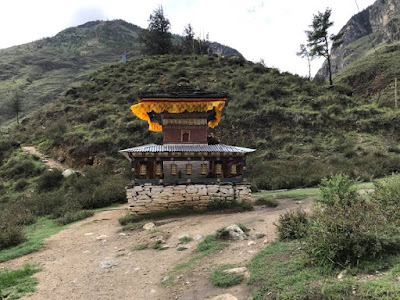 Passing a typical chorten (Stupa) after making few rounds, we spotted a meditation cave curved inside the mud slope that was filled with Tsa Tsa. Did some photograph out of curiosity for my long remembrance! 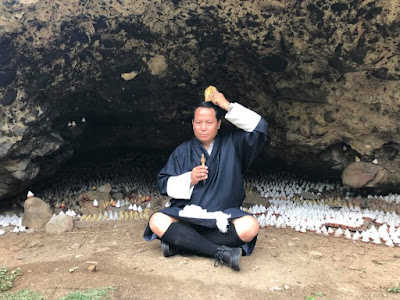 Walking up for around 5 minutes we reached near the monastery that I longed to visit long time back but never materialized. 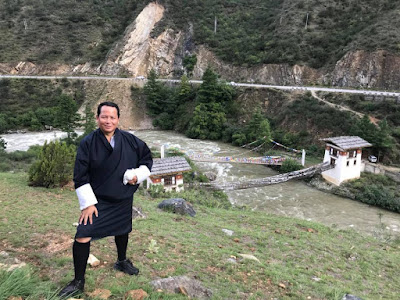 Wow! The scene from that location was very beautiful and the place looks like heaven. 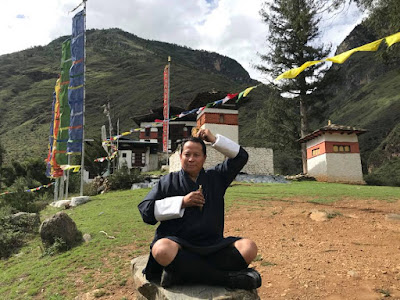 The only thing that bothers you the most was the strong wind that has no sign of calming. Two dogs barked furiously nevertheless it surely welcomed us. Well it also conveys a message to the caretaker the arrival of visitors apart from protecting the monastery in the night. 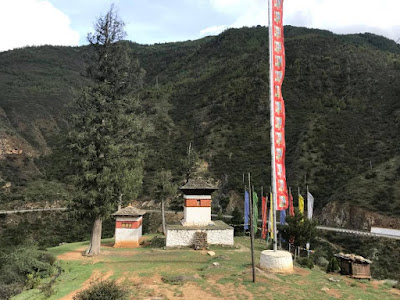 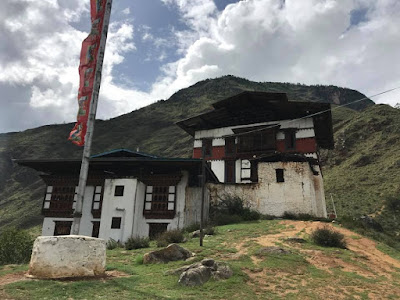 On the First floor is the Gongkhang which houses Za Rahula (Planetary deities), Chadru, Ngarsum and Mazadumsum. Nothing can be seen here as it is curtained from public display. Only a hornbill head is seen put on top of the wooden altar.

On the second floor we saw the statue of Chenrigzi (Avaloketesvara), Drupthop Thangtong Gyalpo, Zhabdrung Ngawang Namgyel, Thugse Dewa Zangpo, Lam Jamphel Loday and Chana Dorji (Vajrapani). Beside in a wood showcase we saw Drupthob Thangtong Gyalpo’s iron chain links (around 6 pieces). Inside walking sticks of Thangtong Gyalpo and Lam Jampel Lodey were also kept. We offered butter lamp and made prostration to the great relics. 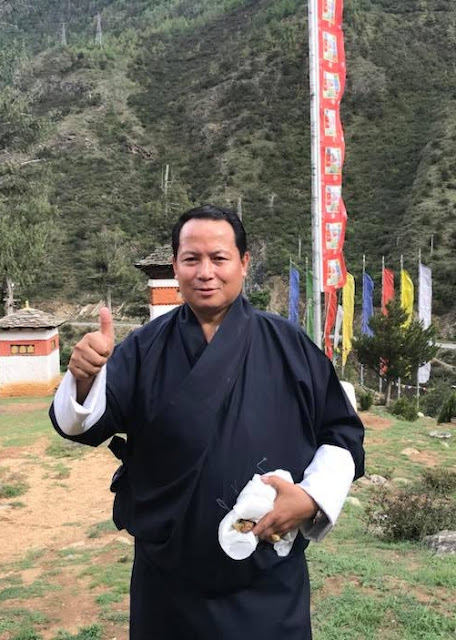 How did Tachogang Lhakhang establish in such a barren and isolated area? 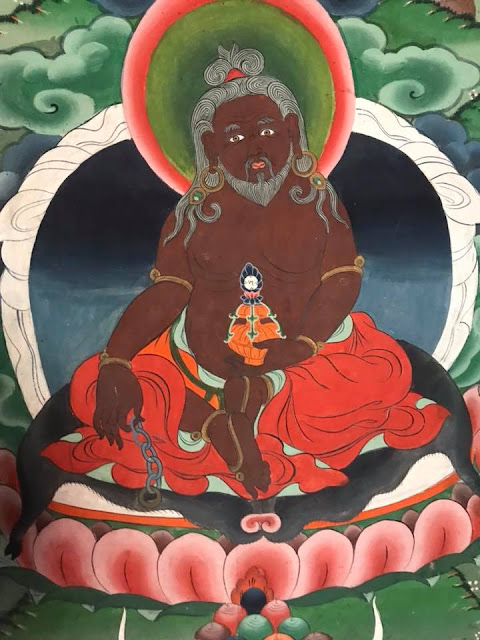 In the 14th century Dupthob Thangthong Gyalpo came to Bhutan at the invitation of the deities Ap Chundu and Jowo darkey of the Haa and Paro valleys respectively. Upon arriving at the area where he has been summoned, Thangthong Gyalpo sought solitude and began his meditation, for seven days.
During the course of his meditation he experienced visions of the spiritual horse Balaha an emanation of Avalokiteshvara, which inevitably inspired him to build a lhakhang and bestow upon it the name of Tachogang lhakhang. Tachogang means ‘temple of the hill of the excellent horse’. 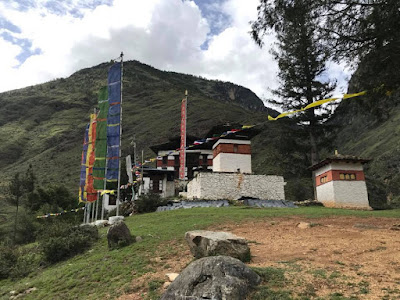 On completion of meditation Thangtong Gyalpo emerged to reunite with the outside world; and his first social embrace was that of a woman who seemed to possess special signs, as Thangthong Gyalpo simply gave her three pills and blessed the woman before his departure. Soon after this event, the lady gave birth to a son, Dewa Zangpo, the heart son of Thangtong Gyalpo.

Thangtong Gyalpo never build the temple with his own hands but with a simple gesture and gift to an extraordinary woman, he assured the temple’s construction, as Dewa Zangpo (who would become one of the seven disciple of Thangtong Gyalpo) was indeed the man who constructed the Tachogang Monastery.
Dewa Zangpo was not simply an important architect he also established the linage of Tachok Chojie, the descendants of which live close by the temple and I have met the old woman. 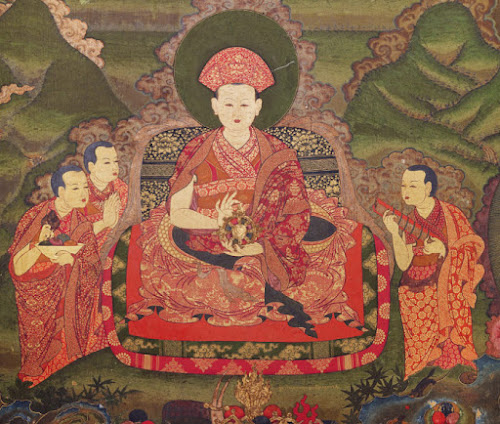 The Fourth D ruk Desi Tendzin Rabgye built a new temple at Tachogang in the seventeenth century, as the original was destroyed after it served as the main seat for the Five Groups of Lamas, a coalition of local leaders who had opposed the Zhabdrung Ngawang Namgyel. Currently, the descendants of Tachok Chojie families privately look after Tachogang Lhakhang.
Drupthop Thangtong Gyalpo had also built an iron bridge for the people to easily reach the temple. The flood washed the former iron bridge away in 1969.
The legend of Drupthop Thangtong Gyalpo says that the money needed to build his iron bridges was raised from his opera (Show)  performances. The present bridge was restored in 2005 as per the wish of His Majesty King Jigme Singye Wangchuck. Even the reconstructed bridge has some of the secured chains of Tachogang itself and four chains are brought from Doksum and Tashigang. 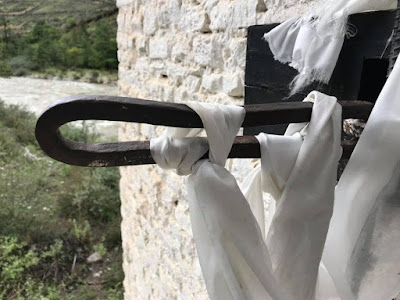 Daily many people do stop and visit the iron chain bridge with few making to the monastery. 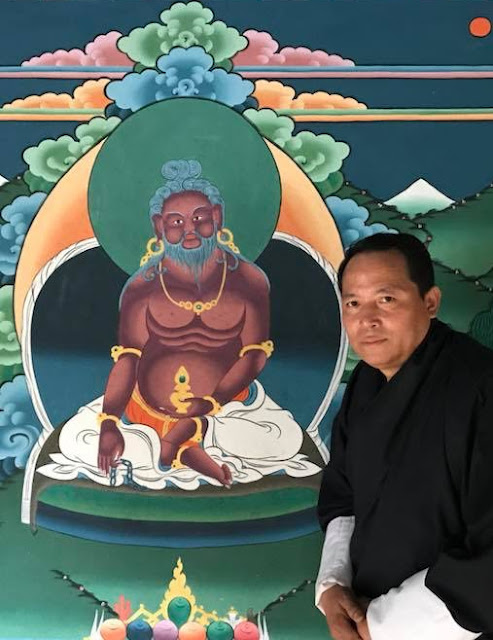