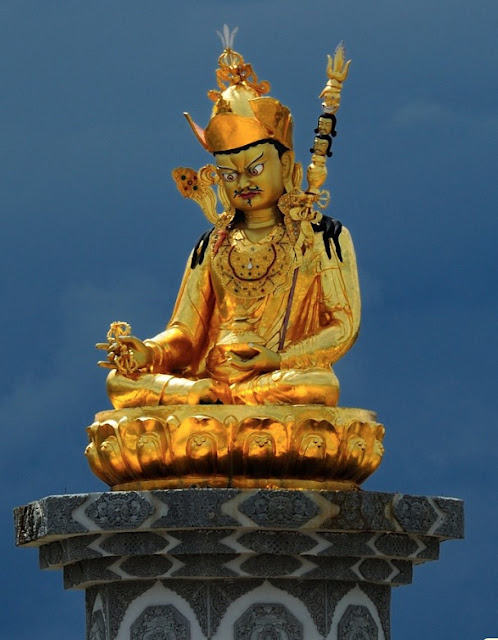 On the tenth day of the fourth month, the horse month, when the demonic ministers of Oḍḍiyāna seek to burn him and his consort alive, he transforms the pyre onto a lake, miraculously shimmering in majesty, appearing on a lotus blossom, and inspiring faith in them all, and when he ripens and liberates the entire kingdom through the Kadü Chökyi Gyatso teachings, he is known as Guru Padma Vajra Tsal.

Kadü Chökyi Gyatso  ‘The Ocean of Dharma, the Great Gathering of Transmitted Precepts’ of Guru Rinpoche was a treasure of Yarje Orgyen Lingpa, who took it from a cliff at Yarlung Shedrak. It was later rediscovered as a yang ter by Jamyang Khyentse Wangpo (1820-92).
In the fourth month you will be immune to harm from Earth-lords, Nāgas and Nyens. If you pray to Guru Rinpoche, the Dharmapālas and Guardians will accomplish whatever activity you entrust to them. No harms from earth-lords, Nagas and Nyens can also inflict to you.

If you have little time please go through the part of Guru Rinpoche’s biography related to tomorrow’s day. 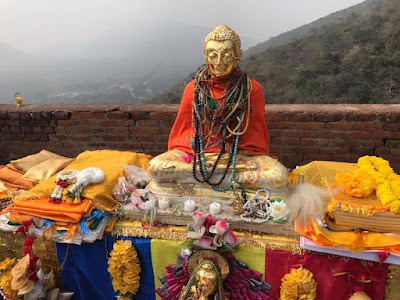 Guru Padmasambhava was meditating on Vulture Peak, the place where Buddha Shakyamuni had delivered the Prajnaparamita teachings. Upon internally inquiring where he might be able to offer the most help to all beings, he had a vision of Zahor, a country northwest of Bodhgaya. He also saw a wisdom dakini in his vision. This was Mandarava, a perfectly enlightened being who happened to be the daughter of the king. Guru Padmasambhava realized that with her assistance, they could both achieve immortality or realize the state of deathlessness. For these two reasons he immediately manifested in the country of Zahor. 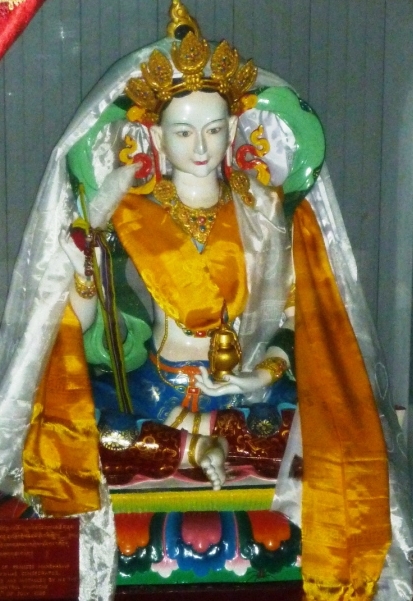 King Arsadhara of Zahor was quite wealthy and powerful at that time. Although he had many queens, he had no sons and Mandarava was his only daughter.
Mandarava is a Sanskrit word, and the name of a type of flower which translates roughly into English as "to catch the mind" of others. During both her conception and birth there were many auspicious signs and omens indicating that this would be a remarkable child. After the little princess was born, she displayed all the major and minor marks of a realized being. Mandarava grew much faster than other children. It is said that she accomplished a year's growth in a week, quickly maturing into one of the most kind-hearted and beautiful girls in that whole region. Everybody loved and protected her. The young princess was popular throughout the kingdom.

In those days, marriages were usually pre-arranged by the families. Even today it is like this in many parts of India and Asia. Because she was so beautiful and well- known, there were many kings, ministers and rich people asking to marry Princess Mandarava. This worried the king because he thought, "If I had hundreds of Mandaravas, I could make friends and relations of them all, but unfortunately I only have one Mandarava. If I give her to one, all the others will be angry. Her husband might be happy, but everybody else will be upset." He fell into a dilemma and felt very confused as to a solution.

Finally, he decided to leave it up to Mandarava so that he could say it was her choice. When asked, the Princess said she didn't want any of her suitors; she just wanted to practice and meditate. She had made a decision and King Arsadhara was respectful of her choice. He had a beautiful convent built and arranged for five hundred girls to accompany Princess Mandarava in her quest for a spiritual life. They all lived like nuns in hermitage.


One day during an outdoor practice, a magnificent rainbow appeared high in the sky above the nunnery. In the center of this brilliant rainbow light, Guru Padmasambhava appeared. As soon as he began to speak, all the nuns felt a strong, intimate connection with him. They asked him to come down and give more extensive teachings. So he descended into the courtyard and was invited into the meditation hall where he began to instruct them in the practices of the inner tantras.

Now a cowherd was in search of a cow by the hermitage. He couldn't find the cow, but while he was looking around, he thought he saw a man being invited into the convent. Thinking that perhaps his eyes had deceived him, he quietly approached the wall and heard what was unmistakably a man's voice coming from inside the convent. So he went down to the village to tell everybody. Well, people were quite upset. They didn't like the idea of the nuns having a man in their midst. If they wanted to study the Dharma and give up household life, why did they invite this man in? And what was his intention in being there? A few people decided to investigate for themselves and concluded that there was definitely a man in the royal convent. This was very shocking news and folks were not prepared to accept such a state of affairs. Rumors multiplied throughout the villages and by the time word got to the palace, it had become an incredible scandal. King Arsadhara was extremely angry. 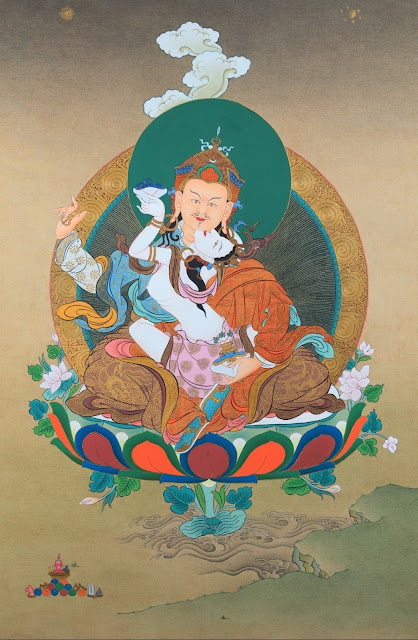 Even the queen mother was insulted. Emotionally, it was as if a volcano had erupted in the royal chambers. A group of ministers and soldiers were dispatched to check out the truth of the allegations, and if they were true, to kill the offender and to punish everyone else involved.
When the king's delegation arrived at the convent's meditation hall, Guru Padmasambhava was expounding the Dharma while sitting on a throne surrounded by all 500 nuns. Everybody was very calm and peaceful. It looked like they were having a good time. When the king's men began to get aggressive, the nuns drew closer around Guru Rinpoche and Mandarava. The Princess pleaded with them. "Please don't do this. This is our beloved teacher. He is helping guide us to enlightenment. Tell that to my father. There is nothing else going on here besides Dharma teachings." The men ignored her and Guru Padmasambhava was captured. His hands were bound and they led him off surrounded by hordes of people. They wanted to make sure that he did not try to run away. By royal decree, his punishment was to be burned at the stake. Mandarava was sentenced to prison for 25 years, while all 500 of her attendants were sentenced to ten years. All of this was the king's decision. A great quantity of wood was collected from the local households and soaked with sesame oil.

Guru Rinpoche was tied in the center and the pyre was lit. The king ordered that no one be allowed into the area for a week except those who were tending the fire.
Now while Guru Rinpoche was in the midst of the flames, the fire transformed into water, which soon became a lake encircled on its outer perimeter by a ditch sporting a halo of upside-down flames. In the center of this beautiful lake there was a wondrous lotus flower and above that, Guru Padmasambhava was sitting in the posture of royal ease, even more glorious than before. The guards who were watching couldn't believe what was happening but they attempted to describe it in a message to the king. The king didn't believe it either and wanted it reconfirmed. The guards stuck by their story, so he decided to come see for himself. 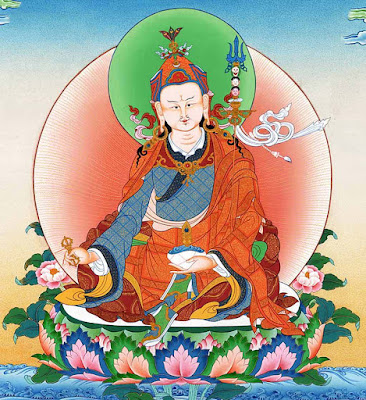 King Arsadhara cautiously approached the miraculous lake. At first, he thought it was just a magical illusion, so he walked around the outer ditch, trying to detect whether it was real or not. He blinked and gazed hard, he rubbed his eyes and opened them wide as if there was something wrong with his vision, but every time he turned to look, he beheld the same incredible scene with Guru Padmasambhava gloriously sitting in the center of a beautiful lotus flower, looking more confident than ever. While the king was busy making his investigation, Guru Padmasambhava called out,

"Welcome, oh ignorant king. You have such a narrow mind! Your judgements are insane! You cannot do anything to me. Having realized the great equanimity, my nature is like that of the sky which cannot be burned or destroyed. Oh deceitful and obscured one, how did you ever come to be king?" Upon hearing this the King immediately felt very sorry about what he had done. He fell on the ground and began doing prostrations saying, "Master, please forgive me, I am sorry for all my ignorant actions. I offer you my kingdom. Please come to the palace." Guru Padmasambhava answered "I don't need a kingdom or a palace." So the king requested teachings and Guru Padmasambhava accepted his invitation. 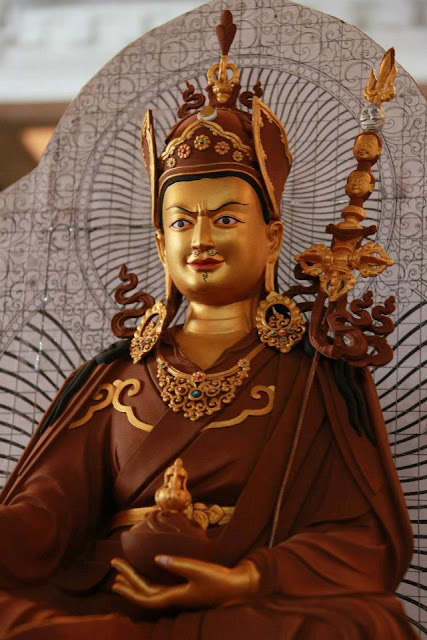 The king wanted to escort Guru Rinpoche in royal style, as he would welcome another great monarch. He sent ministers back to the palace to retrieve the royal vestments and presented Guru Padmasambhava with ceremonial robes. In place of horses, King Arsadhara himself pulled the Guru's chariot into Zahor.
Historically, Guru Padmasambhava's famous five-sided hat was a gift from the King of Zahor. It was the King's own coronation hat and was offered to Guru Rinpoche as a symbol of respect. I don't know if he was wearing it when he came to Tibet or whether it was just one of his favorites, but this five sided hat has become an auspicious symbol. 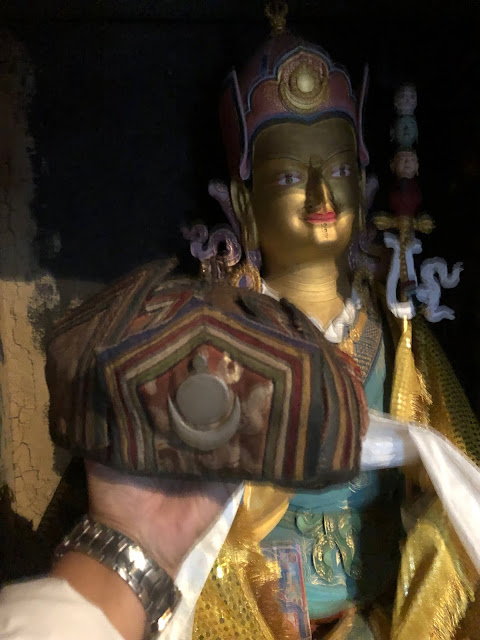 Mandarava and her 500 attendants were released from prison and Guru Padmasambhava stayed in Zahor for a long time giving Vajrayana teachings, specifically focusing on the combined instruction of all the inner tantras. 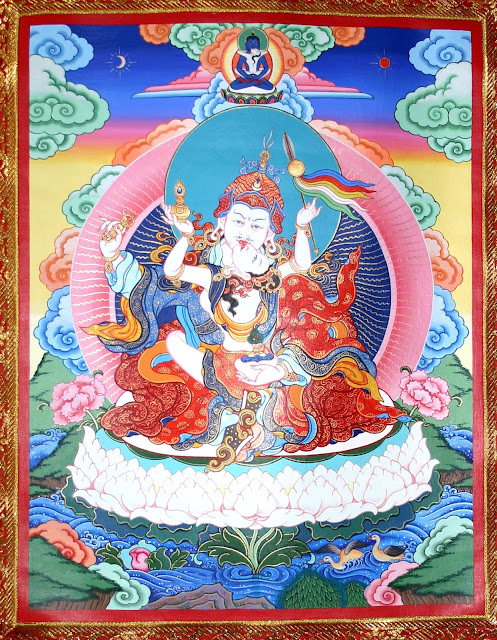 As a result, it is said that about 100.000 people, both men and women, reached the vidyadhara state. This is considered a very high realization on the Vajrayana path and Arsadhara, the king of Zahor, was among the fortunate ones.

Extracted Biography Courtesy:
THE EIGHT MANIFESTATIONS OF GURU PADMASAMBHAV A