Practices for others while dying and after death

Practices for others while they are dying 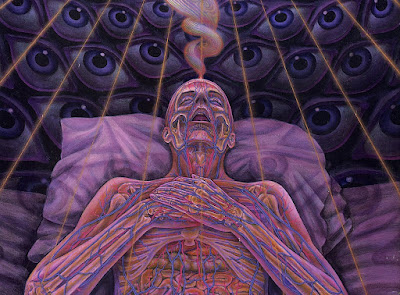 Buddhist Practitioners in the Dissolution Stages

The outer dissolution stages can be dramatic and disorienting, especially if one hasn’t studied them and is unprepared. If you recognize that the person you are attending is passing through these stages, be as encouraging as possible, informing them that their consciousness is passing up through the central channel (uma), lightly touching the hair at the crown of the head, drawing attention to the crown chakra at the top of the central channel, bringing an “energy up” orientation to them. This is also a time when you can do phowa for them.

Phowa
The “Hook of Compassion Phowa” is done for others who are dying or who have already died. It is particularly effective to do this practice in a group. Before you begin, be sure to get some confirmation that the person is dying, either from a doctor or from recognizing the signs of death (such as the appearance and behavior of the person, including the outer dissolutions). 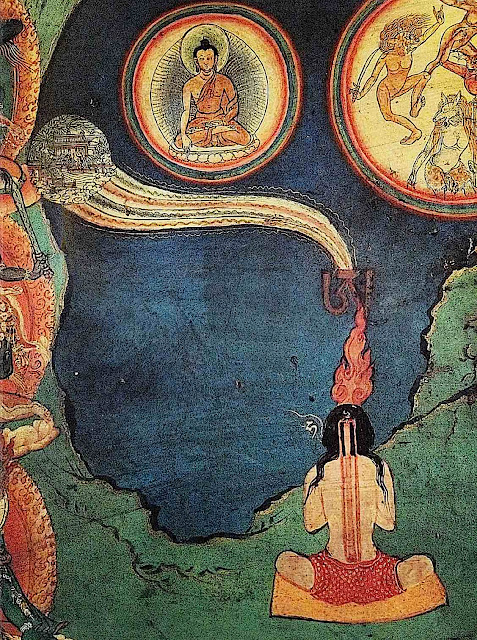 Hook of Compassion Phowa is based on the Nirmanakaya Phowa you practice on yourself. The same visualization is used except that you visualize the person dying and yourself simultaneously: You simultaneously raise and eject the red syllable Hri–yours and that of the dying person–and both merge with Amitabha overhead. There is no need to do the Amitayus visualization and prayer afterwards. Of course compassion and loving kindness towards the dying person is essential. (You need to have received empowerment and to have some familiarity with the practice for it to be effective.)
Signs that the practice has succeeded include steam rising from the head of the deceased, hair falling out at the crown of the head, and the appearance of red and white fluid at the nostrils (called bodhicitta nectars).

Sudden Death
If a person dies suddenly, but no one becomes aware that the person has died until some time later, (as, for instance, in the case that a person living alone dies during the night), if it can be determined that their death occurred less than 24 hours ago, one can do phowa for them at that time. But after that time period has passed, it is best to do Shitro, Vajrasattva, or some other practice.

Dutsi Pills
Dutsi pills are sacred substances in the form of pills that have been blessed and consecrated by millions of mantras and prayers. When a person takes dutsi at the time of death, it has the energy and blessing to help transform the mind and energy into peace and joy. It also is very comforting on the energetic level and clears the inner mind to recognize one’s right path in the bardo states.
This dutsi-amrita/kyedun pills–“seven rebirth pills” are very important to have nearby all the time because you don’t know where and when you are going to die. The meaning of “seven rebirth pills” means after seven rebirths you’ll be liberated into an enlightened state of mind to bring greater benefit to beings. It’s very powerful and healing medicine.
The dying person should take these pills while they are still alert, or someone who is with the dying person should give them the dutsi right before and during dying. You can take this substance mixed with water or juice or by itself, but it’s important not to mix it with meat. If the dying person cannot drink, the dutsi mixed in water or juice can be put in the mouth, such as with a cotton swab. Normally it is not used after death.
If this dutsi is with you anytime, wherever you go, it’s a very good idea, not only for yourself, but also if you see some animals dying or other people dying, you can offer it to them at that right moment. It can also be placed in your Dharma Box where others can find it at the time of your dying.

Practices for others after death

Prayers are important throughout the 49 days the deceased is in the bardo. It is especially good to do them on the same day the person died, for the whole seven weeks. (If the person died on a Wednesday, for example, be sure to do prayers each Wednesday for the next seven weeks.) This is because the deceased re-experiences death–a kind of “mini-death,”–on these days.

One can also perform pujas and dedicate the merit of virtuous deeds (such as saving lives) to the person in the bardo. Because it has a mental body and is able to perceive, the bardo being is aware of your thoughts and prayers–they get through and are beneficial.
(This is also a reason to avoid excessive lamentation (weeping). They can disturb the bardo being, perhaps creating attachment and longing for the previous life and loved ones.) 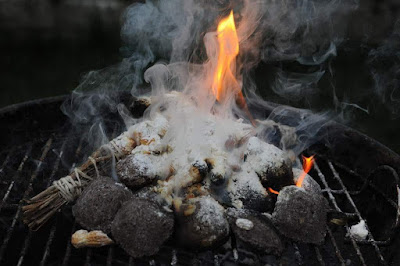 Using the recipe of loving kindness, this is very good to do during the 49 days of the bardo after someone has died. Sur contains substances such as honey, sugar, molasses, milk, yogurt, and butter. But don’t forget to flavor it with your own loving kindness and compassion– bodhicitta mind. You may imagine Chenrezig during this practice and practice his mantra–OM MANI PADME HUNG. Or you can visualize Vajrasattva and chant the One-Hundred-Syllable Mantra, in either case finally dedicating the practice to the deceased. Your compassionate intention will benefit whomever the smoke touches. Without this intention, the smoke alone may cause some benefit, but there is less chance. There is also a mandala that should be burned along with the Sur Offering. (A Sur Kit will be created for the sangha and made available.)

Shitro
Shitro is an elaborate Vajrasattva practice that can be performed during the 49 days of the bardo, ending with a special commemoration and dedication practice on the 50th day. 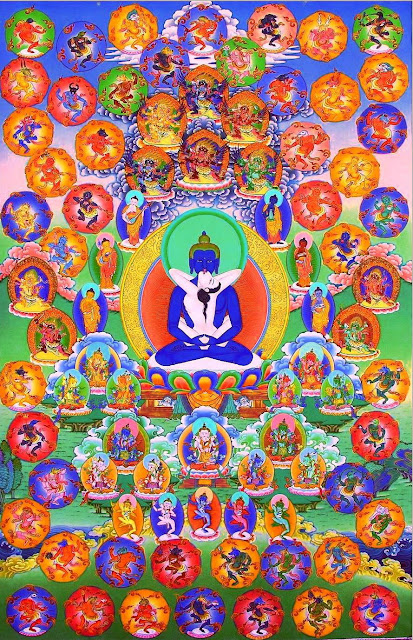 Basically, the practitioner visualizes him or herself as Vajrasattva with the 58 wrathful deities at the crown, the 42 peaceful deities in the heart, and the rigdzins (the energy of the realized masters) in the throat chakra. These deities bless and purify the bardo being to which they are directed in the following manner: The wrathful deities provide power and strength. The peaceful deities provide love and compassion. The rigdzins project a unity of the energies of the peaceful and wrathful deities.
In the ceremony of the 50th or “name-burning day,” the name card, and possibly also a photograph of the person who has died, is burned to the accompaniment of prayers–mainly those of Vajrasattva.  This is also done during the 21st day also. A plate with a candle or butterlamp is used. The card and photograph are burned there and the ashes fall on the plate. Nearby there is a bowl of saffron water. The fire represents wisdom–the burning away of defilements, purifying karma to clear the path of the deceased–and the water represents the clearing of the nature of mind. The ashes are mixed into the water.

Two kinds of tsa-tsas can be made.
The water-element tsa-tsa is created by alternately filling and emptying the tsa-tsa mold with the ash-filled water while chanting the mantra.
Clay earth- element tsa-tsas are made by taking the clay form out of the mold and forming a hole in its center from the bottom. Then the ashes are placed inside the hole with a little of the water (some of the cremation ashes can also be used) along with mantras written on paper “head down” (because they are being inserted into the mold upside down). The tsa-tsas are then allowed to dry.
The ash and water combination can be spread into the river or some favorite place of the deceased, or placed at some secret pilgrimage place. The same goes for the clay tsa-tsas, which will naturally dissolve. 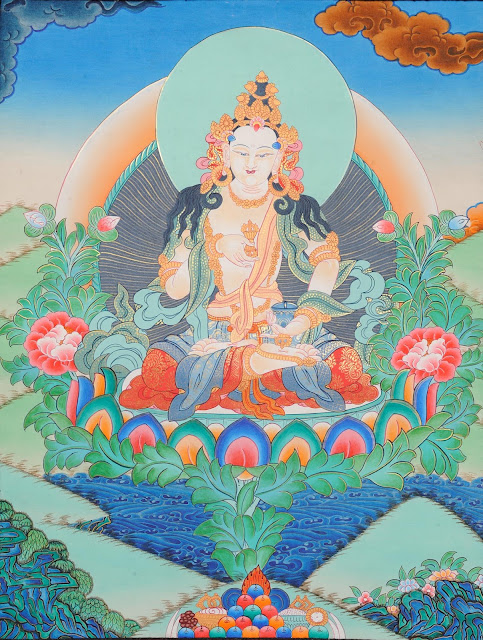 This practice is one of simply chanting Vajrasattva’s One-Hundred-Syllable Mantra a given number of times–practicing with loving kindness and compassion–and then dedicating the merit to the deceased. Vajrasattva is the embodiment of the peaceful deities. Since beings in the bardo encounter confusion and the reflections of karmic propensities, Vajrasattva practice dedicated to them is a form of purification for them that clears their path and helps them find a peaceful journey. This is one short practice that can be done if there is no time to do a longer one such as Shitro. 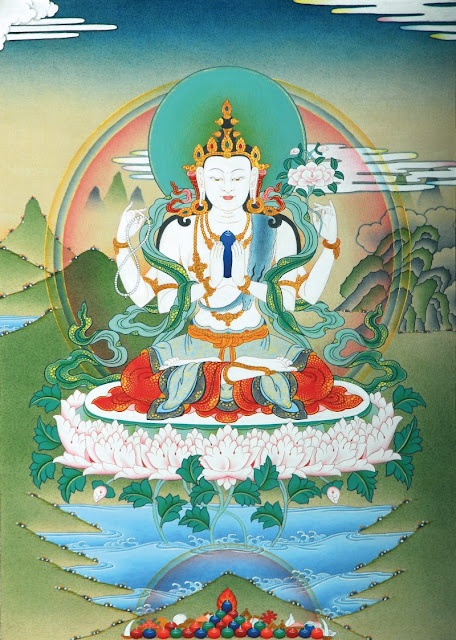 This is another short practice that will bring benefit for the deceased in the bardo. Simply chant this “Six-Syllable Mantra” of Chenrezig/Avalokiteshvara with loving kindness and compassion towards the deceased and afterwards dedicate the merit to them.
By Phub Dorji Wang at May 23, 2019
Email ThisBlogThis!Share to TwitterShare to FacebookShare to Pinterest
Newer Post Older Post Home