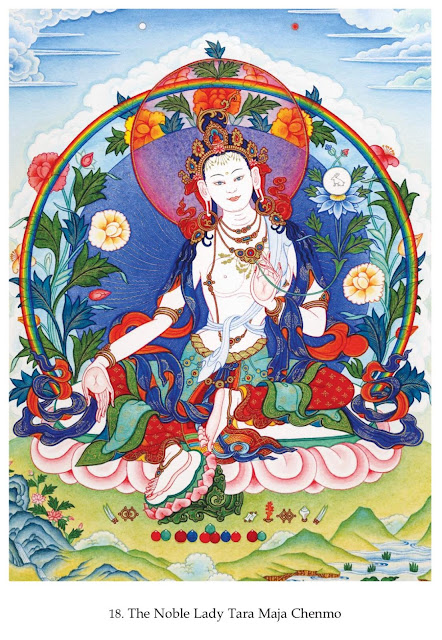 This Tara’s Tibetan name is Tara Maja Chenmo. Now mayura is the Sanskrit word for “peacock”, which is maja in Tibetan, so she is the “great one on the peacock”.

Peacocks are especially associated with protection from poisons because it is said that the peacock eats poison and transforms it into the beauty of its plumage. Thus Tara Maja Chenmo’s special activity is counteracting or dispelling inner and outer poisons. These might be from food, water, environmental pollution, or any type of unhealthy situation. Maja Chenmo is also renowned for her compassion in protecting infants and young children. It is thought that she saved the life of Nagarjuna.
ཨོཾ་རྗེ་བཙུན་མ་འཕགས་མ་སྒྲོལ་མ་ལ་ཕྱག་འཚལ་ལོ། ། 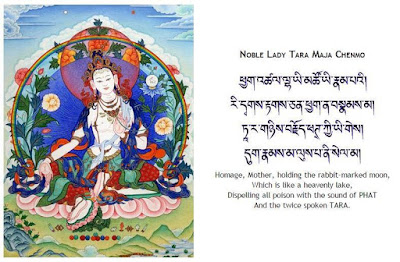 The eighteenth homage is to Maja Chenmo, who averts and pacifies poison. She is as white as the moon, and sits on a blue lotus. In her left hand, she holds a full moon marked with a rabbit, which is the shape of the ocean of nectar of the god realm. With her radiance and her chanting of the mantra, OM TARE TUTTARE TURE SARVA VETRA TARA PHAT SVA HA, which has two TARES and a PHAT syllable, she clears all poisons, both animate and inanimate, without a trace. 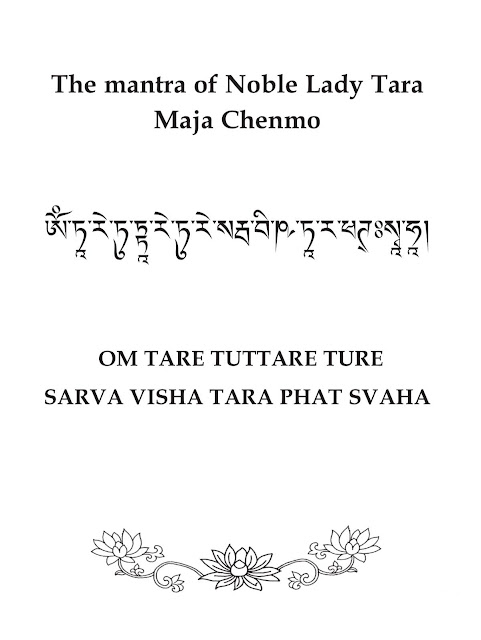 Generally, all obstacles arise from poisons, and the base of all the animate and inanimate poisons is our afflictions. She clears all the poisons of sentient beings without a trace with the medicine of the truth of reality.
On the throne of lotus and moon appears Noble Lady Tara Maja Chenmo, white in color, with one face and two arms. She sits in the dismounting posture. Her right hand is in the mudra of supreme charity. Her left hand, in the mudra of the Three Jewels, holds the stem of an utpala flower. 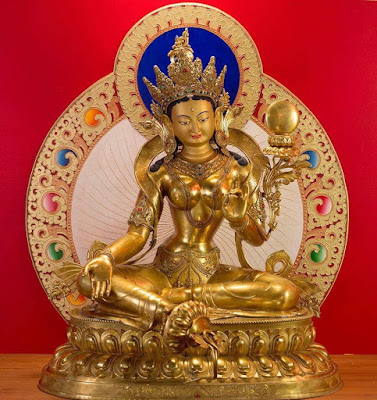 On its pistil is a full moon marked with a rabbit. Rays of nectar light radiate from it, spreading wider and wider in all directions and completely removing all poisons from the environment and sentient beings. Meditate on this and recite the ten-syllable mantra and also the mantra OM TARE TUTTARE TURE SARVA VISHA TARA PHAT SVAHA.
By Phub Dorji Wang at May 31, 2019
Email ThisBlogThis!Share to TwitterShare to FacebookShare to Pinterest

Ringsel (birth of relics of an enlightened Bodhisattva after cremation)

In Buddhism, we cremate the death body. As such we are left with nothing as the body are burnt and ashes are thrown into the river.
However, it is a different story for the highly acclaimed Buddhist monk (Karmapa, Rinpoche, Khyentse, Khenpo, Trulku and so on). When their death body are burnt one can retrieve some remains from the ashes. The substance is thought to be accumulated from other realms, to be not quite of this world 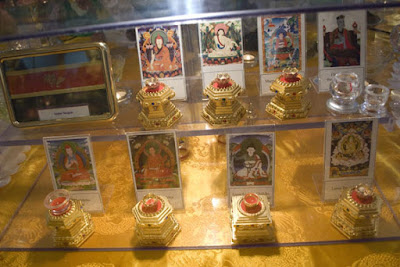 Buddhists believe that the presence of ringsel proves the teacher achieved spiritual purity and that those who view the ringsel can be spiritually transformed. 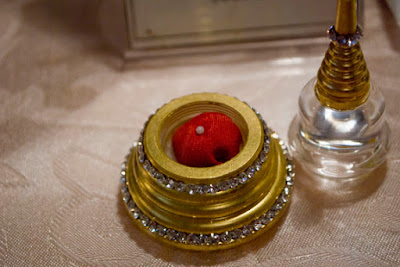 Ringsel often come from past Buddhas or Bodhisattvas of the tenth level. If one has strong faith and devotion, thousands of relics often manifest from just one. It is essential to keep it in a very pure and clean place, cared for very well. Prayers and offerings should be done; otherwise it may not multiply. 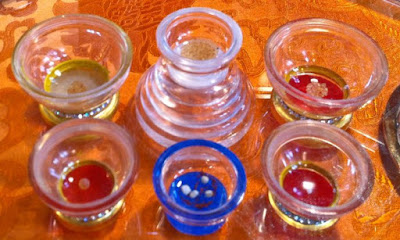 These relic bones could be considered being a precipitation of bliss arising from the central nervous system of highly realized masters and the activity of the Bodhisattvas. 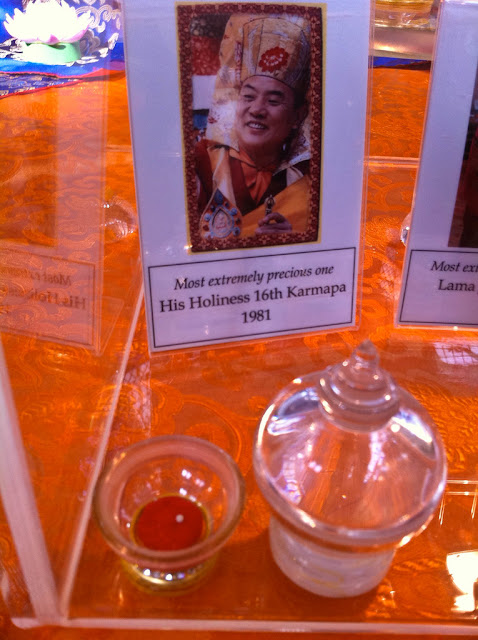 These precious "ringsels" exude a powerful blessing, as they are from the very body of the Buddha.
They are often used for the consecration of stupas, temples and shrines. Always treated with the utmost respect, they are kept in special, (preferably high) places and can also be worn for protection and blessings. 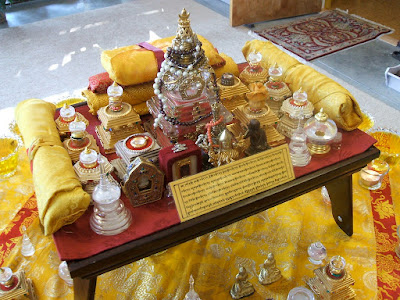 Usually they are not taken internally. However, they may be taken when one is very sick and close to death. When they are used like that, it is said that the essence of the "ringsel" rests at the crown of one's head. 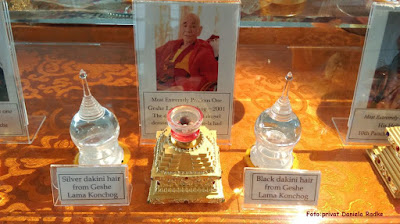 For those with meditative concentration, the "ringsel" will quicken the opening of the crown chakra at the top of the central channel, helping to prevent the possibility of falling into the lower realms upon leaving the body in the moment of death. 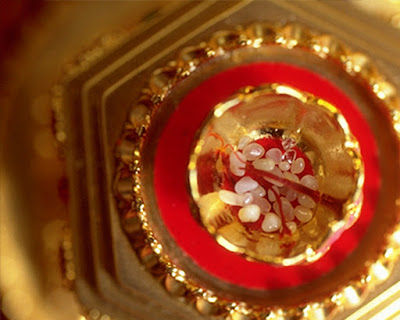 One who swallows the sacred relic will never go to hell! I have also swallowed a small piece of Buddha's ringsel.
My grandmother's brother Tshampa Phanto also left countless ringsel, which is kept at Wangduephordang Dzong. His ringsel are different from other with five colours  which now has turned into small statues based on the colour, white Chenrigzi, blue Chana Dorji etc. His ringsel is first of its kind.

I also have many ringsels. Daily rituals and prayers are being performed to exude blessing to all sentient beings.

By Phub Dorji Wang at May 31, 2019
Email ThisBlogThis!Share to TwitterShare to FacebookShare to Pinterest 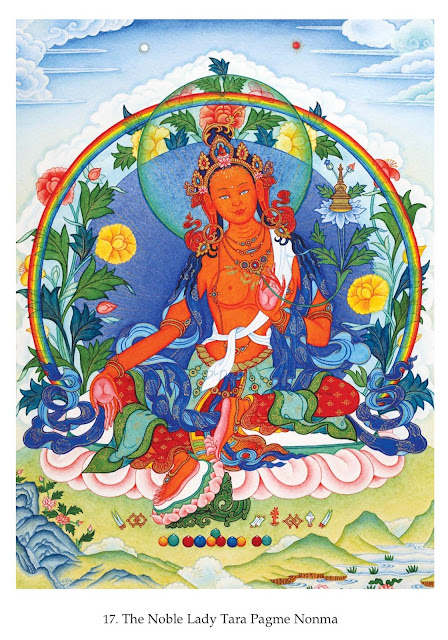 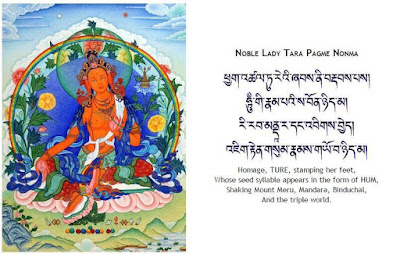 The seventeenth homage is to Dolma Pagmed Nonma. She is orange like saffron, sits on a blue lotus and holds a stupa. By saying TURE, stamping on the ground, and the radiating seed syllables from the HUNG at her heart, she shakes all the abodes of the great gods, including Mount Meru, Mandhara and Vindhya.

The effect of her actions extends beyond the three thousand worlds. Her stamping causes the three realms: desire, form and formless, on the subterranean, terrestrial and celestial worlds, to quake and quiver.
By the power of her frightening forces, she crushes butchers, thieves, and other enemies under her feet and gives peace to all beings. The ultimate meaning is that the quavering of the three worlds is purification of the three doors, (body, speech and mind). 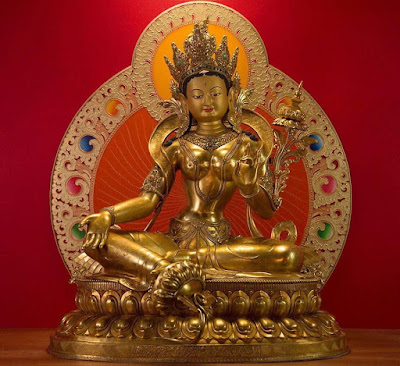 On the throne of lotus and moon appears Noble Lady Tara Pagme Nonma, golden-red in color like the clouds at sunrise.
She sits in the dismounting posture. She has one face and two arms. Her right hand is in the mudra of supreme charity. Her left hand, in the mudra of the Three Jewels, holds the stem of an utpala flower.
On its pistil is a stupa.
Rays of light in the form of countless syllables HUM radiate from the HUM in her heart. This light and her feet striking the ground shake Mount Meru, Mount Mandara, Mount Bindu- chal and the triple world. 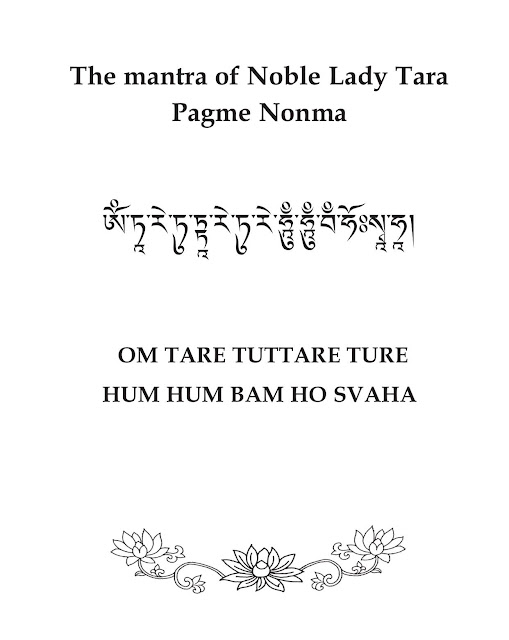 By this wrathful power, all the obstacles, objects of your concentration, are suppressed under her feet. Meditate on this and recite the mantra.
By Phub Dorji Wang at May 25, 2019
Email ThisBlogThis!Share to TwitterShare to FacebookShare to Pinterest
Newer Posts Older Posts Home
Subscribe to: Posts (Atom)