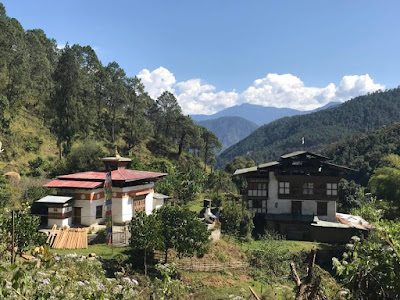 Woh! Lama Drukpa Kunley's arrow voyaged approximately 169 km after freeing from Tibet to Toep Chandhana (Western Bhutan) in the 15th Century. Lama Drukpa Kuenley just used his simple bow. Isn’t it a great miracle?
His focus was to find his dream woman, eliminate fearful demons and spread Buddhism. Alas the most sacred relics, a ladder that his arrow landed and also the house where he dwelled for some years find no visitors today. 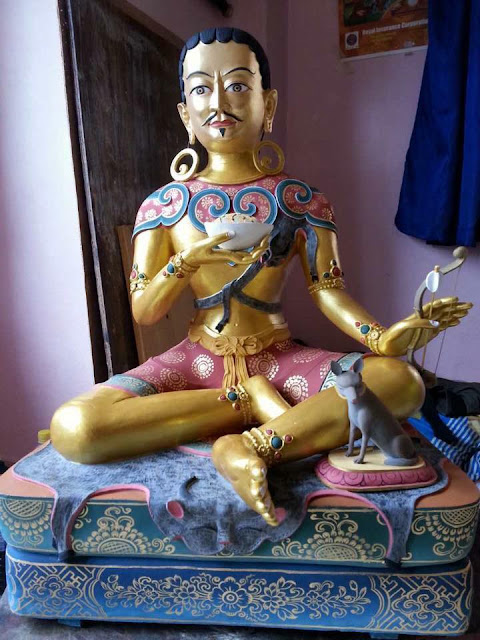 I am very privileged to visit this historical site and get blessing from Lama Drukpa Kuenlay’s artifacts.  To reach there one has to cross Thinlaygang (Thimphu to Lobesa route) and take small feeder road on the left side. Drive cautiously and whenever intersection roads are encountered always take the right road. You have to drive till the end of the feeder road, which is approximately 5 KM, and there emerges the historical place of the great Divine Madman. 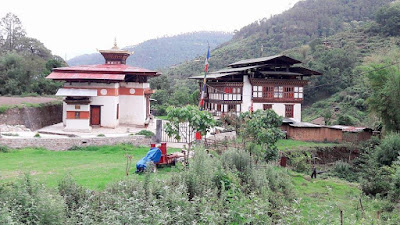 The house is still intact. The precious ladder is stored at the main Altar. I asked the Lam to show me the exact point where the arrow hit. The lam explained that it couldn’t be seen, as the ladder is long and placed behind the altar. What we can see is only the ladder. The arrow has landed on the third ladder step counting from top. This is accessible only if whole altar is removed. 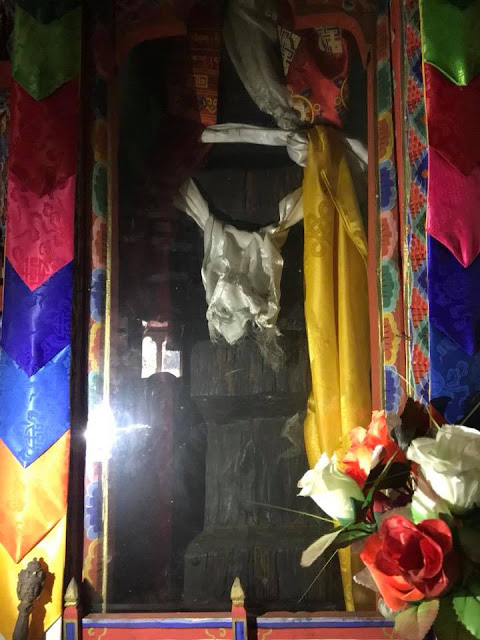 I prostrated 3 times and ask Shomo (dice divination). The caretaker Lama informed me about Lama Drukpa Kuenley’s Shomo, which is 7. Surprisingly my dice rolled 7. The Lam was bit surprised for hitting the bull eye and declared that Lama Drukpa Kuenley has given his blessing to me. 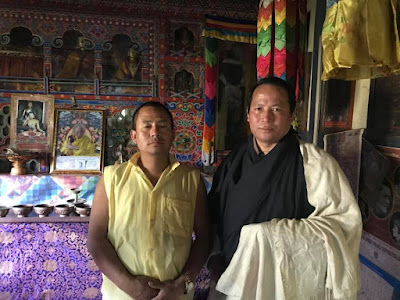 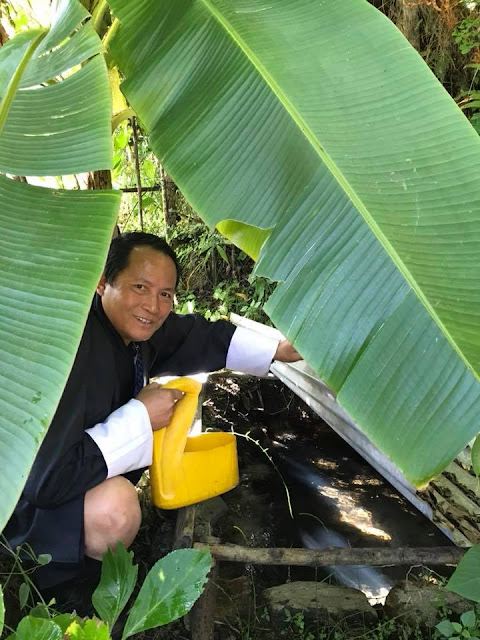 The place is very tranquil and peaceful. I felt internal happiness and was wondering the reason how a great saint stayed around this locality.
The area needs development and I strongly feel, if tour operators could include this historical site in their tour itinerary. This will bring development to the Monastery and blessing to the visitors.

Why did Lama Drukpa Kuenley shot the arrow? 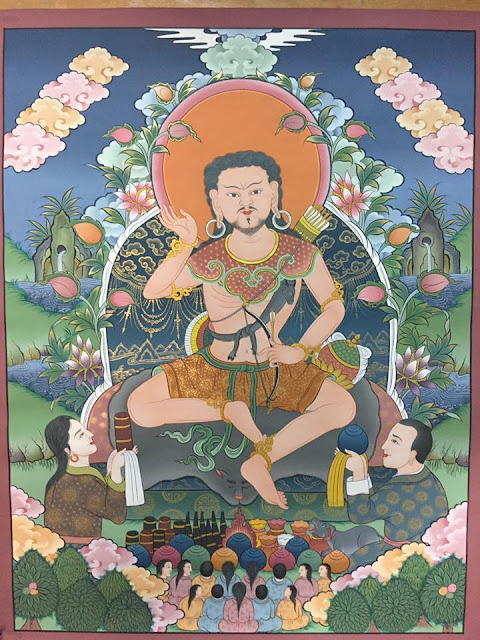 One night, when Lam Drukpa Kunley was sleeping at lady Semzangmo’s house at Nangkatse in the province of Yamdrok in Tibet, he dreamt of a woman asking him to shoot an arrow in the direction of Bhutan.
Recognizing the woman as a ‘smoky goddess’, the lam next morning strung the bow shot into the southern sky the arrow that landed on the ladder of Teob Tshewang’s house in Chandanang. The family ran outside fearing an earthquake, until they found the arrow quivering on the ladder. Knowing that it was a good omen, Tshewang’s young wife, Palzang Buthrimo, who was believed to have signs of dakini wrapped the arrow in silk and placed it on the altar.
Hence, the house came to be known as Toeb Chandanang, which literally translates into “landing of the arrow.”
Today a ninth generation of Pelzang Buthrimo, the wife of Toeb Tshewang, who later became one of Drukpa Kunley’s many consorts, is the present owner of the traditional building that still preserved the ladder on which Drukpa Kunley shot an arrow from Tibet. To accommodate the ladder, they have done few structural changes on the building. Rest remain exactly same as used by Lama Drukpa Kuenlay.

The landing of an arrow was an indication of Drukpa Kunley’s arrival to Bhutan to spread the Drukpa Kagyu teachings. Today many people are not aware of these sacred relics. Visiting Chimi Lhakhang visitors are happy or  may be people are not aware of the arrow that he shot from Tibet to Bhutan (which itself is a wonder) and the house where he stayed the maximum when in Bhutan.
To continue with the story Lama Drukpa Kuenley arrived at Toeb Tshewang’s house to ask for his arrow. Upon seeing the divine countenance and full-bloomed flower like face of Palzang Buthrimo in the house, the lam sang:
“The arrow has certainly not gone astray since it has led me to this voluptuous goddess. Tshewang, mine host, please leave us, I must lay this lady this instant” saying that, the Lama Drukpa Kuenlay immediately ‘picked up’ Palzang Buthrimo, but Tshewang, in a rage, retaliated with a sword, which the lam caught and folded with his right hand, while his left hand firmly held Palzang Buthrimo.

Awed by his mystical power, Tshewang then offered his wife and residence, and asked the lam to stay there for his entire life.
Lam Drukpa Kunley’s son, Dungsey Ngawang Tenzin, who was born to Palzang Buthrimo, offered the sword, arrow and a stone, on which the lam left his fingerprint, as the main nangten of a statue in Tango monastery in Thimphu.
It was believed that the lam stayed there until his son, Dungsey Ngawang Tenzin was 10. Ngawang Tenzin became a monk at Ralung monastery in Tibet, and later founded Tango monastery.
His line of generation passed down Drukpa lineage, after his son Tshewang Tenzin begat the fourth Druk Desi (secular ruler), Gyalse Tenzin Rabgye, who became the main propagator of the Drukpa School, according to the biography.
The lam sculpted a statue of Buddha Shakyamuni and one of himself, drew murals of the eight manifestations of Guru Rinpoche, and Tungshak (thirty five Buddha of confession) on a temple above Tshewang’s house. 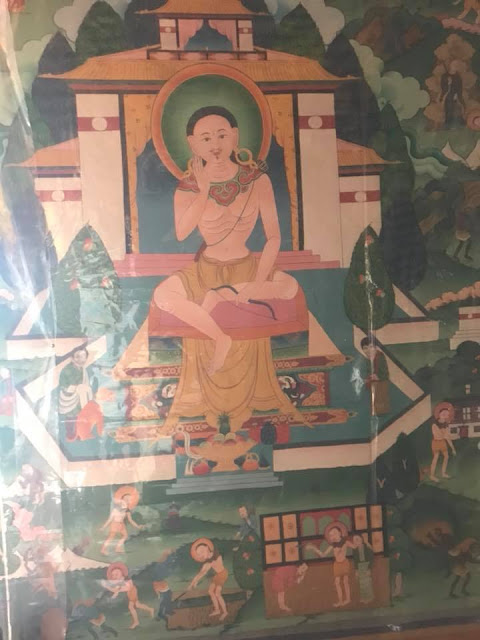 Despite the temple being old and sacred, there are hardly any visitors today.
We should therefore explore the historical house and the monastery above to see the sacred relics and get Lama Drukpa Kuenlay's blessing. 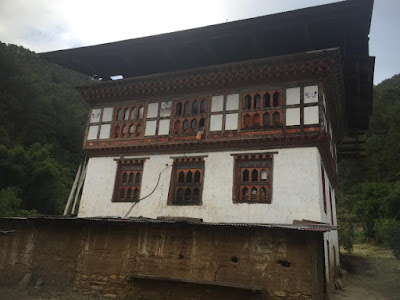 You must visit Toeb Chandhana to explore more. What I have given was bit of information. Happy Visit.
By Phub Dorji Wang at March 20, 2019
Email ThisBlogThis!Share to TwitterShare to FacebookShare to Pinterest
Newer Post Older Post Home