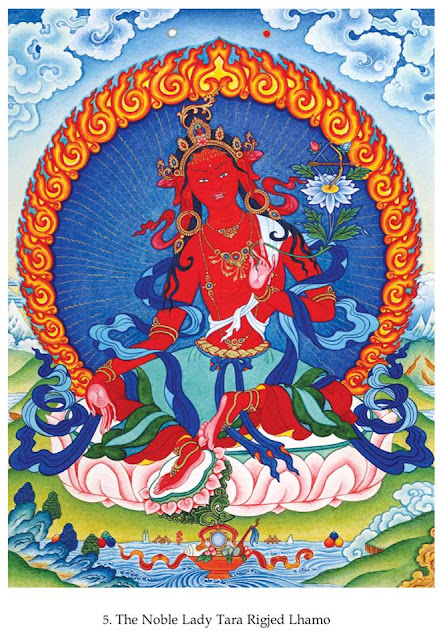 The fifth Tara is Wangdu Rigje Lhamo. She is Kurukulle in Sanskrit and Rigjema or Rigje Lhamo in Tibetan. Wangdu means power of “gathering, summoning”, or “magnetizing”. We can think of it as attracting everything beneficial, to benefit all beings. Rigjema means “she who precisely understands everything”. And Lhamo is “divine lady”. So she is the Tara who precisely understands the power of magnetizing.
Kurukulle‘s practice is very extensively taught throughout Tibetan Buddhism. She is often named the “Red Tara” because of her colour.
ཨོཾ་རྗེ་བཙུན་མ་འཕགས་མ་སྒྲོལ་མ་ལ་ཕྱག་འཚལ་ལོ། །
om jetsünma pakma drolma la chaktsal lo
Oṃ, Homage to the noble lady Tārā!
ཕྱག་འཚལ་ཏུཏྟཱ་ར་ཧཱུྂ་ཡི་གེ །
chaktsal tuttara hung yigé
Homage to you, who with tuttāra and hūṃ
འདོད་དང་ཕྱོགས་དང་ནམ་མཁའ་གང་མ། །
dö dang chok dang namkha gangma
Fulfil all wishes10 unto the bounds of space.
འཇིག་རྟེན་བདུན་པོ་ཞབས་ཀྱིས་མནན་ཏེ། །
jikten dünpo shyab kyi nen té
You who trample underfoot the seven worlds,
ལུས་པ་མེད་པར་འགུགས་པར་ནུས་མ། །
lüpa mepar gukpar nüma
And have the strength to summon all. 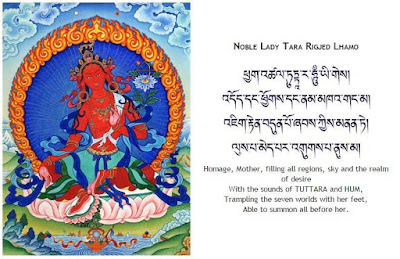 The fifth is the praise to Rigyed Lhamo, “All-Knowing Lady” who has the quality of magnetizing. This red Tara sits on blue lotus and holds a bow and an arrow. She fills the desire realm, its aspect, which is the form realm, and space, which is the formless realm, with the brightly radiating TUTTARA mantra, we and the sound of HUNG. (Phyogs in Tibetan is an ambiguous word.
In this instance, the author of the commentary interprets it as “the aspect” of the desire realm.) This is because beings in both the desire realm and the form realm share the same aspect of having form.
Likewise, “space” is interpreted as the formless realm. The radiance of the TUTTARA mantra and the sound of HUNG symbolize her realization of emptiness and compassion. She conquers the seven worlds by just trampling them with her feet. If she is able to summon all of these forces without exception just by the power of the mantra, there can be no doubt of her power over the lesser forces, for example: sangha, kings, ministers, and landlords. 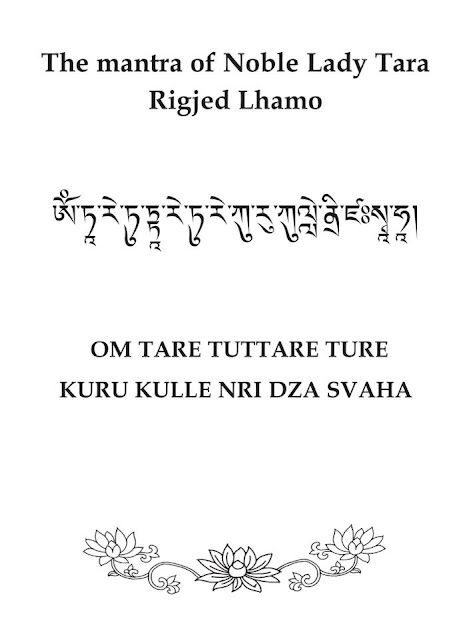 There are a number of different identifications of the seven worlds. Jetsun Drakpa Gyaltsen points out they are the five goers, and the two upper realms, which makes seven. Drolgon Zhab says the seven worlds are the realms of the nagas, pretas, asuras, humans, vidyadharas, kinaras and gods; the seven realms with power. In the commentary by Gedun Gyatso, the seven realms are comprised of the six realms: (the realms of the gods, jealous gods, humans, animals, hungry ghosts and hell-beings), and the realm of the bardo, (which is also known as the intermediate state).
Others write that the seven worlds are: the sky, the form and formless realms, and the worlds of ten directions. Rigyed Lhamo magnetizes and leads beings to the path of the three yanas. The ultimate meaning is that through practice, when non-conceptual neutral alaya’s clarity is cognized, the formless realms dissolve. When the simple pure luminosity of the undiscriminating clarity of alaya-vijnana, or “base of consciousness” is cognized, the form realms dissolve. When mental consciousness is free from delusion and the five sensory cognitions, the desire realm ceases. These cessations are the abiding purity, or the fruition of purification.
At this stage of awareness, the seven worlds are the seven cognitions, where all the concepts of desire and the other three realms without exception dissolve into dharmadatu. 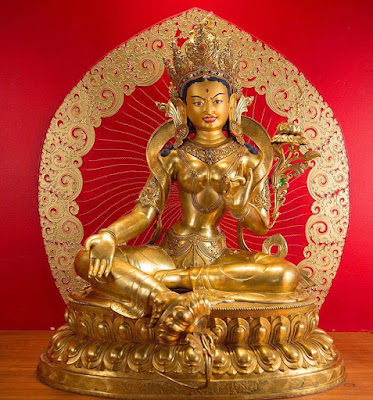 On a throne of a lotus and moon appears red Kurukulle with one face and two arms. She sits in the dismounting pos- ture.
Her right hand is in the mudra of supreme charity. Her left hand is in the Three Jewels mudra. At her ear, on the pistil of an utpala flower, is a bow and arrow ready to shoot. Sharp rays of light blaze from it, destroying the pride of all the arrogant ones of the seven worlds.


They put the dust under the feet of the Victorious Lady on their heads. Meditate on this and recite the mantra.
By Phub Dorji Wang at March 28, 2019
Email ThisBlogThis!Share to TwitterShare to FacebookShare to Pinterest
Newer Post Older Post Home