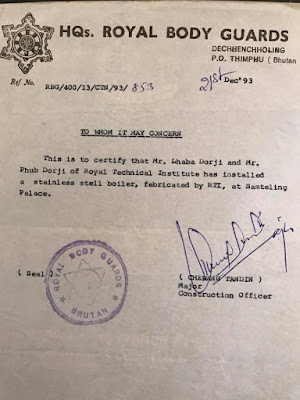 We were given all access to the palace and served lunch along with teachers stationed there to teach Princes and Princess.

I was stunned by the simplicity of His Majesty's life. The palace was actually not a palace. It was a simple bungalow made with wooden buckles (outer pipe tree's cover) and plastered with ordinary mud. Even the painting was so simple and brief. Initially, I was looking for the beautiful palace and thought that was rooms made for the palace's workers but I was wrong. It was His Majesty's Palace.

A single basketball scoring board was the only game facility at the palace. This is how our 4th King lived.

A moment of comparison His Majesty's simple life with that of serving ministers who stayed a luxurious life, a tear rolled down from my eyes. I wiped with my white teko and concentrated on doing a good job. Imagine we are putting a boiler, actually electrical heating equipment (gezer) would be the best choice but His Majesty had chosen a simple heating system.

His Majesty worked selflessly for his people leaving all the comfort of his life to his subjects.

By the way we have done a good job and His Majesty the Fourth King appreciated that. I am extremely happy about it.

Working at His Majesty's place was my greatest achievement.