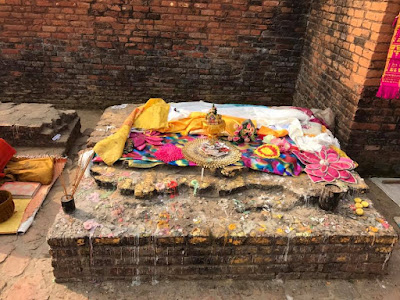 (The throne of Buddha from where he performed miracles)
I am very fortunate to visit the exact location where lord Buddha displayed several miracles at Shravasti.

Initially, I thought it had happened within the enclosure of Shravasti. But No, the exact place is around 2 km away from Shravasti. Located on a hillock of around 50 meters height, it prominently stands tall in the middle of vast plain all around. Any number of people can be easily be accommodated, and I have concluded the very reasons why Buddha had chosen the ideal location with millions of people gathered during that event to witness the challenges. 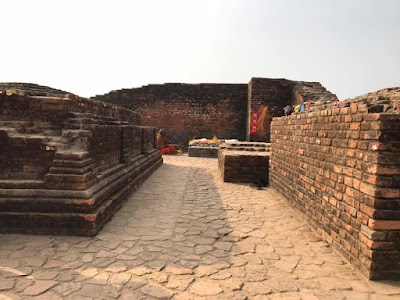 (The ruined monastery, inside is the throne of Buddha from where he performed miracles)
We can still see the throne that Lord Buddha used. I am totally touched by the monumental evidence and had visualized Buddha sitting there.
The miracle of the "double appearances. When the Buddha laid down a rule forbidding the exercise of supernatural powers by monks - following on the miracle performed by Pindola Bhāradvāja - the heretics went about saying that henceforth they would perform no miracles except with the Buddha.

King Bimbisāra reported this to the Buddha, who at once accepted the challenge, explaining that the rule was for his disciples and did not apply to himself. 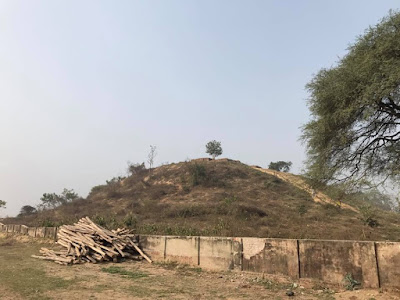 (The hillock in the middle of vast plain where Buddha throne was located)
He, therefore, went to Sāvatthi, the place where all Buddhas perform the Miracle. In reply to Pasenadi, the Buddha said he would perform the miracle at the foot of the Gandamba tree (mango tree) on the full moon day of Asālha.

This was in the seventh year after the Enlightenment.
The leaders of India's six main philosophical schools had challenged the Buddha to a contest of miraculous powers many times as he wandered through the surrounding kingdoms.
Six evils, heretic teachers led by Purnakasyapa had become mad with resentment and jealousy against the Buddha, and tried to engage him in a contest of miraculous powers, which Mara had persuaded them they could win. King Bimbisara laughed them out of court when they petitioned him, but they persisted, and finally he went to request the Buddha's participation.
The Buddha agreed, but stipulated that he would set the time of the contest. A teaching throne was set up in a large arena at Rajagrha, but shortly before the proposed contest, the Buddha and all his followers departed for Vaisali. Seeing this as an admission of defeat, the six heretic teachers were elated, and rushed after the Buddha, with their ninety thousand followers, and after them, king Bimbisara and his entourage. The heretics urged the Licchavi king to stage the contest there, and the Buddha again accepted, but said he would set the time. 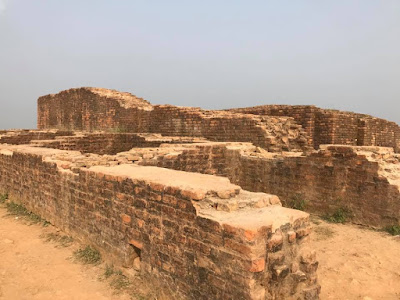 (The ruined structure)
The Buddha then moved on, from one city to the next; each time giving the same answer, and gathering a new following, until they came to Shravasti.
The heretics soon arrived, and remonstrate with king Prasenajit not to allow any further postponement, and the Buddha assented that the time had now come. Buddha was fifty-seven years old when the conditions were most auspicious to accept this challenge.

King Prasenajit built a hall in Shravasti especially for the event; in it seven thrones were erected. On the new moon of the first month of spring (what is now known as losar, the beginning of the Bhutanese new year), the six other teachers took their seats and Shakyamuni came to his flying through the air.

He was honored with extensive offerings. He then sent forth fire and water from his body and the hall was destroyed and reformed as a transparent palace.
Before the kings of all the capitals he had passed through, the six heretics and their followers, and a huge assembly of gods and humans, he performed inconceivable miracles for the next fifteen days. 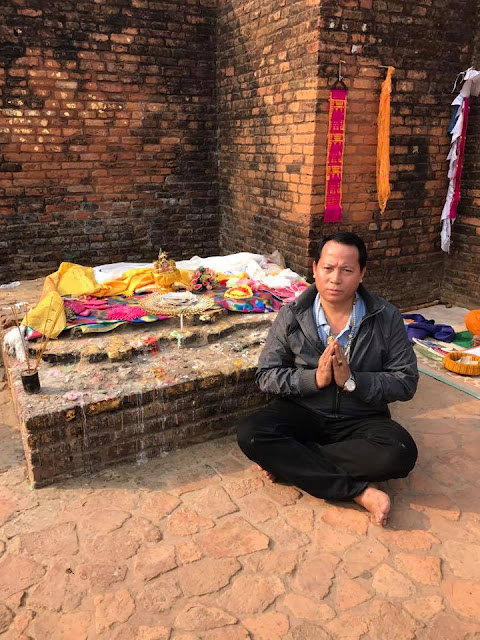 (Enjoying great moment at the feet of Buddha’s throne)
The heretics were so scared that they leapt into the river. Then, the Buddha radiated eighty four thousand rays of light, one from each pore of his skin, which filled the sky. On the tip of each ray was a lotus, and on each lotus a buddha, with attendants, teaching Dharma, and all were amazed, and some were liberated by the sight of it.

In these eight days Buddha Shakyamuni utterly defeated his opponents. The ninety thousand followers of the six heretic teachers adopted the Buddhist doctrines, joined the monkhood, and later became arhats. For a further seven days Buddha Shakyamuni continued to show miracles and give teachings to the great assembly.

At the conclusion of the Miracle, the Buddha, following the example of his predecessors, made his way, in three strides, to Tāvatimsa, there to preach the Abhidhamma Pitaka to his mother, now born as a devaputta.