Remove your negative deeds by reciting names of 35 Buddhas 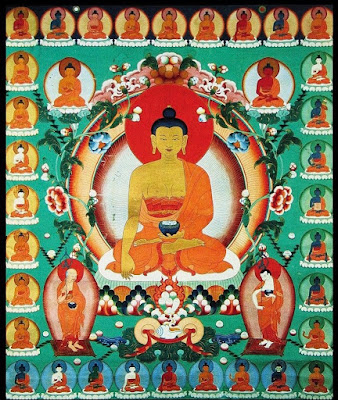 The 35 Buddhas for Confession of Moral Downfalls

Bodhisattva’s Confession of Moral Downfalls being one of the most popular. We all have done actions that we now feel badly about doing, and we have aspects of ourselves that we do not like and wish to change. Purification practices are excellent means to remove emotional burdens such as guilt, as well as to pacify the obstacles to our happiness and self-improvement created by the imprints of our destructive actions. Guilt over past actions is useless, only leaving us feeling helpless and hopeless. On the other hand, acting to purify negative imprints and afflictions is very productive. It helps us to change our bad habits and subdues obstacles to long life and success in our spiritual practice.

Note: beside each name of BUDDHA, the the type of negative action that it helps in purifying is also given. An eon is a really, really, super-long, impossible-to-measure length of time.)

Tathagata Thoroughly Destroying with Vajra Essence
(The ripening of effects of wrongs done over 10,000 great eons)

Tathagata King, Lord of the Nagas
(Non-virtue committed over 1,000 eons)

Tathagata Pure One
(Negativities committed arising from the attachment of 10,000 eons)

Tathagata Bestowed with Purity
(General non-virtues of the 10,000 eons)

Tathagata Deity of the Water God
(Non-virtue committed over 5,000 eons)

Tathagata Sorrowless Glory
(The potencies of actions done out of ignorance)

Tathagata Glorious Flower
(The latent traces of all physical non-virtues)

Tathagata Glorious Mindfulness
(Negativities arising from despising others or abusing them)

Tathagata Glorious One Totally Subduing
(Negativities arising out of slander)