Let me narrate my first visit to Paro Taktsang in November 2016. 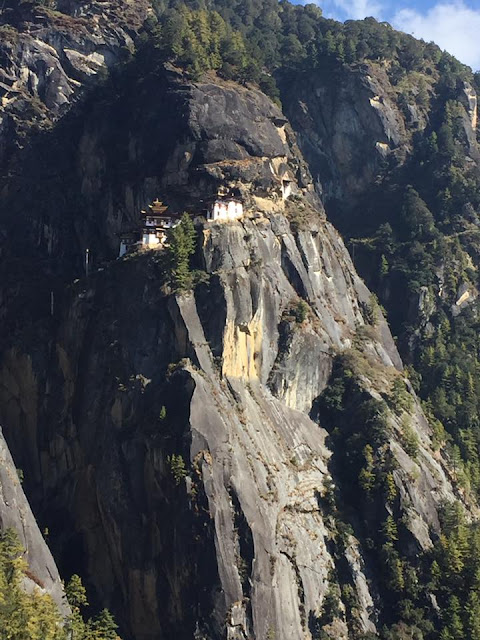 Well! It look bit shameful for being Bhutanese and not able to visit the Great Paro Taktsang till yesterday. You know everything need auspiciousness and timing to receive the natural blessing.
A day was blessed today to be at the holiest Guru Rinpoche's site.
The blessing rayed after I received my travelling Guru Rinpoche's statue (given proper Zung and Rabney), which will remain with me all the time. There was inner urge to take the small statue to Paro Taktsang and get blessing from the site. Automatically my new statue BLESSED me to reach Paro Taktsang today.

Accompanied by my Nephew, Dophu Sr. Forest Ranger, Paro and my brother Pasa Wangchuk today we set to Paro Taktsang all of a sudden and without any plan. 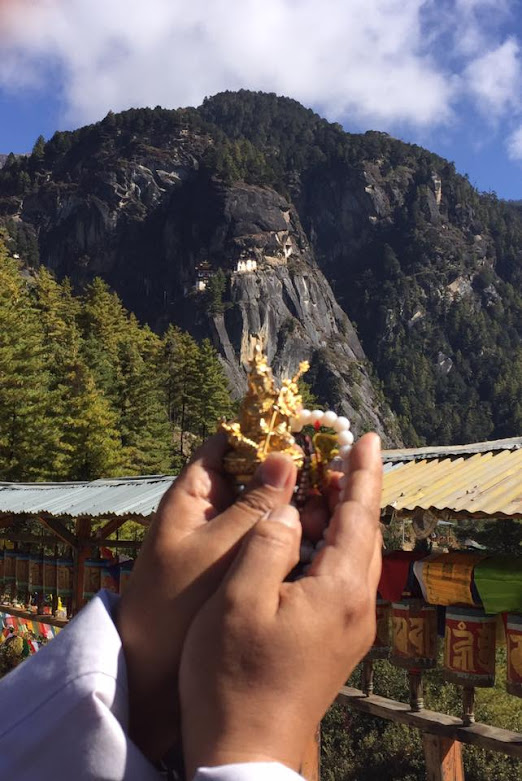 It was a difficult journey of approximately 9.2 km round trip and a climb of 162 floors. It took us 5 hours. Walking stick helped in climbing and descending which is available at Nu. 50/- at the starting point. There were many visitors from different countries negotiating and climbing the steep path some returning with great memory. One thing was very clear; Paro Taktsang is one of the most photographed Monastery as every visitor was seen clicking including me. 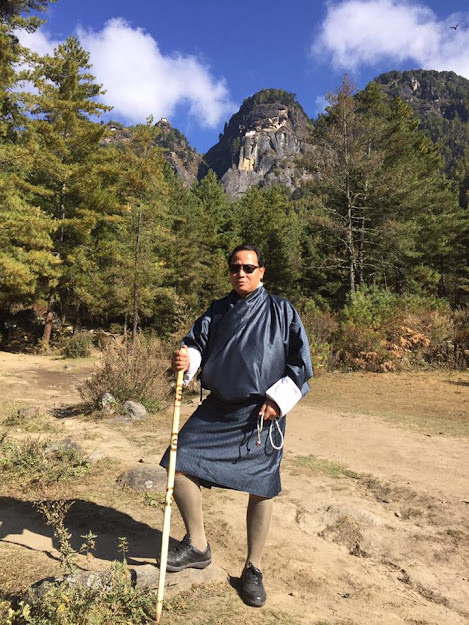 The following were what I saw:
Dakinis Falls 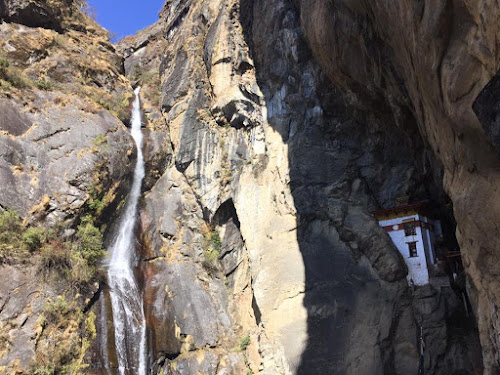 First we encountered a beautiful waterfall. It is called Shelkarchu or Crystal Stream. It is believed that when Khamdro Yeshey Tsogyal threw her rosary against the rock the stream gushed forth miraculously like a crystal.
Reaching proper Taktsang we have visited various Monastery as under:
Guru Drolo Lhakhang
This monastery houses Guru Drolo riding on the tigress. This is a real manifestation of how Guru Rinpoche arrived at Taktsang cave. Nearby, there is an entrance to main mediation cave of Guru Rinpoche. At the moment it was closed and sealed. It is opened only once in a year. The same cave was used by:
We offer butter lamp and receive Khadar from the cave.
Guru Sungjonma Lhakhang
After coming out from Guru Drolo Lhakhang, one need to climb a staircase and reach next floor. Just on the right side there is an entrance to this important Lhakhang.
The Lhakhang houses SELF-speaking Guru statue. On enquiring, the Taktsang Lam was kind enough to explain me the significance of this Guru statue.
This Guru statue was sculptured by Pentsa Deva at Punakha and brought to Taktsang. On arriving at the entrance of the sacred site people were clueless as how to carry to the Monastery. At that period the statue is supposed to have spoken " Do not worry, for someone shall come to carry me to Taktsang. The statue was found next day at the temple. The main guardian deity of Paro Taktsang Senge Samdrup carried it. Ever since it was called Temple of the self-speaking statue of the Guru. We found group of Indian in deep meditation. I prayed and received Khadar from the Guru statue.
Guru Tshokey Dorje Lhakhang
After coming out from Guru Sungjonma Lhakhang, on the left side this Monastery was located. Inside, we found new statue of Guru Tshokey Dorje. We prayer and received blessing.
Dorji Drolo Shrine
Coming out from Guru Tshokey Dorje Lhakhang we have proceeded up by climbing and found an impressive Lhakhang. The monastery houses statue of Tsepamed, Guru Rinpoche, Dorje Drolo, Phurpa and Nedag Zhaw (Vajrasattva). All statues looked huge. We offered butter lamp and prostrated before the statues. The Lam gave us Khadar picking from the statue.
Tshepamed Monastery
At the extreme edge of the cliff we visited three storied Monastery. Ground floor houses Tshepamed statue and the monastery is called by its statue name. We prayed and received blessing.
6. Guru Namse Lhakhang
On the second floor, we found Guru Namsey who is a protector of the Dharma. You will also find Visravana (diety of prosperity) and King of the North.
Naykhang (The Shrine of Deities)
We found this monastery was locked. However, we prayed from outside. 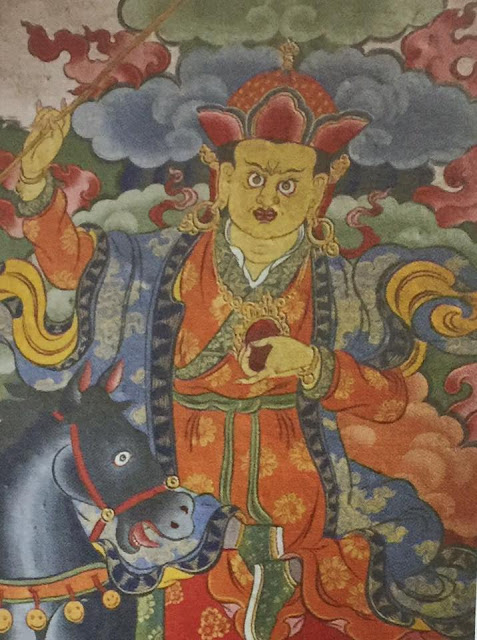 This Naykhang houses Senge Damdrup, the main guardian deity of Paro Taktsang. Damchen Dorje Legpa another deity who brought bone relics of Langchen Pelgyi Senge to Taktsang from Nepal and concealed it in the cave as a treasure.

Langchen Pelgyi Senge Monastery
Finally we enter this monastery, which is the last Monastery in a cycle. Just entering, we found an opening to the Pelphug cave from top. Only to view from the top. It was properly lit and one can see partial view of the cave. Many Nendra (currency notes) was seen and I have offered my nyendra too.
Just on the other side, one can see self-arising Dorji Phamo statue. Truly blissful.
Entering another partition one can see Langchen Pelgyi Senge relic stupa. In 853, one of Guru Rinpoche's students Pelgyi Senge mediated here in the main cave. The stupa inside contains his mortal remains and therefore the cave is known as 'Pelphung or Pelgi's cave'. At the backside you will find drupchu.
Tiger nest
We nearly missed this visit. It was located between Dorje Drolo Lhakhang and Naykhang monastery just by the side of butter lamp house.
With certain difficulties we negotiated through unproportionate wooden ladle and reach to the last spot. It was partially dark as was lit by butter lamp burning right at the end of the cave. It was here that Khandro Yeshey Tshogyal resided transforming herself into a tigress. Here Khandro Yeshey Tshogyal vanquished Sengye Sandrup.
Offered nendra and received Khadar.
So that completed our visit.
Finally, we visited Khandro Yeshey Tshogyal hermitage offer butter lamp.
The visit was truly extraordinary and strongly urged all Bhutanese to visit once.

History
Taktshang or the Tiger's lair as the monastery is widely regarded is one of the most important in Bhutan.
Its history is associated with the visit of Guru Padmasambhava, the Indian saint who came to Bhutan in the 8th century AD. According to the legend, the cave was named Taktshang, after Guru Rinpoche is said to flown here from Kurtoe Singye Dzong in eastern Bhutan on the back of a tigress.
Guru Rinpoche then manifested into a wrathful form known as Guru Dorji Drolo to subdue the demons. The monastery is one of the main among thirteen Taktshangs, predicted to be built in the Buddhist world.
The cliff on which Taktshang stands is also supposed to resemble a ritual dagger known as Phurpa. Many Buddhist masters also spent time here in meditation.
The foremost being Langchen Pelgi Sengye, one of the 25 disciples of Guru Rinpoche, who also named it as Pelphug (the cave of Pelgi). Langchen Pelgi Sengye went to Nepal after a spell of meditation in Taktshang and died there. However, Damchen Dorji Legpa (protective deity) is said to have brought back his kudung (bone relic), which is still preserved today. 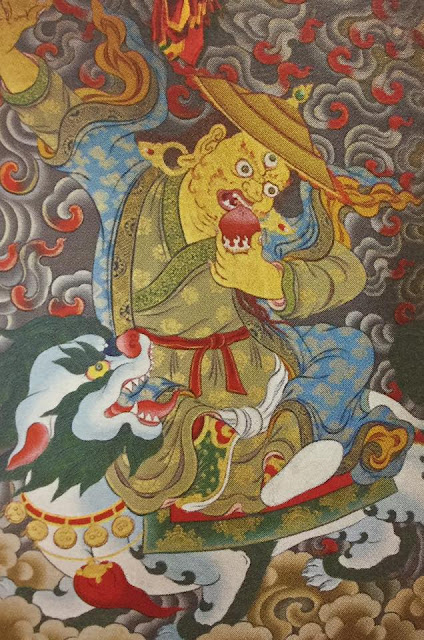 It is still believed that Langchen Pelgi Sengye on auspicious days pay visit to Taktshang and the chorten, which contains his remains, is believed to fulfill one’s wishes.
The site was later visited by many other Buddhist saints and masters including Milarepa, Thangthon Gyalpo and Phajo Dugom Zhigpo. Later it was also visited by Zhabdrung Ngawang Namgyal and conducted Monlam Chenmo (the great prayer ceremony), and a Drubchen (consecration ceremony) for a week in honor of Tshepamed - Amitayus and formally took charge of Taktshang.
Jinpa Gyeltshen, the brother of Tenzin Rabgye was also appointed as the Taktshang Lam, which was then a small shrine. The fourth Druk Desi Tenzin Rabgye laid the foundations of the Taktshang Monastery and the construction began on the 10th day of the Water Monkey Year in 1692.
The two-storied monastery was finally completed after three years corresponding to the Wood Dog Year in 1694. The first Lama to be installed was Sakya Tenzin.
Next to Taktshang is a waterfall known as Shelkar Zar. This is believed to be the Drupchu (holy water) of one hundred thousand dakinis. Beside the waterfall is the main seat of Guru Rinpoche on a rock where he preached to his consort Khando Yeshey Tshogyal. As a blessing, he gave his crystal rosaries to Khando Yeshey Tshogyal and thereafter the area came to be known as Shelkar Zar.
On the left side of Shelkar Zar is a small meditation cave in which Khando Yeshey Tshogyal and Guru Rinpoche meditated. The stone seems to resemble a lion’s face and therefore the cave is known as Sengye Phug.
The monastery was burnt down in 1951 by the fire, which was started accidentally by a woman while preparing her land for the next crop and burning the old stalks, the fire became uncontrollable and in the process reached Taktshang.
King Jigme Wangchuck ordered the entire population of Tsento village to rebuild the four temples of Taktshang as they did not help in controlling the fire. The Drugyal Dzongpon Jangsarp built the Shama gompa. The lady who was responsible for the fire was ordered to rebuild the Zangdopelri Monastery. Ugyen Tsemo was rebuilt by the Taktshang Lama Khagorp, which was rebuilt again in 1954 on the order of the Queen Mother Ashi Phuntsho Choden by Je Khenpo Tenzin Dendup and Phub Dorji. 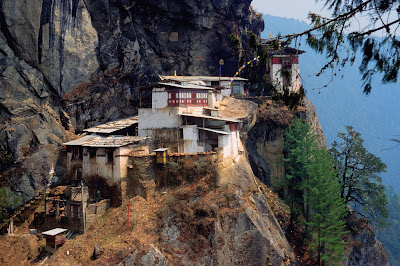 ‪On Sunday night 19, April 1998, a huge fire, probably caused by butter lamp destroyed the temple almost completely. The government undertook the reconstruction in 2000 with funds also received from outside donors. The monastery was recreated to its original splendor. There are shrines or temples like Druphu Nye, Guru Sung Jon mai, Kunrey (assembly hall), Chorten temple, Guru Tshengyad temple, Drolo, Namsey, Tshepamed, Naypoi and Marmi Dagsum temple.
The main event at Takstang is a weeklong ritual in the 5th month, dedicated to Tshepamed (Amitabah), as introduced by Zhabdrung in 1645. 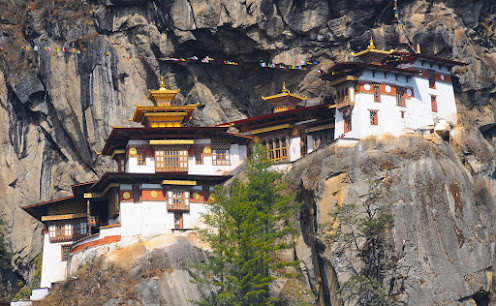 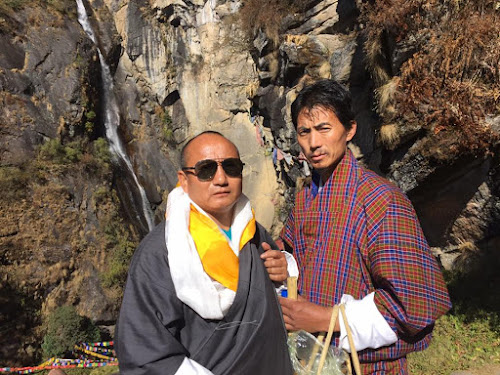 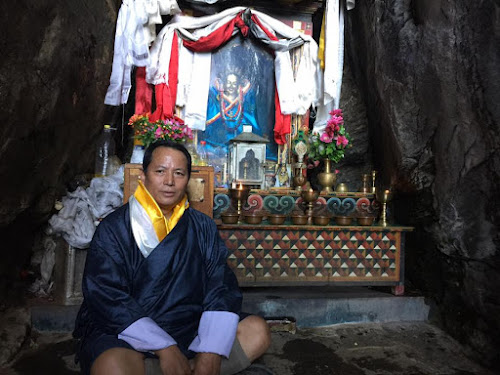