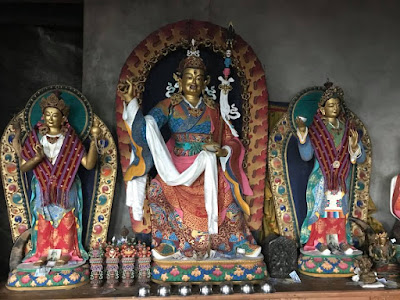 (Ugyen Dorje Gur with Khandro Yeshey Tshogyal and Khandro Manderawa)
Bay Yul Langdra one of the most sacred Guru Rinpoche’s Nye in the country was one of my top lists to visit. Happily on 18th February 2018 I have accomplished my mission. 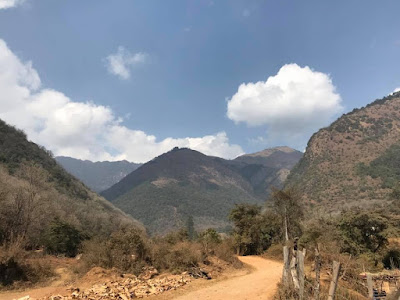 (The road to Bey Langdra Ney)
late from Wangdue around 12:30 pm, I proceeded to the place of great reverence with my travelling small Guru Rinpoche statue. My statue made a visit to Paro Taktsang and all Buddha’s holy sites in India. His Holiness Kathok Situ Rinpoche consecrated it recently along with the consecration of Karma Feeds Plant in Pasakha. 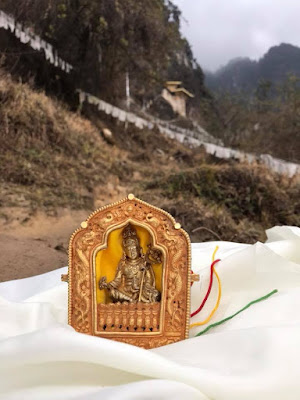 (My traveling Guru Statue connected with  Bay Langdra Ney)
Bey Yul Langdra lies at the end of a clustered valley, 22 kilometers from Chuzzomsa (Wangdue Trashigang Highway) in Wangduephordang. The whole stretch of road is very rough. At the end of the feeder road, Kathok Yoesel Samtenling Monastery (ཀཿཐོག་འོད་གསལ་བསམ་གཏན་གླིང་དགོན་སྡེ) is located. The monastery is under the care of His Holiness Khatok Situ Rinpoche. 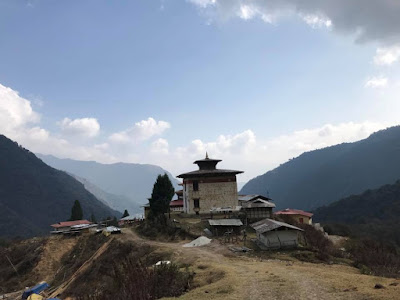 (Kathok Yoesel Samtenling Monastery (ཀཿཐོག་འོད་གསལ་བསམ་གཏན་གླིང་དགོན་སྡེ)
Before reaching at Kathok Yoesel Samtenling Monastery there is a huge cypress tree by the site of the road believed to have grown from the walking stick of Guru Rinpoche. The tree is also believed to house relics and confer blessings equivalent to five monasteries. Every year the tree is revered on the 15th day of 8th month of the Bhutanese calendar, a day known as ‘Tsenden tsechu’ in homage to Guru Rinpoche. It is said that people of Bey Langdra celebrate the day with fun fare over a strict vegetarian diet. I made round, offered Nyenda and picked few leaves. 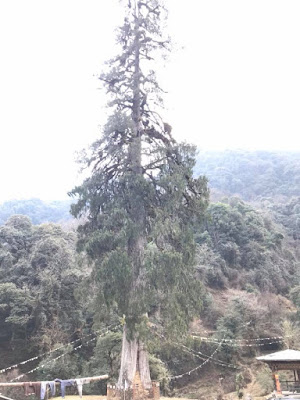 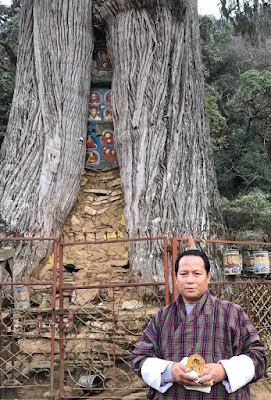 (At the base of holy cypress tree)
From the monastery it takes around one and half hour’s steep heart punishing hike up to the Monastery. Bit tougher than hiking Paro Taktsang. I mean for me. It is located at 2500 m. 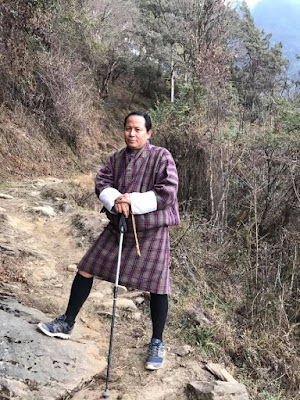 Nevertheless the following statement encourages every devotee to climb up through declivity Rocky Mountains and reach the sacred Nye:
Guru Rinpoche instructed to Terton Dorje Lingpa on 10th day of the 8th month during his retreat at Bay Yul Langdra that,
⁃ If one merely sees Bey Yul Langdra, one will be freed from samsara.
⁃ If one visits it, all defilements will be purified.
⁃ If one practices Dharma there, one will find spiritual fulfillment and realize all the Yidam practices.
⁃ If one makes offerings here, all aspirations for all lifetimes will be fulfilled.
Slowly negotiating the steep climb I accompanied by my brother move through dense forest time and again looking at the Bay Langdra Monastery that is seen up in the rock. On the way one can see many small-concealed huts where monks undergoing three years solitary retreat under the guidance of His Holiness Kathok Situ Rinpoche. 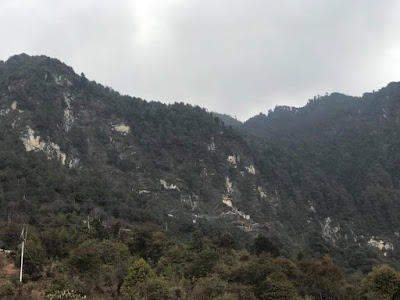 Finally we grasped at the foot of the Monastery. As we step up the staircase a group of monkey run and jump misidentifying us to be monkeys chaser. It was a bit frightful looking at the way they wildly dispersed away. Am worried that Lam may be outstation. As we move up the staircase we found all houses locked that further worried us. But I am extremely happy to find finally the main Monastery without lock. We entered and the blessings began. 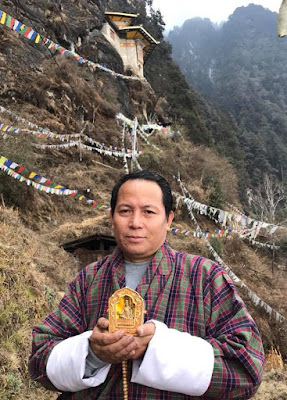 The Monastery is a three storied building built hanging on the cliff using Guru Rinpoche’s main meditation cave as its one of the wall. The basement houses Guru Rinpoche’s statue. The first floor was installed with Chenrizig in Yidam position (First of its kind in the country), five tertons, Ugyen Dorje Gur with Khandro Yeshey Tshogyal and Khandro Manderawa. All this statues was made based on the narration of Terton Dorje Lingpa. We can also see statue of Zhabdrung Ngawang Namgyal. 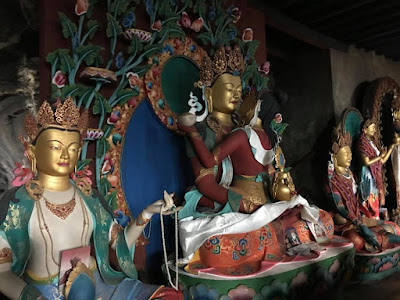 (Chenrizig Statue first of it kind in Bhutan) 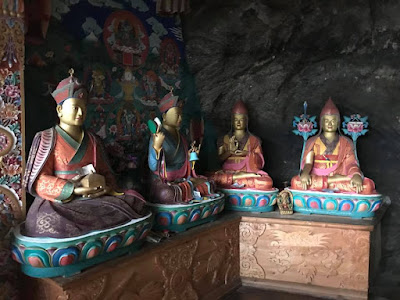 (The 4 tertons that visited Bay Langdra) 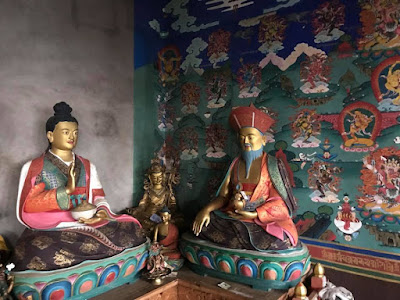 (Terton Sherab Mebar and Zhabdrung Ngawang Namgyal)
The top floor houses a Sangay Yopami statue. We prayed, prostrated and received blessing from all the statues. Received Sho and got 13. Bay Langdra Guru Sho is 11 and Langdra deity is 7. 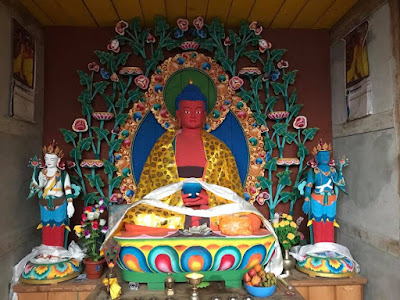 (Sangay Youpaymey)
I requested Lam to explain the significance of the Bay Langdra Ney, which he gladly agreed.
The Lam explained “Bey Langdra Nye evolved from nyeyeg (tantric mythology) as Guru Rinpoche chose to visit the place to envision some hidden treasures for propagation of Buddhism in future”. 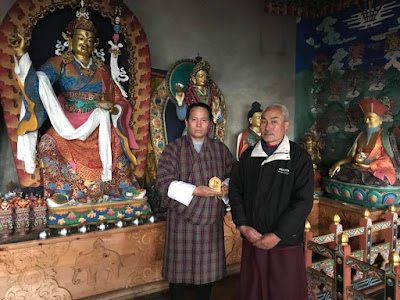 (With Bay Langdra Lam)
According to sacred texts, Guru Rinpoche returned from Zangdokpalri for a seven-day sojourn in Bey Langdra. This is the exact place where Guru Rinpoche meditated taking layman’s look, he said. On his arrival, Terdak Langdrapa, a local deity manifested himself into a wild Red Bull and attacked Guru Rinpoche. At the spec of second Guru Rinpoche from a layman immediately manifested to Urgyen Dorje Gur and cut the red bull into two pieces. One part of the cut piece and a bull tongue are seen at the cave. The lam said the other part is located in another place. Later on reacting to the merci pleading of the deity Guru Rinpoche appointed him as the protector of the treasure-teachings and named the site as Langdra Nye. The Nye is also known as the holy site of the red bull. 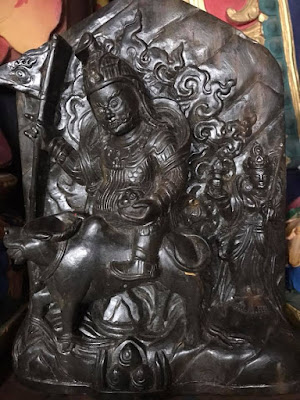 (Langdra bull)
This highly blissful cave wall is the key to the "hidden" reference in the monastery's name ('bey'). Lam took us behind the altar and shown us the main key of the Landra Nye. The black cliff face (dra means rock, as in Bey-lang-dra) has a round wedge inserted impression believed to be a sealed chamber in which are sacred terma--treasures hidden by Guru Rinpoche.

The Lam explained that Guru Rinpoche has hidden terdrom that possess Guru Rinpoche's sixty different types of concealed Dharma treasures known as Ters. This form the inner most sanctum of Langdra nye. It is believed that this Ters are destined to be discovered later by Tertons (treasure discoverers). Ters are discovered as per holy timing fixed by Guru Rinpoche depending on the need of additional Buddhist teachings. 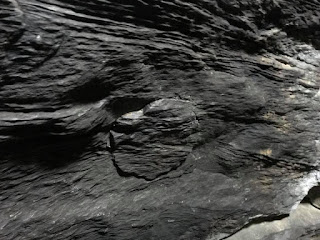 (The main Terdrom Key is the Key Hole to 60 numbers of sacred relics hidden behind this rock face. Situated at the very place where Guru Meditated for seven days to subdue the devilish deity Lang dragpa)

On the cliff face lam has shown us many signs, Path route to heaven, Path route to hell. Guru Rinpoche’s right foot print on a rock, divine sword, genitalia of a khandro Yeshey Tshogyal, foot prints of 100,000 dakinis. Outside the monastery on the other side there is long life vase firmly located from where holy water in droplet falls down. It is believed that if you take this holy water with great reverence, you will live 100 years. I got a bottle of this holy water. 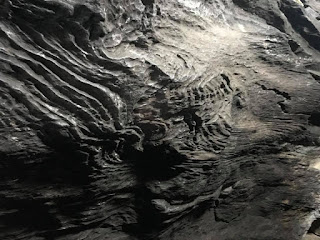 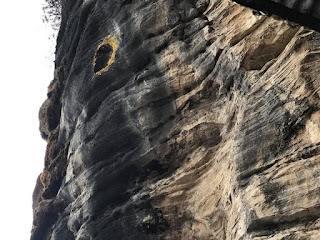 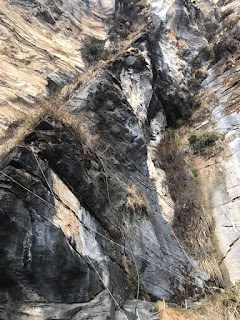 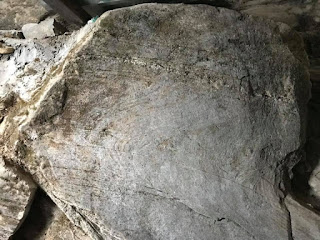 (Cut piece of a bull) 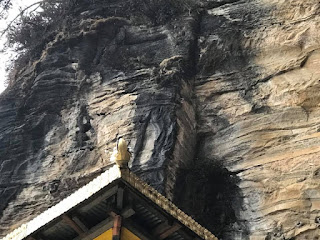 (The flaming sword above the monastery)
Guru Rimpoche left this solid dagger  after he subdued the Langdrapa by cutting into many pieces with this dagger. 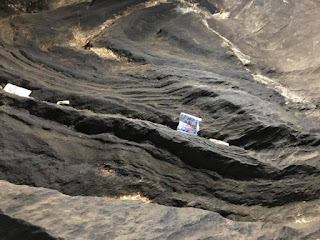 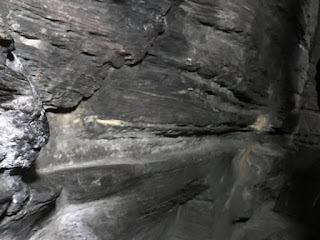 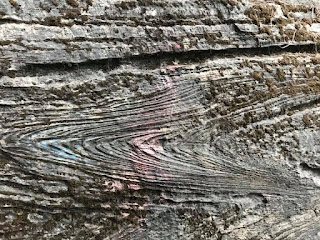 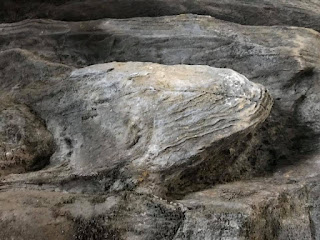 (Tongue of  a bull)
The Lama explained that Terton Pema Lingpa is believed to have visited the nye.
According to scared text, the lama explained that Kunkhyen Longchen Rabjampa visited Bey Langdra in 1356 followed by his son Tersay Drakpo Ozer.
Later in Shar Kunzaling, the seat of Kunkhen Longchen Rabjampa, Terdak Langdrakpa instructed Terton Dorje Lingpa to visit Bey Langdra. After visiting the place and staying there for seven days, Terton Dorje Lingpa was disappointed after finding no spiritual indications. However, when just about to leave, a Dakini appeared before him and instructed him to look at the cliff. The cliff is located below the monastery.

On the cliff, he saw Guru Rinpoche as an eight-year-old boy emanating from a rainbow. The Guru thus instructed him: “My son, do not leave. You are the destined treasure revealer.” The Terton then entered into a retreat. On the 10th day of the eighth month in retreat, the Guru again appeared to him.
The Guru instructed him that, if one merely sees Bey Langdra, one would be freed from samsara. If one visits it, all defilements will be purified. If one practices Dharma there, one will find spiritual fulfillment and realize all the Yidam practices. If one makes offerings here, all aspirations for all lifetimes will be fulfilled. 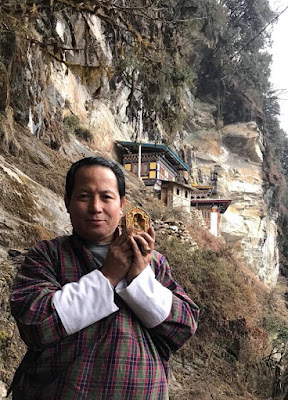 (At Terton Dorjee Lingpa’s Cave where he met Guru Rinpoche and took out TER (Holy Scriptures )
The Lam explained despite Guru Rinpoche and pointing at the series of Terton statues many great Tertons like Pema Lingpa and Sherab Mebar consecrating Bey Langdra, it remained hidden even to we Bhutanese for many centuries. 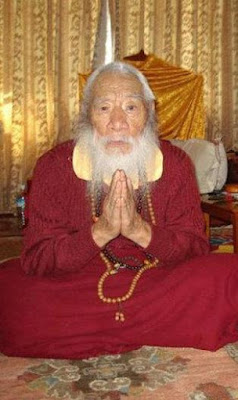 On Chatral Rinpoche’s instructions, a retreat center named Drubdra Ozer Samtenling was constructed at the foot of the valley and is now the seat of His Holiness Kathok Situ Rinpoche. We visited the monastery in the night literally prostrating in the dark, as there was no light at that time. The Monastery is of two storied. The lower houses Guru Rinpoche’s Statue and the upper Kuentuzanpo Statue. 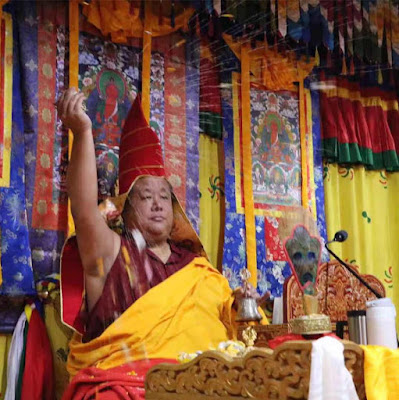 (His Holiness Kathok Situ Rinpoche)
Bey Landra nye is considered to be sacred and at par with Goen Tshaphu in Punakha, Kurjee in Bumthang, Taktshang in Paro , and Singye Dzong in Lhuntse.

Our country is truly blessed by Ugyen Guru Rinpoche.
VISIT BEY LANGDRA AND CONNECT YOURSELF WITH GURU RINPOCHE.