Know how Lhasang Thruelsel is performed? 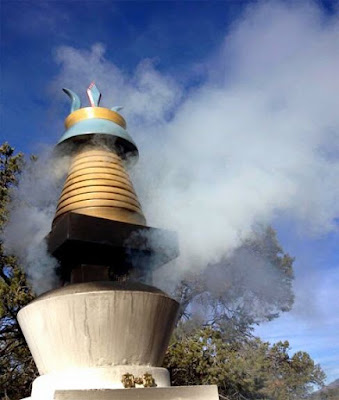 The Lhasang (purification offering)  is one of the most common rituals performed in Bhutan.

The short ritual usually performed in the early morning calls upon all the good spirits and well-intentioned deities, as well as buddhas, bodhisattvas, protectors, and deceased teachers. Unlike many other rituals which is performed for the specific purposes, Lhasang served as multiple offering to many deities and bodhisattvas.

Lhasang is conducted for a variety of spiritual as well as secular purposes and by different people.

A lay person in time of duress, a householder on behalf of the entire family, at new new born house to remove defilement three days after baby delivery, before venturing to long journey, before and after construction of a building, blessing of new vehicle, or blessing of a special object.

The lhasang involves purification of negative forces by fire and juniper smoke and is empowering by attracting higher beings of samsara and the enlightened ones.

The lhasang concludes with a restatement of the purpose and with a particularly powerful mantra, such as:

This mantra represents one of the oldest statements of Buddha Shakyamuni; it translates as: “Whatever phenomena (dharmas) arise from a cause, the cause of them the Tathagata has taught, as well as the cessation thereof. Just so has the great ascetic declared.”

The rituals are often accompanied by very auspicious synchronicities involving natural phenomena (sun, clouds, rainbow, appearance of animals, etc). This is considered to be confirmation of the success of the ritual.

The lhasang has several stages. First a fire is made using juniper and cedar branches – glowing embers are preferable top open flames. This is followed by an invocation inviting higher being to attend. On the general level, the lhasang might call upon the three jewels (Buddha, dharma, and sangha), the three bases of Buddhist practice (gurus, yidams, and dakinis), and whatever gods and sages there might be – protectors, the three most important bodhisattvas (Avalokiteshvara, Manjushri, and Vajrapani), Guru Rinpoche, and other Buddhist lineage figures.

This is followed by offerings that can be material (grains, food, alcohol) or imagined.
Then supplication for assistance is issued to the beings who have been gathered and with whom contact has been established through the offerings.

One first asks for purification and protection against obstacles and negativity, which can be inner (disease, emotional problems, resistance, and other impediments to successful dharma practice) or outer (curses, lawsuits, warfare, failing crops, plague, and famine). 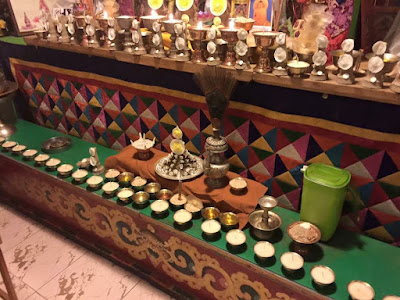 The following request is for empowerment, health, material prosperity, and well-being. On the transmudane level, one asks for successful dharma practice, insight, compassion, and close connection with one’s lineage. Higher beings are seen as participating in the overall scheme of things and capable of influencing the course of events.

The supplication is followed by repetition of various mantras, often in Sanskrit which, as the original language of Buddhism, is considered particularly powerful.

In Vajrayana, the mantras embody the essence of particular buddhas, protectors, or departed gurus. At this point, participants circumambulate the fire in a clockwise fashion, purifying themselves and various objects (clothes, brushes, sculpting tools, etc.) by juniper smoke. It does not include ritual implements, which are sacred already. A thrusel is performed carrying a mirror and a white scarf.

After Lhasang, one feel a sense of happiness as the house/room/area is totally cleansed of all defilement.

This is what is done in that one hour ceremony. Hope you all are aware of performing Lhasang now.
By Phub Dorji Wang at January 28, 2019
Email ThisBlogThis!Share to TwitterShare to FacebookShare to Pinterest
Newer Post Older Post Home