The Origin of “Jibi Powo”, the dance of the prade 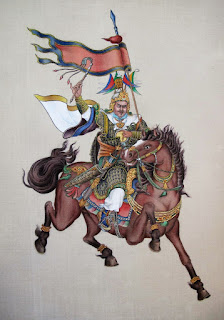 Jibi Powo is a must dance performed during Bhutanese parade unique to its context and culture. It exhibits physical deftness and mental awareness inspired by Buddhism’s union of method and wisdom. The tradition has survived through mid-19th century to the present day. It is still awe-inspiring to watch four fleet-footed powos (heroes) flanking a guest through a crowded gathering at a public event and an official ceremony.

Bhutanese experts suggest that the parade was inspired by the legend of Ling Gesar, the warrior king who fought the enemies of Hor. King Gesar was believed to be the embodiment of the trinity known as Rigsum Gonpo: body emanation of Manjushri (wisdom), the speech emanation of Avaloketeshvara (compassion) and the mind emanation of Vajrapani (adamantine). Gesar performed a heroic dance when he sensed that his army was fighting a losing battle, which beguiled and overpowered the enemies into a voluntary defeat. Iconographically, Gesar is appareled as a fearless warrior on the horseback wearing a crown and a sword tucked across his waist. 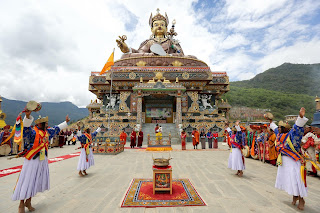 There are two oral accounts of the origin of the dance in Bhutan. The male resident deity Chundu of Haa in western Bhutan worshiped Gesar. The 16th Paro Penlop (governor) Tshultrim Namgyal, popularly known as Ponlop Agay Haap, was believed to be an offspring of Chundu. Unrivalled as a statesman and strategist, he called a long truce during an armed battle between the Bhutanese and Tibetan.

Meanwhile, the versatile ponlop composed and performed the charismatic dance every day to pacify his enemies. According to senior locals, the dance was staged with dexterity, exquisite costume and lyrical invocation of warrior god Gesar. The dance made opposing parties drop their grudges in a favorable situation. In an unavoidable showdown, the dancers would slay the unsuspecting enemies with their swords tucked across the back of the waist. 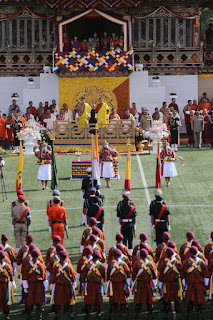 Another account goes that Zhabdrung Jigme Norbu, the 4th mind incarnation of Zhabdrung Ngawang Namgyal, who was born in Drametse, Mongar in 1831, was a potential candidate for the 39th Druk Desi (regent) following the death of former Desi Wangchuk Gyalpo in 1850. Sensing danger to Jigme Norbu’s life during the investiture ceremony, Ponlop Haap, an ally of Desi Jigme Namgyel (1824-1881), staged the dance to escort Jigme Norbu out of Tashichhodzong in Thimphu.

An oral account affirms how both the ponlop and Jigme Norbu performed the dance and escaped the scene unharmed.  Later, Jibi Powo was recognized for its skillful means and wisdom, and performed as an official parade to receive His Majesty the King, His Holiness the Je Khenpo and dignitaries during ceremonies and public events.

The performers sing an invocation and dance simultaneously in a swift and rigorous choreography. The dance is performed in four choreographic modes and lyrical transitions. The crude translations of the lyrics go: 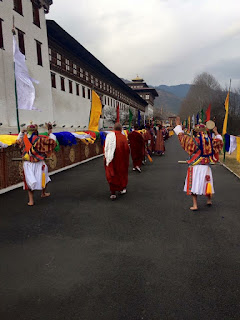 ENTRY: PEACEFUL
Upon the open and auspicious lotus-like ground
The auspicious waterfall cascades like a crystal nectar
The charismatic personality is the accomplished fearless hero
The superior tree is the faultless cypress
The bird of heaven flock to partake.

INVOCATION: SEMI WRATHFUL
The dancers extol Guru Rinpoche and his physical attributes:
The Lama seated on the throne is the peerless
Lotus-born teacher of Orgyen
In his hand is the vase of elixir
His head is adorned with the lotus hat.

CRESCENDO: WRATHFUL
The bird of heaven is flapping wings to take flight
It is zestfully clucking for grains
Its parched throat thirsts for cool fresh water
Perched upon the treetop, it could see the zenith of heaven
For all the heavenly blessings, it prefers to remain on the treetop.

EXIT: PEACEFUL
The dancers take leave by receiving blessings from spiritual teachers and bowing to the guest of honour.

The costume, adornments, implements and weaponry are intricately cloaked. The costume is woven from resilient materials. Metallic adornments are infused with potent symbolism. Weaponry is crafted to inspire awe and fear.

2. Dar Nay Nga or five multi-coloured silk scarves crisscrossing the upper body to psycho-spiritually empower the performers. The softness and sensitivity of the scarves symbolize compassion and defiance.

3. Khabshub: a pouch hung by the waist to store sewing needle and thread

4. Phorshub: a pouch hung by the waist to keep flint and matches

7. A sword tucked across the waist hints at a warrior faced with a mortal challenge. When the sword is worn suspended from the waist, the weapon becomes a heroic decoration.

8. A damaru (hand-held double-sided drum) in the right hand is played to invoke blessings of the female wisdom.

9. A long white skirt worn outside the gho, the national dress of Bhutan, symbolizes the ritual garb of spell-binders (Ngagpa).