Tashi Zegye (བཀྲ་ཤིས་རྫས་བརྒྱད་) are eight auspicious items which are associated with the different events in the life of the historical Buddha. They were offered to the Buddha at different points of his life and blessed by him as sacred substances which bring about auspiciousness.

Like the eight auspicious signs, the eight substances also have a pre-Buddhist prototype but in Buddhism, they are sometimes seen as symbols of the Noble Eightfold Path.

In the Vajrayāna tradition, they are personified as eight offering goddesses.

The eight substances are offered to generate auspiciousness during important events.

The detail are given below: 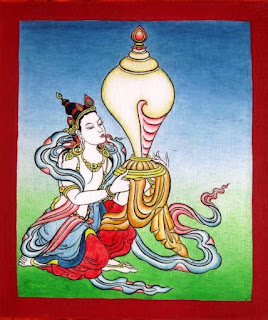 After the Buddha experienced the profound and blissful nature of enlightenment, he remained reclusive in the forest for seven weeks fearing that no one would be able to understand and share his experience. The celestial king Indra offered the Buddha a white conch shell spiraling clockwise and asked him to share his experience and teach the dharma. The Buddha blessed the conch shell as a symbol of the resounding words of dharma. 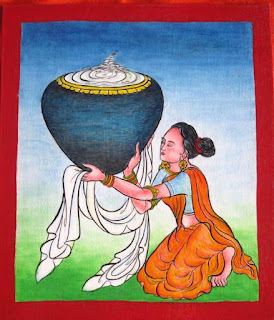 When the Buddha stopped six years of mortification, the cowherd girl Sujata offered him the condensed yogurt which revived the Buddha’s physical health and splendour. The Buddha blessed yogurt as a sacred nutritious substance. He used this to avoid the extreme of physical mortification, just as he avoided self-indulgence by renouncing his palace life. It is one of the “three white food” mentioned in Indian culture alongside milk and ghee. 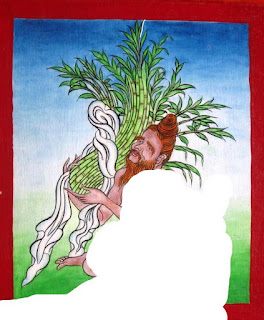 As the Buddha approached the Bodhi tree to sit under it in meditation, the grass cutter Maṅgala offered him durva grass, which is considered special in Indian culture. The Buddha sat on the grass and practised meditation through which he reached enlightenment.
The durva grass, which some identify with kusha, is blessed as a sacred substance and symbolizes the adamantine seat and stability.
The kusha grass is used for sleeping on in some tantric rituals.

The bilva or bael fruit has a very sacred place even in the pre-Buddhist Indian culture for its medicinal value and spiritual origin in Vedic mythology. The celestial overlord Brahma is said to have offered the fruit to the Buddha. In some accounts, a tree goddess is said to have offered this fruit to the Buddha when he was meditating under a tree as a young prince. The fruit was blessed by the Buddha as an auspicious substance. 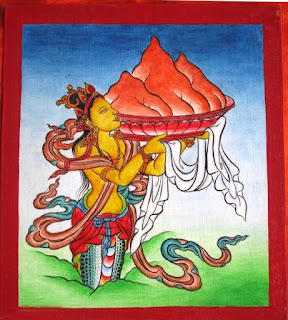 The vermillion or sindhura powder of cinnabar or minium having orange-red colour is widely used in ancient Indian culture. It represents love and passion and is a substance for magnetizing activities. The Brahmin named Jyotisharaja is said to have offered the vermillion to the Buddha and the Buddha blessed it as a sacred substance. 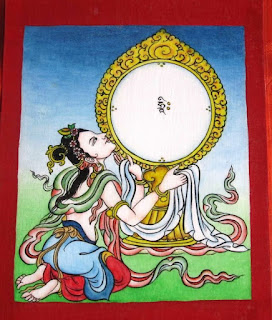 Being an open and pure object which reflects all things indifferently, the mirror represents the open, luminous and empty nature of the mind in which all empirical experiences are reflected naturally without distortion. The offering goddess Prabhavati is said to have offered a mirror to the Buddha who blessed it as a sacred symbol of the enlightened mind.

Giwang or bezoar of animals, particularly of an elephant, is considered to have a high medicinal value to cure many diseases and poisoning. The elephant Sasrung or Norkyong is said to have offered bezoar to the Buddha who blessed it as a sacred substance with a power to heal and stimulate supramundane power. 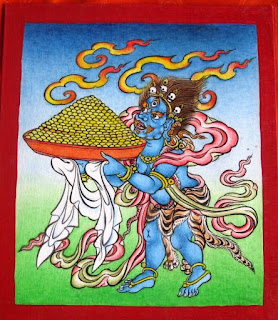 Mustard seeds in addition to being an important household item particularly for producing oil is known for their sacred power to alleviate problems and annihilate evil forces. Vajrapani is said to have offered the mustard seeds to the Buddha, who blessed it as a sacred substance to get rid of negative energies and exorcize evil forces. It is widely used in tantric rituals of exorcism and subjugation.
Posted by Phub Dorji Wang at December 08, 2018
Email ThisBlogThis!Share to TwitterShare to FacebookShare to Pinterest
Newer Post Older Post Home