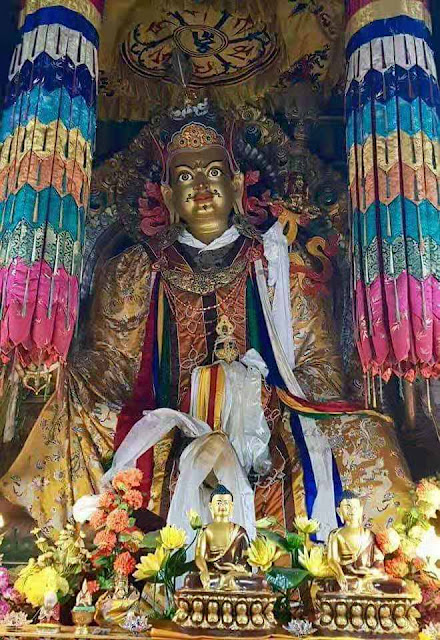 As we are fully protected by Guru Rinpoche, it is very important to know his various representations.

Attributes of Guru Rinpoche in the form known as ‘Prevailing over all that Appears and Exists’ (1).

1. Prevailing over all that Appears and Exists’ (Nangsi Zilnön) a form of Guru Rinpoche. As he understands the nature of everything that appears, so he is naturally the master of all situations.

2. Skilful means (ཐབས) — compassion, which is the counterpart of the wisdom (ཤེས་རབ) of emptiness, and all bodhisattva activity motivated by compassion. The first five paramitas (ཕ་རོལ་ཏུ་ཕྱིན་པ) are skilful means, the sixth is wisdom.

3. Shravaka (ཉན་ཐོས) — a follower of the basic vehicle who strives to attain the level of an arhat.

4. Bodhisattva (བྱང་ཆུབ་སེམས་དཔའ) — someone who has aroused bodhichitta, the compassionate wish to attain enlightenment for the benefit of all beings and also wishes to bring them to that state.

5. Vajra (རྡོ་རྗེ) — a ritual sceptre symbolizing compassion and skilful means, and also a symbol of indestructibility. In tantric rituals the vajra is the necessary counterpart of the bell, which symbolizes the wisdom of emptiness.

6. The resultant vehicle or ‘fruitional vehicle’ refers to the Tantrayana (Mantrayana or Vajrayana). It is called ‘fruitional’ or ‘resultant’, because the path is no longer based on establishing the cause (as in the causal vehicle), but identifying directly with the fruition—the fundamentally pure essence of mind, or buddha nature, which has been present within our minds from the very beginning, but has been temporarily obscured.

7. Vidyadhara with power over life (tsewang rigdzin) one of the four vidyadhara levels. This stage is reached after not only the practitioner's mind has matured into the dharmakaya, but one also gains the power to purify the ordinary body and transform it into a subtle body, which is immortal.

9. Three kayas (སྐུ་གསུམ་): dharmakaya, sambhogakaya and nirmanakaya.
The three 'bodies' of a buddha. They relate not only to the truth in us, as three aspects of the true nature of mind, but to the truth in everything. Everything we perceive around us is nirmanakaya; its nature, light or energy is sambhogakaya; and its inherent truth, the dharmakaya.

10. Samsara (འཁོར་བ) is the cycle of conditioned existence, birth and death, which is characterized by suffering and in which one is continually reborn until attaining nirvana.

11. Nirvana (མྱ་ངན་ལས་འདས་པ) - literally ‘extinguished’ in Sanskrit and ‘beyond suffering’ in Tibetan; enlightenment itself. It is the state of peace that results from cessation, the total pacification of all suffering and its causes.

12. Khatvanga ( ཁ་ཊྭཱཾ་ག་ kha TwAM ga) — a trident with symbolic elements. The crossed vajra represents the earth that forms the base of the mandala of Mount Meru. The vase with its four leaf shaped pendants represents Mt Meru and its four faces. The freshly severed head above it (red in colour) represents the six heavens of the desire realm (kamaloka) gods. The decaying severed head above that (blue or green in colour) represents the eighteen heavens of the form realm (rupaloka). The decaying head indicates the death of desire in the gods that abide in these heavens. The fleshless skull above that (white in colour) represents the four heavens of the formless realm (arupaloka). The absence of flesh indicates the death of both desire and hatred in these gods. The trident represents the Three Jewels, and the Buddhas of past, present, and future. The hanging damaru and bell represent the union of skilful means and wisdom. The triple-valance pendant symbolises the victory banner placed at the peak of Mount Sumeru. The hanging white scarf tied around the vase represents the mountain and great salt ocean that surround Mount Sumeru.