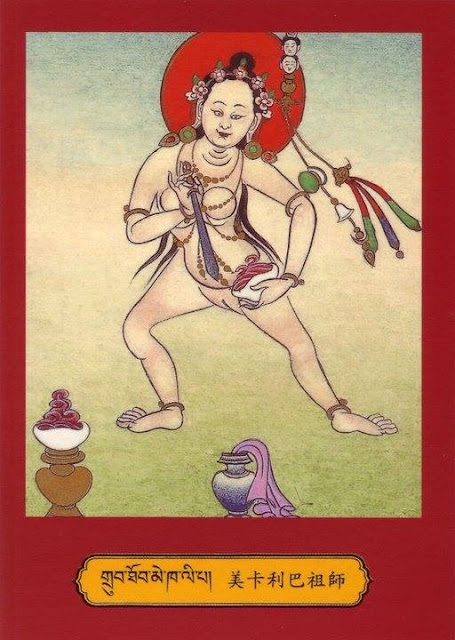 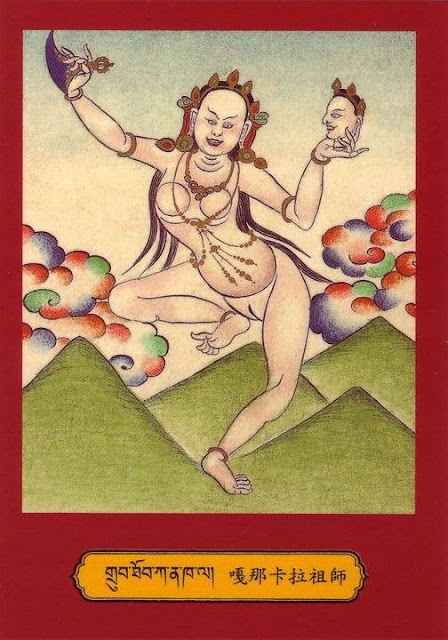 They are both known as the headless sisters. In Devikotta, an elderly widower was burdened with 2 unmarried daughters. It wasn’t that bad, but the 2 girls were infamous for their playfulness and mischievous tricks. Eventually the girls were married into a fisherman’s family, and miserable their husbands were.

Finally, the younger one suggested that they run away, but Mekhala, for the first time spoke wisely to her sister, “You know, I suspect that we deserve what we get. We bring it on ourselves. I hate to tell you this, but we’re going to have to stay – it isn’t going to be different anywhere else because we take ourselves with us.”

At that very moment, the guru Krsnacarya passed by with 700 dakas and dakinis in attendance. Impulsively, the sisters threw themselves at his feet and begged for his instruction. Krsna gave them initiation and instructed them in the Vajra Varahi path that unites vision and action.

The 2 sisters meditated diligently for 12 years and successfully attained their goal. They then decided to visit their guru and seek further instruction. When they found him, they humbly prostrated themselves and walked about him in reverential circles. The guru received them kindly, but it was quite obvious he did not know who they were. The sisters then said they were the 2 unhappy married sisters that he initiated 12 years ago.

The guru then bellowed, “ if I gave you initiation, then why haven’t you brought me any offerings!” In reply, the sisters said they were at his service and asked what the guru would like. Krsnacarya said “your heads!”

Without any hesitation, the sisters pulled a sword of pure awareness and decapitated themselves and as they made their offering to their guru, the severed heads sang a beautiful song for their guru. Krsnacarya then replaced their heads perfectly and the sisters came to be known as the Headless Yoginis.

In gratitude, the sisters knelt before their guru and touched his feet in reverence. No sooner had they done so than they attained Mahamudra-siddhi. For many years thereafter they worked selflessly for the benefit of all sentient beings and were assumed bodily into the Paradise of the Dakinis.
By Phub Dorji Wang at February 17, 2020
Email ThisBlogThis!Share to TwitterShare to FacebookShare to Pinterest
Newer Post Older Post Home