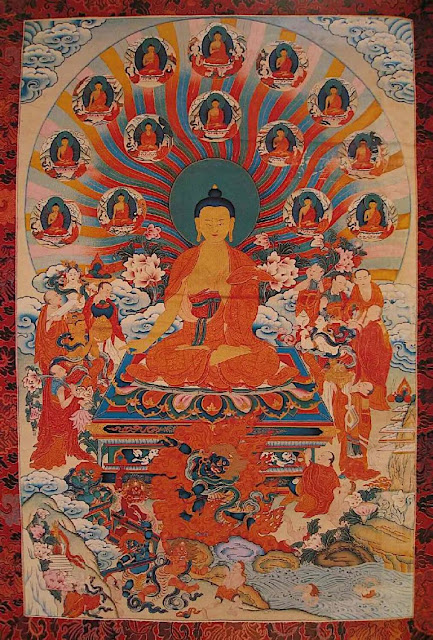 The first fifteen-day of the first Lunar month beginning today the 24th February 2020 is regarded as the most auspicious day for Buddhist all over the world.  It is Chotrul Düchen (Wyl. cho 'phrul dus chen), the 'Festival of Miracles'. It occurs on the full moon (the fifteenth day) of the first Lunar month, which is called Bumgyur Dawa.

The first fifteen days of the year celebrate the fifteen days on which, in order to increase the merit and the devotion of future disciples, Buddha displayed a different miracles. The Buddha displayed the miracles for his disciples so as to increase their devotion.
During these 15 days, it is believed that the effects of positive or negative actions are multiplied ten million times.

So friends take this opportunity to pray for the sentient beings. 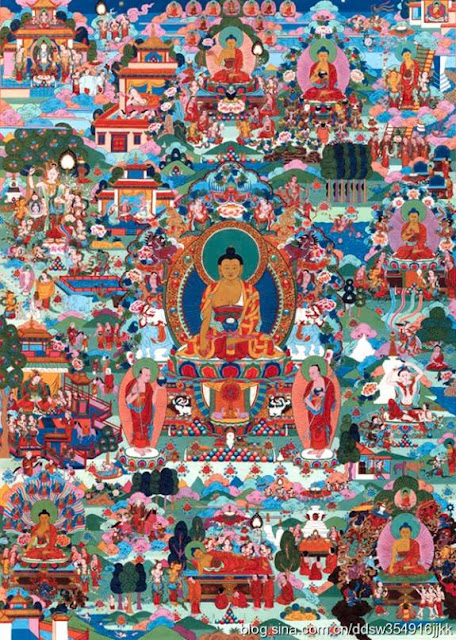 The leaders of India's six main philosophical schools had challenged the Buddha to a contest of miraculous powers many times as he wandered through the surrounding kingdoms.
Six evils, heretic teachers led by Purnakasyapa had become mad with resentment and jealousy against the Buddha, and tried to engage him in a contest of miraculous powers, which Mara had persuaded them they could win. King Bimbisara laughed them out of court when they petitioned him, but they persisted, and finally he went to request the Buddha's participation.
The Buddha agreed, but stipulated that he would set the time of the contest. A teaching throne was set up in a large arena at Rajagrha, but shortly before the proposed contest, the Buddha and all his followers departed for Vaisali. Seeing this as an admission of defeat, the six heretic teachers were elated, and rushed after the Buddha, with their ninety thousand followers, and after them, king Bimbisara and his entourage. The heretics urged the Licchavi king to stage the contest there, and the Buddha again accepted, but said he would set the time.
The Buddha then moved on, from one city to the next; each time giving the same answer, and gathering a new following, until they came to Shravasti.
The heretics soon arrived, and remonstrate with king Prasenajit not to allow any further postponement, and the Buddha assented that the time had now come. Buddha was fifty-seven years old when the conditions were most auspicious to accept this challenge.
King Prasenajit built a hall in Shravasti especially for the event; in it seven thrones were erected. On the new moon of the first month of spring (what is now known as losar, the beginning of the Tibetan new year), the six other teachers took their seats and Shakyamuni came to his flying through the air. He was honored with extensive offerings. He then sent forth fire and water from his body and the hall was destroyed and reformed as a transparent palace.
Before the kings of all the capitals he had passed through, the six heretics and their followers, and a huge assembly of gods and humans, he performed inconceivable miracles for the next fifteen days.
1.   On the first day of spring, Buddha went to the field that had been prepared for him and sat upon the lion throne before the multitude. After King Prasenajit’s great offerings, the Tathagata took a toothpick and placed it in the ground. It grew at once into a marvelous tree. On its branches, which extended for kilometers, grew beautiful leaves, flowers, fruit, and jewels of every kind. The multi-colored light emanating from the jewels was as brilliant as the light of the sun and moon combined. When the branches of the tree rustled in the wind, the sounds of the teaching were heard. Then Buddha himself spoke to the multitude. Many of the people listening progressed greatly – some attained arhatship and millions ripened the seeds for rebirth in the high states of humans or gods. 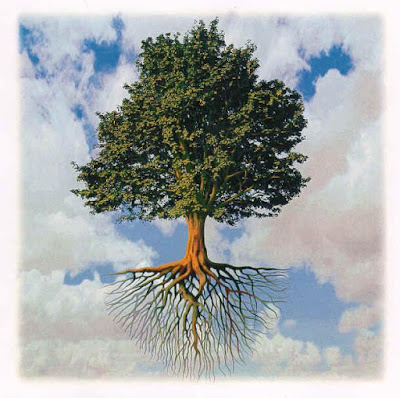 2.   On the second day of spring, King Udrayana made great offerings to Buddha. The Tathagata then turned his head right and left, and on either side of the lion throne a jewel mountain emerged. On each mountain flowed a magical spring whose water had eight different tastes. One mountain was covered with lush grass to feed and satisfy animals, while the other was covered with special food to satisfy humans. Buddha then spoke the teaching according to each person’s ability, and many were freed. Some of those present generated the supreme bodhi–mind, and many established the inclination for rebirth as humans or gods.

3.   On the third day King Shun Tsin of War made offerings to the Tathagata. After eating, Buddha rinsed his mouth with water. On the ground where the water fell, a great lake formed which extended for three hundred kilometers. The water had eight tastes, and the bottom of the lake was covered with seven kinds of jewels. Great quantities of lotus flowers of every color grew on its surface, and their fragrance filled the air; by the rays of light extending from them in all directions, the people could see everywhere. When the people saw this, they were very happy, and when Buddha taught, some attained arhatship, some increased their Bodhi mind, and many others attained the seeds of rebirth in the worlds of humans or gods. 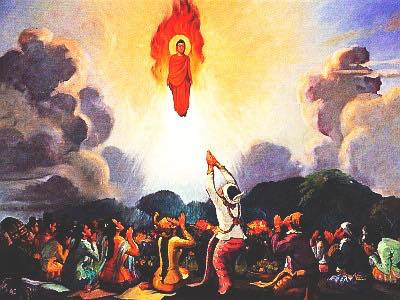 4.   On the fourth day King Indravarma prepared the offerings for Buddha. Buddha created a pool from which eight streams flowed outward in circular paths, and to which they returned. In the sound of the streams people heard the teachings of the five powers, the five strengths, the seven aspects of Bodhi-mind, the eightfold path, the three principles of the path to liberation, the six kinds of omniscience and the four immeasurable. From this teaching many attained understanding of the effects of Buddhahood and many attained rebirth in the high states of humans or gods. Hundreds of thousands increased their virtuous work.

5.   On the fifth day King Brahmadatta of Varanasi prepared various offerings for Buddha. From the Tathagata shone a golden light that filled the entire world. This light reached all living beings and purified the defilements of the three poisons: desire, hatred and ignorance. All beings became peaceful in body and mind, and those assembled rejoiced greatly. When Buddha spoke, many increased their Bodhi-mind, many planted seeds of rebirth as humans or gods, and a countless number increased their virtuous work. 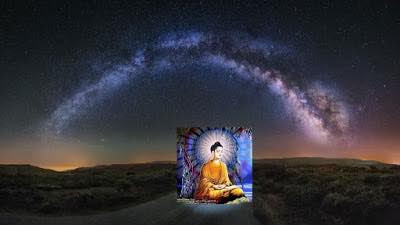 6.   On the sixth day the Licchavi people made offerings to Buddha. Buddha then enabled all who were there to see into each other’s minds and each one saw the others’ good and bad thoughts. All experienced great faith and praised the knowledge of Buddha. The Tathagata then taught the holy Dharma and many attained great understanding – some attained Bodhi-mind, some arhatship and an immeasurable number attained rebirth as humans and gods. 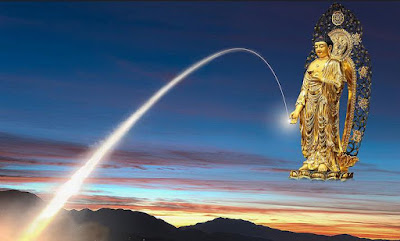 7.   On the seventh day, Buddha’s own clan, the Sakyas, made offerings to him. He blessed all the listeners so that they became great chakravartins (universal Kings that support the Dharma), each possessing seven magic jewels. Each ruled his own small country and had many respectful ministers. All were very happy with this and when Buddha spoke they had great faith. Having increased their Bodhi-mind, many attained arhatship and others sowed seeds of rebirth as humans or gods
8.   On the eighth day Indra invited Buddha and prepared a great lion throne. When the Tathagata was seated, Indra himself made offerings on Buddha’s left while Brahma made offerings on his right. They bowed down before him, while the people sat quietly. Buddha placed his right hand on the lion throne in the earth touching mudra, and there was a great sound of trumpeting elephants.
Five fierce demons came roaring forth and the thrones of the six teachers were destroyed. After the demons, Vajrapani came, with flames shooting from the point of his vajra. The six teachers were terrified and jumped into the water and disappeared. Their teachers having deserted them, the ninety thousand attendants took refuge in Buddha and asked to become fully ordained monks. Buddha welcomed them and the matted locks and beards that had marked them as disciples of the six teachers miraculously disappeared.
Buddha taught all of them according to their abilities to understand. Freeing themselves from the fetters of desire, hatred and ignorance, each attained arhatship. Then the Tathagata radiated eighty-four thousand rays of light from the pores of his body, so that the light filled the entire sky. On the point of each ray was a beautiful lotus, and on top of each lotus appeared a Buddha along with his attendants. Each Buddha was teaching the Tathagata’s doctrine. All felt joy at this sight, and their faith was greatly increased. Then Buddha spoke the holy Dharma and many increased their bodhi-mind, some attaining arhatship, and a countless number produced the inclination to take rebirth as humans or gods.
9.   On the ninth day Brahmaraja made offerings to Buddha. The Tathagata extended his body until it reached the highest heaven of Brahma. From these body rays of light shone in all directions, and from this great height he gave the teaching.
10.                 On the tenth day the four great kings who protect the Dharma invited Buddha to speak. Again he extended his body until it reached the height of samsara. Rays of light streamed from him, showing the teachings.
11.                 On the eleventh day the great patron Anathapindika made offerings to Buddha, who was seated upon the lion throne in meditation. Though the assembly could not see his form, his body radiated golden light, while in a great voice he expounded the teaching.
12.                 On the twelfth day the householder Tseta invited Buddha to speak. The Tathagata entered into the meditation of great love, and golden light radiated from his body, extending throughout the worlds. The rays of light cleared the three poisons from the minds of everyone and their compassion increased. They loved each other as a father and mother love their children, as a brother loves his sister.
13.                 On the thirteenth day King Shun Tsin made offerings to Buddha. The Tathagata sat on the lion throne and two rays of light, rising fifteen meters, radiated from his navel. On the point of each ray of light was a lotus, and on each lotus, a Buddha. From the navel of each Buddha extended two rays of light and upon each of which was a lotus with a Buddha, and so on, filling the worlds. All the Buddhas were expounding the teachings.
14.                 On the fourteenth day King Udrayana made offerings to Buddha. He strewed flowers in front of Buddha, and they changed into twelve hundred and fifty carriages made of precious jewels. Buddha taught the Dharma to beings throughout the worlds as a doctor healed the sick.
15.                 On the fifteenth and final day of the spring celebration, King Bimbisara brought gifts to Buddha. Buddha then told King Bimbisara to bring vessels for food and the vessels were miraculously filled with foods of a hundred different tastes. When the assembly ate them, their bodies and minds were completely satisfied. Buddha asked them, “Why is there such immeasurable misery in the world?”
By his blessing, even the eighteen kinds of demons realized that their misery was caused by deeds they had done themselves. They felt great faith in Buddha. As on all the previous days, those assembled attained great advancement. Some increased their Bodhi-mind, some attained arhatship, some attained the stage of no returning, many attained the seeds of rebirth as humans or gods and countless others increased their virtue. 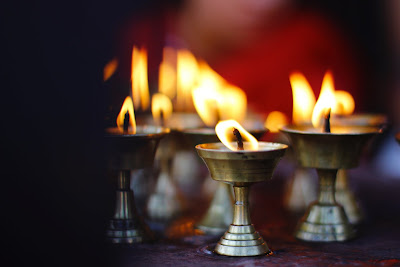 (This is the reason why we need to visit Sharavasti, U P, India where Buddha also spent 24 rainy seasons there). 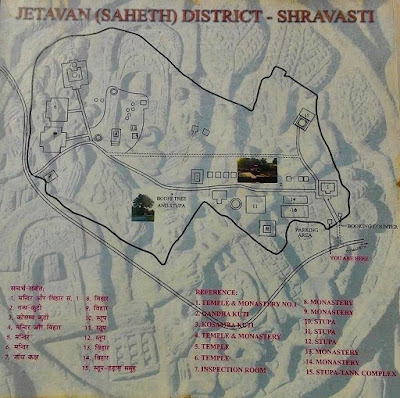