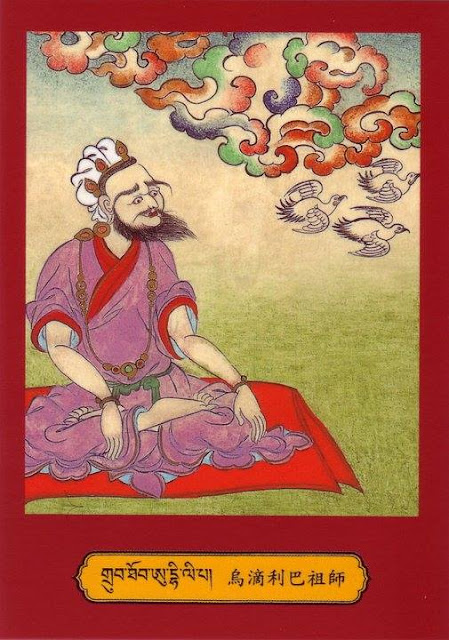 Udhilipa was a wealthy man from Devikotta who desired to fly after discovering masses of clouds in five colors and an infinite variety of shapes.

One day, the guru Karnaripa came to his door to beg for food. Udhilipa welcomed him and offered the best food his kitchen could provide.

Confessing his deepest desire, he asked the yogin if he could be taught to fly. The guru said there is a way, but it is a long and arduous one. After convincing the guru that he would follow the instructions to the letter, Karnaripa gave him the initiation of the Catuspitha-mahayogini Tantra and advised him to visit the 24 great power centers where he must find where the 24 panaceas were hidden by propitiating the 24 dakinis who guarded the panaceas by reciting each of their mantras 10,000 times.

Udhilipa set forth on his journey that very day. In time, he accomplished the task and then sought out his guru for further instruction. The guru then instructed him to prepare an elixir that would allow him to fly, an alchemical sadhana which took him 12 years to succeed and gain mahamudra-siddhi. His realization gave him the power to fly.

After serving humanity selflessly, he flew into the Paradise of the Dakinis.
By Phub Dorji Wang at February 27, 2020
Email ThisBlogThis!Share to TwitterShare to FacebookShare to Pinterest
Newer Post Older Post Home