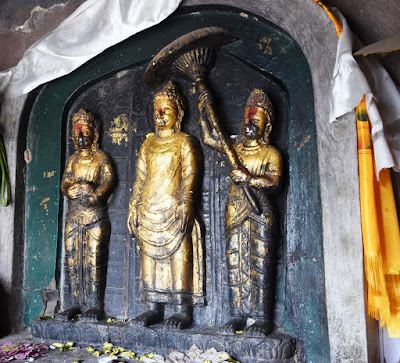 Every year we solemnize “The descending day of Lord Buddha”, but we pursue only for the sake of holiday. Most of us don’t know the occasion neither make effort to learn it. Further, many non Buddhist questioned us "the impossibilities of Buddha coming from heaven". But we failed to convince them as we don't know. So please try to understand the great occasion of Buddha coming from heaven. 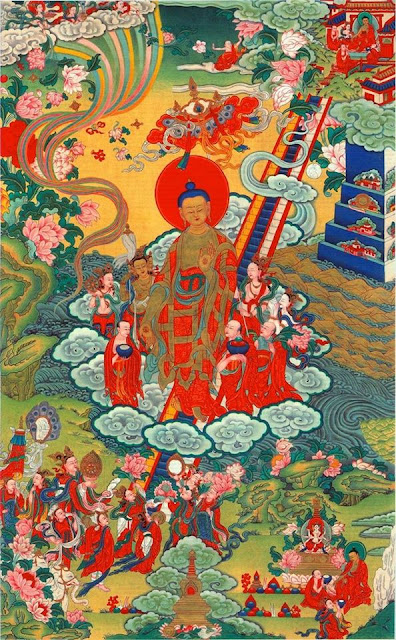 During his forty-first year Lord Buddha went up from Shravasti to the Tushita Heaven and passed the rainy season retreat teaching Abhidharma (Buddhist doctrine) to his mother, Queen Mayadevi, who had died seven days after Buddha's birth and been reborn as a male god in Tushita. The same happens to the mothers of all the buddhas, and they too later go to teach them, afterwards descending to Sankashya. 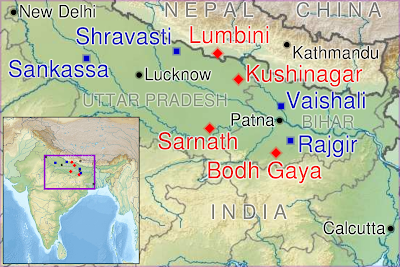 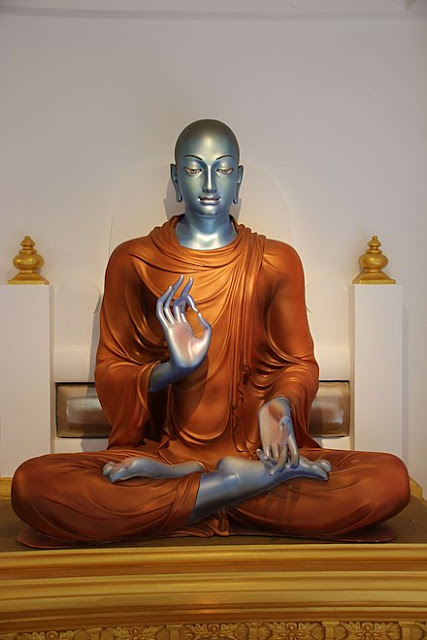 was said to have magical powers. He is also remembered as a close lifelong friend to Sariputra.) to go and greet him.

The great disciple did so, telling the Buddha that the Order longed to see him. This was the time Prasenajit's statue was made. Lord Buddha replied that in seven days he would return to the world. A great assembly of the kings and people of the eight kingdoms gathered.
As the Buddha descended, a flight of gold stairs appeared, down which he came. He was accompanied on the right by Brahma, who, holding a white chowny, descended on a crystal staircase, while to the left Indra came down a flight of silver stairs, holding a jewelled umbrella. A great host of gods followed. 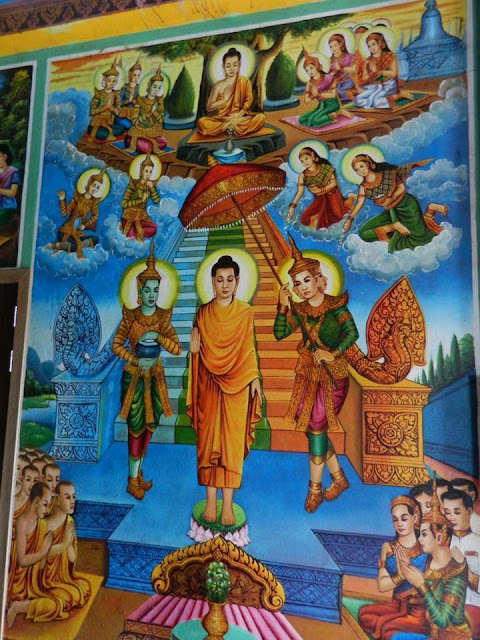 His descent from the heaven takes place at Sankashya in modern Uttar Pradesh, India.
Thus Buddha descended from Tushita Heaven where he went to repay his mother’s kindness by teaching dharma to her and other celestial beings.
He remained in Tushita for 3 months. As a result of receiving the teachings, Mayadevi attained the realization of an arhat.
On the day that the Buddha descended from Tushita he performed another miracle.
While he was standing on the jewel stairway, he looked upwards and the worlds of the devas (devaloka) and the Brahmas (Brahmaloka) were revealed.
Then he looked downward, and the hell realms were revealed.
At that time the celestial realms, the hell realms and the human realms throughout the universe were all visible to each other.
The event is the Buddha’s “opening of the worlds.”
The worlds that he opened at that time were the three worlds of heaven (devaloka), hell (yamaloka) and earth (manussaloka).
Devaloka is all the worlds from the Brahmaloka down to all the celestial realms.
Manussaloka is the world of human beings.
Yamaloka is the lower realms, all the levels of hell down to the lowest hell, avici.
When the Buddha was descending from heaven, he looked upwards and all the worlds from the human world up to the highest heavenly realm were illuminated.
As he looked around in each direction of the universe it became clear and unobstructed. 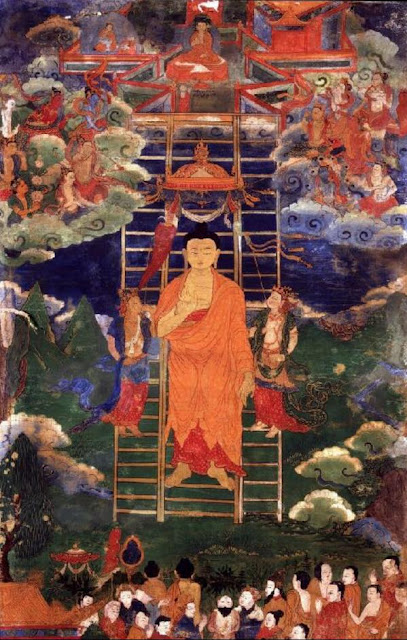 And when he looked downwards, the illumination continued down to the hell realms.
At that instant the beings living in these three realms could all see each other.
The human beings saw the devas, the devas saw the humans, the humans and the devas saw the hell beings, and the hell beings saw the devas and humans.
And all could see the Buddha descending from Tushita gloriously.
The Dhammapada commentary, composed by Buddhaghosa, states that
“On this day when the beings of all realms saw each other, there was not one who did not want to be the Buddha.” 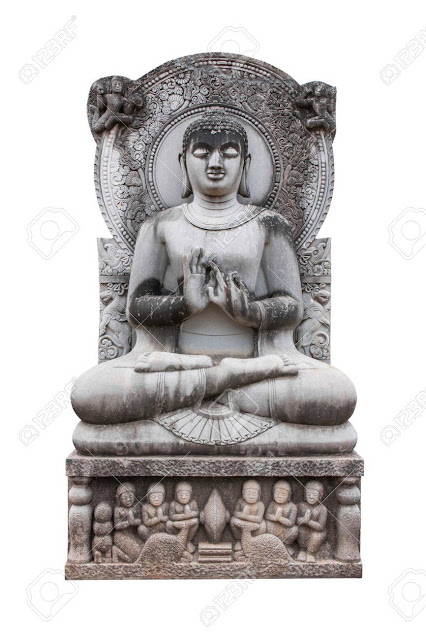 The Pathamasambodhi goes even further, saying;
“At that time, of all the devas, humans and beasts, even down to the tiniest red or black ant, who saw the Buddha, there was not one among them who did not desire Buddhahood.”
Buddhahood is the state of being a Buddha. If we were to make the story of the Buddha opening up all the worlds so that the beings could all see each other more mundane, we may interpret it to mean that on that day the Buddha gave a teaching to which people came to listen in great number, and from which people could sees the results of good and bad deeds: the result of bad being suffering, which is hell, and the result of good being happiness, which is heaven, and the possession of morality is what differentiates people from the animals. 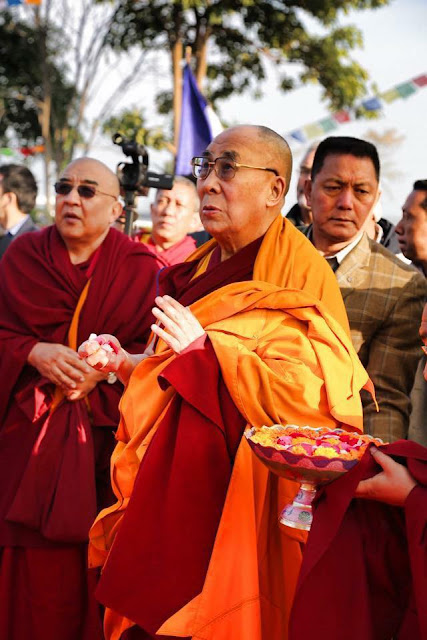 The Buddha bathed immediately after his descent, and later a bathing house and stupa were built to mark the site. 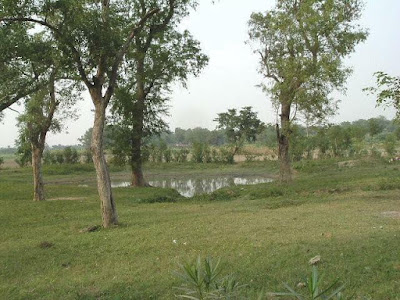 Stupas were also raised at the spot where he cut his hair and nails, and where he entered samadhi.

The Chinese pilgrims describe further stupas and a chankramana where Shakyamuni and the previous Buddhas had walked and sat in meditation. 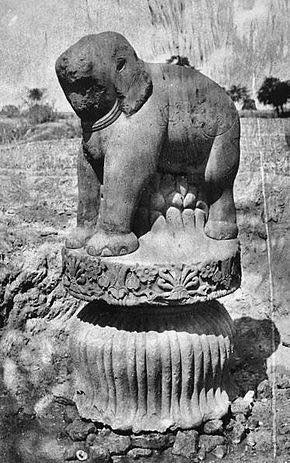 The three flights of stairs disappeared into the ground, but for seven steps of each, which remained above. When Great Emperor Ashoka came here later he had men dig into the earth around the protrusions in order to discover their depth.
Although they reached the level of water, they could not find the stairs' end. With increased faith, Ashoka then built a temple over them with a standing image of the Buddha above the middle flight. Behind this temple he erected a great pillar surmounted by an elephant capital. Because the tail and trunk had been destroyed, both Chinese pilgrims mistook this for a lion. 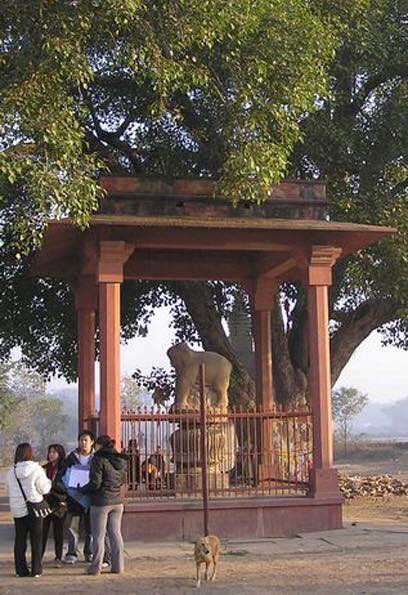 Hsuan Chwang tells that the original stairs had existed until a few centuries before his visit, when they disappeared. Various kings built replicas of ornamented brick and stone, with a temple containing images of Shakyamuni, Brahma and Indra above them. These were within the walls of a monastery, which he describes as excellently ornamented and having many fine images. He further says that some hundreds of monks dwelt there and that the community had lay followers.

Two centuries earlier Fa Hien found roughly 1,000 monks and nuns living here pursuing their studies, some hinayana and some mahayana. Both pilgrims tell stories of a white-eared dragon who lived close to the monastery, caring for it and the surrounding area. Fa Hien especially remarks on the abundant produce of the land and the prosperity and happiness of the people.
Little seems to be known about Sankashya after the Chinese accounts. In 1862 General Cunningham 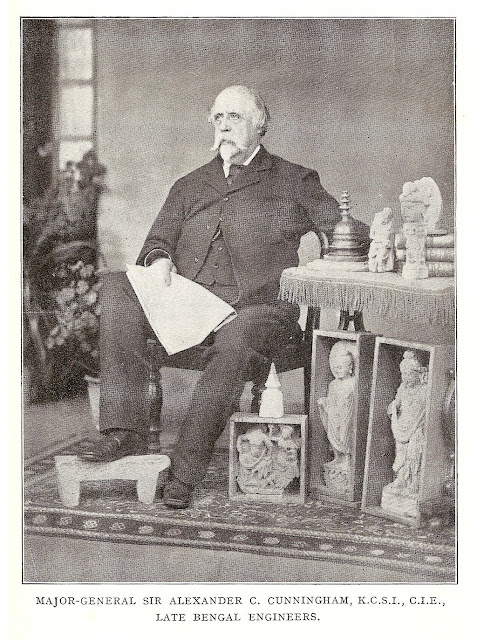 identified the spot as being located outside an obscure village west of Farruhabad, above Kanpur, on the Ganges. Not much of the ancient glory of the place remains today. Within a deserted, fenced area stands a large mound topped by the crumbling ruins of a Hindu shrine, in which the former image has been replaced by a small representation of the Buddha. 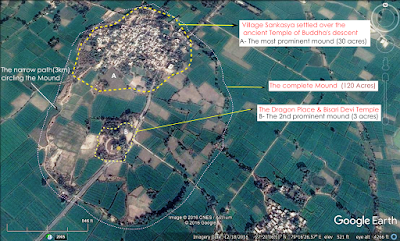 The elephant capital of Ashoka's pillar has been remounted on a ten-foot high pillar beneath a stone canopy. Another small shrine nearby contains a statue of Buddha. 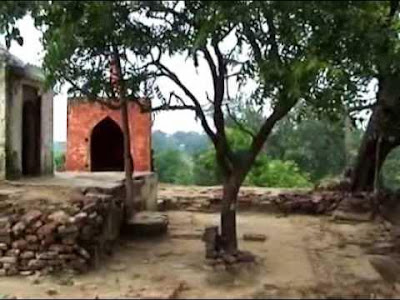 The surrounding grounds appear as if they might contain the ruined foundations of former buildings, but if any excavation has ever been done it is buried once more. 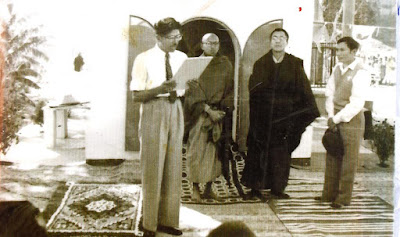 This is the only one of the eight places of pilgrimage where today there is no temple, monastery or even a solitary monk. Perhaps the wildness of the area is the cause. With or without a dragon's aid, it may be hoped that this will change.