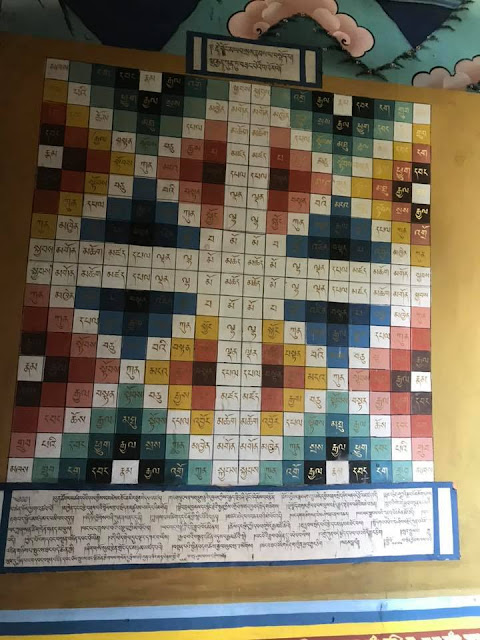 Many tourists have asked me to explain this typical image with metrical arrangements in several squares resembling a chessboard. They are seen at the entrance wall in most of the Dzongs and monasteries. This is a typical type of graph known as Kunzang Khorlo in Bhutanese, which literally means the “Wheel of Complete Good”. Such writings are common in medieval literature, where they most commonly serve to highlight the name of the poet or his patron, or to make a prayer to a Lama. Among many Kunzang Khorlo the one I saw at the entrance of Punakha Dzong is very impressive.

Kunzang Khorlo is a common poetic graph that contains poems composed by high lamas and can be read in different ways. It is considered as a sign of auspiciousness and blessing. 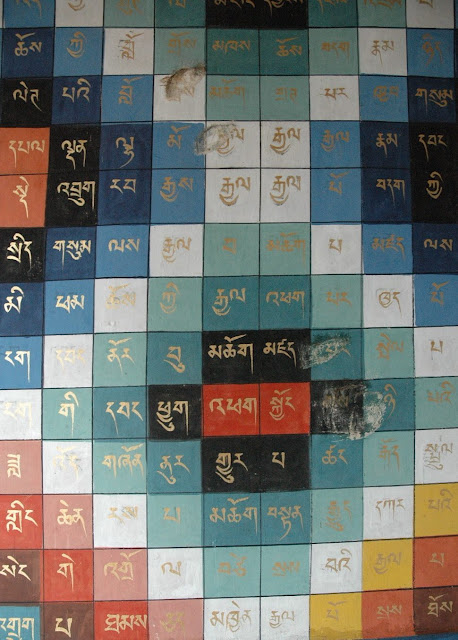 Temple walls often have paintings, which symbolize auspicious and good things life such as the six signs of longevity (ཚེ་རིང་རྣམ་དྲུག་) 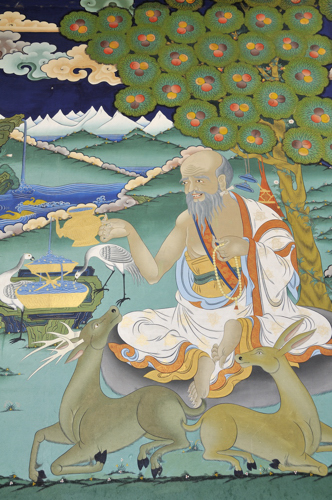 and the four friends (མཐུན་པ་སྤུན་བཞི་), 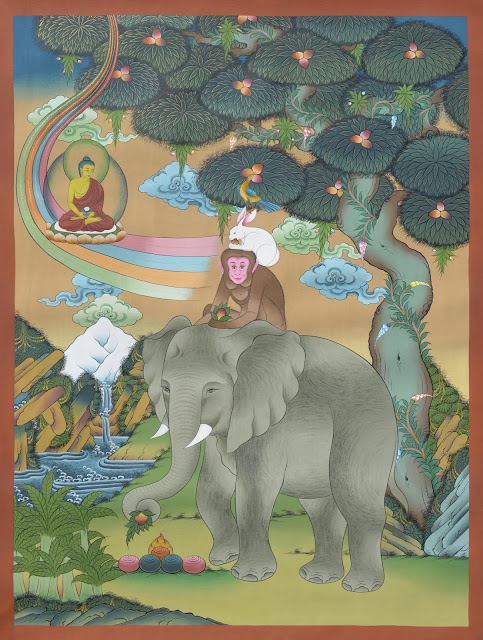 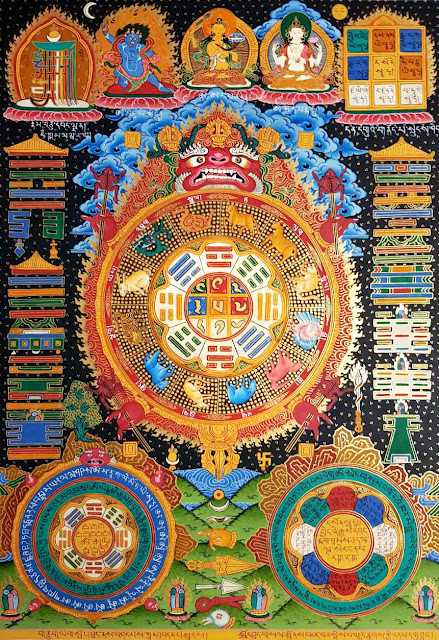 such as the cosmic maṇḍala and the four celestial kings of the cardinal directions (རྒྱལ་ཆེན་རིགས་བཞི་). The Kunzang Khorlo graph is often drawn alongside these paintings. 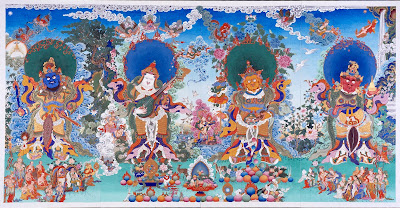 This tradition of poetry in the Himalayas is based on a type of Indian kāvya or poetics, more specifically a difficult kāvya style which the famous Indian poet Daṇḍin promulgated in his book called Kāvyādarśa or Mirror of Peotics. Daṇḍin presents the circular or wheel poetry as one of the difficult poetic styles. 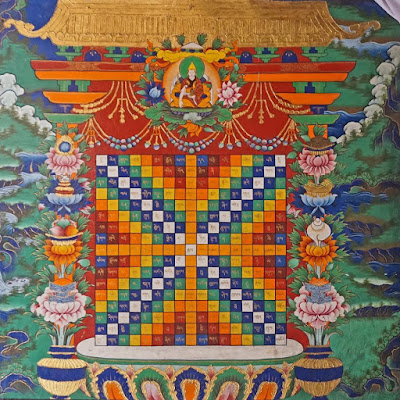 There are two types: the semi-circular or half wheel and the circular or the full wheel.
The first one is easier style having a stanza of poem, which can be read left to right or top to bottom and yet makes good sense and has poetic beauty. In the full circle or wheel poetry, the poem can be read both left to right and right to left, and both downward and upward. 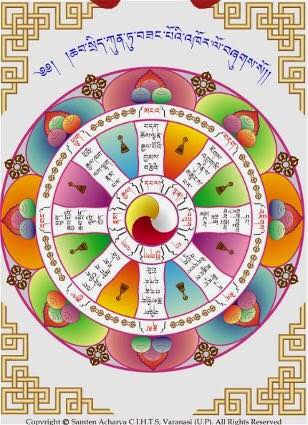 As such a combination of syllables and words are difficult to achieve, the style is considered as difficult form of poetry. The following stanza in Sanskrit, which can be read in all four ways and still works as a poem, is Daṇḍin’s example.

Daṇḍin’s Kāvyādarśa has been for centuries the locus classics of poetic studies in Tibet and the Himalayas. Thus, the full wheel or circular (ཀུན་བཟང་འཁོར་ལོ་) poetry found at Bhutanese temple and dzong entrances are also an adoption of Daṇḍin’s poetic style. The lamas compose poems which are often eulogies of other lamas in circular style so that the poem can be read left to right, right to left, upward, downward and even diagonally. 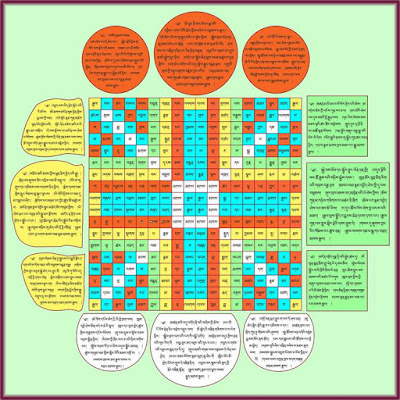 First, the graph with square boxes is drawn. The number of syllable in a line determines the numbers of boxes. The boxes are then filled by the poetic composition, one syllable in each box. The syllables and words are picked and arranged in such a way that the outcome should be a good poem while reading it left to right, right to left, upward, downward and even diagonally. Thus, like in a scrabble game, one should be able to form sensible poetic sentences in two to five directions with good sense. 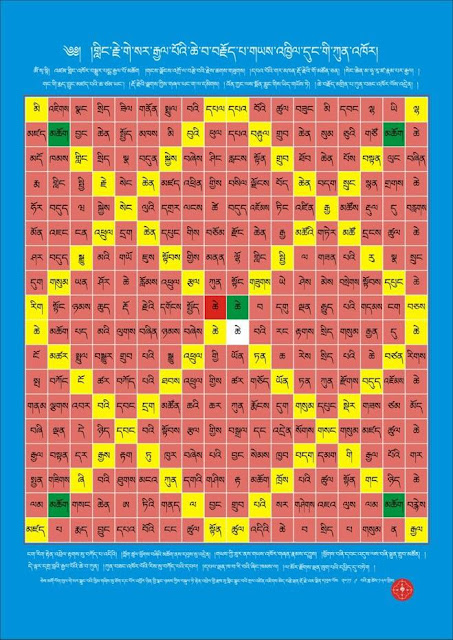 It is common to see full wheel poems on the temple walls in many part of the Himalayan Buddhist countries. While some temples reproduced circular poems composed by renowned masters in the past, other temples have new and unique circular poems composed for the site. The boxes are painted in different colours and the letter also written in colour. The number of boxes depends on the number of syllable and lines of the poem. 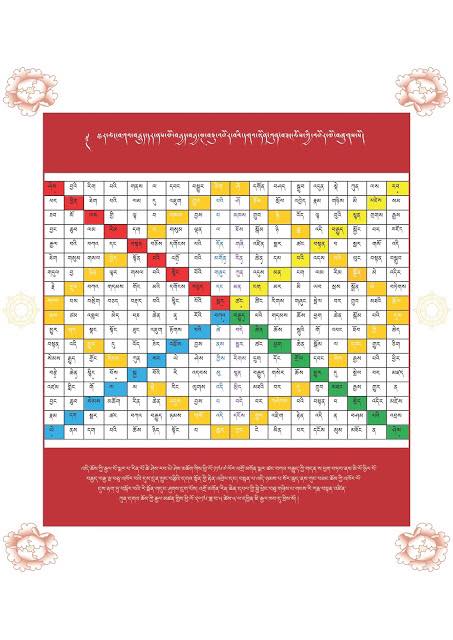 In Bhutan, the circular or full wheel style of artistic poetry is found on the walls of many temples and dzongs as one enters the premises. They are generally compositions by very erudite religious figures. 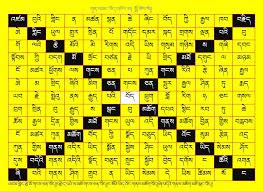 So next-time when you visit Dzongs please try to find out Kuenzang Khorlo and read it out in all direction before entering. By reading and appreciating you will carry auspiciousness inside the dzong.