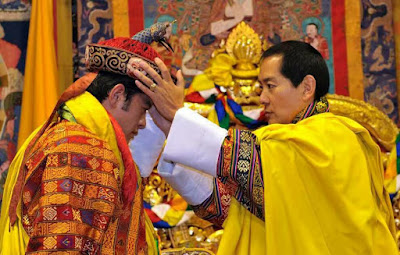 A coronation is the act of placement or bestowal of a crown upon a monarch's head. It also refers not only to the physical crowning but also to the whole ceremony wherein the act of crowning occurs marking the formal investiture of a monarch with kingly power.

Unlike other countries our Kingdom was always blessed with Great King after Great Kings. Our King is therefore an important symbol of our sovereignty, a guardian of our constitution and a protector of our people. Bhutan over the century saw 5 coronations starting with the First King Sir Ugyen Wangchuck in 17thDecember 1907. Bhutan being under isolation prior to early sixties except 4th King’s coronation at Changlimithang, Thimphu, we are not able to have a clear picture of 1st, 2nd and 3rd King’s coronations.

Nevertheless with the advancement of medias we the Bhutanese citizen with great satisfaction witnessed the live Coronation of our Fifth King Jigme Khesar Namgyal Wangchuck on  6 November 2008. It exhibited our rich cultural heritage to the world.  Excellent serious of ceremonies has been executed in a flawless manner. We are very happy that the Monarchy linage has continued, as our kings are our guardians and symbol of national sovereignty. 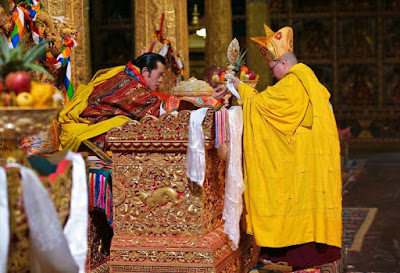 In December 2005, His Majesty the 4th King Jigme Singye Wangchuck announced his intention to abdicate in his son's favour in 2008, and that he would begin handing over responsibility to him immediately.
On 9 December 2006, His Majesty the 4th King issued a Royal Edict announcing his abdication, and transferred the throne to Jigme Khesar Namgyel Wangchuck who was officially crowned ‪on 6 November 2008, in Punakha. 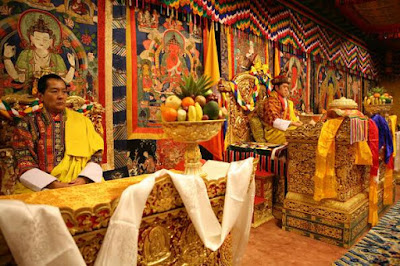 Religious ceremonies and public celebrations were also held at Tashichhodzong and Changlimithang in Thimphu.
The coronation ceremony comprised an ancient and colourful ritual, attended by thousands of foreign dignitaries, including the then President of India, Pratibha Patil.
In his coronation address, His Majesty said:

“It is with immense gratitude and humility that at this young age, I assume the sacred duty to serve a special people and country.
Throughout my reign I will never rule you as a King. I will protect you as a parent, care for you as a brother and serve you as a son. I shall give you everything and keep nothing; I shall live such a life as a good human being that you may find it worthy to serve as an example for your children; I have no personal goals other than to fulfil your hopes and aspirations. I shall always serve you, day and night, in the spirit of kindness, justice and equality.
As the king of a Buddhist nation, my duty is not only to ensure your happiness today but to also create the fertile ground from which you may gain the fruits of spiritual pursuit and attain good Karma.
This is how I shall serve you as King ... I end with a prayer for Bhutan - that the sun of peace and happiness may forever shine on our people. I also pray that while I am but King of a small Himalayan nation, I may in my time be able to do much to promote the greater wellbeing and happiness of all people in this world – of all sentient beings.”

Indeed, over a decade period of His Majesty's rule, we have witnessed a true moulding of the above promises.
Bhutan is truly blessed to have His Majesty a compassionate, a dynamic, a highly educated and down to earth King to govern our country. Every act of His Majesty was appreciated not only in Bhutan but all over the world. 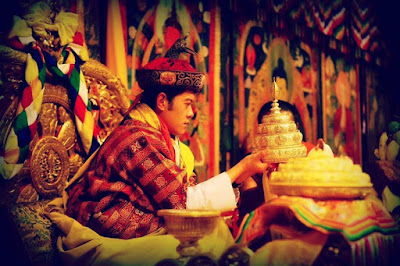 Every year 1st November is the reflection of this great day and to rededicate our self to the service of Tsa-wa-Sum (King, Country and People).

Bhutan was founded by our great Zhabdrung Ngawang Namgyel who unified Bhutan into one religious state in 1616. After his passing, Bhutan was governed by the Zhabdrung’s recommended “dual system of government” where government control was split between a civil administrative leader (Druk Desi) and a religious leader (Je Kehnpo). 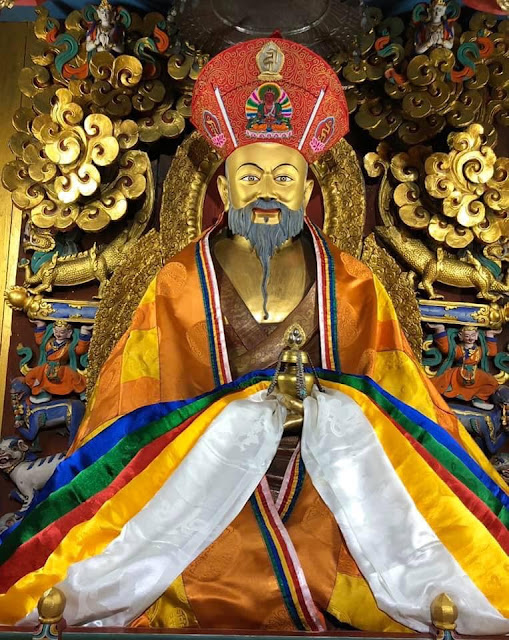 The dual system of government however ended with Jigme Namgyel’s descendant Ugyen Wangchuck. Jigme Namgyel’s family had direct lineage to the Terton Pema Lingpa and relations with two rebirths of the Zhabdrung Rinpoche. He was chosen to be the Penlop (Governor) of Trongsa and amongst all rulers, he was the most powerful, however he passed away unexpectedly before he had the chance to unify Bhutan through a monarchy system. 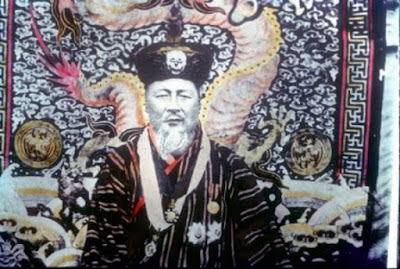 His Majesty Gongsa Ugyen Wangchuck, born in 1862, succeeded his father, Jigme Namgyel as the Penlop (Governor) of Trongsa. He held his power base in Central Bhutan and unified Bhutan by defeating political enemies through a period of civil wars and rebellions in the early 1880’s.

·      He developed close relations with the British by assisting with negotiations between Britain and Tibet.
·      He was elected to be the hereditary monarch of Bhutan in the year 1907, giving rise to Bhutan’s first King, and ending the dual system government.
·      He was crowned on December 17, 1907 with the title Druk Gyalpo (Dragon King).
·      He passed away in 1926 and was succeeded by his eldest son His Majesty Jigme Dorji Wangchuck. 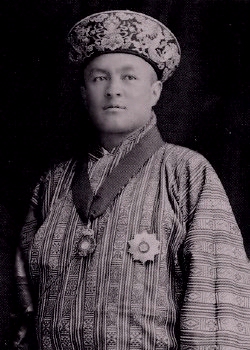 His Majesty Jigme Wangchuck, the second ruler of Bhutan, born in 1905, ascended the throne in 1926 upon the passing of his father. He was raised from a child as the successor to the throne and received a strict education in English and Hindi and was schooled in Buddhist principles. 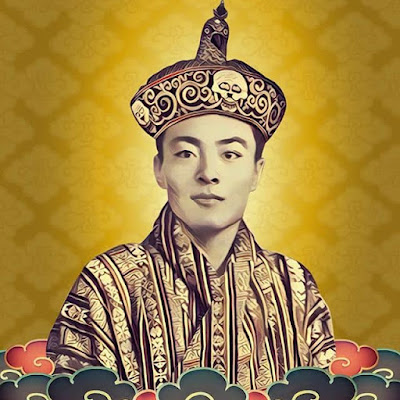 His Majesty Jigme Dorji Wangchuck, born in 1929 ascended the throne at the age of 23. He is known as the Father of modern Bhutan, and like his father, he was educated in English, Hindi and Buddhist principles. He also spent six months in England during his youth.

·      He ended Bhutan’s isolation to the world.
·      In 1956, he took the big step of ending feudalism; redistributed land to the landless while monasteries gave up land in exchange for financial support from the government.
·      In 1961, he drafted the country’s first economic development plan, of which Bhutan is still following till to date.
·      He recognized the need to establish international relations for the world to recognize Bhutan as a country and to protect his country’s sovereignty he engaged foreign nations in the development of Bhutan. European nations was involved in the country’s developmental projects.
·      In 1862, he joined the Colombo Plan where Bhutan received technical assistance for infrastructure development and educational scholarships.
·      In 1971, under His Majesty King Jime Dorji Wangchuck’s reign, Bhutan became a member of the United Nations, which was very import for small country Bhutan.
·      He setup a modern judicial system, and the country’s first Council of Ministers.
·      He established a National Assembly (tshogdu) who had the power to remove the King or his successors with a two third majority, allowing Bhutan to take the first step towards democracy.
·      He passed away in 1972 while receiving medical treatment in Nairobi, Kenya. His son His Majesty Jigme Sinye Wangchuck succeeded him. 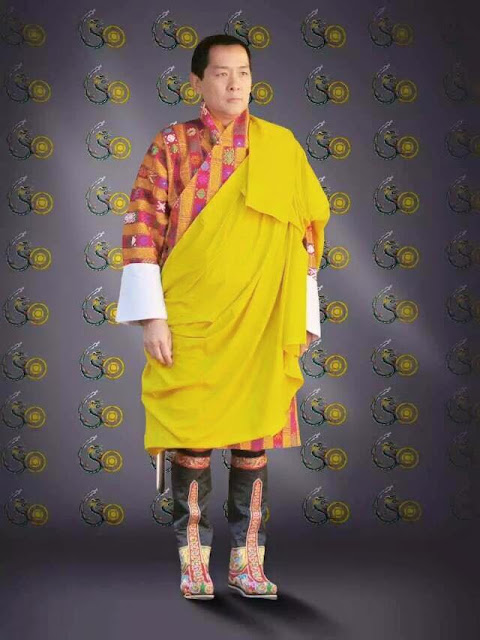 His Majesty Jigme Sinye Wangchuck, the fourth ruler of Bhutan, born in 1955 ascended the throne when he was just 17 years old, making him the youngest monarch in the world. His Majesty had received a modern education when he was a child, studying in India and the United Kingdom. He grew up close to his father, accompanying him to tour to remote parts of Bhutan, and gaining first hand knowledge of his land and his people. He was influenced by his father, and continued with the phase of modernization and socio-economic reforms that his father had set in motion.

·      He continued to establish international relations, joining many regional cooperative bodies and making itself heard in the United Nations, cementing the nation’s independent and sovereign status.
·      He established industries in raw materials, agriculture and hydropower.
·      He built extensive roads connecting the country even in the remote areas
·      He built many schools believing in the importance of education
·      He started country’s first airline, Drukair.
·      He slowly started the process of decentralizing his power, and in 1998, the role of Prime Minister was created.
·      In 2006, he announced the time had come for a democratic government. He researched the constitutions of more than 50 nations, seeking comments from the public and consulted with the 20 Dzongkhags.
·      He enacted the constitution in 2008 and elections were held in the same year, giving birth to a new system of governance.
·      He led an army in 2003 and successfully flushed out insurgents from India who had established several powerful bases in the Bhutanese forests. The operation was a success, and surprised the international world as the militants were flushed out in three days.
·      He was also the creator of the now internationally known philosophy “Gross National Happiness”. This philosophy emphasized on how development of the nation should be carried out taking into consideration the happiness of the people.
·      He created history when he became the first King in Bhutan to abdicate his throne to his son, His Majesty Jigme Khesar Namgyel Wangchuck in 2006. 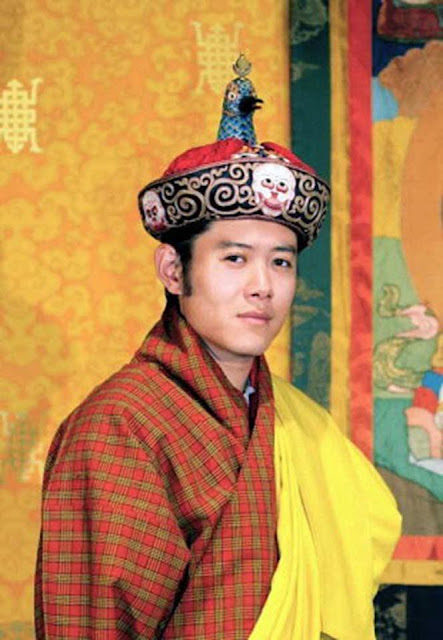 His Majesty Jigme Khesar Namgyel Wangchuck, the fifth ruler of Bhutan, born in 1980 was coronated in a ceremony on November 1, 2008, the year that marks the 100 years of monarchy in Bhutan.

His Majesty received a foreign education, studying in the United States before graduating from Magdalen College, University of Oxford.

·      He oversaw the implementation of the Constitution of Bhutan, bringing to his people the democracy his father has wished for.
·      He started landmark project the National Cadastral Resurvey in March 2009, which focuses on improving the lives of people living in remote parts of Bhutan.
·      In 2011, he launched the Kidu Foundation. The role of the Kidu Foundation is to work with government efforts to address critical issues in areas of education, the rule of law, democracy and media, sustainable economic development, and preservation of the country’s environmental and cultural heritage.
·      In 2011, he married Ashi Jetsun Pema and the royal wedding was Bhutan’s largest media event in history. During the ceremony, the King also received the Crown of Druk Gyaltsuen (Queen) and bestowed it on Ashi Jetsun Pema, thus proclaiming her formally as the Queen of the Kingdom of Bhutan.
·      He travel internationally and raised the profile of Bhutan as a sovereign country.
·      The fifth Druk Gyalpo has gained the respect of his people, and proved that he will continue to promulgate the democracy his father had championed for during his reign.

On this auspicious day I wish his Majesty a very Happy Coronation Day.
By Phub Dorji Wang at October 31, 2019
Email ThisBlogThis!Share to TwitterShare to FacebookShare to Pinterest
Newer Post Older Post Home