The great Dudjom Lineage and the present Yangsi 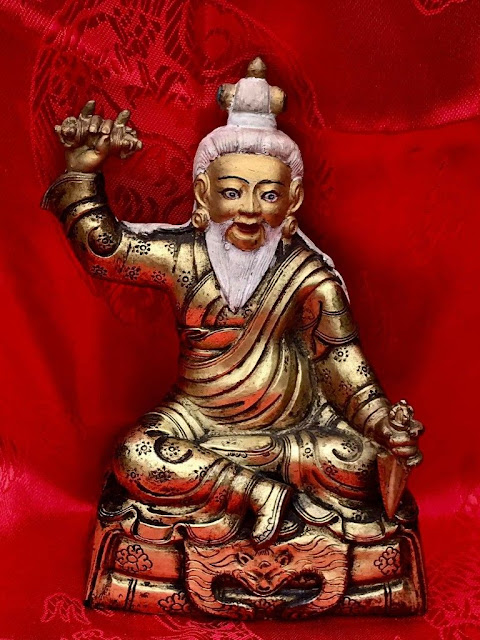 The Dudjom lineage was established in 1835 by Dudjom Lingpa who is considered a mind manifestation of Guru Rinpoche and the body manifestation of Drogben Lotsawa, one of the 25 main disciples of Guru Rinpoche. It is also believed that in one of his previous lives, Dudjom was sariputra, a renowned disciple of Buddha Shakyamuni.
The second reincarnation 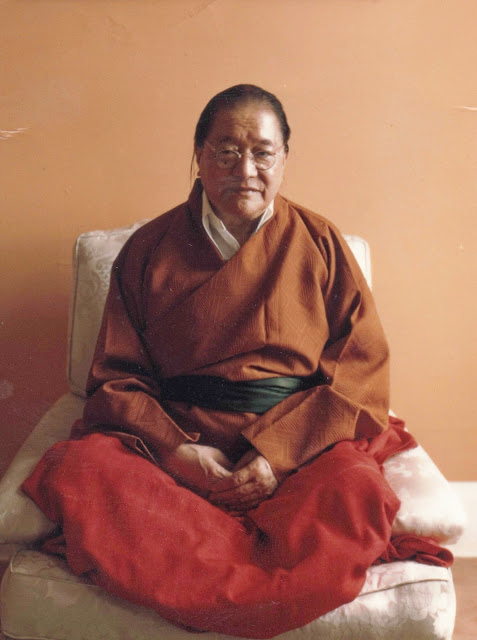 His Holiness Kyabje Dudjom Rinpoche or Dudjom Jikdral Yeshe Dorje  (1904-1987). He was one of Tibet’s foremost yogins, scholars, and meditation masters. He was recognized as the incarnation of Dudjom Lingpa (1835-1904.
Considered to be the living representative of Padmasambhava, he was a great revealer of the ‘treasures’ (terma) concealed by Padmasambhava. A prolific author and meticulous scholar, Dudjom Rinpoche wrote more than forty volumes, one of the best known of which is his monumental The Nyingma School of Tibetan Buddhism: Its Fundamentals and History. Over the last decade of his life he spent much time teaching in the West, where he helped to establish the Nyingma tradition, founding major centers in France and the United States. 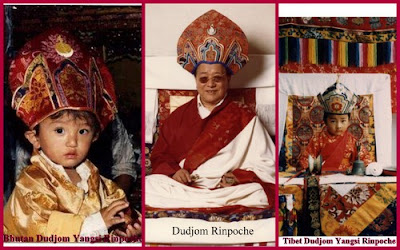 Two boys have been recognized as the Yangsi of   Dudjom Rinpoche, Jigdral Yeshe Dorje. 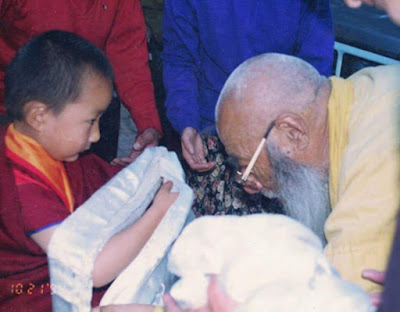 He was born in Eastern Tibet in Jyekundo in Qinghai prefecture in 1990 on the auspicious day of dakini with many miraculous signs, such as rainbow lights surrounding their house. While still in the womb, many propitious signs appeared and his father, Dola Rinpoche, often dreamed of the previous Kyabje Dudjom Rinpoche coming to his house and sitting on a high throne. 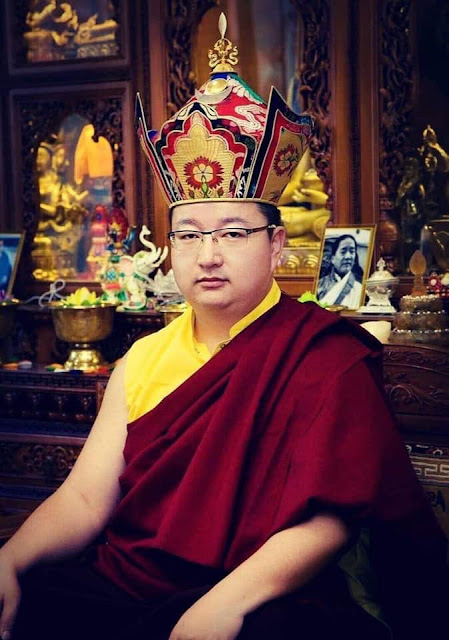 After he was born many great masters said that he is a reincarnation of great Sakya master or that he is the reincarnation of Panchen Rinpoche. Dzongsar Jamyang Khyentse Thubten Chokyi Gyatso Rinpoche said when he met him, however, that it is certain he is a Nyingmapa and he bestowed the empowerment of the Lakeborn Guru Rinpoche according to the Dudjom Tersar and gave him the name Pema Osel. 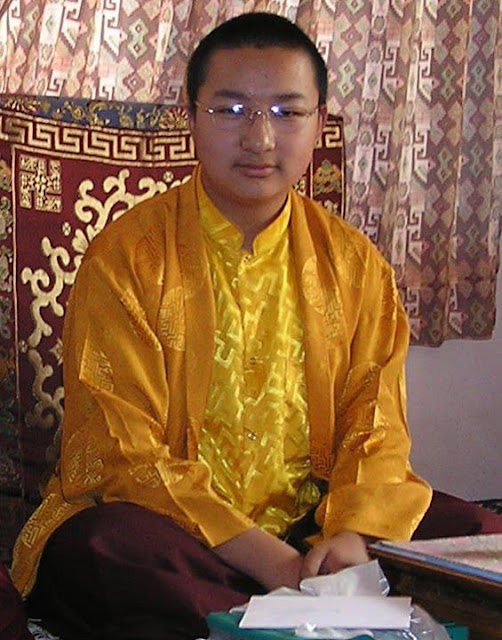 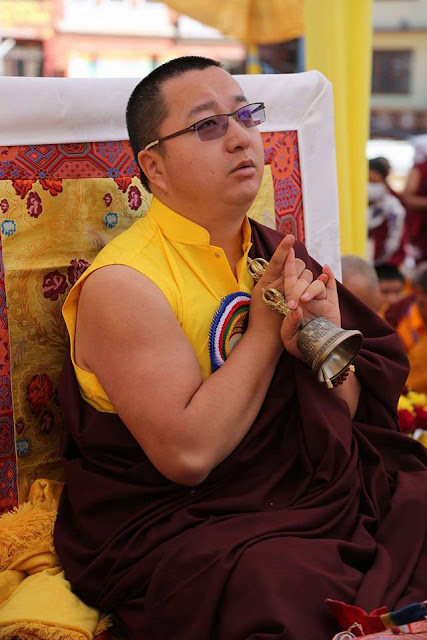 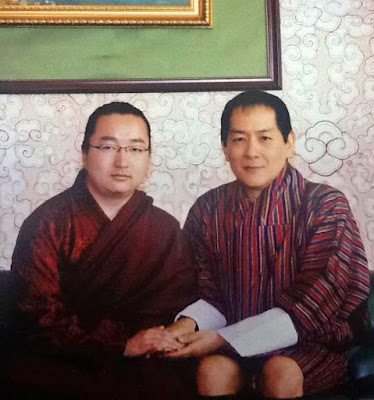 In 1994, complying with the letter of Kyabje Chadral Rinpoche, Yangsi Rinpoche came to Nepal. There, at Godavari, which is one of 24 the most holy tantric sacred places, in 1994, the wood dog year, on the auspicious day of the Buddha Descending from Tushita Heaven, with the presence of the head of the Nyingma School, Kyabje Penor Rinpoche, and with Dzongsar Khyentse Rinpoche, Shechen Rabjam Rinpoche, Kathok Situ Rinpoche, and many other great lamas, khenpos, tulkus and many thousands of people, Kyabje Chadral Rinpoche led the enthronement ceremony proclaiming that he is a reincarnation of Kyabje Dudjom Rinpoche and giving him the name Dudjom Sangye Pema Zhepa Drodul Rigdzin Trinley Drubpe Dey. 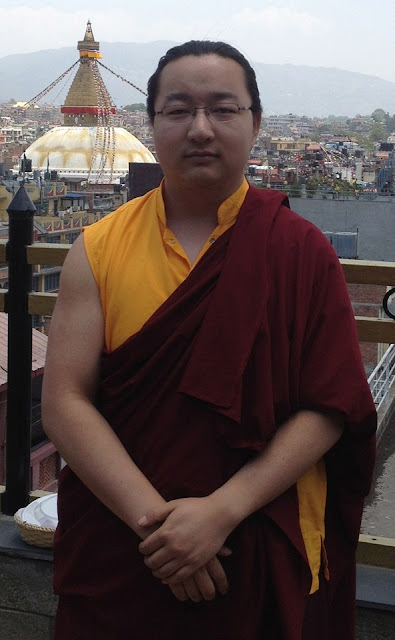 Then Kyabje Chadral Rinpoche started to teach him writing and reading and later he gave him empowerments, oral transmissions, and complete instructions. Kyabje Chadral Rinpoche is his root master who kindly granted him Dharma, food, clothing, and shelter too. Nonetheless, from Kyabje Penor Rinpoche, Khenchen Jigmed Phuntsok, Khen Achug Rinpoche, Namtrul Jigmed Phuntsok, Khandro Tare Lhamo, Khandro Kunsang Wangmo and many other authentic masters, he received all the tradition of sutra and tantra, their teachings, empowerments, and all the transmissions without exception. 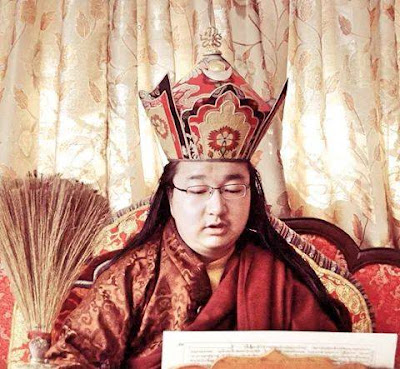 He did a three-year closed retreat according to tradition at the Kunkhyen Longchenpa Cave, called Gangri Thodkar, in Tibet, practicing on the three roots, from the two phases of creation and dissolution until dzogchen. All this he completed and accomplished according to the tradition of the Nyingma. 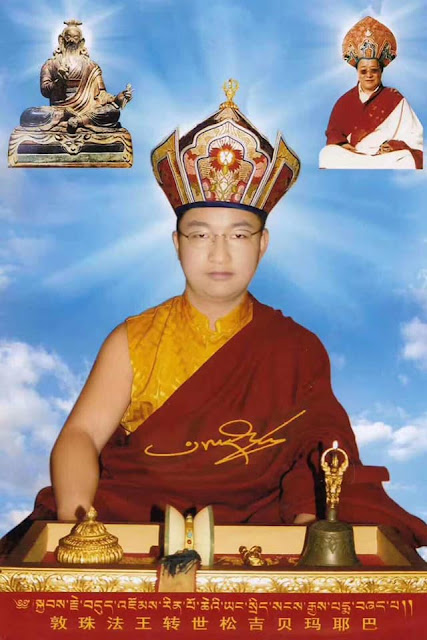 For the benefit of beings, the world, and the teachings, Yangsi Rinpoche is pouring the nectar-like dharma all over the world unceasingly without thinking of his own hardships or fatigue. 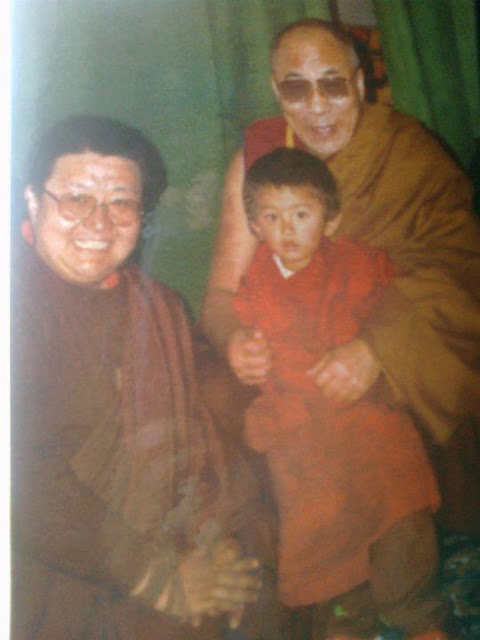 He was born by caesarean section on 9th October 1990.  His father is Kesang Dadul, the son of Dasho Drongong, a descendant of Nyo lineage of Bumthang. His mothers Sonam Chokyi, daughter of Colonel Penjo Ongdi and Choden. Choden is the daughter of the mayor of Kyengkar who too was from the Nyo lineage.  Sonam Chokyi feels a strong connection with H.H Dudjom Rinpoche, Jigdral Yeshe Dorje and it is recounted that following a dream she had, Dudjom Rinpoche interpreted it to mean that Guru Rinpoche himself had directly blessed her.  Messengers came to her in dreams and told her that she was bearing the Tulku of Dudjom Rinpoche and these coincided with dreams and signs experienced by Sangyum Kusho, H.H Dudjom Rinpoche’s first wife. 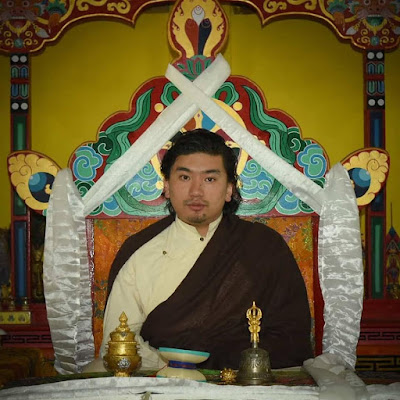 These were further supported by a prediction letter given to Sangyum Kusho by Rinpoche while was still alive. Thus it was that when Sangyum Kusho learned that Sonam Chokyi, whose name corresponded to His Holiness' prediction letter, had an extraordinary son, it seemed that all auspicious conditions for finding the genuine incarnation had spontaneously appeared.  But even though Sangyum Kusho felt in her heart that Tenzin Yeshe Dorje was His Holiness’ Tulku, there were other remarkable children at the time, so she collected information on five and sent them to HH the Dalai Lama requesting his guidance.  A month later, the Dalai Lama gave his decision, saying that since the recognition was of utmost importance to the Nyingma tradition, he had made very careful divinations which pointed to Shonnu Senge and to the names of his parents as well. Following this, His Holiness issued a detailed letter recognizing Shonnu Senge, which was his birth name, as the incarnation of His Holiness Dudjom Rinpoche. 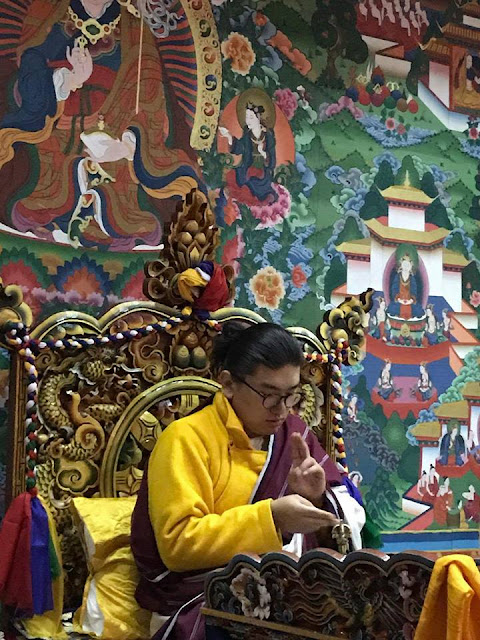 The Gomchen Draktsang of the Kudung temple performed the long life ritual of the Chime Sogtik for the Tulku, at his residence in Nepal; this occurred on the fourth day of the sixth month of the Water Monkey Year. Late HH Trulzhig Rinpoche, fifth head of Nyingma lineage with Dudjom Dungsey Shenphen Dawa Rinpoche, conducted the enthronement ceremony. At this time, Sangyum Kusho offered a golden robe, a white scarf and a lotus hat to the new incarnation. When the child was ceremoniously placed on his golden throne, many disciples of HH Dudjom Rinpoche were present including many tulkus, lamas and sangha members from India, Tibet, Sikkim, Bhutan and Nepal as well as Western disciples from France, America, Taiwan, Hong Kong and Singapore, altogether three hundred representatives from fifteen countries. 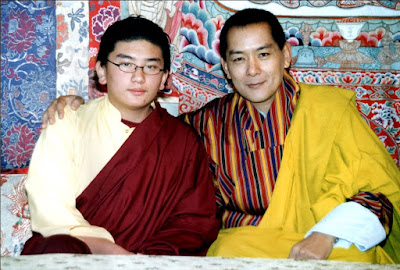 In March 1993, His Holiness the Dalai Lama called Shonnu Senge to Sikkim to receive his official name, Tenzin Yeshe Dorje. Thousands of followers travelled to see him as word of the young incarnation spread among the devotees. En route to Sikkim, the Tulku stopped at Zangtok Pelri, his own Gompa situated on a mountaintop in Kalimpong. This was the first monastery built by His Holiness after his departure from Tibet in 1954. His Holiness, who had precious statues brought from Tibet that were placed there, carefully guided the construction of this Gompa. Enthronement Ceremony of His Holiness Dudjom Tenzin Yeshe Dorjee In a ceremony spanning three days, September 30 to October 2, 1993, thousands congregated from around the world to witness the auspicious enthronement ceremony of His Holiness Dudjom Tenzin Yeshe Dorjee at Orgyen Dorngak Choling Gompa, Boudhanath, Nepal. His Holiness left his residence for his monastery in an open jeep decorated with colourful scarves and shaded by a symbolic umbrella born by two lamas. At Chabahil, crowds lining the route to the monastery swamped His Holiness’ motorcade. His holiness was then escorted from the road to the monastery by lamas and monks in a traditional ceremony. HH Dzarong Trulshik Rinpoche in the sanctified hall of the Kudung Chorten of His Late Holiness conducted the ceremony. The main ceremony inside the monastery was attended by His Holiness' family, Dudjom Sangyum Kusho and family, and high Nyingma Lamas from other lineages, including His Holiness Drubchen Rinpoche. Guru Lau was present leading followers from Taiwan, Hong Kong, Singapore and Malaysia. All offered Kusum Mendel to His Holiness. At the ceremony, the host country was represented by the Prime Girija Prasad Koirala; the King of Bhutan by the Lord Chamberlain Dasho Gyalpo Zimpon; His Holiness the Dalai Lama by his religious chief secretary; the Monastic Order of Bhutan by His Excellencies Tulku Jigmi Choida and Tse-Ngon Lopon. Due to the special circumstances of the occasion, His Holiness had to sit on his throne in a crowded hall for up to six hourly stretches, giving blessings to thousands each day. His Holiness, though barely three years old, was patient and performed his duties faultlessly. All who witnessed His Holiness skillful competence were deeply moved. Yangsi Rinpoche had kept many miracles of hand and footprints during special occasion, where we can see today. 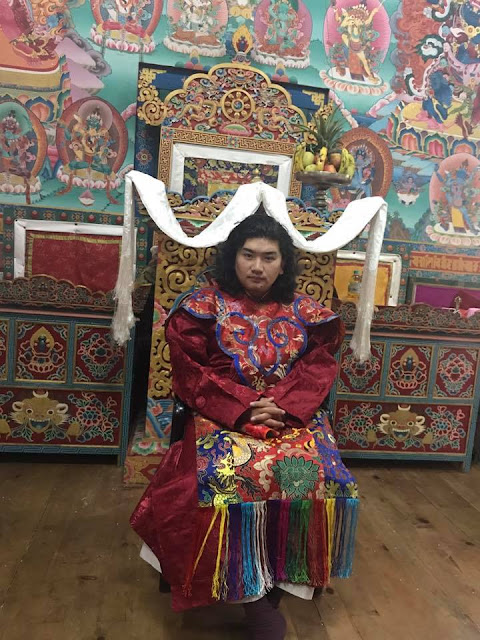 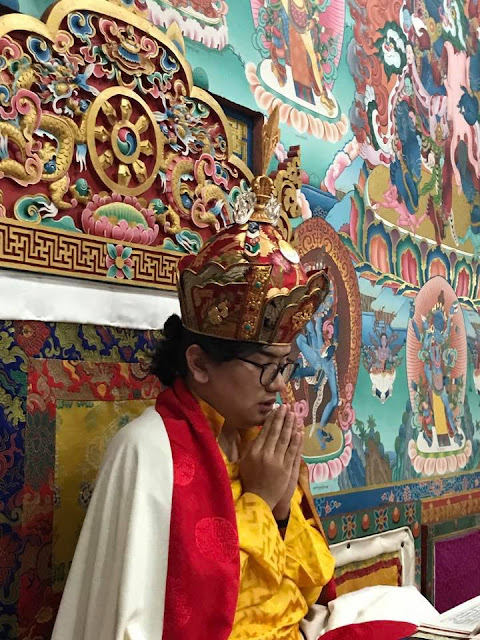 In May 1994, His Holiness and entourage once again ventured forth into Bhutan for the pilgrimage to the picturesque valley of Singye Dzong. His Holiness had to traverse through much of Eastern Bhutan being warmly welcomed wherever he went.
Dudjom Rinpoche resides and studies at Dudjom Namdrol Choling across the valley from the Yanglashoed cave in Parphing, Kathmandu, and at his main residence in Sartsham Chorten, opposite Takshang Monastery, Paro, Bhutan, where he has founded a gomdey, or study and practice center for lay practitioners. Rinpoche also heads and oversees the activities of the Nyimalung Monastery Dratsang in Bumthang and Gelephu, Bhutan. He was appointed as the monastery’s head abbot, or spiritual director, in 2005 by Bhutan Government. 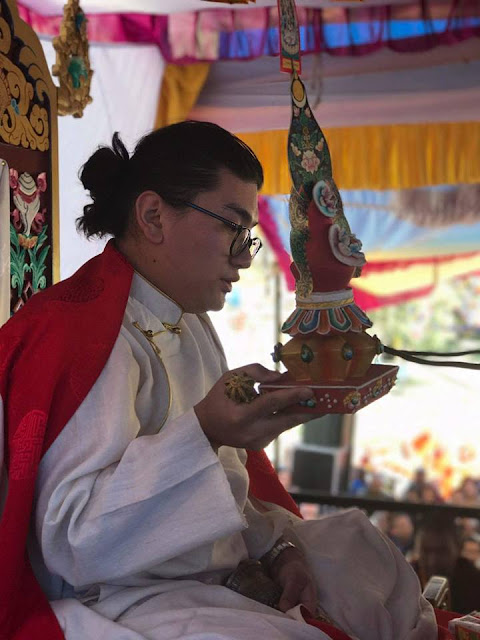 In the last few years, Rinpoche has performed many drubchens (multi-day ceremonies) and conferred initiations at various monasteries in Bhutan and India, and has presided annually at the Ngagyur Nyingma Menlam Chenmo world peace prayers at Bodhgaya, India. 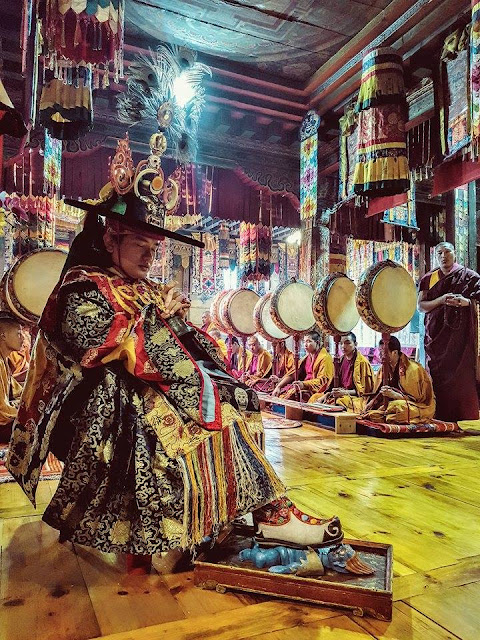 Both Yangsis appear to have inspired by all who have come close to them with their authenticity from high lamas to the general public. And respected equally everywhere in this dharma world.