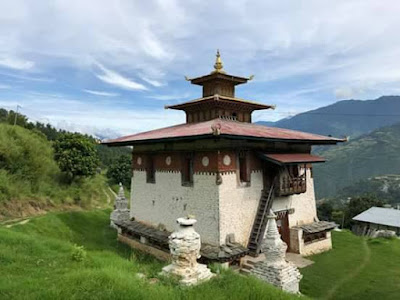 Yakgang Lhakhang is sited in a village on the outskirts of Mongar town. It was built in the 16th century by Lama Sangdag, the youngest son of Terton Pema Lingpa. It is around three km from Mongar town. Sherab Reldri Higher Secondary School, the first private school in eastern Bhutan is located nearby.
It is a private monastery, taken care by the family lineage of Terton Pema Lingpa (Yagang Choeji). Happy to meet the Aum the present lineage of Terton Pema Lingpa and her husband Lopen Tsampa.
This temple is renowned for its compendium of religious treasures, masks, musical instruments, armor, ancient weapons, and xylograph blocks used for printing prayer flags and texts.
The ground floor houses three Buddhas (past, present and future). Guru Rinpoche, Chenrizig, Terton Pema Lingpa, and Gyapo Lhashang. The caretaker Tsampa pronounces that if family required a specific child, boy or a girl they come to the monastery and pray to Gyalpo Lhasang who does answers their prayer. So friends please take note of it.

Above the main statues there are series of old stupas. On one corner the walking stick of Terton Pema Lingpa was kept. I got blessing from it and received small cloth relic. On the interior wall beautiful painting of Guru Rinpoche’s are seen. 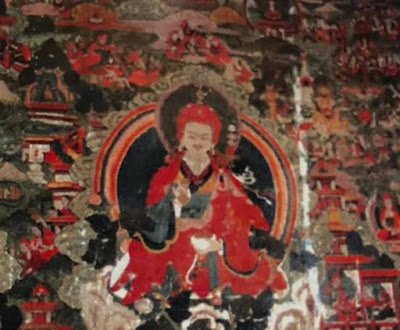 On the first floor, we saw statue of Kuentuzangpo, Tandin and other statues.
The monastery is severely damaged by earthquake and required immediate restoration. I saw lots of cracks on the walls. 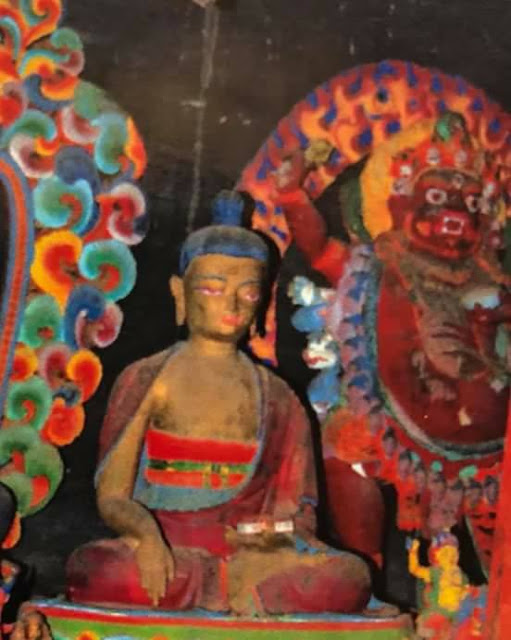 There is traditional house next to the monastery where the caretaker/owner live. Surprisingly inside this house there is another   lhakhang. The main Termas, the holy sacred relics were kept inside this monastery in a safe locker. It is displayed only once in a year to the public during the birth anniversary of Guru Rinpoche (10th day of the fifth lunar month). Visitors are not allowed to enter this lhakhang on other days.
I reached on odd period but nevertheless after persuasive request, my prayer was answered. I was given access to all Termas. What a blessing of a life!
The following are the sacred holy relics:
1.    Buddha discovered by Terton Pema Lingpa in Mebartso, Bumthang (It is said that Tertoen Pema Lingpa came out from Me-Bar tso with a wax casket and holding a butter lamp in his other hand. One of the spectators, the Chokor Dep (Local King of Bumthang) insisted the Terton to open the casket and on his reluctance, the Chokor Dep struck the relic casket with his sword. On hitting with the sword, it is said that three statue of Buddha flew away from the casket. One of these statues is in Jakar Dzong, the other in Dongkola Goenpa and the last one is residing at Yakgang Sanga Choeling Goenpa. The other two statues are taken care and everyone knows its origin and importance, but many people do not yet know the one in Yakgang Lhakhang. This statue has the mark of sword on its shoulder proving it as an authentic Terma.
2.    Guru Rinpoche‘s spectrum
3.    Three long jaws of Tacho Balab, horse of Guru Rinpoche.
4.    Munjushri statue terma
5.    Jetsun Dolma statue terma
6.     Tshepami statue terma
7.    White couch Terma  (It is explained that by blowing this conch one can stop the hailstorm immediately)
8.    Ringsel of Ashi Nagsel
9.    Skull of King of Naga, Batshota
10.Phurba made by Terton Pema Lingpa
11.Baking pan made by Terton Pema Lingpa (It is believed that eating of baked cake from this pan can liberate one from the lower realm. The cake is baked only on 10th day of 5th lunar month and distributed to the public)
12.And many more statues, two identified by His Majesty the Fourth King.
The Lhakhang organizes an annual three-day tshechu on the 8th, 9th and 10th of the fifth lunar month every year. This festival is one of the oldest festivals held in eastern Bhutan. 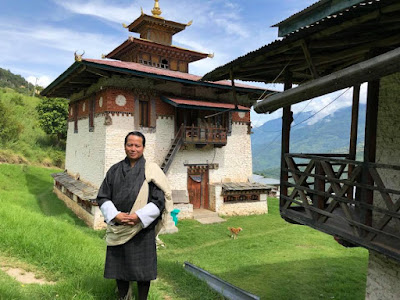 The monastery is very sacred that carry important history. If you happen to visit Mongar, please visit Yagang monastery. While you may not have access to the Termas but certainly you will get blessing from the sacred monastery.