Drilbu (Vajra Bell) and significance of its parts 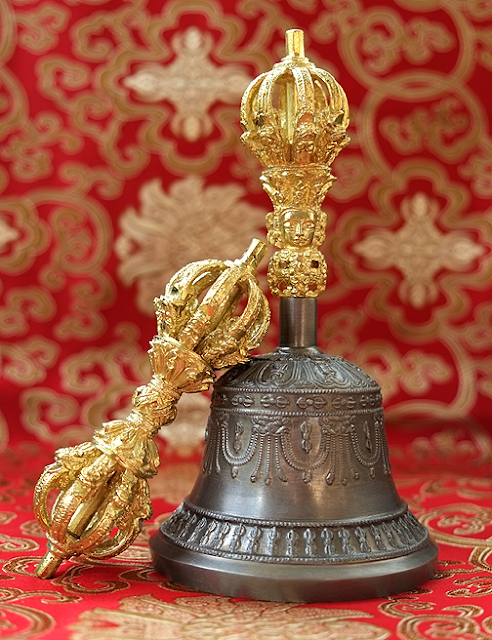 One of the most important and commonly used religious implements in Vajrayana Buddhism is Drilbu (bell) and Dorje (thunderbolt). You will always see these two items with any lama or Rinpoches. They are inseparable symbols, because together they represent indivisible emptiness and form or wisdom and compassion. In Mahayana Buddhism, both wisdom and compassion—together—are the path to Enlightenment. 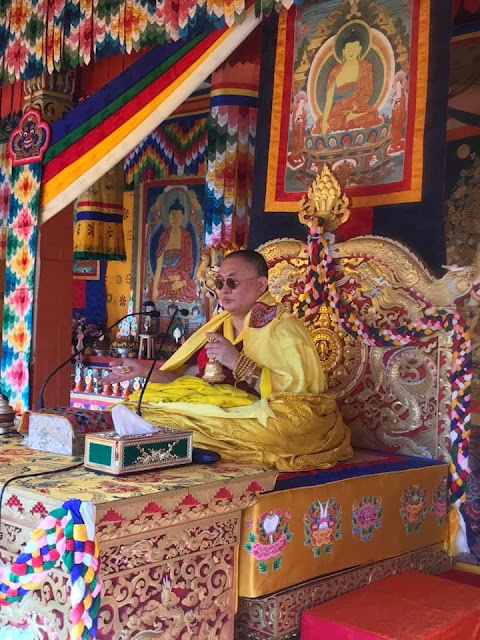 You will be surprised to learn that Drilbu represent whole universe.  Literally, the entire relative universe—or in particular practices—the mandala of the Deity, is represented on the extraordinary Bell.

Here are the representations of parts of Drilbu:
Disc of Space: the outer rim of the bell represents the outer disc of space.

Vajra Fence: the second protective circle of the mandala as 32 or 65 upright Dorjes (Vajras).

Lotus Womb: the upper level of pearls or malas (surmounting the Vajras) is the third protective circle.

Earth Disk: above the Lotus Womb is an open, unadorned area, representing the disk of earth.

Offering Goddess Platform: the two rows of pearls above the eight faces represent the decorations of the offering goddess platform and walls.

Vajra Platform: The horizontal Vajras above the Goddess Platform represent the eight or sixteen emptiness’s and also the indestructible Vajra Platform, the material of the mandala’s central dais.

Lotus throne of Mandela deity: Inside the lotus, surrounding the stem of the bell, is a smaller lotus of 24 or sometimes 32 spokes, representing the lotus-throne of the mandala’s central deity—you can visualize either Prajna Paramita, the face of the Perfection of Wisdom who adorns the bell, or the mandala of your Yidam deity.

Six rings of six perfections: At the base of the handle, and under the crowning vajra (which always tops the bell), are six more rings, representing the six perfections of the Prajna Paramita.

Longevity vase of nectar: Between the three top rings and the three bottom rings is a square or round base, representing the longevity vase of nectar.
Wisdom face of Pragnaparamita or Yidam Deity:
Above the vase, is the very face of wisdom, the ultimate wisdom Mother Pajna Paramita, wearing a five-wisdom jeweled crown and with her hair bound, representing the binding of all diverse views into a single non-dual reality.

Vajra Crown:
Above the Goddess is the lotus base of the vajra crown. The vajra crown is the very embodiment of the Five Wisdom Buddhas: Akshobya, Amitabha, Amoghisiddhi, Vairochana, and Ratnasambhava.

Note: Some bells have a finger-whole, for the ring finger, replacing the longevity vase and sometimes the face of Prajn Paramita. This represents emptiness. 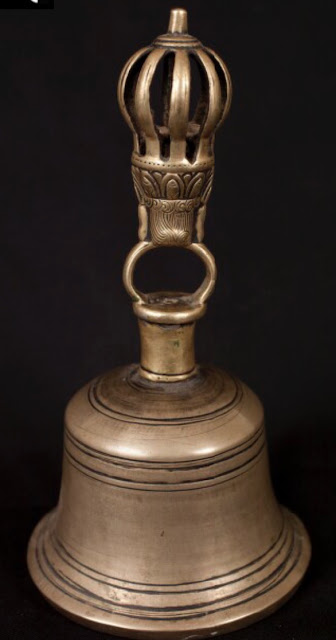 Pay respect to this implement.