Why do we need to perform ritual in continual basis to local spirits? 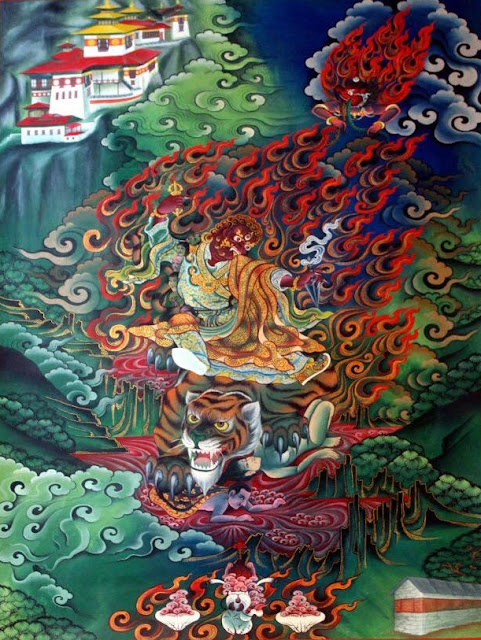 History has it that the Himalayas is totally infested with many types of spirits that either protect or harm the people. They dwell in mountains, lakes, trees, rocks, underground etc.
They are also totally against the spread of Buddhism. When King Trisong Detsen plan to built Tibet's first Buddhist monastery, the spirits didn't allow him to construct. Finally to overcome them King Trisong Detsen invited Guru Rinpoche to Tibet. 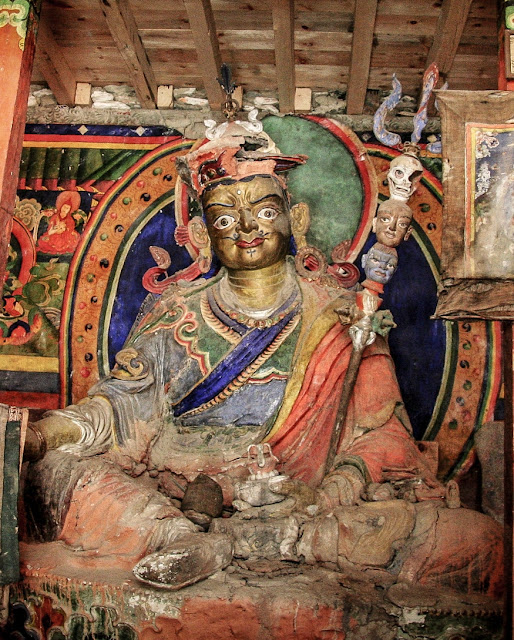 Guru Rinpoche visited Tibet in the 8th century (755–797/804), and coerced these local gods and spirits along with many spirits on the way and made them to accept the power of Buddhism. Hence, elements of the pre-Buddhist religion were incorporated into, or at least made subservient to, the new faith.
Thus, the eight categories of gods and demons became the half-willing protectors of the new Buddhist teachings and sangha. 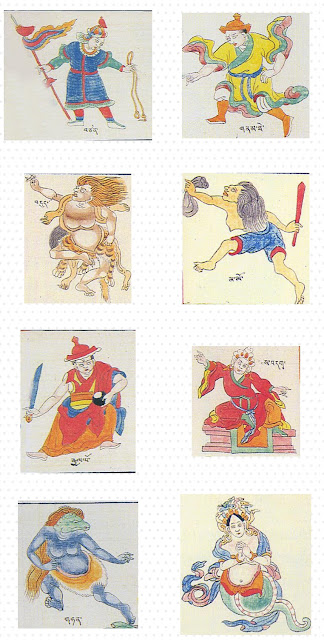 However, it is believed that Guru Rinpoche was not able to perform the ritual subjugation of the gods and spirits three times as he had originally intended.
This means that the gods and spirits are not completely bound to the power of Buddhism and their subjugation needs to be maintained through continual ritual practice, with Guru Rinpoche’s initial subjugation serving as the ritual standard.
Because of this semi-tamed wilderness, spirit inhabitants must be negotiated with in a continuous dialogue between the human and natural world.
These deities symbolize the natural forces of places, tree, mountains, and elements; and the forces connected with the earth are equally connected with the planets and constellations. They are therefore subject to the yearly, monthly, and daily cycles of manifestation and movement. Since humans are in constant contact with the natural environment, they must be vigilant and take care not to disturb these forces if they wish to maintain a harmonious relationship with nature.
When disturbed, these deities are said to be capable of causing bad harvests or provoking disease in humans and their cattle.
Most of these spirits are capable of causing illness or "stealing ones vitality". There are karmic reasons for this: a person who disturbed spirits in a past life, in this one may suffer an illness brought about by spirits.
The circumstances that make such attacks possible are always linked to a loss of vitality is intact; certain spirits will attack the weakest member of that persons family.
A distinction is made between external demons, which cause obstacles external to the practitioner; internal demons, which cause internal sicknesses and disturbances; and secret demons, which are none other than disturbing thoughts. As a general rule, the latter symbolize our neuroses, our unconscious fears, and our spiritual obstacles.
Whenever, we fall sick, we consult astrologer who can tell you which spirit is in play and accordingly ritual are made. But visiting doctor is also equally important.
So beware of these spirits. 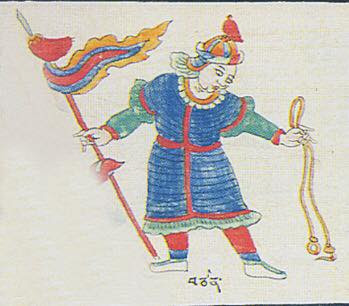 The Tsen, the red spirits that haunt rocks, are all male, the spirits of erring monks of earlier times. When a great practitioner subdues them, the Tsen often become the guardian of temples, shrines, and monasteries. Red offerings are made to them. 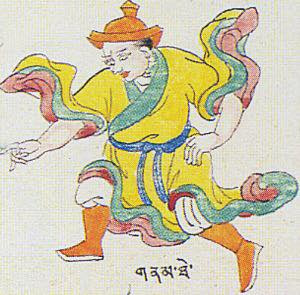 The ZA are malevolent planetary spirits who cause diseases such as epilepsy. Some of them are seasonal: the black Dog in spring, the Dragon-tailed Monster in summer, the Knight on the Black Horse in autumn, and the Phoenix in Winter. Their movements have to be kept in mind and protective diagrams have to be made. 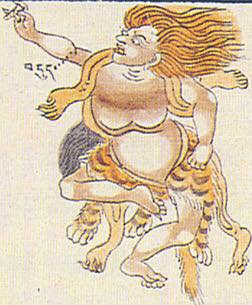 The Dud, (Skt. Mara) are openly malevolent spirits who had been fiercely opposed to the Dharma in their previous lives. They create obstacles for practitioners and live on human flesh. They black in color. 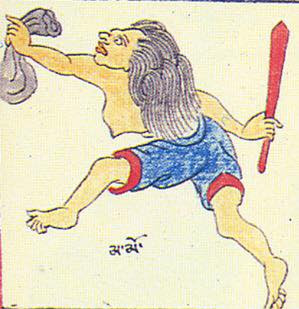 The Mamos constitute a very numerous class of fierce female deities. Although they predate Buddhism, they have been assimilated to the Matrika, a type of sorcerer of the charnel grounds. These black goddesses personify natural forces that become destructive when disturbed. They carry bags full of disease germs and comprise the retinue of the Great Dhar 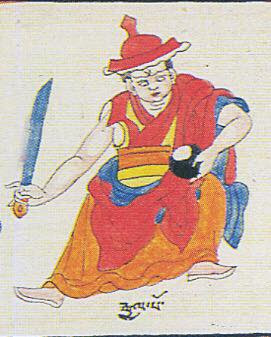 The Gyalpo or "Spirit King" are said to be the spirits of evil kings or high lamas who had broken their vows. They are white in color and often wear armor. They are often local deities of great importance, such as mountain gods. 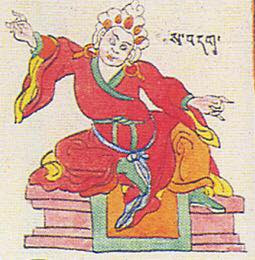 The SADAK are the "Lords of the Earth". They are generally neuter. The SADAK become irritated when their home, the earth is "injured" by earthworks, the digging of wells, or the construction of building. Certain days are therefore indicated as unfavorable for such activities; and before on builds a house or temple, offerings are made to them and their permission is sought to use the site. The SADAk are an important group and are frequently met with in astrology. The SADAK are subject to the annual, seasonal and even daily cycles. While a SADAK is in residence in a particular direction, it will sometimes be necessary to postpone work in that direction or even to cancel a journey. The SADAK have a king, The se, whose body is red. He wears a robe of the same color and holds a large copper Garuda (a mythical bird). He is the chief of the SADAK of the cycle of twelve years. Each year, he occupies the direction of the ruling animal. The king’s retinue comprises numerous deities. Each of these moves throughout the year. All these deities symbolize elemental earth-energies as they enter into relationship with the astrologic 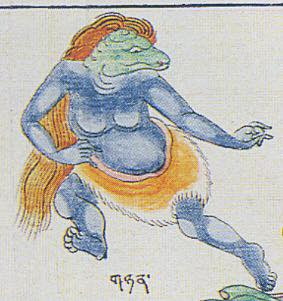 The Nyen are generally malicious spirits who live in the atmosphere or at the surface of the earth, in fields and woods. Many of them live in trees, and it is therefore important not to cut timber on certain day indicated by astrological almanacs. The Nyen are the cause of numerous ailments and certain types of cancer are also attributed to them. They are described as having a cow like form and being yellow or green. 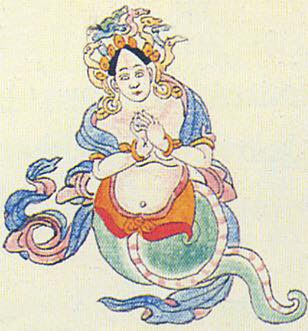 The LU are water deities. There live below the ground, in springs, lakes, and rivers. They are in these sense local deities. However, by reason of their identification with the naga, they are believed to have an underground kingdom at the base of Mount Meru, the axial mountain. Patala is a kingdom filled with wealth, with rich and sumptuous treasures. Their king is Nanda Taksaka (Jogpo), and they are divided into five castes like those of Hindus: the kingly caste, the nobles, the Brahmins, the Vaisya, and the Sudra.

Their bodies are half human, half-snake. In Buddhism, they are considered to be under the authority of Virupaksa, the guardian king of the West. Nagas occur frequently in the history of Buddhism: when the Buddha attained enlightenment under the Bodhi tree at Bodhgaya, the king of the nagas and his subjects protected him from the weather by forming an umbrella over his head; and when the Buddha taught the Prajnaparamita, the teaching on emptiness, on Vultures Peak, the volumes of this teaching are said to have been entrusted to the protection of the nagas.

According to legend, the great master Nagarjuna visited the naga realm and brought the teachings back to reveal them to human king. The naga are often entrusted with termas, treasure texts, attributed to Padmasambhava. In the Tibetan era, the hero Gesar of Ling was born of a naga mother. As local deities, the nagas may be vindictive when their natural environments are disturbed. The pollution of water, the building of dams and dikes, irrigation works, and the diversion of the course of rivers are all acts that may bring about sickness if they are not performed at the astrologically correct time. The nagas are then capable of wreaking vengeance by sending such diseases as leprosy to the responsible humans.