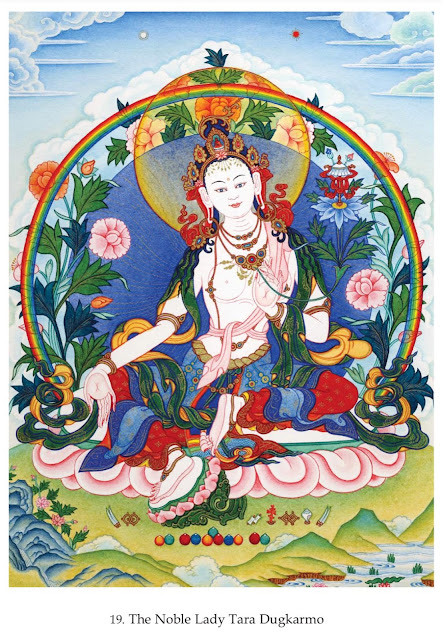 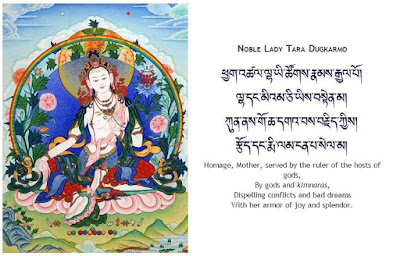 The nineteenth is homage to Mipham Gyalmo, the “Undefeated Queen”, who averts conflicts and bad dreams. She is white and holds a white umbrella.
Indra, Brahma, gods of the desire and form realms, demons and local gods who harm beings, and the gods of mountains, lakes and trees who help beings, honor her without exception.
In general, by the mantra that is blessed by her and the visualization of her body as armor, all conflicts and bad dreams can be averted. In particular, the multi-colored Vajras and the sparkles they emit avert religious and political critics, and make their statements powerless. 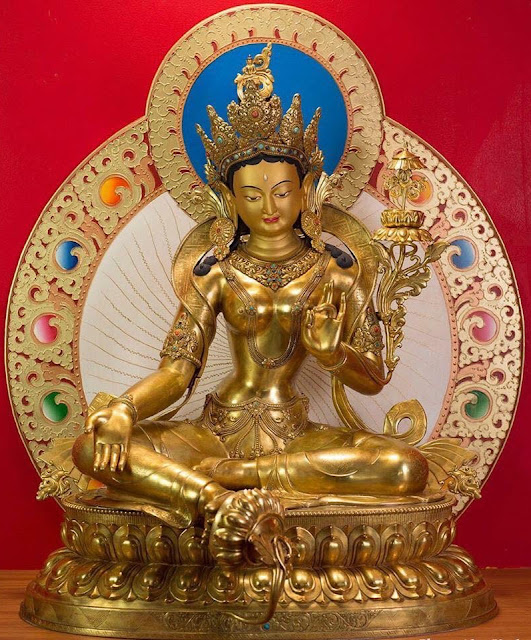 She wears a crown to symbolize honoring lamas as deities, actualization of primordial wisdom, and stabilization of Bodhicitta.
She wears earrings as a sign of refraining from the humiliation of lamas. Her armlets, bracelets, and anklets, six in number, signify that she refrains from killing insects. Her necklaces represent her perfect recitation of mantra. Her belt, lower garments and ornaments indicate that her body is endowed with bodhicitta.
All of her ornaments are like fine armor, whose splendor can avert criticism and the bad dreams caused by the imbalance of the winds, channels and seminal essence. The inner meaning is that by having the karmic wind flow into the Uma, the central channel, the experience of the armor of emptiness is actualized, averting the delusions that cause conflict and bad dreams.
Dugkarmo, white in color, with one face and two arms. She sits in the dismounting posture. Her right hand is in the mudra of supreme charity. Her left hand, in the mudra of the Three Jewels, holds the stem of an Utpala flower.
On its pistil is a white umbrella. Fire, weapons and Vajra sparks emanate from her body, completely destroying hostility towards the dharma, worldly disputes, curses and misuse of mantra power. Her crown symbolizes stabilizing the Bodhicitta at the crown chakra. Her earrings symbolize stopping any denigration of the lama. Her shoulder ornaments, bracelets and anklets symbolize abandonment of killing. Her necklace symbolizes not forgetting the mantra, which protects from clinging to attributes. To bind the Bodhicitta by mudra, she wears a belt.


To cover the lower body, she wears a skirt. These eight ornaments, protecting the practitioner like glorious armor, completely dispel all negative dreams caused by the disturbance of channels, winds and essences. 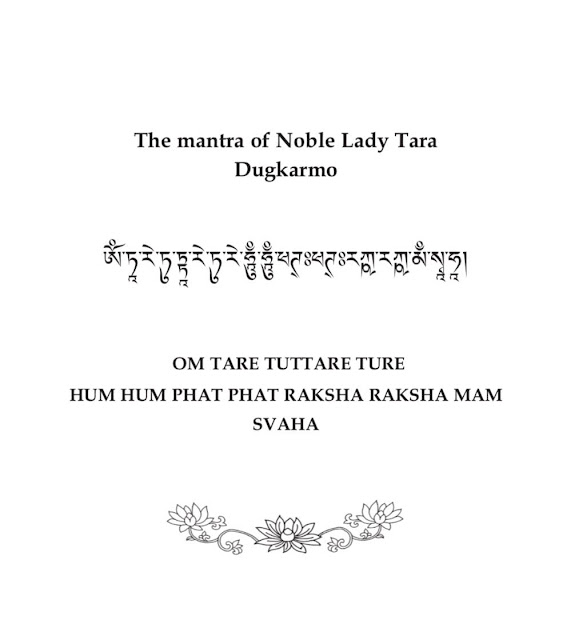 Meditate on this and recite the mantra.
By Phub Dorji Wang at June 09, 2019
Email ThisBlogThis!Share to TwitterShare to FacebookShare to Pinterest
Newer Post Older Post Home