Playing with animals’ life is plying with your own life 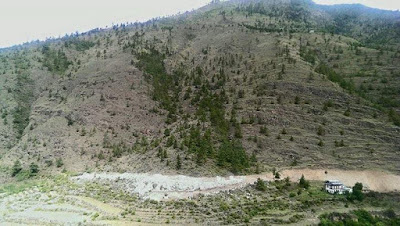 Once in this village across river Wangchu,  between Lamdru and Khasadrapchu, people lived happily because of the constant wealth blessed by the mermaid that dwell in a big lake located just above the village.

People daily used to offer milk, fruits, flowers and rice to the mermaid. In return they received continuous blessing and their wealth was seen growing on daily basis.

People gradually become greedy and thought, offering of fruits and milk has seen such an increase of wealth, why not offer meat so that the blessing and  prosperity would be unmeasurable.

A gathering was held and discussed on meat offering where everyone agreed. From next day the community started offering beef and pork to the mermaid.

Meanwhile the effect of the previous good deed's result still continued and they felt more wealth was coming because of offering meat.

The people in the village then assembled and decided to killed a horse and offered to the mermaid, thus expecting even more.

The mermaid was very angry to such decission of life taking and decided to leave the lake. Further her residence was now become impure because of meats of the innocent animals.

One morning, there was a loud sound from the lake yelling " SHALL I SEND". People thought Woh! the Wealth!! in unison everybody yelled back "PLEASE SEND".

In a fraction of second, the lake burst and whole debris gushed down and the entire village was submerged in the huge volume of mud. All died instantly under suffocation.

So that was the tragedy of being greedy.

You could still see the debris and mark of lake burst. See the image.

Please if you happen to pass by try to have a glimpse of area and think carefully about playing with animal's life. Your life may be the next.