Namkhai Nyinpo Rinpoche and his reincarnations 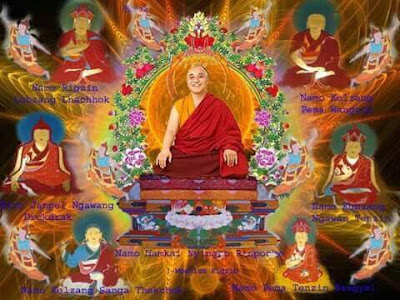 Namkhai Nyingpo is a famous monk and one of the twenty-five chief disciples of Guru Rinpoche. He was the heart son of Guru Rinpoche who became an accomplished siddha through esoteric practice on Vishudha Sadhana the deity of mind. 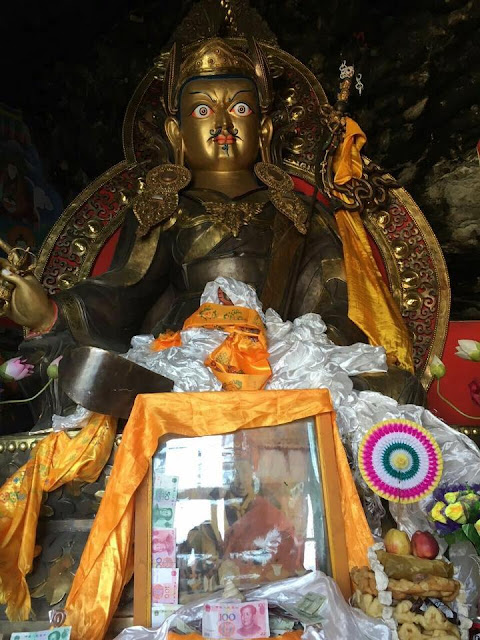 The lineage of His Holiness is continued to the present day through successive reincarnations.
During the 8th century, Trisong Deutsen (790-844) out of his deep desire to make the teachings of the Buddha flourish in the land of snow invited Shantarakshita the Abbot of Nalanda University and a powerful Siddha Guru Rinpoche of the same university to build a monastery at Samye. 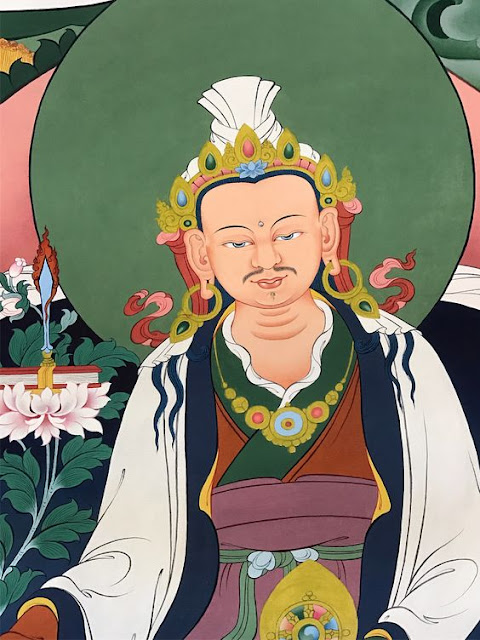 Trisong Deutsen issued an edict that the first five monks ordained by Master Bodhisattva be venerated as supreme beings of respect. Namkhai Nyingpo was one of the first five monks. He received innumerable cycles of ripening empowerment and pith instructions both directly from Guru Rinpoche and Master Bodhisattva. The King had them trained in translation from the Indian languages into Tibetan.
At the command of Trisong Deutsen, an adept translator, travelled to India to receive the Vajrayana teachings of the Secret Mantra from the learned and accomplished Indian siddhas like Rolang Dewa and Kukuradz. The Vajrayana teaching of the Secret Mantra is the pith instructions for attaining the supreme accomplishment of Mahamudra (phyag rgya chen po) in a single lifetime.
Through the power of karmic link, Namkhai Nyingpo received empowerment and essential transmissions from the accomplished Hungkara the Indian Siddha, one of the eight Vidyadharas according to the prophecy. Having bestowed the Empowerment, which is the root of Secret Mantra (gsang sngags), Hungkara gradually opened up the mandalas of the Fifty-Eight Crescent and the nine Crescents.

Namkhai Nyingpo had the vision of Great Glorious One with a consort and attained the supreme and common accomplishment.
Namkhai Nyingpo was exceptionally intelligent and industrious. He possessed great merit to (who) could walk with his feet the width of a hand above the ground that the twenty-eight ishvari goddesses obeyed his command. On receiving the invitation from Dharma King, Namkhai Nyingpo arrived miraculously in Tibet and displayed his power by cutting open his chest with a curved knife of white silver. He showed Trisong Detsen the vision of the forty-two peaceful deities in the upper part of his chest and the fifty-eight heruka deities in the lower part. 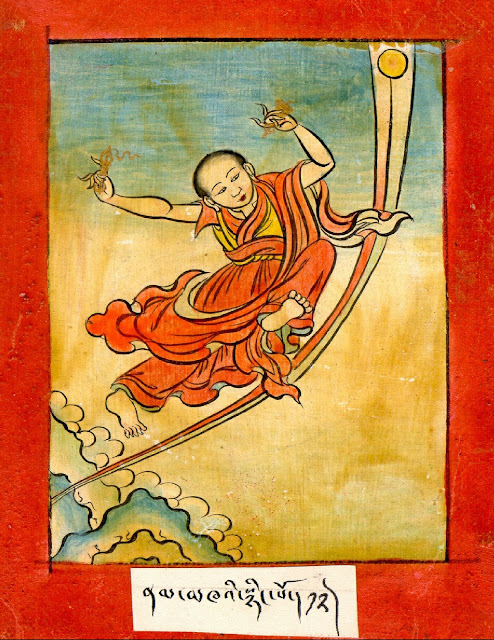 The Dharma King felt confident of such accomplishment that he regarded Namkhai Nyingpo as a supreme object of veneration. From him, Trisong
Detsen received the glorious Vishudha Sadhana teaching. Namkhai Nyingpo was also one of the eight chief recipients of Eight Pronouncements (bka' brgyad of Mandalas), a Sadhana teaching transmitted by Guru Rinpoche at the cave hermitage of Chimphu. The flowers of Namkhai Nyingpo of Nub fell on the mandala of Vashuddha Mind; so this particular tantra was destined to Namkhai Nyingpo through the practice of which he could travel by riding on the rays of the sun. An imprint of his body and foot, which he left, can be seen even to this day. 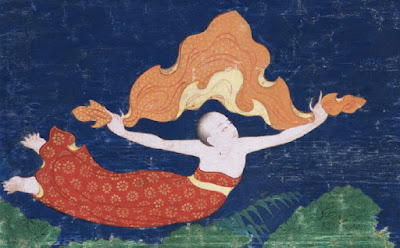 The evil Bon ministers became envious and laid ambush for the lives of the Dharma King and Namkhai Nyingpo. On discovering this plot through his divination Namkhai Nyingpo exclaimed fiercely, HUNG! HUNG! By clapping his hands he struck a lightning bolt from the sky and spun it around the fingertip of his threatening hand gesture. It made some of the evil-minded ministers to faint and speechless while others were paralyzed with fear.
Similarly in another occasion Namkhai Nyingpo revealed his amazing signs of his achievement in occult powers by planting his teak dagger at the boundary between the sunlight and the shade. The sun turned red and disappeared as he later took out the dagger from the boundary of sunlight and shade. He miraculously transformed the boulders and pebbles into grain seeds and then flew in the sky. Delighted with such display of miraculously powers, Trisong Detsen expressed inconceivable gratitude to all the translators and proclaimed excellent Namkhai Nyingpo and Vairocana as his Vajra Masters. 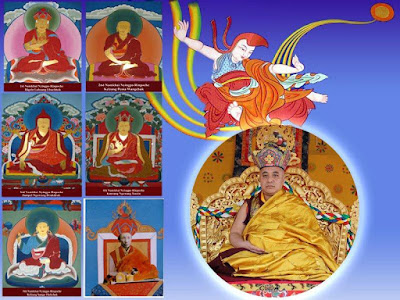 In presence of people from all walks of life the King prostrated before them with unflagging faith and became the most venerated tantric master in Tibet.
Then Namkhai Nyingpo visited upper, middle and lower valleys of Tibet and hid many profound termas for the benefits of future beings. As specifically prophesied by Guru Rinpoche, he brought immense benefits to the sentient beings through many forms of manifestation. While meditating in Spindled Long Cave of Kharchu at Lhodra he had visions of numerous yidams and attained the Vidyadhara (rig 'dzin) level of mahamudra. Finally he departed for celestial realms without leaving a corpse behind.
Namkhai Nyingpo, the crown ornament of all the scholars and siddhas of the land of snows, manifested his enlightened activity as a Terton known as Jangchu Lingpa Palgi Gyaltshen. He then reincarnated as Terton Dawa Gyalchen and revealed Tercho concealed by Guru Rinpoche for the sake of worthy people in future generations.
During the age of degeneration through his karmic destiny and previous aspirations, Namkhai Nyingpo was reborn in 1670 with many amazing signs to Tshewang Ngedup and Logo, as his parents were known in the vicinity of Lhodra Shartsen Drolung, located nearby the seat of Guru Chowang. Even as a little boy of eight he was endowed with astonishing intelligence that the Dalai Lama the Great Fifth recognized him as the direct incarnation of Namkhai Nyingpo. He learned to read and write and developed an understanding of the meaning of the Dharma effortlessly, simply upon exposure to these subjects.
Thereafter, he establishing a permanent seat at Lhodra Kharchu and since then the golden rosary of Namkhai Nyingpo lineage had been passed down in an unbroken transmission. His incarnations have continued to the present and his enlightened activity has spread far and wide. 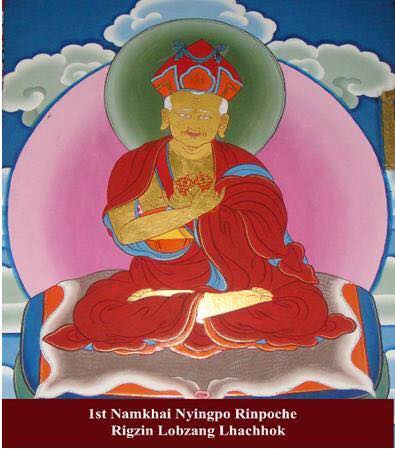 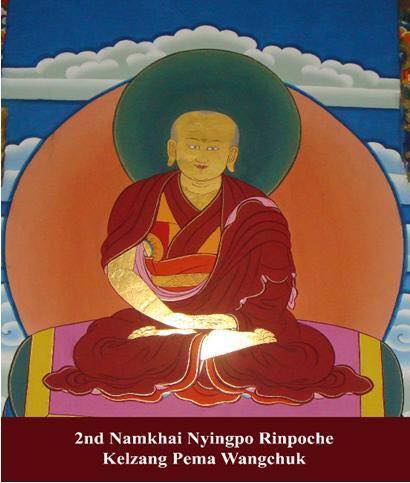 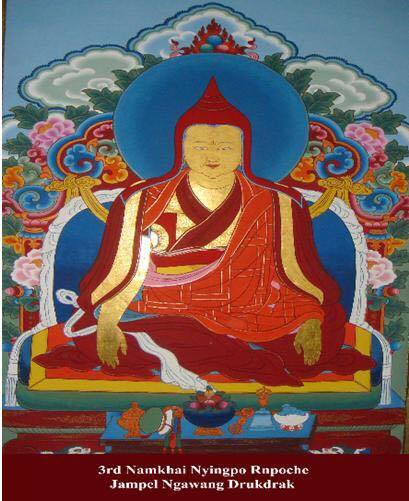 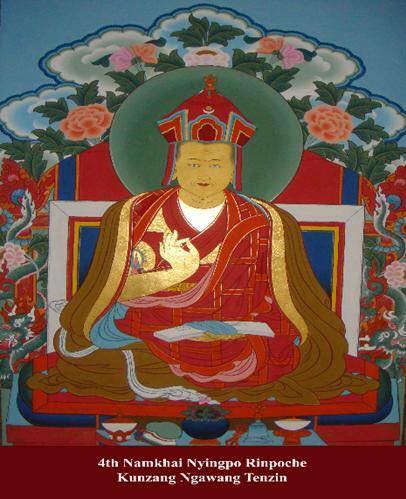 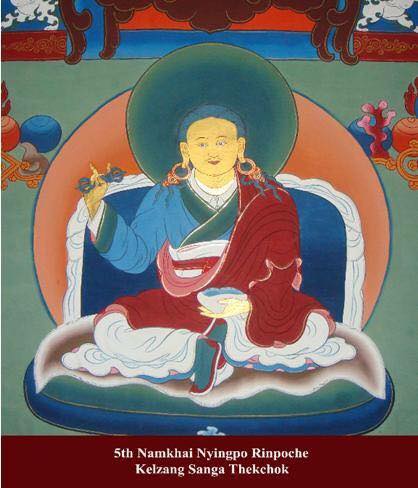 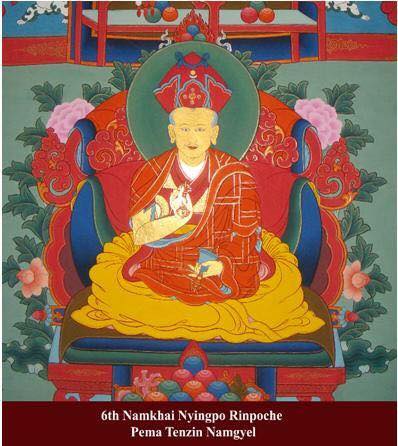 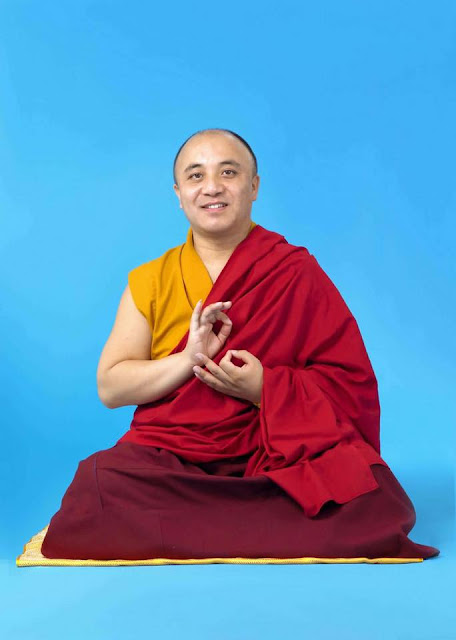 His Eminence the 7th Namkhai Nyingpo was born in 1966 at holy valley of Tongshang Thrichu Geonpa, Eastern Bhutan to Yab Tshering Gyaltshen and Yum Sherabmo. His birth was accompanied by many auspicious and wonderful signs such as appearing of spectacular rainbow in the sky, showering of exquisite flowers and turning steam water into milky colour. The first word His Eminence (H.E.) uttered were “Kharchu”, “Kharchu” which referred to his monastery in Tibet. His Eminence vividly remembered the names of his old attendants and many related incidents from his previous life. 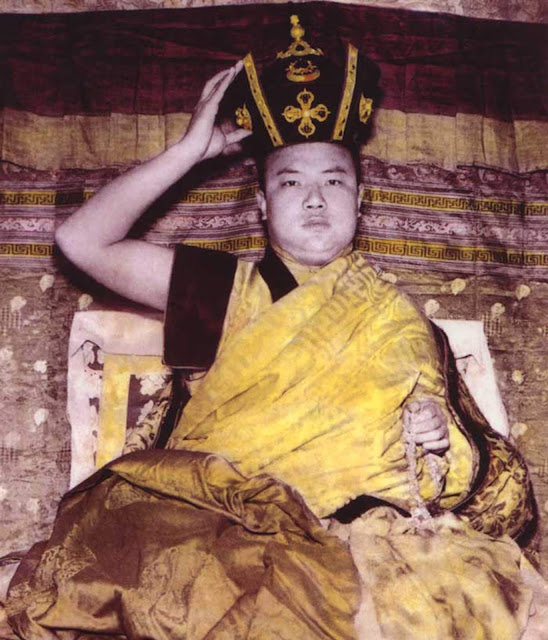 His Holiness, 16th Gyalwa Karmapa recognized the boy as 7th Namkhai Nyingpo. In HH Karmapa’s prediction, the names of the parents and other details of Rinpoche’s rebirth were described clearly. Further to re-confirm the recognition of Tulku, the disciples and the royal government of Bhutan examined the child in a traditional manner. The examination involved various methods such as showing of various rosaries, reliquaries, bells and vajras amongst which some belonging to the previous Namkhai Nyingpo. The child unerringly chose the objects only belonging to his predecessor. This process was witnessed by the representative of the Royal Government of Bhutan and senior disciples of his predecessor. Thus, it was doubly re-confirmed the rightful recognition of Tulku incarnation. 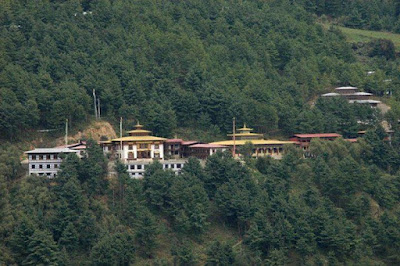 In 1972, at the age of six, His Eminence ascended to throne at the Pema Shedrup Chholing, the 2nd Kharchu Monastery in Bumthang. His Eminence’s formal education began as early as 1970. The basic reading and writing skills were picked up instantly and had a natural ability to read, write and memorize essential prayers effortlessly.
At the age of eight, His Eminence received the refuge Ordination and received the Long Life Empowerment from His Holiness, the 16th Gyalwa Karmapa on two occasions. In the same year, His Eminence received the Kalachakra Empowerment, teachings on the Bodhicharyavatra and many other major teachings from His Holiness, the 14th Dalai Lama. 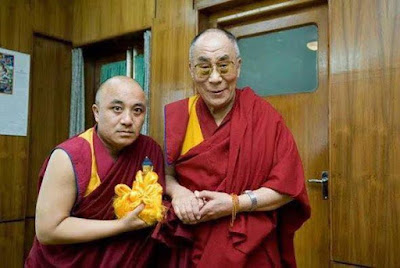 In accordance with the instructions of His Holiness Dilgo Khentse Dorji Chang, His Eminence studied complete thirteen great texts and commentaries from Khen Rinpoche Kunga Wangchuk. He also received the teachings on BLabTue; the entire three parts of Kamala Shila’s meditation practice, Bimalai Ba-dang Chigcharwa; Dakpo Thargyen and Drubthab Kintue. This made His Eminence as one of the great sutra masters of our time. 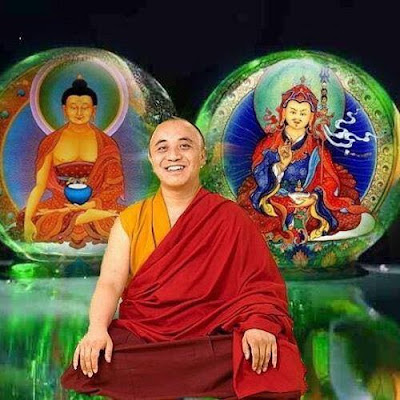 His Eminence Namkhai Nyingpo Rinpoche continued his intensive study of Buddhist philosophy with many masters. In the spirit of non-sectarianism, His Eminence has received teachings and transmissions from the four major schools of Tibetan Buddhism. H.E has also transmitted his own special lineage JangTer (Northern Treasures) teachings to other Lamas and Rinpoches.
His Holiness Namkhai Nyingpo Rinpoche’s  Zabten is given below: 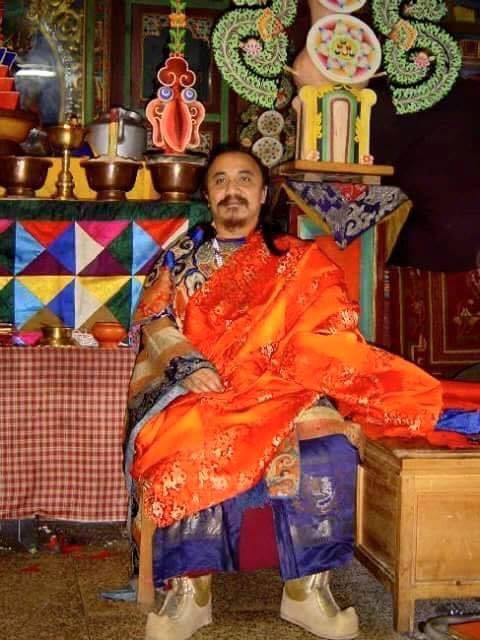