Ula Chodril Thangkha Lhakhang. (All statues in the monastery were built from the sacred sand brought from Lhasa, Tibet by Tulku Chokden Gonpo)

Terchen Dorje Lingpa’s first reincarnation Tulku Chokden Gonpo (1497-1557) founded this temple in 15th century. It is located on the upper reaches of the village of Ula under Wangdue Phordang Dzongkhang.

It is said that Tulku Choken Gonpo wanted to build monastery in Bhutan. In order to select a good site he had released an arrow and a white conch from Tibet to Bhutan with a plan to build monastery on the place where his conch lands. Few weeks later when he personally came to look for the items, he had reached Ula village and met an old man.  When Tulku enquired whether he had seen anything nearby, the old man replied that he had not seen anything other than an arrow on a stone, which he could not take out. Tulku knew that it was his arrow and follow the old man who showed him the same.
Tulku was glad and than searched for the conch which he found at the bottom of the village on a stone. While the conch landed on a good location on top of cliff that spans down to Punatsangchu, Tulku felt constructing monastery below the village was not a good idea. Without deciding the location Tulku left for Tibet.
In Tibet, Tulku was a well-known lama and was highly revered. One-day a businessman called Norbu Zangpo invited Tulku to conduct some religious kurim and at the end of the programme offered some goods, which Tulku categorically refused. Norbu Zangpo was bit upset and enquired why Tulku was not accepting his offerings or whether the offering was too little for him to accept. If that was the case he pleaded Tulku that he will offer more. Tulku replied that he don’t want any offering, however, if he insists he would request a favor since he has many horses to reach sand from Lhasa to Bhutan as he had decided to construct one monastery there. Tsongpoen Norbu Zangpo was delighted and gladly accepted and reached 100 mules’ loads of sand to Ula Bhutan.

Tulku was very happy for his prompt acceptance and later released a Chodril to Ula to decide the monastery location and it landed between the conch and the arrow. Tulku than constructed the monastery on the location where his Chodril landed in a single day by the divinely emanated artisans, god, and demons. It is said that the Nagas of the lower direction offered the seat of the statues. He named the monastery as Chodril Thangkha Lhakhang.
I have visited this sacred monastery during Zhabdrung Kouchoe and received immense blessing from the scared nagtens. The original monastery, which was behind the new extension that was made on the front to create space for performing religious activities, was typical type of monastery.

The moment I stepped inside I was totally taken to a completely new type of monastery with huge statues place in a circular position. The main center figure is Buddha Shakyamuni (སངས་རྒྱས་ཤཱཀྱ་ཐུབ་པ་),

on the right is Buddha Dipaṃkara (མར་མེ་མཛད་) and left is Maitreya Buddha (བྱམས་པ་མགོན་པོ་) On the right side of Buddha Dipamkara is Guru Rinpoche with Khandro Yeshey Tshogyal and Khandro Medrarawa.On the left side of Maitreya Buddha is Chenrigzig (Avalokitshera).  To safeguard this sacred statues are two fearful deity Chana Dorje and Guru Drakpo facing the altar.All these statues were made with sacred sand brought from Lhasa.
This is a very special and sacred monastery of Terchen Dorje Lingpa’s linage and one must visit to feel the sacredness of the statues. All statues look wonderful as if  they are going to speak. It is too beautiful to narrate in detail here. I have spent some time inside to glance all statues with great reverence. 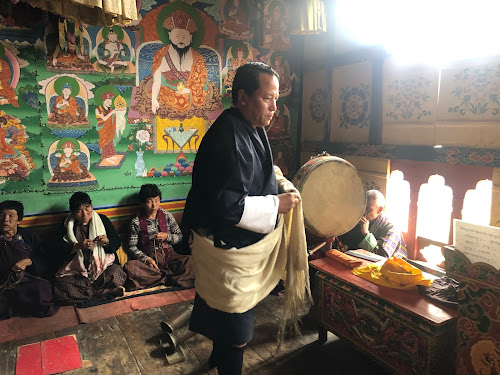 Please make a point to visit this sacred monastery. You will not be disappointed. You will be taken to a different experience of a monastery from the usual set up that you see time and again. 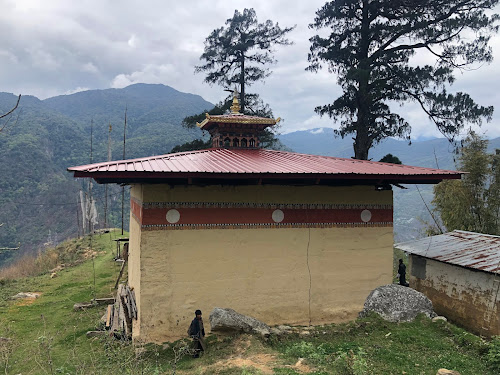