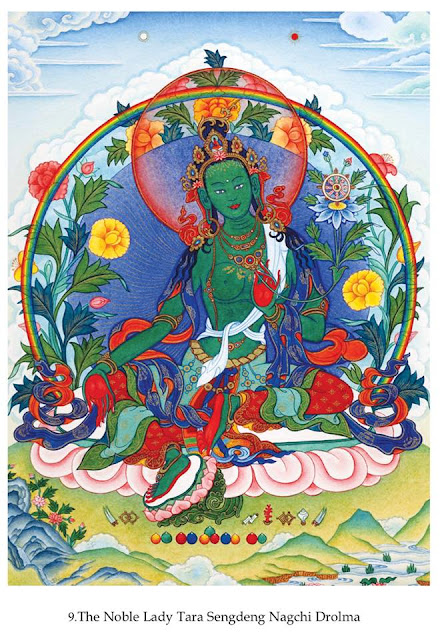 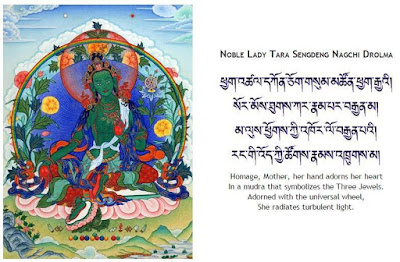 The ninth praise is homage to Sengdeng Nagi Drolma,Tib the “Tara of the Teak wood Forest” who protects from all kinds of fears.
Her color is dark green, with the dazzling radiance of emeralds. Her right hand is in the boon-giving mudra, and the thumb and ring finger of her left hand holds a blue lotus engraved with a wheel. Her remaining fingers are held gracefully upright at her heart in the mudra symbolizing the Triple Gem.

The swirling wheel of light, (a metaphor for protection) adorns her like the finest of garments, and it protects like a shield against all torments. Likewise, all beings of the world in ten directions are protected from all kinds of fears by the all-pervasive light that beams from her body, clearing their fears in a display of extraordinary radiance.

The eight kinds of fears are:
1 The fear of elephants represents the power of ignorance. When ignorance grows strong, one ignores the law of cause and effect, indulges in alcohol, (here the use of alcohol is a symbolic of wrong view) and becomes crazy.
2. The fear of iron chains symbolizes habituation to lust and desire that bind together the senses and their objects.
3. The fear of pishaca demons signifies the doubt that steals the life force of nirvana, as it moves in the sky of ignorance, and the doubt that harms the understanding of ultimate meanings.
4. The fear of rivers (floods) is a symbol of desire, acting savagely. By the possession of spirits, the current of desire carries beings towards samsara in its tumultuous waves of birth, sick, aging and death caused by karmic wind.
5. The fear of fire represents the power of anger that burns the forest of virtue. Anger is the cause of anxiety, which in turn causes quarrels, disputes, and partialities.
6. The fear of robbery corresponds to the wrong views that steal the treasure of the supreme goal. This causes one to wander aimlessly in the barren ground of wrong view, (and to) believe in extremes and low ascetic practices.
7. The fear of reptiles represents jealousy, the poison of intolerance of another person’s prosperity. Jealousy results in everything becoming a cause for agitation.
8. The fear of lions. Signifies pride, the conceit of holding high ones own views and conduct. Pride causes one to (metaphorically) develop claws as sharp as a lion’s to belittle others.
These and their casual factors are the eight fears. 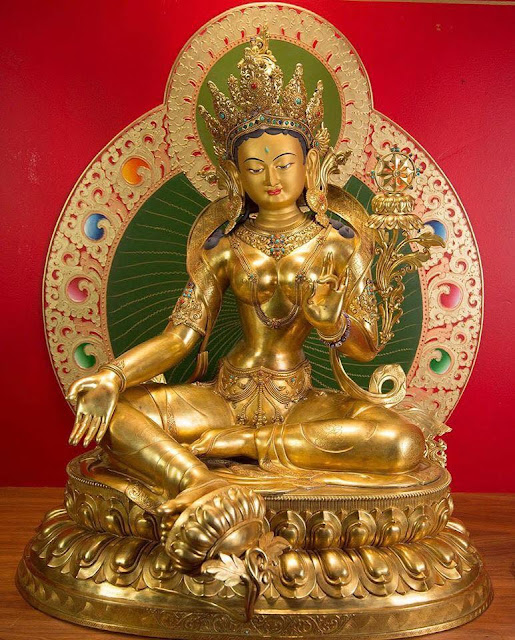 Homage is paid to the lady who protects us from these two sets of fears. The inner meaning is that her wheel of the three primordial wisdom-minds, (the wisdom-minds of emptiness, clarity and compassion, illustrated by the mudra symbolizing the Triple Gem) eliminates the nine bonds and other afflictions, which is a cause for accomplishing the fearless vajra of self-cognized luminosity.

On the throne of a lotus and moon appears Noble Lady Tara Sengdeng Nagchi Drolma with one face and two arms. Her color is blue-green like an emerald. She radiates turbulent light. She sits in the dismounting posture. Her right hand is in the mudra of supreme charity. Her left hand, in the mudra of the Three Jewels, holds the stem of an utpala flower, which blooms at her ear. On its pistil is a universal wheel, blazing with turbulent light. 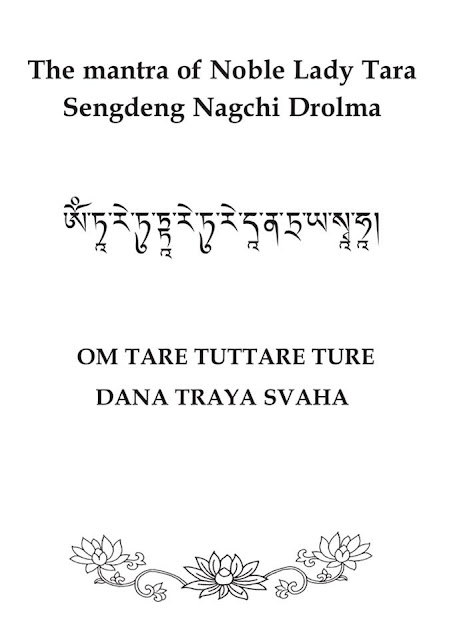 Beams of light radiating from her body and the wheel protect from all adversity, harm and obstacles of samsara led by the twofold eight terrors.
Meditate on this and recite the mantra.